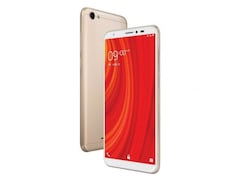 Lava Z61 smartphone was launched in July 2018. The phone comes with a 5.45-inch touchscreen display and an aspect ratio of 18:9. Lava Z61 is powered by a 1.5GHz quad-core processor. It comes with 1GB of RAM. The Lava Z61 runs Android Oreo (Go edition) and is powered by a 3000mAh battery.

As far as the cameras are concerned, the Lava Z61 on the rear packs 8-megapixel camera. The rear camera setup has autofocus. It sports a 5-megapixel camera on the front for selfies.

Lava Z61 is based on Android Oreo (Go edition) and packs 16GB of inbuilt storage. It was launched in Black and Gold colours.

Connectivity options on the Lava Z61 include Wi-Fi and GPS. Sensors on the phone include accelerometer and proximity sensor.