The WD Black SD750 SSD blends looks and performance, but not everyone will be able to make the most of it

Western Digital began a major push into the SSD market in 2016. The company recognised that users were moving away from spinning hard drives but that the WD brand was still very highly regarded among PC enthusiasts and DIY builders. The company bought SanDisk to leverage its expertise in flash storage, and has enjoyed some success though competition is fierce. The WD Green, Blue, and Black hard drive performance tiers have been translated to the SSD market, forming a family of entry-level, mainstream, and enthusiast-grade products. Not all of them have been hits, but the company has kept improving.

We're reviewing WD's third-generation Black SSD, which is called the WD Black SN750. This is the company's latest offering for the high-end gaming and enthusiast market. This model was introduced internationally in January, though it has only just been launched officially in India.

With prices having fallen drastically this past year, SSDs are more attractive than ever, and even high-end, high-capacity models are not out of reach. Let's see if WD can take on the might of Samsung, Kingston, Adata, and the other players in the Indian market.

Design isn't usually something that we need to talk about with an SSD, especially high-end ones that are now nearly exclusively sold as tiny M.2 modules. However what we see in this case is that WD is really playing up its brand identity, and everything from the packaging to the labels to the product itself is very slick.

While M.2 modules are tiny and hard to customise, the WD Black SN750 is sold with and without a pre-attached heatsink. We're reviewing the version with the heatsink, and this is where WD has had the chance to express itself. The device as a whole is surprisingly chunky, with the circuit board completely encased in metal.

The diagonal ridged pattern matches what we've seen on previous WD products and looks very high-end. It's anodized black but the tips of the ridges are bevelled off, exposing contrasting raw metal which catches the light at certain angles. This is a surprising amount of attention to detail for a component that will very likely be hidden away for the entirety of its useful life.

The heatsink has been designed in association with EK Water Blocks, a company well known in enthusiast circles for its high-end after-market liquid cooling solutions. WD says it lets the SSD sustain its high read and write speeds for longer, and points out that this is particularly important for gamers as game sizes keep ballooning.

If you're buying this version of the WD Black SN750, you should check very carefully whether it will fit in your PC. A lot of high-end motherboards have their own M.2 slot heatsinks, or don't have so much Z-height clearance. The unit is 8.1mm thick, as opposed to 2.38mm for standard M.2 SSDs, so it definitely isn't an option for upgrading a laptop with. WD says it does not recommend separating the drive and heatsink.

When we installed the drive in our test bench's primary M.2 slot, we found that our double-wide graphics card was resting on top of it. This obviously isn't ideal for airflow and heat dissipation. WD has published a list on its website of six motherboards that this SSD will not fit into and another 19 that will need to have their own heatsinks removed. 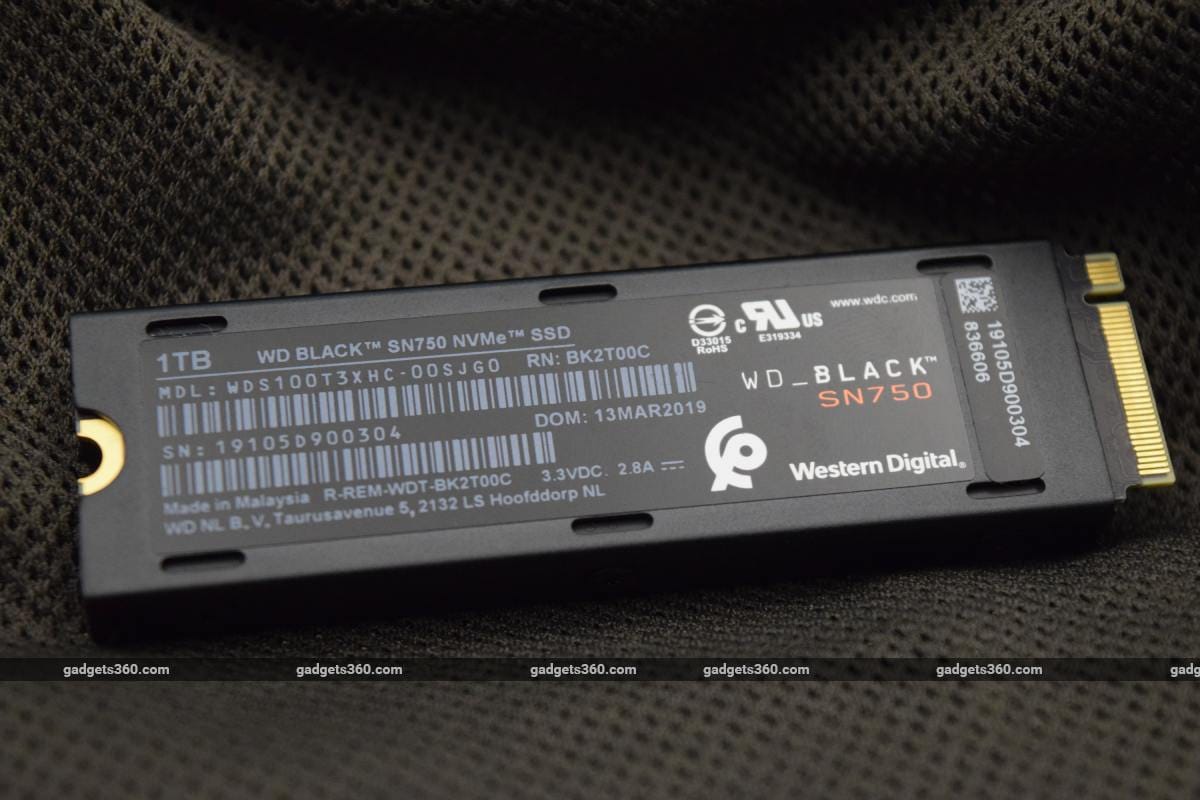 The new WD Black SN750 SSD has been launched in capacities ranging from 250GB to 2TB, and all but the 250GB version will also be available with the heatsink. It uses four PCIe 3.0 lanes, which is the current standard, but enthusiasts will want to keep an eye on PCIe 4.0 SSDs which have already been demonstrated and will begin shipping this year.

WD has used its own 64-layer 3D NAND and a controller developed in-house, but it doesn't provide any information about these. As for the usual metrics, WD's rated sequential read and write speeds start at 3100MBps and 1600MBps respectively for the 250GB version and range up to 3,470MBps and and 3000MBps respectively for the 1TB version. The rated speeds for the 2TB version are slightly lower, which is unusual.

Endurance, measured in Terabytes Written (TBW), scales from 200TBW for the 250GB model to 1200 for the 2TB one. There's no mention of drive encryption in the official spec sheet, which is unfortunate. The warranty is five years.

Another feature that tells us exactly who this product is aimed at is the Gamer Mode in WD's SSD Dashboard software. In this mode, power saving features are disabled so that there's no drop in performance. WD offers buyers a free copy of Acronis True Image, but oddly there's no mention or sign of it on the product's website or packaging. 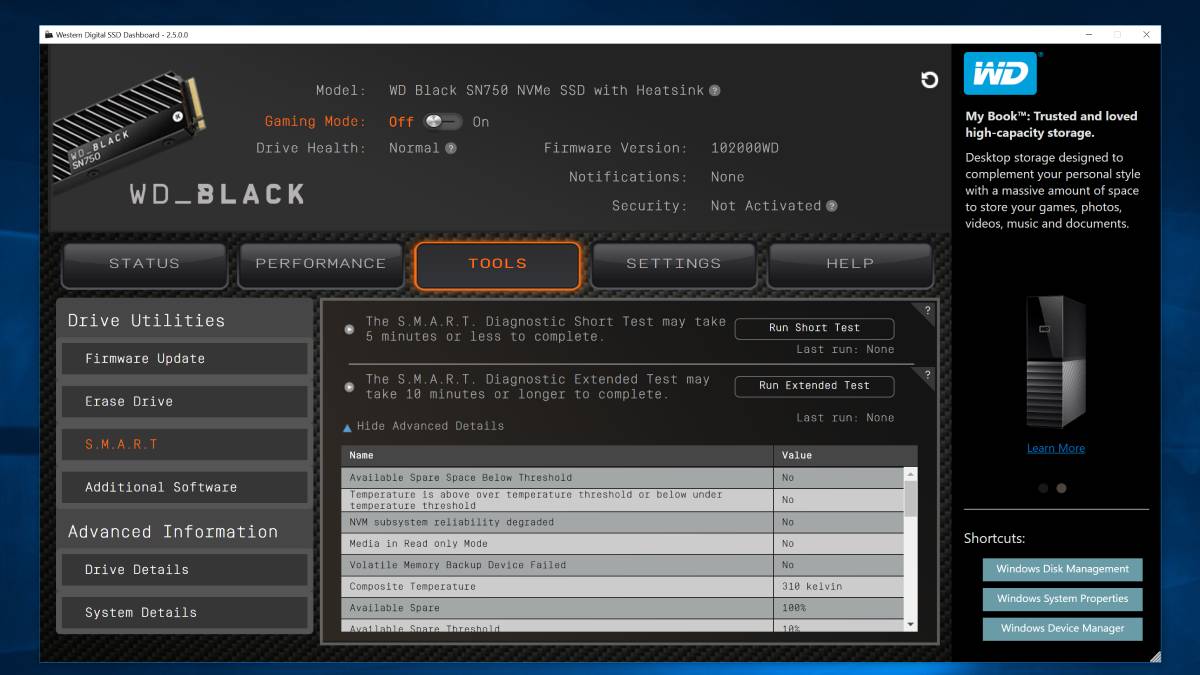 For this review, we have the 1TB version of the WD Black SN750 with the heatsink. We should note that this version is the best performing of all its siblings. The performance scores below do not apply to other capacities, and the heatsink could have an effect on sustained performance so the naked 1TB version might perform a little differently as well.

Interestingly, our Gigabyte motherboard is one of the models listed as “partial fit” by WD. This model has small heatsinks over each M.2 slot which are easy to remove. We noticed the Asus Maximus XI Extreme, which we've used before, listed as “does not fit”. This board has a far more elaborate multi-slot heatsink with integrated lighting effects, and you can't just leave it off.

Next, the Anvil benchmark gave us 5,995.02 points for reads and 6,688.75 points for writes. The overall score in its comprehensive test was 12,643.77. What we see here is a good balance between read and write performance. The new WD Black SN750 is an incremental improvement over its predecessor, the WD Black NVMe SSD (2018), and trades blows with the Samsung SSD 970 Evo Plus.

WD's SSD Dashboard software has a special black skin for the new WD Black SN750 SSD. It shows the drive's free capacity, diagnostics, and temperature. There's a real-time performance monitor and tools for checking drive health, erasing it securely, and updating its firmware. Sadly, the software still shows ads for other WD products. You can also get a free copy of Acronis True Image (WD Edition) to back up or clone one drive to another, which could come in handy when upgrading. 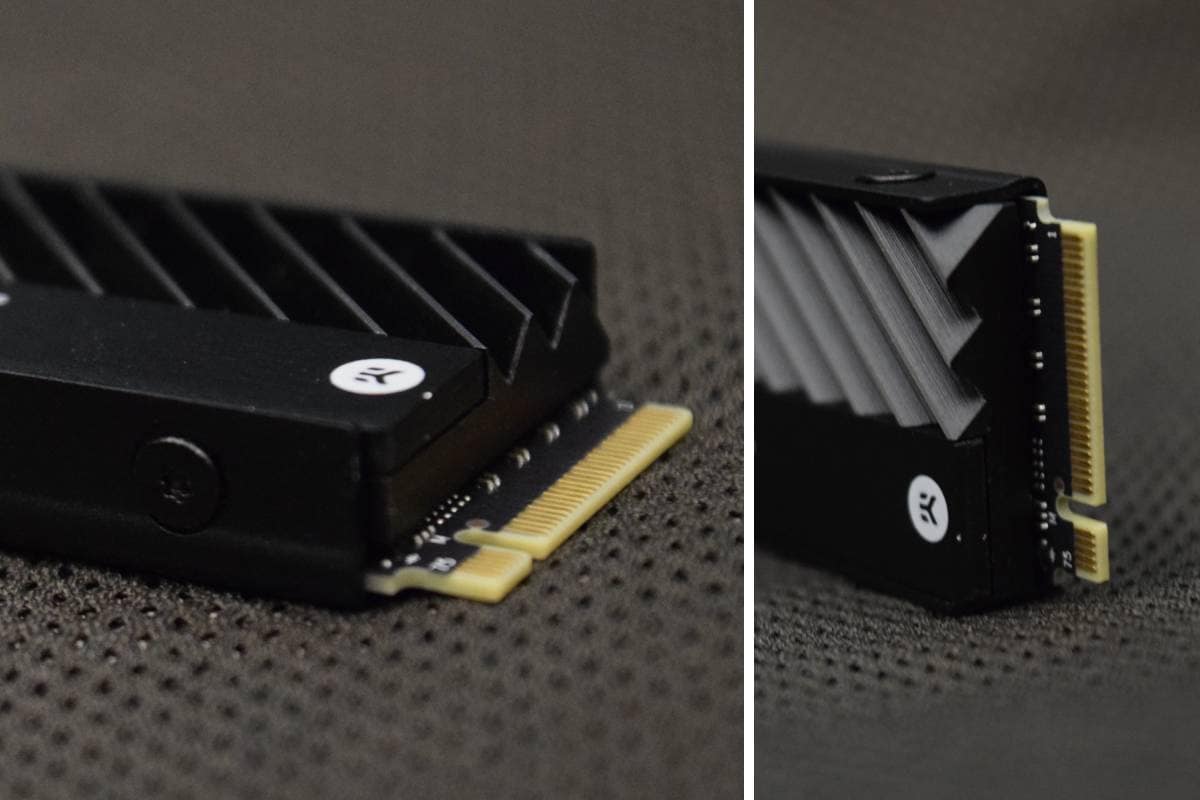 Verdict
WD has married design with function in the WD Black SN750 SSD. However, potential buyers should absolutely make certain whether their motherboards can handle the bulky heatsink-clad version of this drive. We'd also suggest making sure that there's adequate airflow over the surface of the heatsink.

Performance is great, and buyers will be more than happy with this SSD. It's a solid alternative to the Samsung SSD 970 Evo Plus, but if you can find the previous-gen WD Black NVMe SSD at a good price, you should definitely consider it as well.

Speaking of price, WD has only just officially launched the 1TB WD Black SN750 SSD with heatsink for an insane Rs. 50,000 (the MRP printed on the box), but it has been available for sale for some time now at a much more reasonable Rs. 23,199. WD officially points buyers to Amazon.in, where it is listed for Rs. 29,490. You should definitely not be paying more than this. The 1TB model without the heatsink goes for Rs. 21,500 or Rs. 23,999 on Amazon.in.

These prices are lower than what the equivalent previous-gen 1TB WD Black NVMe SSD was selling for when we reviewed it in January this year. We expect SSD prices to continue to fall all of this year, so 1TB isn't too expensive for enthusiasts anymore.