WD's new portable SSD is an entry-level option for those who want to ditch spinning hard drives.

External SSDs have been falling in price and are now becoming viable options for everyday PC and laptop users. Of course you don't get anywhere near the same capacity as you would with a spinning hard drive at each price point, but it's hard to argue with the convenience, durability, and speed that SSDs offer. More importantly, consumers are becoming more aware of this product category and are showing that they're willing to make the tradeoff, just as they have with their desktops and laptops. Western Digital is catering to this growing market with multiple products under its WD, SanDisk, and G-Technology brands. The product that we're reviewing today is the relatively affordable 500GB WD My Passport Go.

This portable SSD is designed to be tough enough to withstand harsh usage conditions. That could make it a great tool for creative professionals who work in the field a lot, or for those who travel a lot. Let's see how the WD My Passport Go is different from other products, and whether it's your best choice. 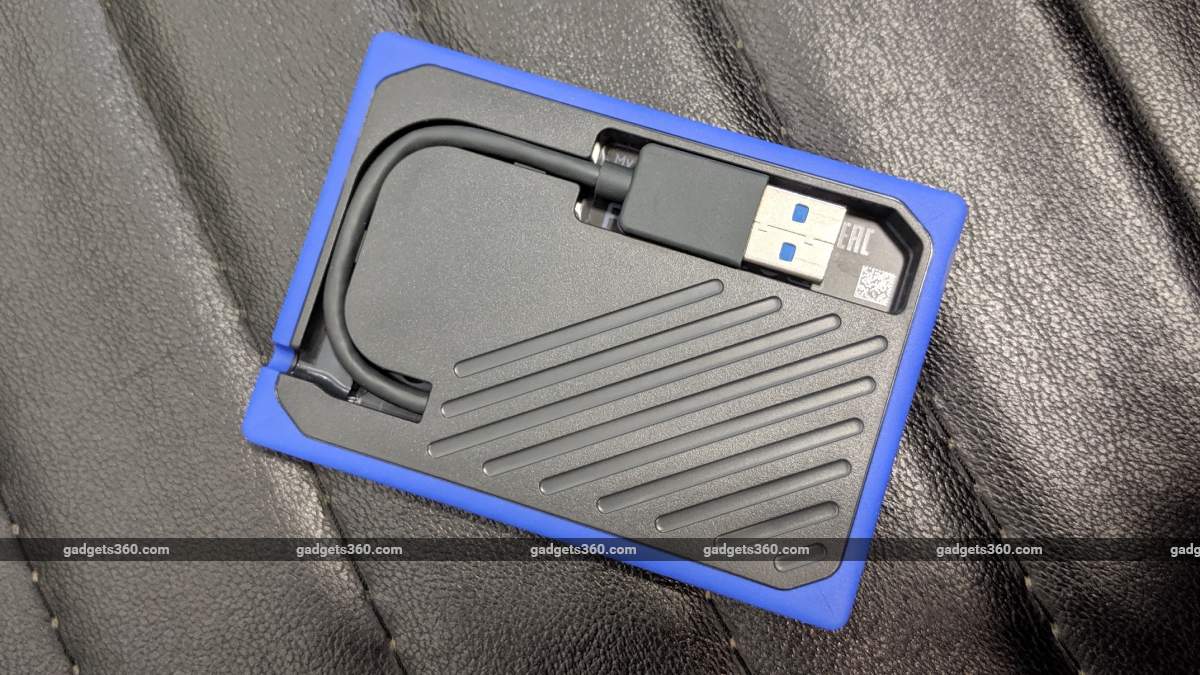 We have previously reviewed the WD My Passport SSD, which has a slick, premium black-and-silver look. The new My Passport Go is completely different, with a grey plastic body and a bright trim – you can choose between Cobalt and Amber. Unlike the typical squat or oblong shapes of most portable SSDs, this one looks just like a shrunken portable hard drive. It's only slightly wider and longer than a credit card, and about as thick as a smartphone.

The reason for this is the My Passport Go's most distinctive feature, a cutout on the bottom for the attached USB cable. While this effectively doubles the size that the body actually needs to be, it means that you never have to worry about losing or forgetting the cable somewhere.

Even with the integrated cable, the My Passport Go is extremely pocketable and weighs just 55g. The cable is not very long, which is fine for laptops but means that the drive will have to dangle from the USB ports on most desktop PCs. Many will find this convenient, but of course you can't swap out the USB Type-A cable with a Type-C one like you can with most other portable SSDs, and an adapter is not included.

Although the My Passport Go is advertised as a rugged drive and designed to look the part, most of its benefits are common to all SSDs. It is billed as being drop resistant to up to 2m, but so is the class-leading Samsung SSD T5, and WD's own My Passport SSD claims virtually the same at 1.98m. Also unlike sister company G-Technology's G-Drive Mobile SSD, there are no specific claims of resilience against shock, vibrations, or crush loads. There's also no IP rating for protection against water or dust ingress.

Still, compared to any hard drive with spinning parts, the My Passport Go is arguably tougher and far less likely to suffer physical failure if used while traveling and working outdoors. It will of course also be faster and easier to carry around.

The only capacity options are 500GB and 1TB. In terms of performance claims, WD advertises speeds of up to 400MBps, which refers to the best case scenario for sequential reads and is lower than the 540MBps claimed by the My Passport SSD. This is a standard USB 3.0 drive and should work with Windows and macOS out of the box. There's no mention of hardware encryption. WD includes some software on the drive itself – WD Discovery on the drive itself, as well as WD Backup and WD Drive Utilities which you can download – and we'll discuss these later. The warranty is three years. 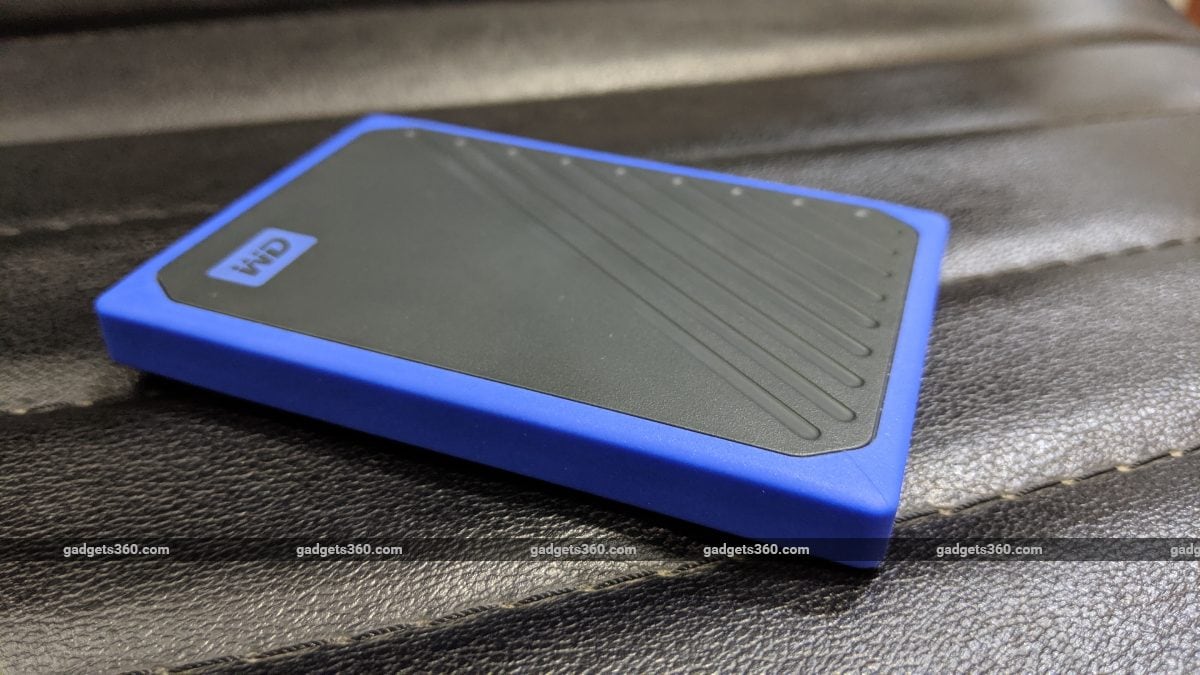 We plugged the WD My Passport Go into our standard test bench, which is configured with an AMD Ryzen 7 2700X CPU, a Gigabyte Aorus X470 Gaming 7 Wifi motherboard, 2x8GB of G.skill DDR4 RAM, a 1TB Samsung SSD 860 Evo boot drive, a Sapphire Nitro+ Radeon RX 590 graphics card, and a Corsair RM650 power supply. Windows 10 reported the formatted capacity of our 500GB review unit as 465.76GB, and the default file system as ExFAT.

We fired up the trusty CrystalDiskMark 6 benchmark to verify WD's performance claims. Unfortuantely, we were not able to record above 312.1MBps sequential reads and 117.2MBps sequential writes, which was quite surprising. Most SSDs live up to their manufacturers' claims, and 400MBps was already below standard for this segment. Real-world performance is better reflected by random read and write speeds, and we got 52.05MBps and 6.62MBps respectively, which is also not great. There seemed to be no difference between queue depths of 8 and 32, as the test scores were very similar.

The Anvil synthetic benchmark gave us read and write scores of 943.35 and 300.48 respectively, for a total of 1,243.84. These scores are all well below those of other portable SSDs that we have tested.

WD's included Discovery software is not really necessary, but if you want to install it, you'll be able to do things like copy content from your social media or cloud storage accounts to a WD drive, but it stays running all the time and shows plenty of promotional messages. Drive Utilities lets you check your WD drive's health, update its firmware, and erase its contents securely.

WD Backup works only on Windows and lets you create basic schedules and backup sets. If you're using a Mac, Time Machine will work but you'll have to reformat the drive (or at least part of it). 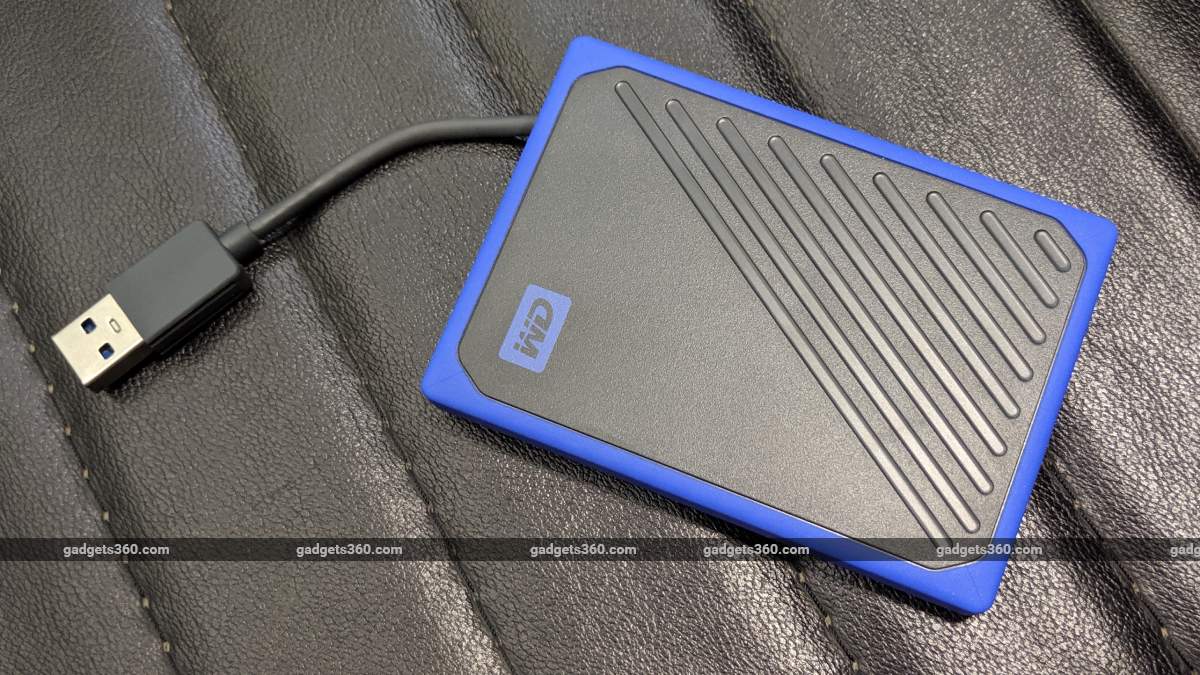 In terms of looks, features, and performance, the WD My Passport Go is an entry-level offering, and has clearly been positioned below its faster and slicker counterpart, the WD My Passport SSD. It definitely is faster and more convenient, and more resilient to physical damage than a portable hard drive, but that applies to all SSDs. The one feature that a lot of people will like it for is the integrated USB cable, but we do wish that a USB Type-C adapter had been included.

This means that pricing will be a huge factor when considering whether to live with the My Passport Go's compromises or choose a more premium option instead. Keep in mind that prices do tend to fluctuate a lot, and with their growing popularity, portable SSDs are now often found at tempting discounts during online sales.

The 500GB and 1TB versions of the My Passport Go are officially priced at Rs. 14,500 and Rs. 29,500 respectively but currently sell for around Rs. 6,299 and Rs. 11,999 respectively. However, SSD prices overall have come down drastically this year, and there are plenty of other options at around these prices or even lower. The excellent Samsung SSD T5 and the Seagate Fast SSD both outperform this drive and have been seen selling for under Rs. 6,000 for 500GB.

If you can find the My Passport Go SSD selling for significantly less than these other models, and if you're okay with entry-level performance, you can go for it. With current prices though, it isn't the best use of your money.