It's impossible to ignore the performance benefits of using an SSD rather than a traditional spinning hard drive. While laptop buyers are at the mercy of big brands that often cut corners, those who choose to build their own desktop PCs have very little reason not to buy an SSD. Even if it's a relatively low-capacity one just for Windows and essential software, there's room for an SSD at nearly every budget level.

WD knows which way the tide is turning, and is trying to make sure that DIY PC builders and enthusiasts don't abandon it entirely as they move away from hard drives. The company acquired SanDisk over a year ago and more recently made a bid to acquire Toshiba's flash memory business, but still chooses to sell SSDs under its own brand name which is well known in the DIY market.

WD is also retaining its familiar colour-coded product segmentation system - green at the lowest end, blue for mainstream users, and black for those who demand high performance. We reviewed the SATA version of the WD Blue SSD earlier this year and were happy with it, though pricing was a potential issue. Today, we're checking out its more premium sibling, the WD Black PCIe SSD, and we also have an M.2 version of the same WD Blue SSD in what should make for an interesting comparison. While SSDs in general are a lot faster than spinning drives, not all are the same. Today's most premium SSDs connect to your computer's motherboard directly using the high-speed PCI Express (PCIe) interconnect, rather than the legacy SATA bus. Some PCIe SSDs are designed to plug directly into PCIe expansion slots, while others use the much smaller M.2 card format that still harnesses four PCIe lanes for the same amount of bandwidth. WD sells its Black PCIe SSD only as an M.2 module, and you should be able to find at least one M.2 slot on any enthusiast-class motherboard manufactured over the past two years. Installation requires no more than a small screwdriver, and you don't have to deal with any cables.

This SSD is aimed at performance-hungry users who have generous enough budgets and are willing to splurge where it will make a difference. You can expect to pay about 50 percent more at each capacity level for the WD Black PCIe as opposed to the WD Blue - whether that's worth it is entirely up to you.

Sequential read and write speeds are rated at 2050MBps and 800MBps respectively. WD notes that these figures are arrived at using CrystalDiskMark with a queue depth of 32, which is designed to saturate the SSD's controller to show it in the best light. Such figures rarely reflect real-world performance scenarios. Endurance is 160TBW, so you can write 160TB of data to the drive in total over the course of its life before seeing any wear and tear to the flash memory. The warranty period is five years, which matches what Samsung and other companies offer for their high-end models. 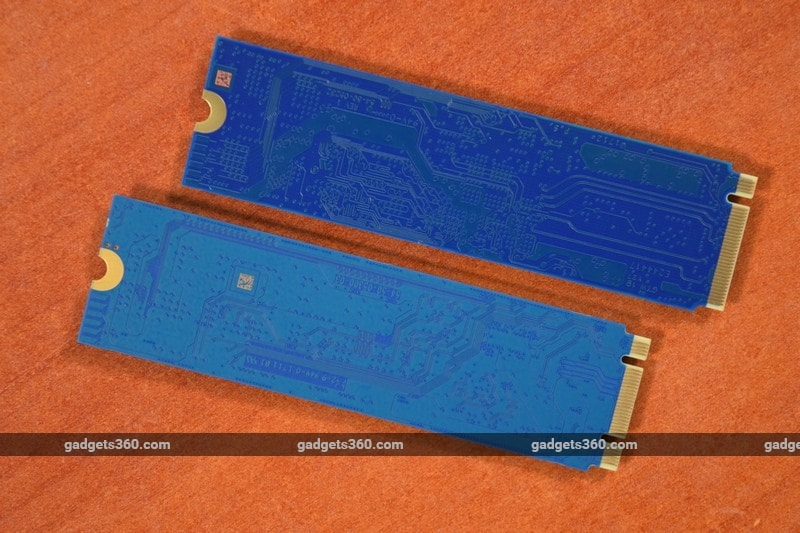 For mainstream users, WD offers its Blue SSD line of SATA SSDs, in both the 2.5-inch and M.2 form factors. The thing to remember is that M.2 allows for fast PCIe or standard SATA devices in the same slots, so while the WD Blue might look just like the WD Black PCIe SSD, its performance characteristics will be very different.

In fact, WD doesn't differentiate between the 2.5-inch and M.2 versions of its Blue SSDs on its spec sheet or in terms of pricing. Simply choosing the M.2 version of the same product doesn't give you any performance benefits. To confirm what kind of M.2 SSD you're buying, pay attention to the connector edge - you'll see that while the WD Black PCIe has only one notch, the WD Blue has two. These are called keys, and the second notch tells us that this particular module is designed differently.

What we have with us today is WD's previous-generation Blue SSD, which uses planar TLC flash memory, not the newer WD Blue 3D which was the first consumer drive in the world to use 64-layer NAND when it launched at Computex this year. All this means that its performance should be very similar to what we saw with the 2.5-inch model we've already tested.

The WD Blue is available in capacities of 250GB, 500GB, and 1TB. Sequential read and write speeds are rated at 540MBps and 500MBps respectively for the 250GB model (the 500GB and 1TB models are slightly faster). Endurance is rated at 100TBW, which means you should be able to fill this drive completely 100 times over before it shows any signs of degrading. However, you get only a three-year warranty.

Setting up both drives was incredibly simple. Depending on your motherboard's layout, you might need to unseat a graphics card in order to get at the M.2 slot, but it takes only a few seconds to pop in an SSD and tighten one screw.

Starting with the WD Black PCIe SSD, Windows showed 476.81GB as the formatted capacity for our 512GB review unit. CrystalDiskMark gave us 1957MBps sequential reads and 839.9MBps sequential writes, which are only very slightly off from WD's claimed numbers. SiSOFT SANDRA gave us 1.43GBps and 818.93MBps for random reads and writes respectively.

On the other hand, the SATA-based WD Blue SSD gave us 560.9MBps and 532.7MBps sequential read and write scores in CrystalDiskMark, which slightly exceed WD's rated figures. These are in line with the 558.2MBps and 524.9MBps respectively that the 2.5-inch version of the same drive achieves. SiSOFT SANDRA gave us 495.89MBps random reads and 487.28 random writes. Anyone who is used to a spinning hard drive will find that this is a huge improvement.

WD offers a free tool called SSD Dashboard on its website, and we wish it was advertised more prominently on the packaging of the two SSDs. This is a pretty handy bit of software that lets you monitor your drive's health and operating temperature, and gives you a visual overview of how much space you've used. You can also check out performance statistics, perform a secure erase (WD Black only), and update the drive's firmware. Anyone who is used to a spinning hard drive will find that any SSD provides a huge improvement to speed. Your PC will boot, sleep and wake quicker, and programs will load in a fraction of the time. SSDs are still relatively expensive but you have choices in terms of capacity and performance levels. WD's Blue SSD is great for casual users and provides a balance of performance and cost. The Black PCIe SSD is a step up from there, for those who can afford it, but it's still relatively affordable. As of now, WD isn't competing with the absolute highest performance options in the market such as Samsung's SSD 960 PRO and Kingston's KC1000.

At these prices, the WD Blue goes up against Samsung's popular 850 EVO series which is also available in the SATA M.2 form factor, and the WD Black PCIe SSD has to fend off the Samsung SSD 960 EVO PCIe M.2. You could go with whichever option is selling for less at the time of your purchase, but you shouldn't have any trouble if you just go with the tried and trusted WD name.

product WD offers its SSDs at multiple different capacities, form factors and price points, to suit the needs of a wide range of PC builders and enthusiasts. 4 out of 5 stars