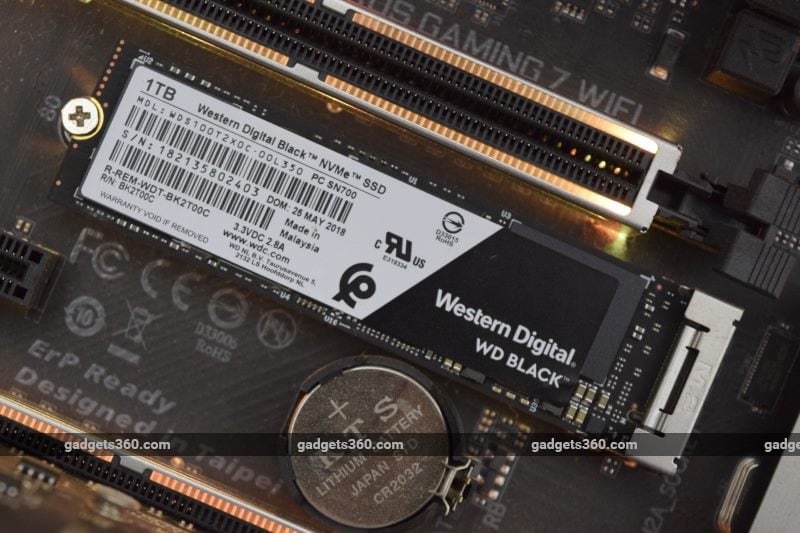 Almost exactly a year ago, we got our hands on some of WD's first SSDs, the mid-range SATA Blue and high-end NVMe Black models. We've been fairly impressed with how the company has embraced the future, adding solid-state storage to its portfolio of traditional hard drives. The market is clearly shifting, and we are strong proponents of SSDs for PC users no matter their budgets. Now, with a bit of experience under its belt, WD has released the next generation of its Black SSD and we're going to see whether the company is keeping up with the rest of the market.

It would be very easy to confuse the new 2018 version of the WD Black NVMe SSD with its predecessor as the company's retail boxes don't include the revision year and both look very similar. We'd advise potential buyers to look very closely — the highlights of the new model are its use of 3D NAND flash and the rated read speed of 3400MBps, both noted prominently at the bottom of the newer box.

If you need to be totally sure, the 2018 edition is available in 250GB, 500GB, and 1TB capacities, whereas last year's version was only sold in 256GB and 512GB capacities. Also, while the older model had a dark blue circuit board, the new one is literally all black to match its name.

WD is clearly aiming at high-end enthusiasts who demand the best possible speed. Samsung is often the default choice for buyers, and smaller players such as Corsair have tried carving out niches in the enthusiast community. We're going to put the new WD Black NVMe SSD through its paces to see whether it deserves a place of price in your PC.

As is evident from the name and box, this is a NVMe SSD built around 3D NAND flash. It's available only in the M.2 form factor as are most other high-end SSDs today. WD has used 64-layer flash chips and has not named the controller. The company does mention its own “storage architecture” that is responsible for low latency, power and thermal management, and communications over the NVMe protocol.

All the chips, including the flash itself, the controller, and the DRAM cache are on the top of the circuit board, leaving the bottom completely blank. This is good to know if you're thinking of upgrading a laptop which might not have enough clearance for dual-sided M.2 modules.

The different capacities have different rated speeds. The 1TB version's read and write speeds are 3400MBps and 2800MBps respectively, while the 500GB model has the same read speed but a write speed of 2500MBps. The 250GB model goes down to 3000MBps and 1600MBps respectively. We're reviewing the 1TB model which is going to have the most favourable benchmark results, so keep that in mind when making your purchase decision.

Endurance is rated at 600TBW, 300TBW, and 200TBW respectively for the three capacities. The warranty is five years for all three. This means that for the 1TB model, you should be able to fill it completely once almost every three days for the duration of its warranty period without any trouble. That's way more than any ordinary PC user would stress out their SSD, but only about one-third of the 1700TBW rating that Corsair's 960GB Force MP510 has.

As we've seen with WD before, the company is sharing resources with its subsidiary SanDisk, and you'll find the same specifications if you look closely at the SanDisk Extreme Pro SSD. The company has told us in the past that the WD brand is well regarded by DIY PC builders, while casual consumers who are more likely to buy pen drives or SD cards are more familiar with the SanDisk name.

The drive arrives with only a small warranty leaflet in the box. There is no integrated heatsink. While some companies do like to boast of having a heatsink, many motherboards today have their own cooling mechanisms so you might just want to stick with that for simplicity and aesthetics.

Buyers of the WD Black NVMe SSD can use the company's SSD Dashboard software to monitor drive health, temperature, capacity, and performance. You can update the drive's firmware, browse through a digital user manual, and generate a report to send to WD support for easy diagnostics. The only downside is the scattershot advertising for WD's other products within the UI — we're already running a WD Black SSD, we don't need to be told to "upgrade" to a WD Blue.

WD also offers a copy of Acronis True Image. A WD drive must be detected for it to be installed, but it will work on all drives. This will let you move your operating system to another drive, back up individual files and folders, and create a bootable rescue disk.

We found both programs buried on a support page on WD's website. It would have been helpful to have at least a mention of them on the drive's box, because it's quite likely that people will not discover them.

Installation is as simple as slipping the drive into an open M.2 slot and tightening one screw. We were up and running without any pain in less than a minute. Windows 10 reported the formatted capacity of our 1TB review unit as 931.5GB.

CrystalDiskMark showed that sequential read and write speeds of 3490.1MBps and 2847.1MBps, very slightly exceeding the official rating. This test is performed with a queue depth of 32, which saturates the drive and reflects a best-case scenario rather than everyday real-world usage. Random read and write speeds were also very strong at 1689MBps and 1678MBps respectively. This is dramatically better than the previous-generation WD Black PCIe SSD.

We also ran through the Anvil benchmark, which calculates combined read and write scores after testing random and sequential operations, latency, and throughput. Those scores for the WD Black NVMe SSD were 3,764.39 and 9,165.10 respectively. The final combined score was a very strong 12,929.50. That's only a little less than the 14,975.81 that the Corsair Force MP510 managed.

Verdict
The new 2018 WD Black NVMe SSD delivers strong performance across the board. It isn't the fastest that we've ever tested, but with progress like this, WD is in a position to challenge the biggest players in the market. The WD brand will of course appeal to a lot of buyers so we wouldn't be surprised to see a lot of people choose this drive over Samsung, Intel, Adata, or even SanDisk.

Compared to the phenomenal Corsair Force MP510, this drive's rated endurance is much lower, but you still get more than enough headroom for even the most dedicated of gamers and content creators, and this is not something we'd worry about. WD has the advantage of much better distribution and availability too.

That brings us to the price. We were very upbeat about Corsair's fantastic pricing, and it seems that WD has come very close. While the 1TB WD Black NVMe SSD has an official price tag of Rs. 32,999, it is listed online for around Rs. 29,000. That's very affordable for an NVMe SSD, and also in line with the popular Samsung SSD 970 Evo. If you're after high performance and good value, we have no hesitation in recommending the 2018 WD Black NVMe SSD.

Resident Evil 2 PS4, Xbox One, and PC India Price and Release Date Revealed
Redmi 6A, Realme 1, ZenFone Max Pro M1, Others: Which Is the Best Budget Phone in India?