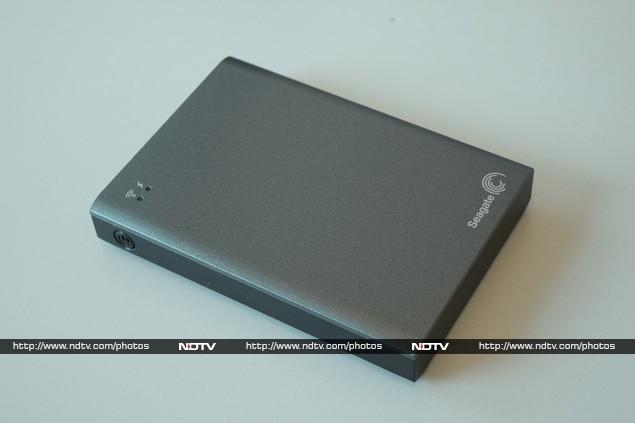 The shift from PCs and laptops to tablets and smartphones has brought about quite a few shifts in habits and expectations. Different devices have different capabilities and you don't always have the right one with you at the right time.

One of the most frustrating things about using multiple devices is making sure the files you need are available on all of them. Capacities are limited and not always expandable. It also isn't easy to move files from Android to iOS and vice versa. Folks who need to move around a lot usually wind up dependent on some form of online storage which is good enough for text and small files, but impractical for music, video and bulk storage.

Seagate offers a line hard drives that work across all platforms, called Wireless Plus, which can act as hubs for all your digital devices; wired or wireless. It uses Wi-Fi to connect to portable devices and can be accessed by multiple people simultaneously. We had reviewed the 1TB model when it first launched last year, and found it to be a very interesting solution to the problems of storage and inter-accessibility.

Between then and now, Seagate has added support for Amazon's Kindle Fire OS and the Windows 8/RT Modern UI. The companion app for Android and iOS has been totally revamped, and you can now write files to the drive from it. There's also support for integration with Google Drive and Dropbox so you can pull files from these two cloud services as well.

We now have the new 2TB model with us for review. With a high price but equally high capacity, is it just a novelty or a genuinely practical tool? We find out. 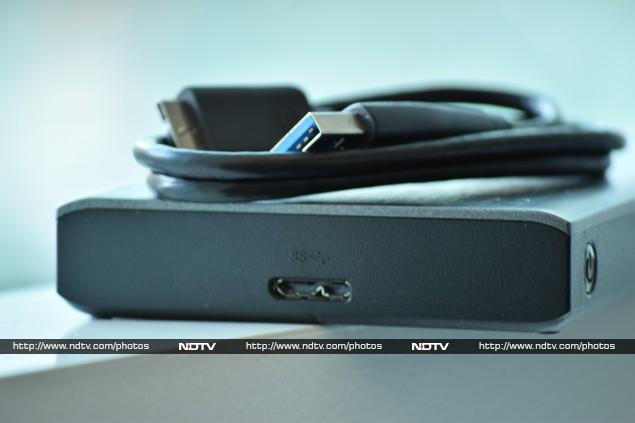 Look and feel
The Wireless Plus is very thick, chunky and heavy by current standards for portable hard drives. That's mainly because of the hefty battery which is rated for 10 hours of operation. The body is entirely plastic but the top has a brushed metal texture.

There's a Micro-USB 3.0 on the rear like any other hard drive. There's a power button on the left edge and two status LEDs on the front. One LED shows you the device's charge status, while the other lets you know when it's possible to connect via Wi-Fi.

The drive isn't really pocketable and you'll notice its weight in a bag, but that's a fair tradeoff if you want 2TB of data with you at all times and accessible from any device. 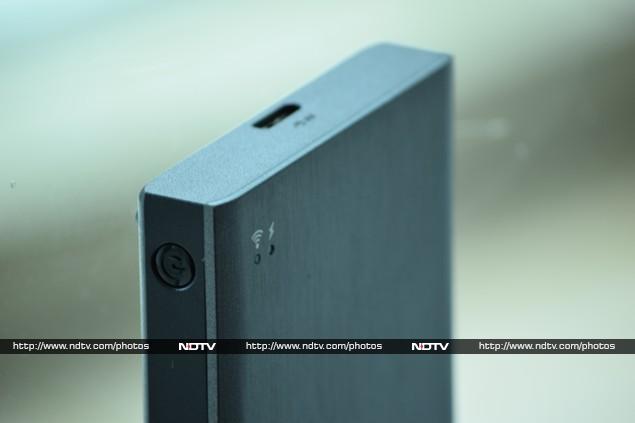 Setup and usage
First of all, you can use the Wireless Plus just like any other portable USB hard drive. Simply plug it in and fire up Windows Explorer or the OSX Finder and browse through its contents. All Wi-Fi functions are disabled when a USB connection is detected, but the battery will charge while it's plugged in.

The drive came preformatted to NTFS and we found that the actual usable capacity was 1.81TB. A driver that enables full OSX read/write access is included on the drive itself, or you can reformat it to HFS+ if you prefer.

To connect via Wi-Fi, all you have to do is press the power button on the side for a few seconds and then wait for the blue Wi-Fi LED to stop flashing. This means it is broadcasting its own signal like your router does. You'll be able to see it in any device's list of available connections, and there's no password or other security by default. Up to eight devices can connect to the Wireless Plus simultaneously but only five can stream media at any time. 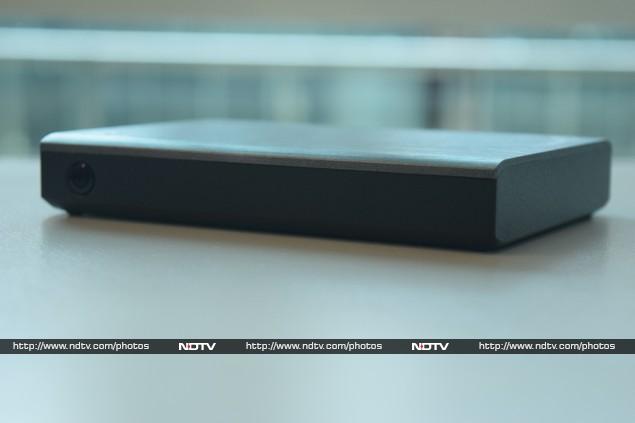 Once a connection is established between the Wireless Plus and your device, you can fire up the Seagate Media app (available on Android, Kindle Fire and iOS as well as the Windows 8/RT Modern UI) which will immediately show its contents sorted by media type. Alternatively, you can visit www.seagatewirelessplus.com in any device's browser window, which will give you the same functionality but with a less fluid interface. This is a nice touch, and it means you don't have to go digging around for the drive's IP address. The Web interface is especially handy for other people to access your files without downloading the app first.

The Seagate Media app is required to configure the Wireless Plus. You'll want to set up Wi-Fi security and configure a passthrough so that you can still connect to the Internet - the drive connects to your router and your device connects to the drive. You can also see the drive's battery level, check who is currently connected to it, and set up sharing and synchronisation with Dropbox and Google Drive.

For the most part, the app is not very well designed. It has a lot of functionality but media is not displayed intuitively and there are limited options for sorting and filtering. You can't browse by folder; only by media type. It also doesn't support many video formats. Luckily, this isn't a problem - you can use third-party apps such as VLC Media Player. Just let it scan the local network (which in this case is only the Wireless Plus itself) and you'll be able to access everything. In fact once the initial setup is done, there's really no need to launch the official app at all. 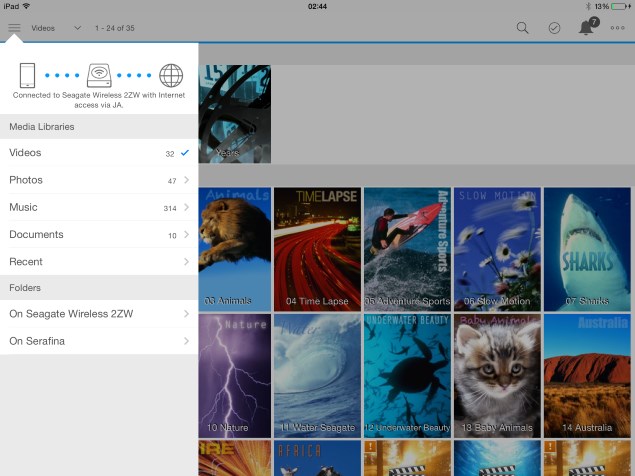 The Wireless Plus is also DLNA compliant, which means devices such as game consoles, smart TVs and digital media players can be used to browse and stream its contents. You'll need to set up the Wi-Fi passthrough so that the Wireless Plus is connected to your home network, after which other connected devices recognise it seamlessly just like any network-attached storage (NAS) or PC would be. Once you've configured the drive's Wi-Fi passthrough settings and it knows how to connect to your home network automatically, you should also be able to just turn it on and use it via your other DLNA products without needing its own app.

Seagate offers remote access features with all its network-attached drives, and the Wireless Plus is no different. In fact, you could leave it plugged in to a wall socket and it would function just like any other NAS on your home network and over the Internet.

All this makes the Wireless Plus an incredibly useful and versatile product. Performance
We tested the Wireless Plus with an iPhone 5c, a fourth generation iPad, a Windows 8 laptop and a WD Live network media receiver. We had no problem with Wi-Fi stability, although it took up to a minute for the drive to become ready for use each time it was turned on.

Media streaming worked pretty well as long as we were using an app that supported the file formats we wanted to play instead of the official app. Stuttering was extremely rare, but skipping around the timeline while playing video files made the stream drop quite often. 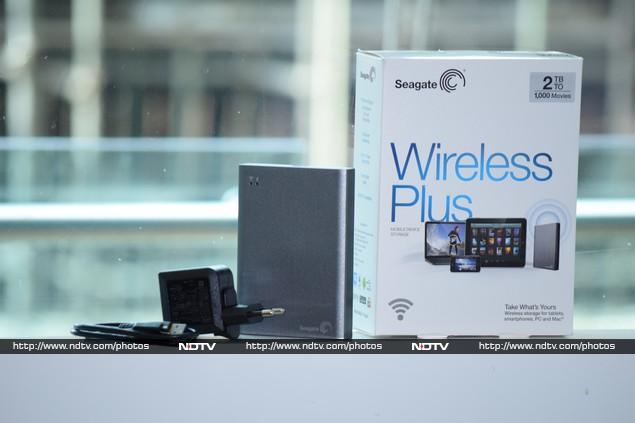 Verdict
There's no denying the fact that it's amazing to be able to have 2TB of data so easily accessible from such a wide variety of devices. The Wireless Plus could completely change the way you work and travel. You'll be able to get a lot of things done with a smartphone or tablet that would have previously required you to carry a laptop around.

However it is bulky, heavy and expensive. It also relies on a traditional spinning hard drive, which is sensitive to jerks, falls, and other forms of physical damage. You will need to look after it just as carefully as you do any other hard drive - and you should never store important data in only one place.

The 2TB model is very expensive, so you could still go with the 1TB model and enjoy the benefits of the new app. If you don't need so much space and versatility, or if portability and cost are very important, the Kingston MobileLite Wireless which uses SD cards and USB flash drives as the storage media is a very compelling alternative.