Most portable SSDs these days use the standard USB 3.0 interface (also advertised as USB 3.1) which is a bit of a bottleneck when it comes to speed. Sure, there are high-end and entry-level options, but manufacturers lean more on design and marketing to position different products. SanDisk has decided to raise the bar for performance and has also chosen a ruggedized aesthetic for its Extreme Pro portable SSD. This model is designed to be resistant to water and dust, which is always a good thing. The primary target audience is those who need high performance when working outdoors, such as creative professionals who are constantly on the go.

The SanDisk Extreme Pro looks a lot like the SanDisk Extreme, but the two should not be confused. We're reviewing the more premium model today, which promises faster data transfers and an aluminium frame to improve heat dissipation and rigidity. Both models are rated IP55 which means they can withstand being exposed to water for a few minutes and reasonable amounts of dust.

Sandisk, sister brand to WD and G-Technology under the Western Digital umbrella, is very well known for its SD cards and USB flash drives. This portable SSD fits in somewhere between the stylish WD My Passport SSD and the ultra-tough G-Technology G-Drive Mobile SSD R-Series. Let's see if it can stand out amongst its siblings as well as in the market overall. 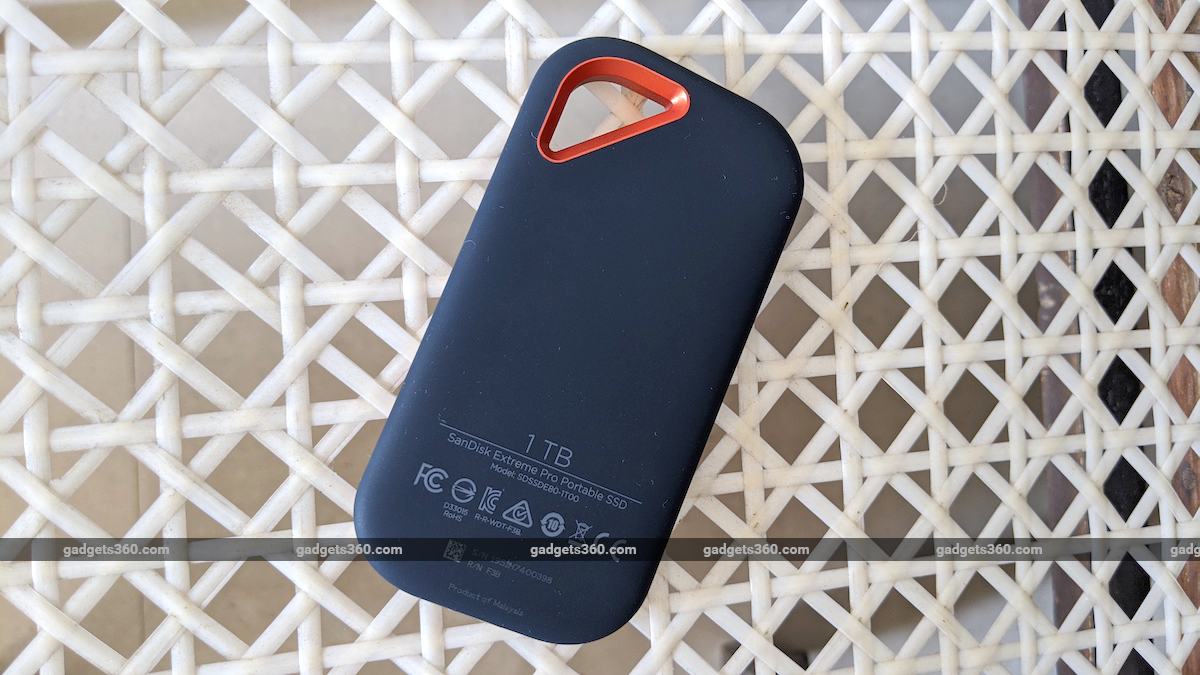 The rear is made of a rubberised plastic material

Portable SSDs can be very small but this one is larger than what we usually see. It's flat and oblong, but it should fit comfortably in most pockets and will hardly take up any room in a gear bag. The front is plastic with a pattern of dots and the rear has a rubberised texture for grip. Unfortunately both these materials and textures tend to pick up lots of dust and lint. The drive is difficult to keep clean, and even when unpacked brand new from its factory-sealed box, we had to wipe it clean.

The plastic front and rear appear black but are actually a very deep blue-grey when seen under direct light. There's a bright orange metal rim running around the perimeter and enclosing the USB Type-C Port at the bottom. Surprisingly, there's no LED to tell you when the drive is actively in use.

The highlight of course is the orange-rimmed cutout in one corner which immediately grabs attention. It looks almost like a carabiner clip that could be used to hook this SSD onto a bag or belt, which is in keeping with the rugged theme.

We aren't entirely sold on the colour combination and textures that SanDisk has gone with. In particular, we quickly got annoyed that we had to keep wiping fluff off the Extreme Pro SSD every time we pulled it out of a pocket or picked it up off a table. On the plus side, it does stand out and feels likely to be able to survive rough treatment, unlike many other portable SSDs. 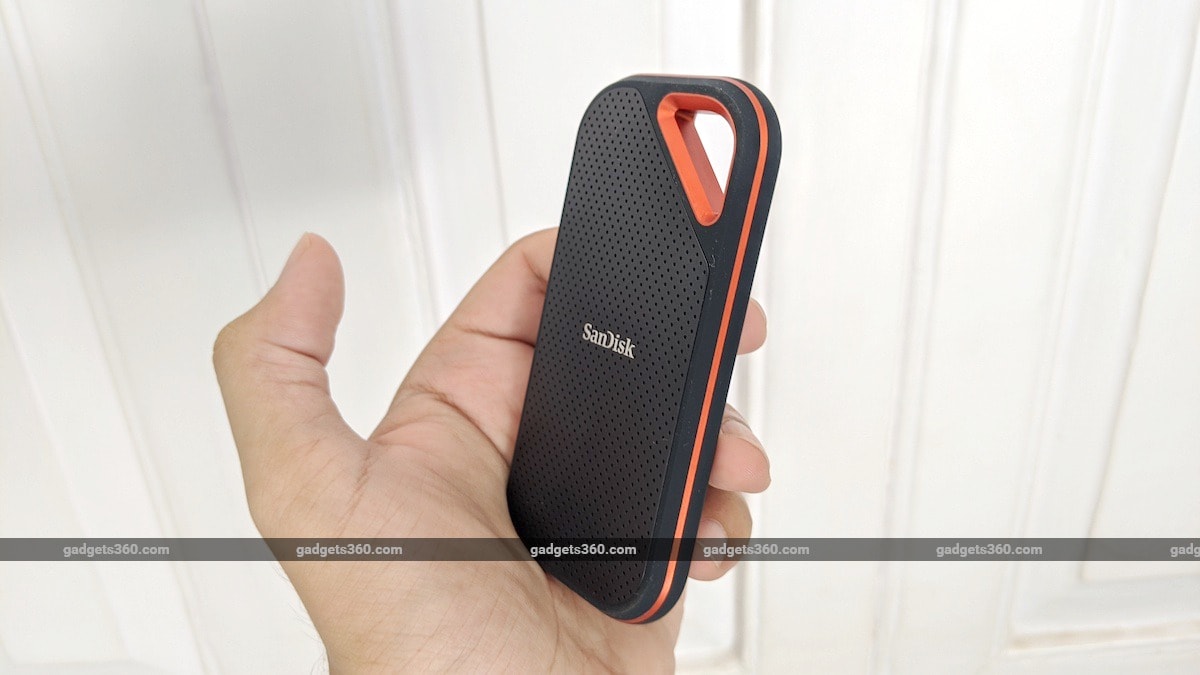 SanDisk claims a speed of 1050MBps and clarifies that this applies only to sequential reads – many manufacturers are happy to let you assume that their claims apply to all speeds, not just the best case scenario. The high speed is thanks to the USB 3.1 Gen2 (10Gbps) protocol which is twice as fast as standard USB 3.0 (yes, the naming of these standards has become a mess). You will of course need a laptop or desktop that supports this standard as well.

You can get the SanDisk Extreme Pro portable SSD in 500GB, 1TB and 2TB capacities. The device supports 128-bit software AES encryption which you can configure using the downloadable SanDisk SecureAccess app. The five-year warranty is a pleasant surprise, as three years is the industry standard. Inside the oversized retail box, you'll find a USB Type-C cable as well as a Type-A cable so you can immediately get going no matter what kind of computer you're using.

We used an HP Spectre x360 13 aw0205tu laptop to test the SanDisk Extreme Pro portable SSD because of its Thunderbolt 3 ports which will allow us to measure the speed of this drive without any bottleneck. Windows showed 931.51GB of space available. SanDisk uses the ExFAT file system by default which means you'll have interoperability with Windows and macOS out of the box, although Time Machine on a Mac won't work without reformatting (or partitioning) this drive.

The trusty CrystakDiskMark benchmark reported sequential read and write speeds of 959.5MBps and 960.7MBps respectively, which are both close to what SanDisk claims, but not quite there. Most consumer SSDs don't achieve over 450MBps. Random reads and writes are more representative of real-world situations, and we saw speeds of 261.4MBps and 235.2MBps respectively.

The Anvil storage benchmark gave us scores of 2373.3 for reads and 2449.15 for writes, which works out to a total of 4825.45 overall. These scores are all significantly higher than what we've seen from the Seagate One Touch SSD and even the HyperX Savage Exo. As long as you use a PC with a USB 3.1 (Gen2) port, or Thunderbolt 3 which can fall back to this speed, you'll see performance that's about twice as high as what most consumer portable SSDs today deliver.

We did feel the body of the SanDisk Extreme Pro heating up quite a bit when heavily stressed with our tests and large file copy operations. Other than that, there's nothing to complain about at all. 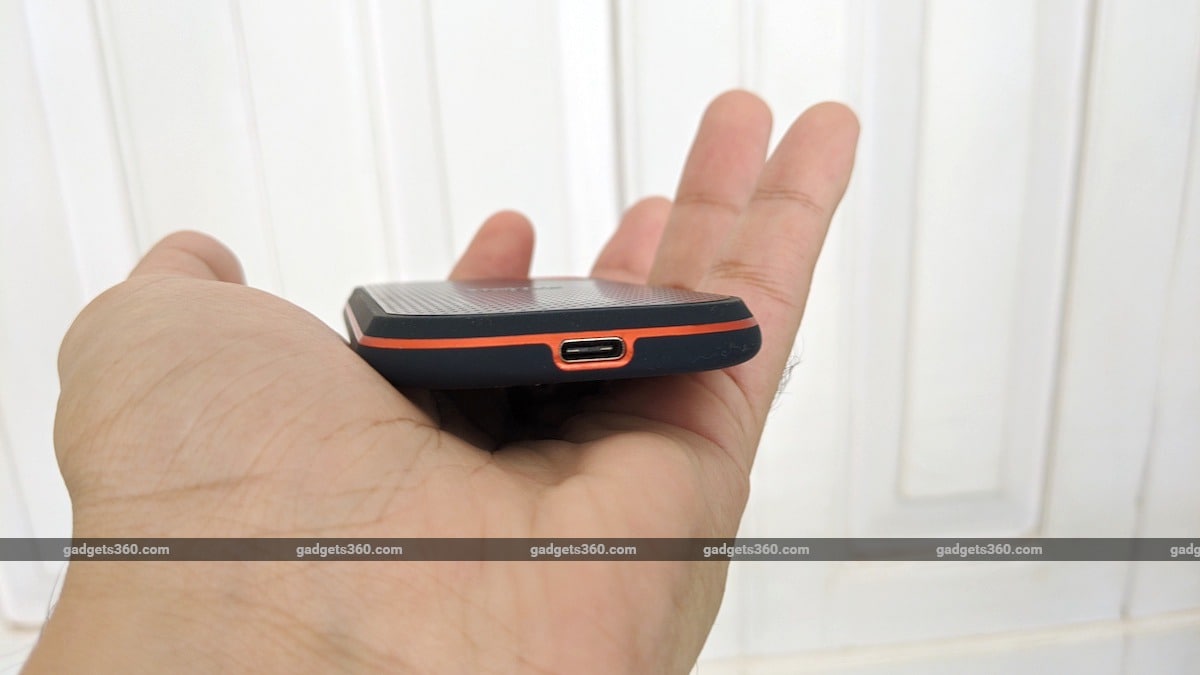 There's a USB Type-C port on the bottom, and you get Type-C as well as Type-A cables in the box

The SanDisk Extreme Pro portable SSD stands out in the market thanks to its high performance, which sets the standard for a new class of devices. The IP55-rated body and generous warranty period are also bound to appeal to buyers. However, this model has been designed and named very similarly to the SanDisk Extreme. That model is slower and built of plastic, making it far more pedestrian. It would be too easy to pick up the wrong one by mistake.

If you have a high-end computer with fast enough USB ports, you'll be all set. Of course you can fall back to working at lower speeds but that defeats the purpose of spending so much money.

Speaking of money, the 1TB version of the SanDisk Extreme Pro portable SSD, which we tested, retails for Rs. 19,999 in India which is just about twice as much as we've seen popular models such as the popular Samsung SSD T5 going for on sale. We do hope that the price falls over time. For now, if you don't need the speed, you'll be happy with a more mainstream option.

product The SanDisk Extreme Pro boasts of speeds twice as high as most consumer portable SSDs, but that comes at a cost. 4 out of 5 stars