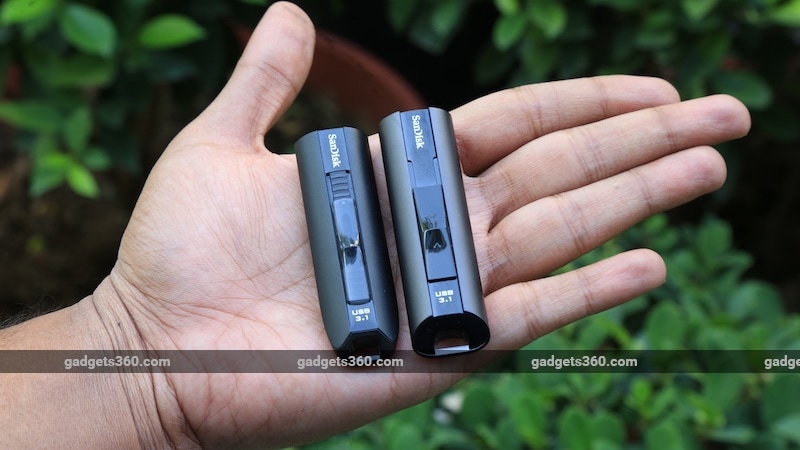 In today's fast-paced world, speed is everything and we seldom have the patience to wait around to transfer large files. Storage drives today try to keep up with people who want to transfer content on the go, even for last-minute meetings and journeys. When it comes to storage, we look for bigger and faster as the years go by, and SanDisk has tried to bring just that with the Extreme Go and Extreme Pro USB 3.1 flash drives.

But before we get into it, we remind you that both the Extreme Go and Extreme Pro flash drives work at USB 3.1 Gen 1 speed. USB 3.1 sounds like it should be faster than USB 3.0, but there two tiers to this standard. USB 3.1 Gen 1 works at the same 5Gbps speed as USB 3.0, while Gen 2 takes it up to 10Gbps. Both use the same physical USB 3.0 Type-A connector which is backward-compatible with USB USB 2.0 ports, and can run at that lower speed as well. Companies that advertise only "USB 3.1" might be just using that name to make products seem newer and faster, when in reality USB 3.1 Gen 1 is functionally identical to USB 3.0.

The Extreme Go looks similar in size and shape to the Extreme Pro. If you were to look at both from a distance, you might not be able to tell them apart. However, on closer look you'll notice that the Extreme Go is curvier around the looped end compared to the Extreme Pro. The former also sees a transparent slider over a rugged texture. Since the Extreme Go is aimed at the lower end of the pen drive market, it has a plastic casing rather than the metallic one seen on the Extreme Pro. The plastic feels smooth and also makes the drive feel very light. It's all black, which we liked. A slider on top brings out the USB connector, and feels very sturdy when you slide it end-to-end, making a solid and very satisfying "click" sound. Despite its smooth design, the drive can feel a bit too plasticky, and might not survive multiple falls.

In this area, the Extreme Pro seems to have an edge with its aluminium body. Yes, it is a lot pricier, but you have the comfort of knowing that it can survive rough handling. The metal body feels solid and is quite smooth all around.

Both models are bigger and bulkier than what you would commonly find in the market today. The chunky design of the Extreme Go and Extreme Pro could block part of another USB port as it did on an HP 240 G4 we tested them with, so some users may find an issue with that. The drives have blue LEDs that light up when they are connected. Notably, the blue light on the slider of the Extreme Go is quite prominent whereas you'll see a subtler glow on the Extreme Pro.

The SanDisk Extreme Go USB 3.1 flash drive comes in 64GB and 128GB storage capacities, and are rated for up to 200MBps read and 150MBps write speeds, while the Extreme Pro promises up to 420MBps and 380MBps respectively. It goes without saying that you will need a USB 3.1 or USB 3.0 port to really take advantage of these drives. The company claims that the Extreme Go can transfer a full-length 4K movie in under 40 seconds, while the Extreme Pro can do the same in under 15 seconds. We tested out the 64GB variant of the former and a 128GB variant of the latter and here's what we found.

The drives are pre-formatted to ExFAT, which works with both Windows PCs and Macs. To test their speed, we transferred videos totaling around 4.5GB in size to the Extreme Go drive from a MacBook Air with USB 3.0 and the transfer was completed in under 30 seconds. The same process took less than 15 seconds with the Extreme Pro, which is pretty impressive.

For real world tests, we copied files around 4GB of files back and forth from each drive to the PC, and the speeds were satisfactory, pretty much living up to what the company promises. In our tests, the Extreme Go's write speed peaked at 181MBps while the Extreme Pro topped out at 346MBps.

The tests tell us that both drives can meet the needs of those who copy a lot of data between computers. The Extreme Pro in particular is, as the company claims, SSD-worthy, and works faster than most common USB drives available today.

Both the Extreme Go and the Extreme Pro pen drives come with SanDisk SecureAccess software preloaded, as well as a one-year subscription to RescuePRO Deluxe, which claims to be able to help you recover lost data.

Verdict
The SanDisk Extreme Go and Extreme Pro USB 3.1 flash drives are specifically designed for consumers who want to transfer data quickly. There's no doubt that these products offer good read and write speeds, but at Rs. 3,299 (street price) for the 64GB Extreme Go, it costs nearly twice as much as other 64GB drives in the market today. The 128GB model is priced at Rs. 5,990, and will likely see fewer takers.

The company promises SSD speeds on USB drives, and the Extreme Pro delivers. It starts at Rs. 7,000 (street price) for 128GB and goes up to Rs. 11,475 for 256GB, but users might be willing to shell out because of its faster speeds and durable metal body. As the capacity gets higher so does the price, and what you'll really need to ask yourself is how much speed and convenience you really need.