If you use a computer, perhaps the most significant development in the past few years has been the rise of solid-state drives aka SSDs. GPUs continue to evolve at a fast pace, but the improvements in the performance of most other PC components has been incremental at best - that's if you don't count SSDs. If you are someone who's made the switch from a hard disk to a SSD as your primary storage medium, the difference in performance can be like night and day.

While prices of internal SSDs have come down to a point where many can afford to buy a machine where at least part of the storage is solid-state, most external storage solutions still tend to involve hard disks. Part of the reason is, of course, cost. While low-capacity SSDs have become accessible, the capacities of external drives on average tend to be a lot higher, which means you are looking at pretty high costs of entry. You could justify this a bit because of the higher speed that you get, but that has traditionally been a problem as well.

With the introduction of USB 3.1 - specifically USB 3.1 Gen. 2, which theoretically offers speeds of up to 10Gbps - that's beginning to change. While we might not come anywhere near those theoretical speeds just yet, today we have a drive that aims to offer the fastest portable SSD experience till date. Does the Samsung T5 live up to that claim? Let's find out in our review.

At 51g and 74x57.3x10.5mm (3.0x2.3x0.4 inches), the Samsung T5 is practically identical to its predecessor - the T3 - in terms of size and weight. It's a tiny bit smaller than most credit and business cards, but a little bit thicker than the average smartphone. You won't have any trouble fitting it in your pocket. 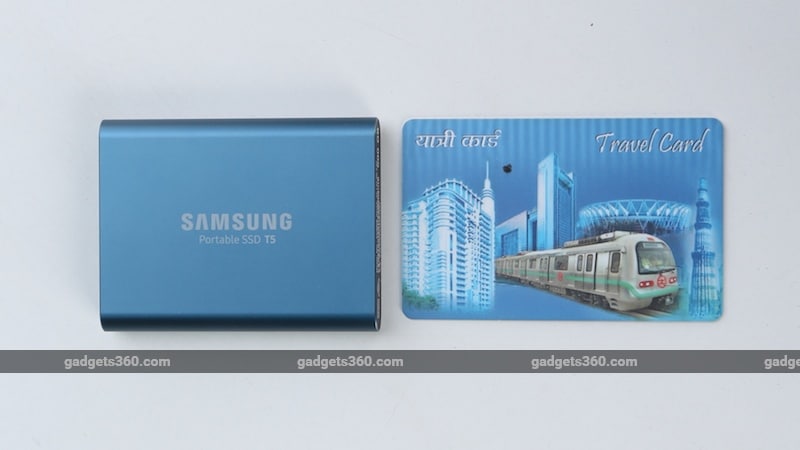 Like other SSDs, the T5 no moving parts. Samsung says it can handle drops of up to 2 meters, though we weren't tempted to test this claim. The drive is rated for use between 5°C and 35°C, with humidity between 10 and 80 percent.

The two-colour finish on the Samsung T3 has given way to two distinct aluminium finishes - Alluring Blue on the 250GB and 500GB capacities, and Deep Black for the 1TB and 2TB models. In the box, you get the Samsung T5 SSD, a manual, and USB 3.1 Gen 2 Type-C to Type-C as well as Type-C to Type-A cables, which is great.

The Samsung T5 has support for USB 3.1 Gen. 2 connectivity, which offers theoretical speeds up to 10Gbps; double of what the T3 supported with USB 3.1 Gen. 1. Of course the actual speeds you can expect to get are much lower. The Samsung T5 is rated for transfer speeds of up to 540MBps, a 20 percent bump on paper compared to the T3.

We connected the Samsung T5 to a HP Spectre 13 laptop using the bundled Type-C to Type-C cable to run some benchmarks and find out if it lives up to its claims. In CrystalDiskMark v6.0.0, we recorded sequential reads of over 550MBps and sequential writes of 499.9MBps, with the former topping Samsung's own claims. With a queue depth of 32, we got random read and write speeds of 150.7MBps and 147.2MBps respectively, which are great. Our real-world experience was equally good, and we were able to copy a 5.2GB file from the SSD on a 13-inch 2016 MacBook Pro laptop to the Samsung T5 in 10 seconds.

Sequential and random read/ write speeds as recorded by CrystalDiskMark with queue depth set to 32. 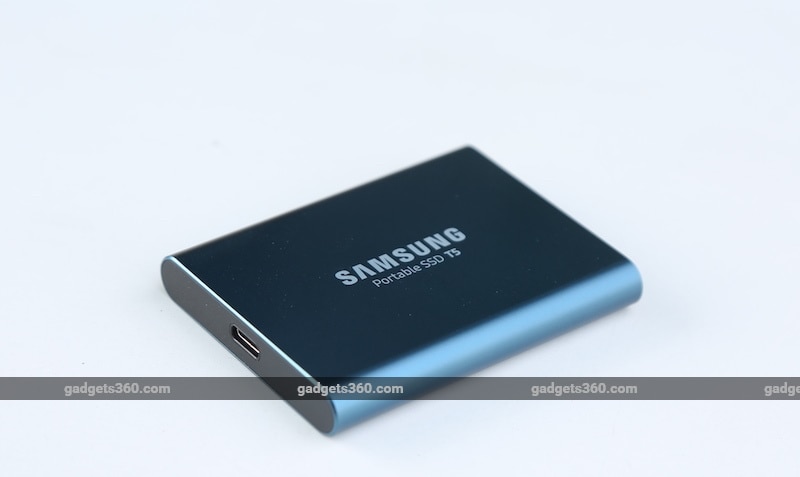 Like many other external drives, the Samsung T5 comes pre-formatted as exFAT. Our 500GB review unit had roughly 465GB of space available for use. Unlike some other vendors, the bundled software is pretty barebones, and though we like that for the most part, Samsung might have taken this too far. The drive contains setup files for an application called SamsungPortableSSD for Windows, Mac, and Android, whose primary function is to facilitate password-based hardware encryption.

When you install and launch the app, you are prompted to set a password for the drive. If you ignore this, you can use the Samsung T5 like any other drive. If you do set a password, however, you need to enter it every time you plug the drive in to a host device. The device will need to have the SamsungPortableSSD application installed on it for you to unlock the drive's contents. If the app is not installed, you will see a read-only partition with the setup files for the three platforms we mentioned above (the Android version is just a text file with a link to the location where you can download the app).

We tested this feature and found that it works as advertised, with no difference in performance in synthetic benchmarks. Note that if you forget your password, there's no way to restore access to the contents of your drive. You can, of course, format the drive and reuse it, though you will obviously lose whatever was on it before.

The SamsungPortableSSD app also lets you check for firmware updates for your drive. We would've liked at least some additional functionality, such as the ability to see the health/ status of the drive without needing to resort to third-party utilities. The drive has an LED that lights up solid blue when it's plugged in/ idle, blinks blue when you are reading/ writing, and blinks red once when it's safe to remove the drive or when the computer is in sleep mode. 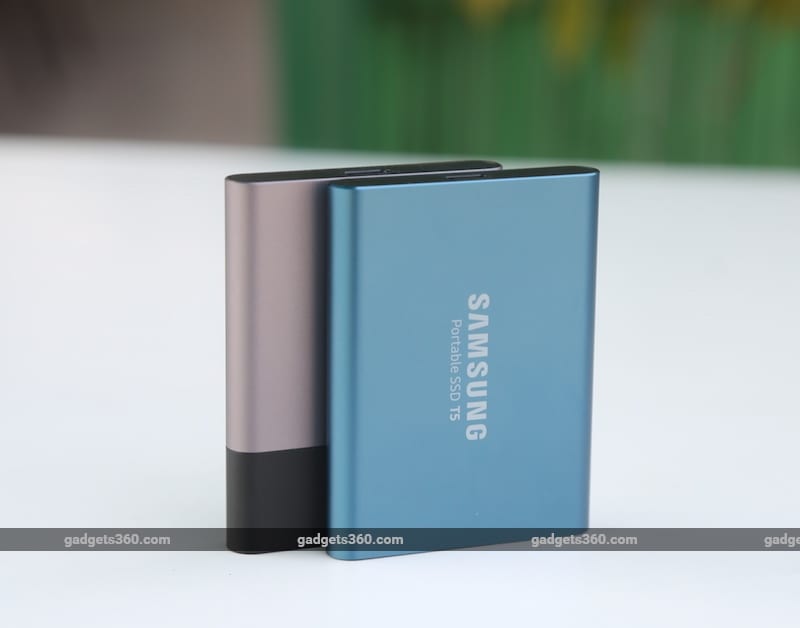 Verdict
The best things in life might be free, but that's certainly not the case when it comes to computer hardware, where the adage ‘you get what you pay for' is more appropriate. The Samsung T5 starts at Rs. 14,000 for the 250GB model, and goes up all the way to Rs. 80,000 for the 2TB model, which is more than what you'd pay for a premium laptop. Of course these are the MRPs, and we found the 250GB model retailing at Rs. 9,999 on Amazon India. The 1TB model is currently listed at at Rs. 29,999 as opposed to its MRP of Rs. 40,000. All models come with three-year warranty.

The 500GB model we reviewed sells for around Rs. 16,500 online, compared to its MRP of Rs. 21,000. At this price, it seems like a pretty sweet deal for a product that we don't really have any complaints about. If you are in the market for fast, portable SSD in India , you don't need to look beyond the Samsung T5.

product Is Samsung T5 the fastest portable SSD you can buy right now in India? Read our review to find out. 4.5 out of 5 stars