The age of affordable SSDs is upon us. Prices have been falling quite steadily over the years as production volumes have ramped up and technology has improved, and now the industry could take another leap forward with the advent of QLC, or quad-level cell, flash memory. QLC stores four bits of data per cell, a 33 percent increase in density compared to the currently prevalent TLC (triple-level cell) standard. Samsung is the first to launch QLC-based SSDs in India, with its SSD 860 QVO product line. These will be aimed at people who need a lot of storage space but can't afford much — typically, users who have a small SSD for their operating systems and still have a large spinning hard drive for bulk data storage.

In fact, Samsung's pitch for this SSD series is that it is bringing multi-Terabyte-class SSDs to mainstream audiences for the first time. A lot of people are only looking at prices and hailing this moment as the death of spinning hard drives, but we need to actually test one of these before we get too excited. We have the 1TB Samsung SSD 860 QVO in for review today, and we're going to test its speed in the real world and also take a deep dive into the technology that makes it possible.

QLC flash memory technology
Manufacturers have been experimenting with various ways to push SSD prices down, such as eliminating RAM caches and using higher-density flash memory chips. Density is the most important thing to have changed over the years — we've gone from storing one bit per cell to four, and it's also now possible to create chips with up to 96 layers of circuitry, which drastically increases capacity without any increase in chip surface area. With current-day 3D TLC flash, SATA SSDs are already available at less than Rs. 2,000 for 120GB and Rs. 3,000 for 240GB. Of course not all models at those prices are good —quality varies wildly, and there can be tradeoffs when it comes to reliability too.

Bits are stored in flash memory cells by applying an electrical charge to them. SLC, or single-level cells, only need to be able to handle two voltage states and can switch between them rapidly, which is great for access speed. For each additional bit, the number of supported voltage states needs to double. Several years ago when MLC (multi-level cell) flash memory initially rolled out, it was met with deep scepticism, and many people feared that data would degrade if the voltage values of cells fluctuated over time. However, MLC proved to be faster, cheaper, and no less durable for practical consumer purposes, and not a single SLC SSDs is still available today — they're just too expensive to produce.

MLC typically refers to flash that can store two bits per cell, but some companies including Samsung use the term literally, and you'll see terms like “3-bit MLC” and “4-bit MLC” in place of the more common TLC and QLC. TLC in its turn was considered potentially slower and less reliable than MLC, but has now almost completely replaced it. It's no surprise that QLC is facing the same questions. It takes incredibly precise engineering to design cells with tolerances for sixteen possible voltage states, plus the effects of switching states. Wear and tear will also increase as each cell is accessed more frequently.

SSDs have so far been able to compensate with error correction algorithms, wear levelling to distribute writes evenly, caching, and pre-emptive compression. Some of these things might affect speed, and some might affect longevity. QLC has not been around long enough for its real-world endurance to have been measured, and it remains to be seen whether it will displace TLC to the same extent as we've seen with each progression so far. Within the next few months we'll see QLC pop up in low-end SATA drives as well as high-end NVMe ones, from pretty much every brand, giving consumers more choices but potentially creating confusion. Manufacturers of course have every incentive to lower costs and increase their margins, but hopefully consumers will see some price benefits too. 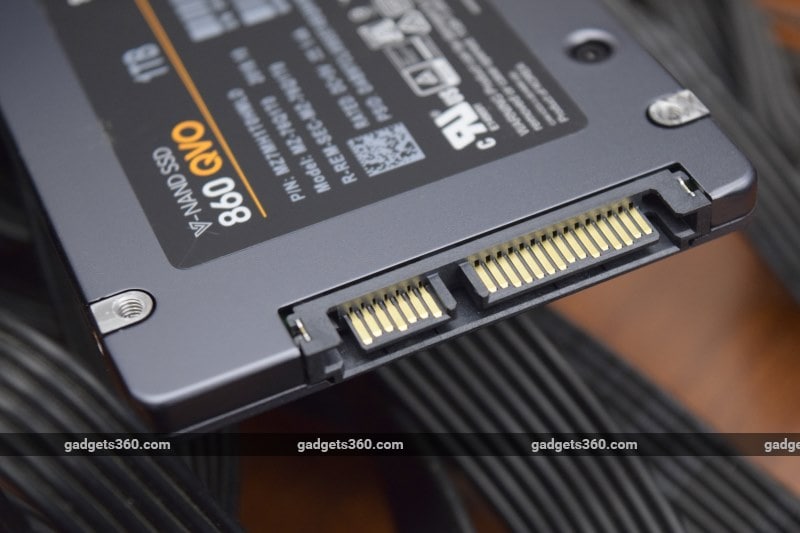 Samsung has obviously chosen the name QVO to group this new class of SSD with the popular workhorse SSD 860 Evo series (Review), and the previous entry-level 7xx models seem to have been retired. You might be surprised to see that the only capacity options for the Samsung SSD 860 QVO are 1TB, 2TB, and 4TB. QLC flash is so dense that Samsung can manufacture 1TB on a single chip.

At the time of launch, only the 2.5-inch drive form factor is listed, and there are no mSATA or M.2 options. The drive's casing is metal, and it comes in a simple light grey. The packaging is nearly identical to that of the SSD 860 Evo, and you get nothing inside it other than the drive itself and a warranty guide.

Performance is listed as up to 550MBps for sequential reads and up to 520MBps for sequential writes, which is on par with mainstream SATA drives. A closer look at Samsung's documentation shows us that these are the speeds you can expect while the drive is writing to its “TurboWrite” cache. This is a firmware-level feature that reserves a variable portion of the SSD and writes to it in SLC mode, effectively only storing one bit per cell as data is first received by the SSD. That data can be consolidated and moved to the bulk storage area later, and this process is completely transparent to the end user.

You get a minimum of 6GB reserved, and that can scale up to 36GB on the 1TB model or 72GB on the 2TB and 4TB models. That should be more than enough even for huge 4K video files or entire game folders. If you do manage to saturate the SLC cache completely, transfer speeds will immediately drop to around 80MBps for the 1TB model and 160MBps for the 2TB and 4TB models. Samsung uses its own in-house MJX controller, the same as with the SSD 860 Evo.

Reliability is rated at 360 TBW (Terabytes Written) for the 1TB model, and that scales up to 720 TBW for the 2TB option and 1440 TBO for the 4TB one. Samsung says this is sufficient for consumer use cases. The warranty is three years, which is standard for most SSDs but notably less than the 5-year warranty you get with the SSD 860 Evo and 860 Pro series.

Samsung offers its Samsung Magician software as a free download. This gives you an overview of your SSD's health (including a TBW wear level) and verifies that it is a genuine Samsung product. It also lets you run a quick performance benchmark, update its firmware, and securely erase its contents. The software is well designed, and is a nice value-add that not all manufacturers offer.

Our open test bench is comprised of an AMD Ryzen 7 2700X CPU, Gigabyte Aorus X470 Gaming 7 Wifi motherboard, 2x8GB of G.skill DDR4 RAM, a 1TB Samsung SSD 860 Evo boot drive, XFX Radeon R9 380X graphics card, and Corsair RM650 power supply. All you need for installation is a SATA cable, which should come with your motherboard, and some some screws, which should come with your PC cabinet. The formatted capacity of the 1TB Samsun SSD 860 QVO was reported as 931.51GB by the Windows 10 Disk Management console.

Starting with CrystalDiskMark, we saw sequential read and write speeds reported as 564.7MBps and 537.1MBps, which exceed Samsung's official specifications. This is also just about as fast as the SATA standard allows, and on the surface, it would seem to be comparable to today's high-performance SATA SSDs including the 860 Evo. Random read and write speeds were measured at 330.3MBps and 313.1MBps respectively.

The Anvil benchmark measures SSD performance on various parameters including access time and throughput, using sequential and random data. We got an overall score of 5,005.93. Today's best NVMe SSDs can reach scores well over 10,000. Once again, we see that the SSD 860 QVO should deliver performance that's good enough for average end-user workloads.

Verdict
Considering Samung's choices of SSD form factor, capacity, and specifications, it seems that the company is trying to create a new market segment. The SSD 860 QVO series is positioned as attractive for its high capacities, but not exactly suitable for long-term archival or enthusiast-class performance. If you want a single drive rather than one small SSD and one large hard drive, this could be a good compromise. It could also let you replace a hard drive that you might be using for your large game and media library. Older laptops with only one SATA bay could get a new lease of life too. Of course, you always need to have multiple backups of all your important data.

Samsung isn't the first or only company working on QLC — Intel launched its SSD 660p internationally earlier this year, and Micron sells its Crucial P1. Samsung has also announced plans for a premium NVMe SSD using QLC, and we'll have to wait and see how well this kind of flash is suited to that market segment. What all three companies have in common is that they develop and manufacture their own memory technology in-house, giving them the first mover's advantage. QLC will undoubtedly become more common as third-party brands begin sourcing chips and controllers.

Editor's note: The price of the 1TB variant has been updated as per information received from Samsung, which had earlier shared that the drive will be priced at Rs. 9,749. The ratings remain unchanged.