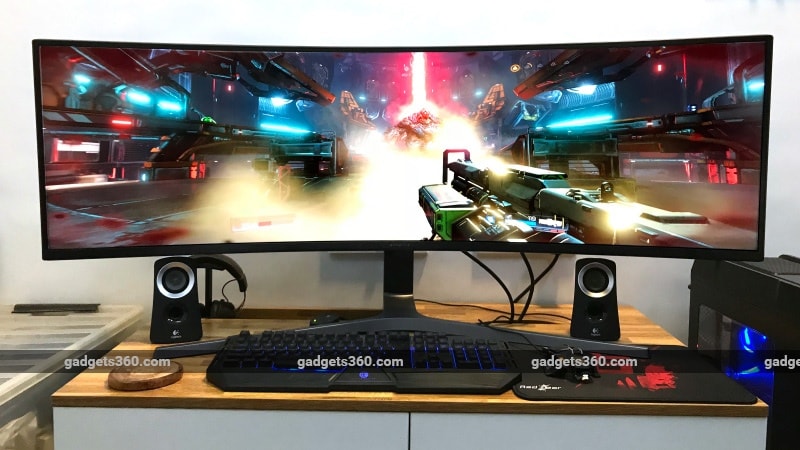 The Samsung CHG90 doesn't look like anything else on the market today. Practicality and compatibility be damned, if you want some serious gamer cred then this monitor truly makes the ultimate first impression. That’s the main reason anyone would buy it, and from what we’ve seen over a few weeks, it delivers every time - no part of your PC gaming setup will look as good as this monitor.

The biggest wow factor is of course the sheer size of this 49-inch curved screen. Then there's its incredibly wide aspect ratio of 32:9, which even makes ultra-wide 21:9 monitors look conservative. Of course, Samsung has smartly added a number of other visual elements such as a ball-and-socket mount on the stand, and a base that’s unabashed about its massive footprint. First impressions aside, does the Samsung CHG90 have the substance to match its undeniable style? Over the course of our long-term review period, that’s exactly the question we’re looking to answer.

You’ll be spending a pretty penny for the Samsung CHG90 (LC49HG90DMUXEN), and the good news is that it justifies that expense just because of its looks. The body is an elegant mix of greys and blacks, with a brushed metal finish on the lower front face and a metallic Samsung logo. The brushed metal finish extends to the sides of the monitor as well.

The screen has a curvature of 1800R, which is pretty steep, and is and ideally optimised for a single user sitting 2-3 feet away. This monitor does eat up a lot of desk space, and our desk, which is more than adequate for a 27-inch monitor, was completely dominated by the Samsung CHG90.

There’s a prominent vent running horizontally across the upper rear, below which you can find the aforementioned ball-and-socket joint that connects the screen to its height-adjustable stand. The socket has a sleek blue LED ring that increases and decreases its brightness based on the audio level in the game. It’s a fun feature to have when you’re gaming in the dark - with the light reflecting off the back wall -but of course, you’ll have to route your PC's audio via the monitor for that.

It’s quite easy to swivel the monitor horizontally and vertically, though the turning radius is limited to just 15 degrees in all directions. Unlike many other monitors, this one is not designed to be used vertically, due to its curvature and size, so height adjustment is also limited.

The stand itself offers a neat cable management system that lets you pass unsightly wires through it, thanks to a removable panel. Unscrew the stand altogether, and you have the option to wall-mount this monitor using the bundled VESA adapter.

With a resolution of 3840x1080, which is the equivalent of two full-HD monitors placed side-by-side. The QLED display supports a peak brightness level of 350 nits, which might not seem like much for a TV, but for a monitor with a much lower viewing distance, it can get very bright. Being a QLED display with high peak brightness, it supports HDR10 as well.

The panel has a 144Hz refresh rate for ultra-smooth motion in games, and a 1ms response time, making this monitor good for gaming. Moreover, it supports local dimming so the black level can get quite deep in dark scenes. The peak static contrast ratio of the panel is 3000:1.

The Samsung CHG90 supports AMD’s FreeSync 2 technology as well, which promises variable refresh rates and HDR for a better gaming experience, but we didn’t get a chance to put that to the test, as our test rig had an Nvidia GPU.

As for connectivity, the monitor has quite a number of options including two HDMI 2.0 ports, DisplayPort, Mini DisplayPort, a 3.5mm headphone jack, and a 3.5mm audio input. Besides these, it also has a USB hub with two USB 3.0 ports at the rear, which isn’t exactly easy to reach.

A monitor with this many features needs a good on-screen menu. Thankfully the CHG90 doesn’t disappoint. The OSD comes on with a press of the power button, and offers a comprehensive list of options to set up the monitor to your preference. You can optimise the brightness and refresh rate, turn FreeSync on or off, and also control other options such as USB power and the blue lighting effect.

Besides the menu, you also get control of the source and PBP (picture-by-picture) mode, allowing you to use multiple inputs side-by-side — think of it as two desktop monitors, without any space in between. Aside from power, there are also three quick-access buttons below the screen to let you switch between different presets that can be customised to your needs.

There's very little that’s designed to accommodate the 32:9 aspect ratio, aside from gaming, and that too, only a select number of games. It’s up to the developers to decide how much they want their games to scale, and from our experience, most of them max out at 21:9. Some first-person shooters we tried - such as Doom and Destiny 2 - scaled to the full 32:9 resolution, letting us take advantage of the wider viewing area.

In games like these you have a VR-like effect, to the point that you literally have to turn your head from left to right to see what’s at the extreme ends of the monitor. It takes a bit getting used to the additional viewing area, but once you do, it’s an advantage you will miss when you move back to a standard aspect ratio.

In strategy games, the wider viewing area is a huge asset, giving you a clear view of the playing field. We tried Halo Wars 2, which fit perfectly across the screen (except in cutscenes, where the top and bottom were cropped out to fit the width). Though the horizontal resolution is pretty much what 4K has to offer, the larger screen gives you a much better perception of the location, so when enemies emerge from the shroud of war, you’ll notice immediately.

Other games like Overwatch and Middle-Earth: Shadow of War scaled only to a maximum aspect ratio of  21:9, and the resolution topped out at 2560x1080, resulting in black bands on both sides of the display. This does give you a smaller image and seems a bit underwhelming, especially because of the relatively low height of the display (14.54 inches).

Aspect ratio aside, the Samsung CHG90 does a pretty incredible job of smoothing out in-game motion thanks to its 144Hz refresh rate. The QLED panel also does a great job of making colours pop in games. Destiny 2 has excellent in-game HDR that the monitor took full advantage of, bringing out details from areas that would normally appear burnt-out.

Just like the aspect ratio, HDR at close quarters is another thing to get used to, especially when extremely bright lights come up on screen. The good news is that the number of games that support HDR is constantly on the rise, so it will be great to be ready to take advantage of that with hardware that supports it.

Aside from gaming, if you’re expecting to use the monitor for movies and TV shows, the aspect ratio will always work against you. Movies do tend to vary in aspect ratios, but none go wide enough to accommodate a 32:9 panel. No matter what you watch, you will get black bands on the sides.

Even the HDR performance in films paled when compared to high-end HDR-capable TVs, in terms of peak brightness and overall colour fidelity. This monitor was clearly designed to be used by no more than one person at a time, so it doesn't work well for watching a movie or a TV show with a group of people.

As a work desktop, the CHG90 can make you very productive. You can comfortably open three regular-sized browser windows, with each of them showing uncompromised versions of the sites you’re looking at. You can even push that up to four simultaneous windows if some of them don't need to be as wide, such as chat windows.

With Samsung’s native Easy Setting app you can easily snap windows to one of the pre-selected grid options or customise your own window-layout setup. Of course, there’s also Windows 10’s snap feature that makes it pretty easy to define spaces for each window, filling up your screen area without much effort.

Sitting up close when using this as a general-purpose desktop monitor, we had to reduce the brightness, and the low pixel density did become evident. This makes us feel that Samsung could have pulled off an even higher resolution at this size.

Verdict
The Samsung CHG90 is obviously  not a product for everyone. It’s not even a glimpse of what the future of computer displays will be like. It’s not practical for most people's desktops, or as an overall entertainment display. At its price of Rs. 1,50,000, it’s more expensive than a lot of very large 4K HDR TVs too. Yet it is highly impressive the first moment you lay your eyes on it, and continues to impress when you play games that take full advantage of it.

The advantage of 144Hz is quite obvious and HDR in gaming is just downright gorgeous. Connect this to a monster gaming rig with a Nvidia GTX 1080Ti or AMD Radeon RX Vega 64 graphics card (which will also add FreeSync 2 support), and this will arguably offer you the best PC gaming experience you can get today.

Buying this monitor would be like buying a Lamborghini. It doesn’t do everything and it’s definitely not the most practical or budget-friendly option for everyday use, but when it does get a chance to spread its wings, it’s an experience you’ll never forget. Just like a sports car, the Samsung CHG90 is sure to turn heads and spark conversations with everyone who sees it. You can’t let practicality come in the way of that, can you?