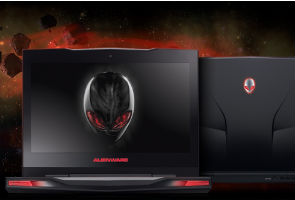 Highlights
At first glance, the Alienware M11x lookslike it's leaped out of a Transformers movie. But does it qualify as Autobot or will it die a Decepticon's death?

Packaging and Contents
The packaging of the device has all the bells and whistles you'd expect from an Alienware device. It comes in a rather large briefcase-like box that is divided into two sections. The first houses the 11-inch device and the second has the manuals, charging cord, adaptor and installation CDs - which is kind of weird, seeing as how the device doesn't have a CD drive! Though you do have the option to pick up an external drive when you purchase the device.

First Impression
You'd expect an 11-inch compact device to be pretty light but, since this is a gaming machine, it is rather heavy, weighing in at about 2kgs. It has amasculine build but with enough curves to make it an attractive machine. Using the M11x in public is a guaranteed attention-getter.

Multimedia
The Alienware M11x has an 11.6-inch WXGA display with a resolution of 1366x768, which is great for watching 720p HD movies. We ran a couple of full HD movies on the device and they played very smoothly without any hiccups. The audio output from the device was extremely good. The Klipsch speakers deliver crisp and clear output and the audio doesn't distort at high frequencies.

The inclusion of 2 headphone ports on the device is a nice touch usually found on most Dell laptops, as it gives you the freedom to attach two pairs of headphones without the need of a splitter.

Gaming
This is the reason why you will buy themachine and this is also where the device is a bit of a let down. Don't get us wrong, the horsepower under the hood will easily run any game you throw at it. But the keyboard feels cramped, the screen is too small to take advantage of the maximum output offered by games and the absence of a CD drive means you would have to use a disk image to run the game without the CD or download a digital copy. Quite problematic.

The customization options on offer are really cool. You have an array of colour options to choose from for the backlight of the keyboard, speakers, Alienware logo and the Wi-Fi indicator. This rates among the top features offered by Alienware.

Despite its drawbacks, the device does deliver with the games. On the 3D mark the device scored a whopping 8326. We played a bit of Crysis 2 and Portal 2 on the machine. We bumped up the graphics of the games to their maximum settings. Portal 2 ran virtually without any hiccups. Crysis 2 however faced a jitter every now and then and the frame rate dropped when the high octave action sequences took to the screen. Dropping the settings down to medium however ensured that Crysis 2 ran a lot better.

When the graphical capabilities of the device are pushed to their limits, the device can get rather noisy.

If you are a fan of the orchestral music used in games like we are, then you will undoubtedly appreciate the speakers of the M11x while gaming. The opening musical score of Crysis 2 sounded breathtaking and the painful taunts by GlaDOS in Portal 2 were crisp and clear.

Performance
With all the extreme hardware, the startup time of the device isn't great. It took a complete minute and 15 seconds to start up. On the PC Mark Vantage x64, the device had a score of 6743.

Performing as a standalone notebook, the Alienware M11x is a mixed bag. The keyboard looks stunning with its customizable backlight and the keys are really soft to type on. On the other hand, the keys on the keyboard are very cramped. You will inevitably keep hitting the wrong keys for quite some time before you get used to it.

The trackpad is fairly sized for an 11-inch notebook and the left and right click buttons too are fairly large and comfortable. The trackpad has a textured finish, which makes it comfortable to use.

In terms of connectivity, the device has two USB 2.0 ports to the right accompanied by two headphone ports and a microphone jack. The left of the device houses one USB 2.0 port, Ethernet port, card reader, display port and HDMI out. Despite being such a high-end machine, there is no USB 3.0 port.

There are 5 LED lights at the bottom of the device that indicate the battery level on the M11x. We wish that Alienware had taken a leaf out of Apple's thinking cap and placed this indicator on any of the side panels of the device just like the MacBooks. Frankly, it's very inconvenient to turn the device around to check the charge status while the device is turned off.


Verdict
The Alienware M11x is a great notebook but falls just that bit short. Its hardware and build quality is perfect for gaming but it lacks in ergonomic structure. If you absolutely must have that second portable gaming rig for your traveling needs then the M11x is worth a look. But if you are looking to pick up a laptop as your primary gaming machine, take a look at the Alienware M14x or at the high-end machines from the Asus, Acer, Toshiba, HP and MSi stables.