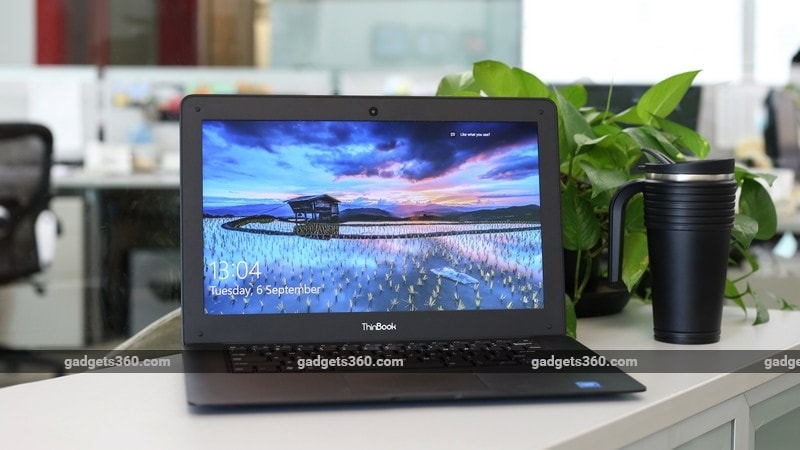 Today, you can find a decent variety of budget laptops under Rs. 15,000, all of which are built only for Internet usage and other light workloads. These could be good options for students, or if you simply need a second computer at home.

Most of these laptops, like the Acer Aspire One Cloudbook 11 which we recently reviewed, follow similar guidelines in terms of specifications, with the only differentiating factor between brands being the design. Display sizes are generally around 11.6 inches, with a few 14-inch models available. However, there hasn’t been a 14-inch Windows laptop under Rs.10,000, until now.

Hyderabad-based RDP has recently launched its first consumer laptop, called the ThinBook (1430) at Rs. 9,999 with the kind of specifications we’ve come to expect from this segment, but with a 14.1-inch display which should be good for productivity. That sounds like a very good recipe, but our review will show how true that is.

RDP ThinBook design and build
The RDP ThinBook doesn’t pretend to be anything other than what it actually is – a low-cost laptop. Having said that, the aesthetics are far from cheap or tacky; instead, it looks pretty decent considering the tight budget it was built to fit. The fit and finish of the plastics is good, which makes the device relatively sturdy. The dimensions are similar to those of an Ultrabook, with the thickest end measuring around 20mm and the entire laptop weighing roughly 1.4kg.

The 14.1-inch display has a 1366x768-pixel resolution with decent colour reproduction. The glossy panel is prone to reflections which is annoying at times. Although the vertical viewing angles are poor, the horizontal viewing angles are not that bad. The hinge isn’t very sturdy and the display wobbles even if flicked lightly. This can be an issue if you ever use the ThinBook on the move, like in a car. Brightness is also decent, however, the keyboard lacks shortcuts for brightness control.

In terms of connectivity, you get USB 3.0, USB 2.0, Mini-HDMI, a headphones socket, a microSD card slot, and a charger socket. While we appreciate the microSD card slot, we would have liked a full-sized SD card slot instead. The palm rest area is spacious and the there’s a generous trackpad too. Tracking performance is far from ideal though since the surface isn’t very smooth. This also impedes the use of multi-finger gestures. The trackpad buttons are quite stiff, and take some effort to press.

The chiclet keys are well spaced out but the keyboard area itself has a certain degree of flex, which is evident once you begin typing. We felt that the keys had too much travel and felt too spongy for comfortable typing. There are LED status lights above the keyboard for power, caps lock and num lock, followed by two holes for microphones.

The stereo speakers are placed on the bottom and fire downwards. The base is completely sealed off with no air vents. The lid of ThinBook bends backwards nearly 180 degrees, giving you enough flexibility for any typing position. The laptop ships with a 12.5W power adapter, which is only slightly larger than the average smartphone charger.

RDP ThinBook specifications and features
RDP has gone with a fairly efficient Intel Atom x5-Z8300 SoC, which we’ve also seen inside the Notion Ink Able 10 (Review). This quad-core chip runs at 1.4GHz with the ability to turbo up to 1.8GHz, when the workload demands. It’s built on the 14nm fabrication process and has a TDP of under 4W, which is how the device is able to get away without any active cooling.

Like with most other laptops in this segment, you get 2GB RAM, a 32GB eMMC for flash storage, Wi-Fi b/g/n, and Bluetooth 4.0. The inbuilt storage can be expanded by up to 128GB using a microSD card. The laptop also has a VGA webcam, whose quality is pretty average.

The ThinBook runs on Windows 10 32-bit, although RDP also sells a DOS version of this product at Rs. 8,999. There’s absolutely no bloatware pre-installed other than the default universal apps that come with Windows.

RDP ThinBook performance
General Windows performance is acceptable but certainly not the smoothest. There’s a very slight but noticeable stutter even when doing basic things like resizing or moving windows around on screen. The retail unit that we received exhibited some odd behaviour, for example the Start menu and search box would intermittently stop working, forcing us to reboot. The USB ports would sometimes lose connection with a hard drive that was plugged in, midway through copying files.

On the other hand, boot time was fairly good, with the laptop up and ready in a matter of seconds from the time you hit the power button.

The weak performance is reflected in benchmarks too. PCMark 8 returned scores of 1329, 1354 and 1390 in the Home, Creative and Work test suites, which were a tad lower than what the Notion Ink Able 10 managed with the same CPU. The CPU tests in SiSoft Sandra also told a similar story. The read and write performance of the flash storage was also not very good, as the sequential write bandwidth averages to about 56MB/s, while other devices such as the Cloudbook 11 and Able 10 both averaged around 80MB/s. Copying files from an external device to the laptop can be a painfully slow experience. 3DMark also returned a low score of just 192 points in the basic Fire Strike test.

The trackpad can be really annoying, as the cursor tends to jump around on screen when you try to use the left mouse button and drag to select anything. The display is actually not bad for watching videos, although text does appear very jagged so it’s not the best for reading.

The speakers get decently loud but audio quality is below average, feeling tinny and shrill at high volumes. Also, the right speaker on our unit was louder than the left one, which made for a rather odd listening experience. Thankfully, the CPU can handle decoding 4K videos with ease thanks to its dedicated media decoding logic.

RDP claims 8 hours of battery life on the ThinBook , which is in fact possible. In PCMark 8’s battery test, we got 7 hours and 57 minutes, which is more or less the same result we got with actual mixed usage.

Verdict
At Rs. 9,999, the RDP ThinBook makes large-screened laptops a lot more accessible and therefore offers pretty good value for money. It does require lots of compromises, but truth be told, it’s not that bad for a first attempt. The build and finish are reasonably good; the device itself is fairly slim and light; the display is good enough; and you can enjoy 4K media playback as well as get light work done.

RDP plans on launching more powerful variants of the ThinBook, and in time, hopes to bring the cost down even further by shifting manufacturing to India. We hope that future versions improve upon some of the shortcomings of this model. For instance, we would like to see a better trackpad as there might be times when you won’t have a mouse with you. The internal flash storage also needs to have better read and write speeds, which would boost the overall performance of Windows and have a big impact on how well programs respond.

The RDP ThinBook will certainly stir up the competition in this segment and we hope to see more such laptops from other players soon. Keeping in mind the tasks it’s designed for, we feel the ThinBook has very good potential and could be a good, inexpensive laptop for those who would never have been able to afford any kind of PC before.