The Nighthawk series of routers is Netgear’s high-performance series of routers and the Nighthawk Pro Gaming XR500 router is the latest entrant in the space that’s seen a lot of attention from PC manufacturers and consumer electronic brands alike. This time around its partnered with Netduma, makers of the DumaOS, that’s labelled to be a feature packed operating system specifically targeted at fixing problems gamers face. But how good is the entire Nighthawk Pro Gaming XR500 router package? We find out.

The design is replete sharp, aggressive angles, and grills aplenty. It avoids the typical gaudy, ostentatious ‘gaming’ industrial design we’ve seen in laptops, PCs, and smartphones thanks to its all-black colour. But it's a fairly large router that will take up a decent amount of space on your desk. With LEDs that indicate Internet, USB, Ethernet, and Wi-Fi connectivity that light it up, it has more in common with stealth bombers than the relatively mundane task of letting you extend your kill streak in Overwatch. Though the glossy grills are a point of concern as they attract dust with ease, ensuring you’ll have to clean it often if you want it to look as good as the day you got it. A switch also lets you turn off all LED indicators but one that indicates its on, for when your room starts to resemble a discotheque.

In the box you get the router, four detachable antennas, an Ethernet cable, a quick start guide, and two power adapters — one with round pins and another with flat pins. You need just one to get it running, and its nice to see Netgear factor in varying power socket types and pre-empt any possible issues by including two types so you don’t have to run out and get an adapter to use it.

Powering the Netgear Nighthawk Pro Gaming XR500 is a dual-core 1.7GHz processor and 512MB of memory that help drive the five Gigabit Ethernet ports (four LAN plus WAN), two USB 3.0 ports, and four WiFi antennas. Netgear claims dual-band speeds of up to 2.53Gbps (800Mbps at 2.4GHz plus 1,733Mbps at 5GHz), the XR500 Pro supports Multi-User, Multiple-Input, Multiple-Output (MU-MIMO) too. In a neat touch, there’s a Wi-Fi button to let you switch it on and off as you see fit. While most of the above specifications may seem nothing out of the ordinary, the real differentiator is in the aforementioned DumaOS. Outside of Netduma’s own R1 router, it’s not available on any other device aside from the XR500 just yet. With it come a host of features such as a dashboard that shows you how and where your bandwidth is being consumed, geo-filter control which controls your lag by limiting the distance to game servers, quality of service (QoS) to let you prioritise bandwidth allocation, as well as a network monitor and device manager that gives you a visual representation of which devices are hogging your Internet.

The latter two are standard features present in other routers though their unique presentation does make this router stand out from the pack thanks to live graphs and networking maps.

Every feature is siloed in its own app called R-App within DumaOS. Netduma claims this allows for a modular approach to design letting it add new features without introducing issues to the overall firmware while allowing each R-App to function independently.

Setting up the Nighthawk Pro Gaming XR500 router was a simple task of replacing the existing WiFi router for our 50Mbps line with it. Logging into router login.net however, showed off an interface that’s far from your usual networking management software.

Each section of DumaOS is filled to the brim with data. So much so that it resembles website analytics tools like Chartbeat or Taboola, except with metrics geared towards how your router is operating. It’s a bit overwhelming to use the first time with graphs, charts, and network maps peppering each and every aspect of it. This kind of approach is the absolute anti-thesis to Apple’s discontinued AirPort Extreme series that had a simple use and forget set up. Here you’re bombarded with data, which is something the pro users would appreciate. 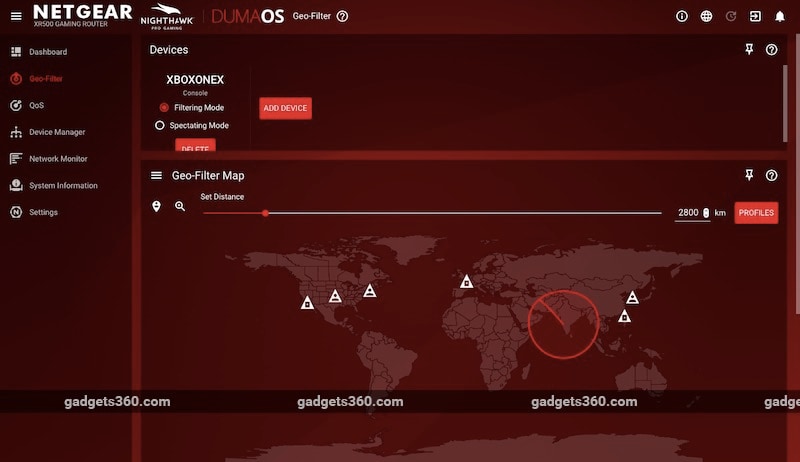 Nighthawk Pro Gaming XR500 router performance
Once we got over the initial information overload, the gaming dashboard gives a handy overview of what your download and uploads are in real time along with CPU usage. There’s also an option to enable or disable R-Apps on startup, useful in the event of trouble-shooting any potential issues.

The geo-filter lets you add devices such as consoles and PCs to be recognised by DumaOS through a dropdown menu containing connected devices. This allows you to limit the range of searching for game servers, letting you connect to those closest to you by choosing your location on a map and limiting the distance for which game servers should be searched for. It’s extremely easy to use and the results were subtle but perceptible.

Firing up Overwatch, Call of Duty: Black Ops 3, and Halo 5 on the Xbox One resulted in slightly faster match making in all three games with lower pings too. This was also evident with Overwatch and Call of Duty: Black Ops 3 on the PS4 Pro as well. It wasn’t a drastic, night and day difference over our existing router but it made for a smoother overall experience. The interface also showed players connected in real time as well as threw up servers that were blocked outside the selected radius. You can tweak the settings so that if a nearby server has poor ping, it can be blocked too.

This feature makes sense for most console games where you have no control over which server location to connect to, but with PC games having a server list to choose from in most cases, geo-filtering is far from a necessity if you play with a keyboard and mouse.

Furthermore, thanks to how geo-filtering is implemented, you’ll need to constantly tweak and fine-tune the settings on a per game basis, you can’t save specific profiles for specific games, and while it does come with pre-determined profiles for a bunch of games like GTA V and Battlefield 1, it doesn’t automatically switch between them. You can use the Netgear Nighthawk app for basic tasks like setting up your router, manage the number of devices connected, and test your Internet speed, but that’s it. You can't tweak geo-filtering or any of the other DumaOS features from it as none of them are present in the app. So if you want to get the best out of this specific option as a PS4 or Xbox One gamer, you’ll want to be next to your PC or laptop at all times to manage these settings. Moving onto the Quality of Service (QoS) feature, it contains a chart representing bandwidth allocation for downloads and uploads. Clicking on a device present here lets you set download and upload limits. QoS worked flawlessly, allowing us to manually cap our colleagues devices’ upload and download speeds at will while playing games or streaming video. It provides a sort of granular control that we’ve seen from other routers as well.

Also found in this section is anti-bufferbloat. This lets you prevent a single device from using all your bandwidth. You can keep it on at all times, turn it off completely, or use it when high priority traffic is detected. In this case, ‘high priority traffic’ refers to games.

Netduma claims that when anti-bufferbloat is used in this setting, it kicks in the moment a console game or PC game has been fired up and reduces available bandwidth to other devices. Using both the PS4 Pro and Xbox One, it worked as it should with no complaints in such scenarios despite having five laptops and smartphones also connected to the same network and is a macro-level approach to making sure gaming is prioritised over all else. To push it even further, we saturated our network with three devices HD streaming video. In-game ping in Fortnite for Xbox One went from 100 to 140. Setting anti-bufferbloat on saw it revert to the usual ping of 100 with an obvious performance penalty to video quality on the other devices along with buffering.

Aside from gaming performance, the Nighthawk Pro Gaming XR500 router performed well with most devices we used with it. These include a variety of laptops, tablets, and smartphones which worked without a hitch unless we enabled QoS options. The range seemed decent too, allowing us to stream 1080p YouTube video without a hitch on a laptop roughly 12 metres from it with a wall in between. The experience was similar on Netflix as well, though fast forwarding did result in a buffer time of a few seconds. 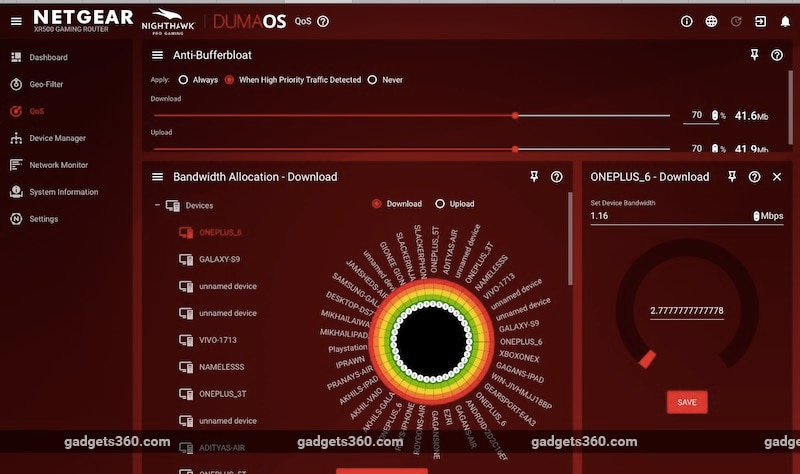 Verdict
Although it’s crammed full of features, the Nighthawk Pro Gaming XR500 router has some obvious omissions. There’s no way to check the bandwidth consumption of each device independently, a glaring omission considering data caps present in countries like India.

And despite receiving several updates, Ping Assist, a much awaited feature for the router isn’t available yet. It’s a slider set in milliseconds and allows you to join servers that fall below the selected value and allows you to join them no matter the distance. It effectively bypasses any geo-filtering settings you may have selected, prioritising lower ping over anything else. At the time of this review the feature hasn’t made it to the Nighthawk Pro Gaming XR500 router though Netgear and Netduma have said it would be coming in a future update. Oddly enough it’s available on Netduma’s R1 router.

However its ease of use and subtle performance improvements coupled with handy additions such as anti-bufferbloat and geo-filtering make the Nighthawk Pro Gaming XR500 router an interesting addition to a space dominated by boring white boxes. If you’re serious about your online multiplayer games on console and don’t mind having to micro-manage each aspect of the experience, the XR500 is worth considering despite its hefty Rs. 20,000 price tag.