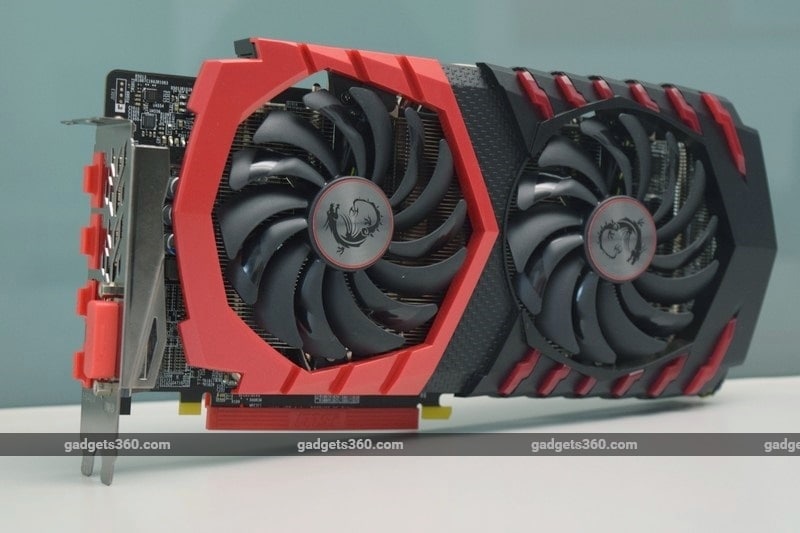 AMD caused a considerable stir with its Radeon RX 480 launch in late June. Initially, the price in India was massively inflated and the company had to make two cuts in less than a month, after it became clear that the company would have no chance against Nvidia. Supplies were limited worldwide, and only a few reference cards were available, with custom designs nowhere in sight for ages. Then it emerged that AMD's reference cards were drawing too much power, which forced the company to release software designed to lower performance in order to reduce power draw.

Things have settled down though, and the Radeon RX 480 has become a popular choice for gamers, more than holding its own against Nvidia's offerings. Performance actually increased with subsequent driver releases, and supply has stabilised. Even better, it seems as though games that are patched to take advantage of DirectX 12 actually do a lot better than benchmarks at launch time indicated. Sure enough, we saw a significant spike in frame rates when playing Doom with DX12 enabled, long after our review of the RX 480 was done.

With its shaky foundation now strengthened, AMD has launched the Radeon RX 470 and RX 460 in India, catering to more price-sensitive buyers. We have the middle sibling for review today, the Radeon RX 470, in the form of MSI's gigantic custom-designed Gaming X card. Read on for more.

The Radeon RX 470 GPU
The Radeon RX 470 is essentially the same chip as the RX 480 with a few of its components disabled and its speeds reduced, resulting in a lower-rung part that can be priced lower. This is a common industry practice which allows companies to salvage chips that didn't make it out of manufacturing in the best shape. Codenamed Polaris-10, this GPU is built on the relatively new 14nm manufacturing process. It is designed with 2,304 execution units which AMD calls "stream processors", and 144 texture units. All of them are enabled on the RX 480, while the RX 470 drops those counts to 2,048 and 128 respectively. Base and boost clocks are also a bit lower, as is the memory speed leading to lower overall memory bandwidth although the 256-bit memory bus itself hasn't been reduced.

All of that works out to a total reduction of pixel-pushing power from 5.8 Teraflops to 4.9, which isn't all that much. Finally, while the RX 480 can be paired with either 4GB or 8GB of GDDR5 RAM, the RX 470 is only officially listed with 4GB. The tradeoff is of course a lower price, but also lower power consumption at 120W as opposed to 150W.

While the RX 480 is aimed at gamers who want to push 2560x1440 or even 4K monitors with reasonably high settings, the RX 470 is more for those who are happy at 1920x1080 and don't see themselves going beyond that within the lifecycle of their next graphics card. If you identify with that second group and don't need a lot of headroom, the amount you'll save on an RX 470 could be very well worth it.

The MSI Radeon RX 470 Gaming X
MSI's custom cards tend to be massive, with much more going on than just a custom cooler. We've seen two variations of this design in the recent past, when we reviewed MSI's GeForce GTX 1060 Gaming X and the much beefier GeForce GTX 1070 Gaming X. The Radeon RX 470 Gaming X is closer to the former in terms of physical heft, which makes sense because these two GPUs have the same rated power consumption. The red and black plastic, the LEDs, and the bundled software are all exactly what we've seen before.

The Radeon RX 470 Gaming X is much larger than a reference card would be. The cooler, which MSI calls Twin Frozr Vi, doesn't need its fans spinning all the time. With light games, you might not see them spin up at all. The company also claims to use "military class" power circuitry components for longer life and more stable operation.

There are two HDMI 2.0b and two DisplayPort 1.4 outputs on the rear, plus one legacy DVI-D port. Interestingly, the card has an 8-pin PCIe power connector rather than the stock design's 6-pin connector, which allows the card to draw more than 150W of power despite being rated at 120W. This might be because of the card's overclocking potential or just to look good following the RX 480's struggles with drawing too much power.

Speaking of overclocking, MSI ships this card with higher-than-default clock speeds. There are three modes to choose from in software: Silent, Gaming, and OC. Silent is the most conservative in order to keep heat and noise down, and this corresponds to the stock speed which tops out at 1206MHz. Gaming raises this to 1242MHz and OC goes just a tiny bit further to 1254MHz, but this mode also pushes the memory clock up from 6.6GHz to 6.7GHz. The card runs in Gaming mode by default, which is how we tested it.

Radeon RX 470 performance
We tested the Radeon RX 470 using the same test bench and methods that we've used for all other GPU reviews so far this generation. The only difference is the driver version; we used AMD's latest 16.9.1 release. We'll be comparing scores with the GeForce GTX 1060 cards we tested as well as the Radeon RX 480. Keep in mind that the RX 480 sample we received was a reference unit, while our MSI Radeon RX 470 Gaming X sample is overclocked and has a more aggressive cooler. The hardware is as follows:

Unigine's Valley test ran at an average of 47.3fps with a minimum of 25.9fps at 1920x1080 with the Extreme preset. This also bodes well for full-HD gaming. Star Swarm, a frenetic space battle simulation, ran at 43.7fps in DirectX mode and 67.98 with AMD's Mantle optimization enabled.

Ashes of the Singularity runs in DirectX12, and its built-in benchmark helps us compare different hardware under identical conditions. We saw 65.2fps when running at 1920x1080 using the Standard quality profile, and just 30fps when we tried 4K using the Extreme profile, as we have done with this generation's higher-end GPUs. While GPUs above this level have been able to run some games at 4K and output reasonably quality, we wouldn't recommend pushing the Radeon RX 470 quite that far. 2560x1440 should be possible, and you should consider that a happy bonus for what you're paying.

Deus Ex: Mankind Divided is a new DirectX 12 game, and we took its built-in benchmark for a spin. Using the High graphics preset at 1920x1080, the game ran at an impressive 57.8fps average and didn't drop below 46.1fps. Interestingly, switching to DirectX 11 didn't affect scores much; the average did drop but only to 52.9fps.

Metro: Last Light Redux is one of the more graphically demanding titles in our test suite, and also has a replicable benchmark. We ran it at 1920x1080 using the Very High quality preset, and managed an average of 45.88fps, though the minimum dipped as low as 11.04. Odd spikes and dips can be seen at intervals throughout, indicating uneven frame delivery.

GTA V is a classic, and will be popular for years to come. We were happy to see an average of 77.96fps at 1920x1080, though quality settings were dialed down considerably compared to higher-end graphics cards. The experience was enjoyable, but we were aware of what we were missing out on.

Doom is one of our favourite games to test with, not only because of its frenetic pace but also the fact that it runs beautifully on even mid-range hardware. We started off in the default OpenGL 4.5 mode, with the Ultra quality preset at 4K resolution and managed a fairly decent run with an average of 26fps but mild tearing. We then switched to the new Vulkan rendering mode which it was enabled with a patch shortly after we reviewed the Radeon RX 480. Vulkan was developed by AMD and gave the RX 480's scores a nice boost so of course we were interested in seeing how it scaled to lower-end hardware. We can report that frame rates certainly did increase to an average of 35fps as observed using the game's own reporting tool. We'd still advise turning the resolution and quality down in order to hit higher, more consistent frame rates.

Far Cry 4 played very well in manual run-throughs at 2560x1440 even using the Ultra preset, giving us a solid 58fps average. Frame times were inconsistent but not to the point that we noticed tearing or artefacts on screen. Turning the resolution down to 1920x1080 raised the frame rate to a superb 102fps.

Rise of the Tomb Raider is somewhat demanding, but we had a perfectly enjoyable experience with no visible choppiness at 1920x1080 using the High quality preset. We raised the resolution to 4K to test scaling, and the frame rate dropped to just 25fps with noticeable lags during portions of our run which had more action going on.

On the other hand, Battlefield 4, our last game, is known to scale well to low-end GPUs, but the Radeon RX 470 did show us its limits. We managed a solid 70fps at 1920x1080 using the Ultra preset, but pushing up to 4K brought us down to 24fps with very uneven frame pacing. The game was still playable, but not as smooth as it could have been.

Verdict
We've been marveling at the kind of power delivered by Nvidia and AMD's recent high-end launches. In fact, we struggled to find situations that challenged the GeForce GTX 1080 and GTX 1070 even at 4K with all the settings turned up to their maximum levels. In reality though, most gamers don't need performance to push resolutions beyond 1920x1080 and it makes a lot of sense to save money now and upgrade to a more modern GPU a year or two down the line. You'll be perfectly fine with a Radeon RX 470 card if you're planning to stick with 1920x1080, or even if you think your next monitor might be a 2560x1440 model.

AMD's recommended price for stock Radeon RX 470 cards with 4GB of RAM is Rs. 15,990 and custom-cooled versions like MSI's will cost more. AMD's partners are also free to sell cards with more than 4GB of RAM, so you will see 8GB Radeon RX 470s for sale. The 8GB version costs Rs. 20,900, so we'd recommend the 4GB version since you aren't going to be pushing games or resolutions that can take advantage the increase in RAM, at least in the short term. If you think you can spend more money, look for cards based on the 6GB GeForce GTX 1060 instead. We're still expecting Nvidia to announce lower-end GPUs to flesh out its product stack, so the competitive landscape could change again in a month or two.