Lenovo launched an innovative ultraportable laptop a couple of years ago called the Yoga Book. It replaced the physical keyboard with a digitiser for taking notes, which doubled up as a touch keyboard when needed. While it did have a relatively reasonable price tag, the Intel Atom processor severely limited its ability to be a proper multimedia laptop.

At IFA this year, the company launched a new version of the Yoga Book, called the Yoga Book C930. It’s slim, light, more powerful than the previous model, and features an e-ink display in place of the digitiser. In fact, Lenovo claims that it’s the thinnest and lightest dual-screen laptop in the market. We had some hands-on time with it at IFA 2018, and these are our first impressions of the Yoga Book C930.

The new model has stayed true to its name, and just like before, it feels no heavier than holding an actual book. When closed, the Yoga Book C390 measures just 9.9mm in thickness. Both the Wi-Fi and LTE models weigh under 800g, which is lighter than Apple’s 12-inch MacBook. It also has a aluminium body, which feels extremely sturdy. Lenovo’s signature watchband hinge lets the Yoga Book C930’s display fold all the way around, 360 degrees, allowing you to use it as a tablet or e-reader.

The e-ink display is what makes the C930 very interesting. It uses a Mobius panel from the company E Ink, which supports multi-touch and digital pen input with up to 4,096 pressure levels. The e-ink display doesn’t require a lot of power to run and can be used as a keyboard with trackpad, an e-book reader, or a surface for sketching. Switching between these modes takes a couple of seconds, similar to older Kindles.

However, in keyboard mode, there doesn’t seem to be any noticeable lag when you type. We did a little typing test and letters appeared almost instantaneously on Windows’ Notepad, as we tapped each key. Typing very quickly does introduce some delay, though. It’s a little tricky to type at your normal speed without the physical feedback of actual keys. As a result, we also ended up with a lot of typos.

Lenovo predicted that this would be an issue for many, so the C930’s keyboard offers visual confirmations of a key presses along with haptic feedback and a keystroke sounds from the speakers. It feels a little weird at first, but over time, we could get used to it. Since the keyboard is displayed on a screen, you can have up to 30 different layouts for different languages. It also claims to have self-learning algorithms to help you make fewer errors over time, by learning your typing style. 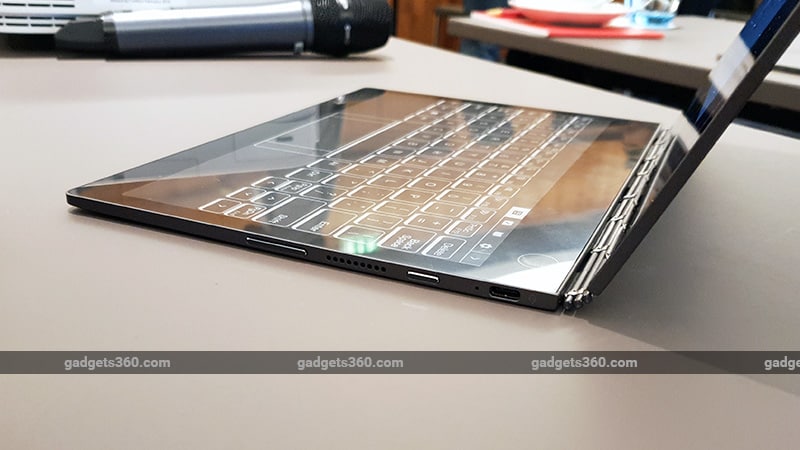 We didn’t get to use the Lenovo’s Precision Pen on the e-ink display but we did doodle a bit using our fingers, and there wasn’t any noticeable lag. Text looks relatively sharp when reading a e-book, thanks to the full-HD resolution. The primary LCD display is an IPS panel with a QHD resolution and multi-touch support. We found the brightness to be very good, and colours were vibrant and punchy.

Making the Yoga Book C390 this thin and light also introduced another problem when it came to opening the lid. Lenovo said that this was one of the complaints it received with the first model, which is why the C930 has a new ‘knock-to-open’ feature that pops the lid a open tiny bit, just like the boot release mechanism of a car. You have to knock twice near the edge of the lid to trigger this. If you choose not to open it, it automatically closes after a few seconds. The unit that we tried this on was a bit temperamental but it did work for three out of five tries. The Yoga Book C930 uses an accelerometer to detect the knock gesture, after which a current applied to a memory-shape alloy that changes the polarity of magnets holding the lid in place, thus pushing it open.

The Yoga Book C930 uses an Intel Core m3 processor but you can opt for a Core i5 ‘Y-series’ CPU. You get 4GB of RAM, which is a bit too little for us, and there’s up to 256GB of SSD storage. You get better connectivity this time around, with two Type-C ports (USB 3.1, Gen1) and a microSD/SIM card tray depending on which model you pick, but there's no headphone socket. 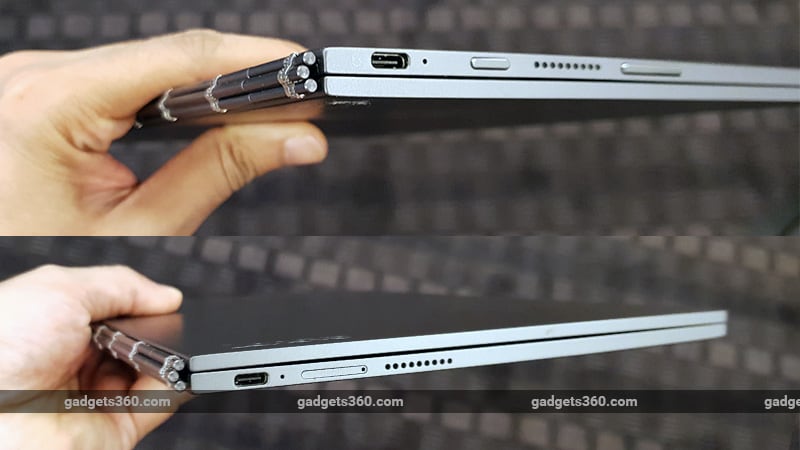 The new Yoga Book C930 is yet another interesting concept of what the laptop of the future could look like. While many skeptics might disagree, just look at what happened to the physical keyboards on phones. There’s going to be a definite learning curve at first, but on the upside, wouldn’t it be great if your laptop keyboard could autocorrect your typing or even predict the next word? The price for a glimpse in to the future isn’t cheap. The You Book C930 starts at €999 (approximately Rs. 80,000), which makes it more of a premium offering than its predecessor.

Lenovo has made some notable improvements with this new iteration, but the real challenge remains convincing users to adopt a new style of computing.

Disclosure: Lenovo sponsored the correspondent's flights and hotel for the trip to IFA, Berlin

Roydon Cerejo Email Roydon Roydon Cerejo writes about smartphones and laptops for Gadgets 360, out of Mumbai. He is the Deputy Editor (Reviews) at Gadgets 360. He has frequently written about the smartphone and PC industry and also has an interest in photography. With over a decade of experience covering the consumer technology space, he is also an avid sci-fi movie and TV show geek and is always up for good horror flick. Roydon is available at roydon@gadgets360.com, so please send in your leads and tips. More
Xiaomi Releases MIUI 10 Global Beta 8.8.30 for 25 Smartphones; Fixes WhatsApp, Telegram Double Notification Issue
There Is Big Money to Make in Space Business: Antrix Chairman S. Rakesh

product Lenovo's new Yoga Book C930 laptop features dual screens, LTE connectivity and a unique locking mechanism. Is this the laptop of the future or just another experiment?