Hybrid laptops or 2-in-1s can be incredibly fun and versatile devices, if done right. Lenovo has had its fair share of success with the Yoga series, mostly due to the fact that it has a device for most price brackets, not just the high-end segment.

Today, we’ll be testing its flagship bendable laptop, called the Yoga 900. This 13-inch model competes with other Ultrabooks such as the HP Spectre 13 and Acer Aspire S13. Priced between these two competitors and armed with the same core specifications, let’s see if the Yoga 900 can make a compelling case for itself.

Lenovo Yoga 900 design and build
It’s evident from the moment you pick it up that this is a premium laptop. Most of the chassis is built of plastic, which has a nice rubberised texture to it, but then you get champagne-coloured metal plates for the lid and the bottom, which give the device rigidity. The branding is tastefully done too, which adds to the premium look and feel. 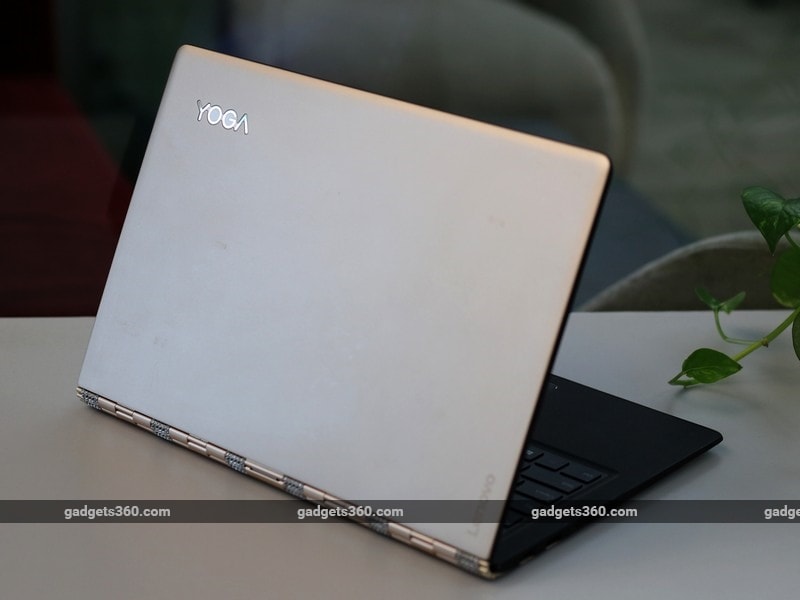 Even in the latest refresh, the Yoga 900 sticks with its trademark articulating hinge, which has very good torsion, thus eliminating most of the screen wobble, no matter the angle. The device feels a bit heavy, even though it weighs only 1.3kg, and it’s quite slim at 14.9mm.

The stereo speakers are placed on the bottom towards the front, one on each side, and there are four rubber feet which help keep the laptop stable on flat surfaces. The rubberised lining of the chassis protrudes slightly outwards along the edges of the display and the base in order to provide grip when you use the Yoga 900 in different positions. 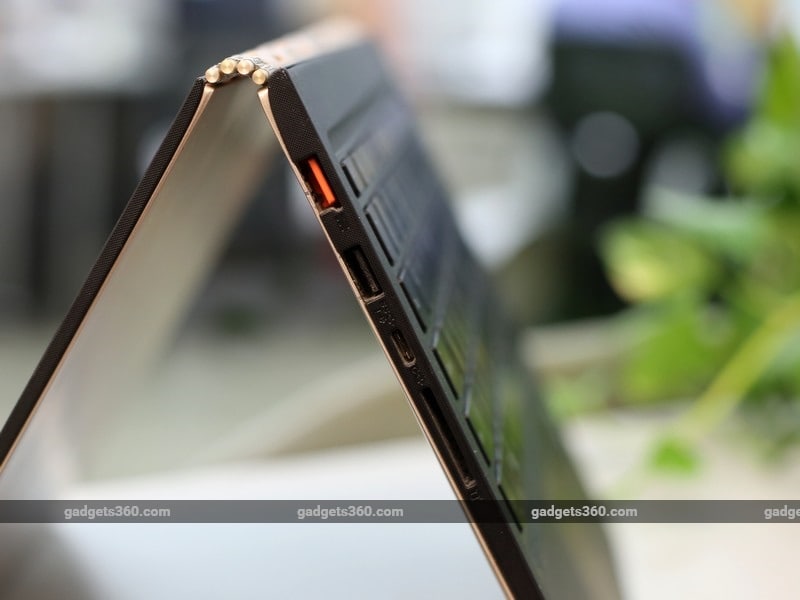 Peripheral connectivity is taken care by two full-sized USB 3.0 ports and a Type-C USB 3.0 port that supports native DisplayPort 1.2 video output as well as VGA and HDMI via adapters. You also get an SD card slot, headphones socket, a button to lock the screen rotation, and a power button along the edges. We think a volume rocker also would have come in handy, especially when the device is in tablet mode.

Speaking of modes, you can use the Yoga 900 as a regular laptop or rotate the screen all the way till it's flat against the back of the lower half to make it a tablet. ‘Tent’ and ‘Stand’ modes are both useful when you want to want to interact with the device through the touchscreen but keep it on a flat surface. 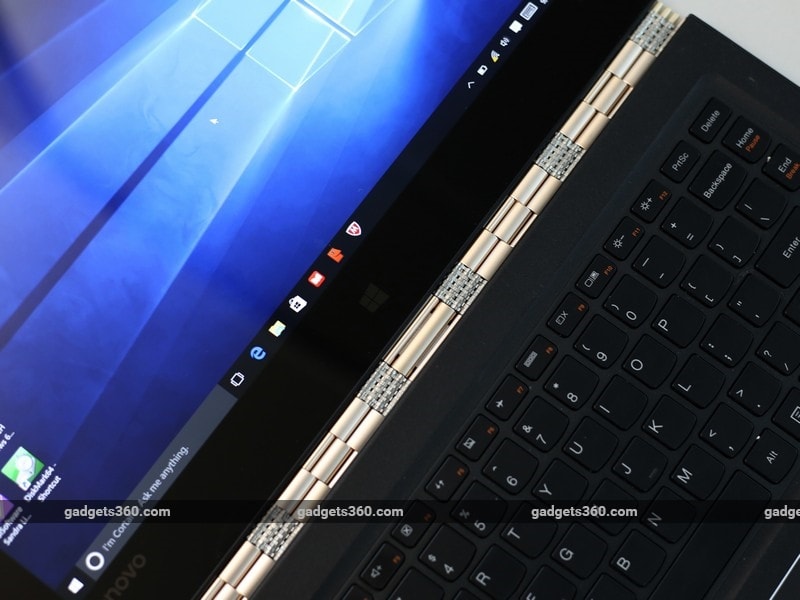 The real show-stopper, however, is the Yoga 900’s fantastic display. The 1800x3200-pixel resolution on a 13.3-inch IPS panel serves up a density of 276ppi, which has quite a few other Ultrabooks in this segment beat. Coupled with high brightness levels and good viewing angles, colours are vivid and saturated, and text is crisp. The glossy panel is prone to reflections but when images and video look this good, we can live with this little niggle.

Lenovo laptops have always had good keyboards and this one is no exception. The chiclet keys have very good tactile feedback with no flex, and the backlighting is even across the board. We would have liked a longer right ‘Shift’ key as it’s easy to mistake the arrow key for it. The trackpad is decently sized and works well. There’s a single button for left and right mouse clicks. Overall, we really like the Yoga 900 for its design, interesting choice of materials for the chassis, and very good display. 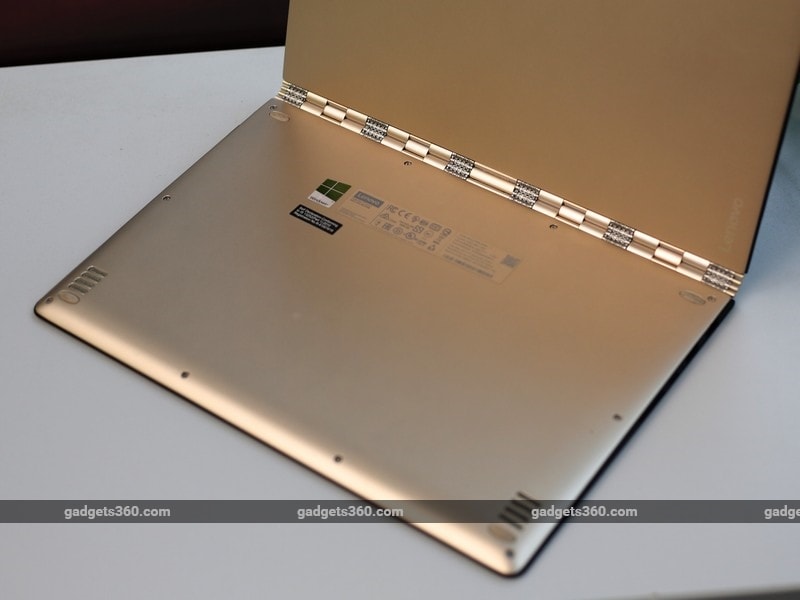 Lenovo Yoga 900 specifications and features
According to Lenovo India’s website, the model we’re testing is the only SKU that’s currently available in the country. With this, you get an Intel Core i7-6500U CPU, 8GB of RAM, and a 512GB SSD. There’s also Bluetooth 4.0, Wi-Fi b/g/n/ac, an HD webcam and JBL speakers. The specifications are similar to those of the other Ultrabooks we’ve recently tested, so you should expect similar performance too. 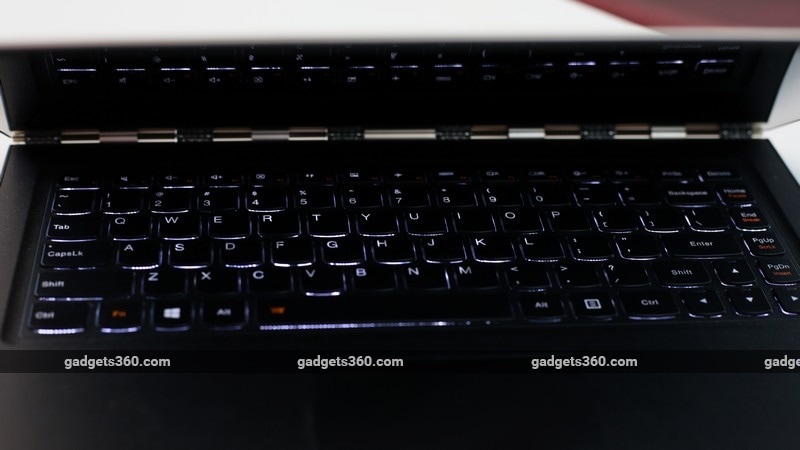 The Yoga 900 ships with Windows 10 Home 64-bit along with pre-installed software from Lenovo. Unlike some OEM software that isn't very useful, the Lenovo Companion is a well-designed app that gives lets you keep tabs on the health of the system, update drivers, get support information, and perform regular maintenance tasks – all from a single window. There’s also OneKey Recovery, which can be activated with the dedicated button on the side; Photo Master for organising your pictures; and SHAREit and REACHit, which let you transfer files to other devices and access multiple cloud storage services, in one place.

Lenovo Yoga 900 performance
With these beefy specifications, general Windows performance is very good. The Yoga 900 boots quickly and is able to handle most demanding apps. You can even get away with a bit of gaming. During all this, the bottom rear gets slightly warm but that's about it. Thankfully, the palm rest area stays cool throughout so productivity is rarely interrupted. The exhaust vent is neatly camouflaged in the hinge, giving the laptop a clean look. 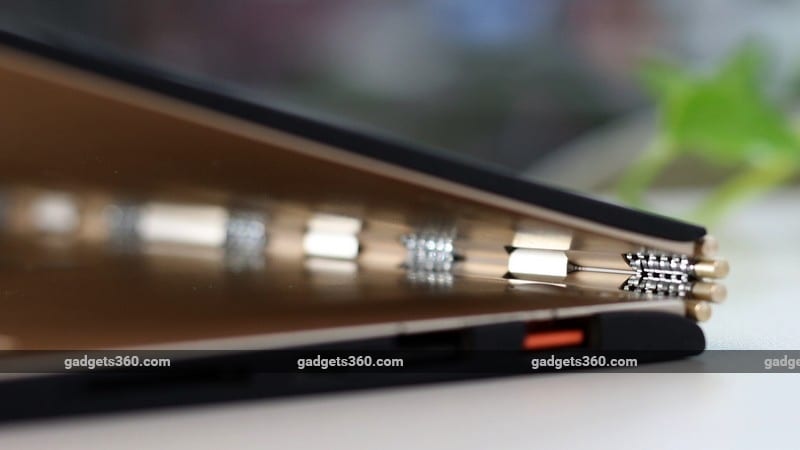 Benchmark scores are good, although some CPU scores were tad lower than those posted by other Ultrabooks with the same specifications. The Samsung SSD delivers very good read and write speeds with the average sequential read bandwidth topping out at 477MB/s while the write speed topped out at 409MB/s. PCMark 8 returned scores of 2551, 3384, and 2550 for the Home, Creative, and Work test suites respectively.

What we love about this laptop the most is that there’s rarely an uncomfortable position to use it in. It can adapt to nearly any sitting posture you might fancy and there’s always tablet mode when all else fails. The Yoga 900 is a bit too heavy to be used as a tablet for long stretches, but the ‘Tent’ and ‘Stand’ modes are good when you need the touchscreen. The 10-finger touch panel has good sensitivity too. 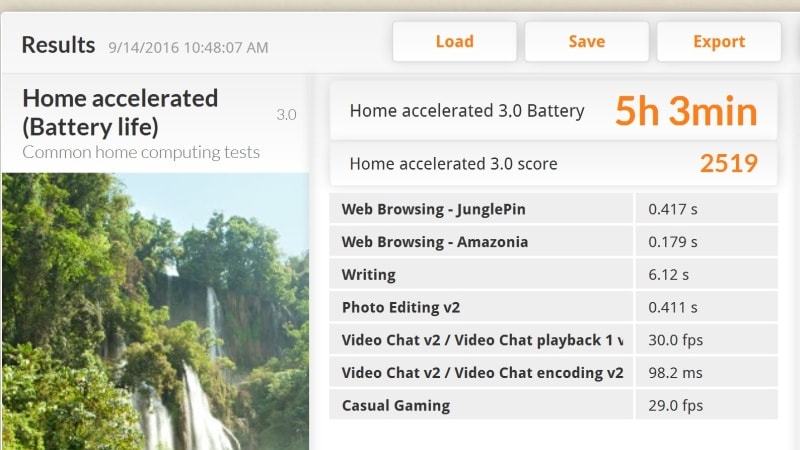 Just like the Acer Aspire S13 and HP EliteBook Folio G1, the Yoga 900 has an excellent set of speakers, which sound best in laptop mode. However, the overall volume and sound stage diminish noticeably when you switch to the ‘Tent’ or ‘Stand’ modes, and is the worst in tablet mode. The speakers need a surface to reflect sound off. There's also a Dolby Audio optimisation app for tweaking the sound.

The 66WHr battery ran for 5 hours and 3 minutes in PCMark 8’s battery test, which simulates real-world usage patterns. During actual usage, we were able to stretch it up to 7-8 hours, but this was without doing anything too graphically intensive. As long as you stick to medium or light workloads, the laptop should last you an entire work day. 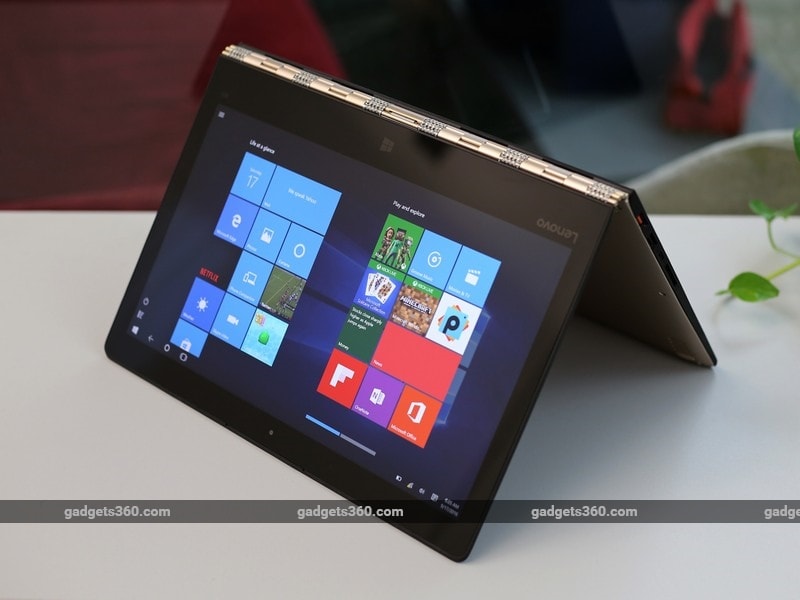 Verdict
The Lenovo Yoga 900 is priced at Rs. 1,23,690 which is not too bad. With this money, you get top-of-the-line Ultrabook specifications along with an excellent high-resolution display, a good keyboard, and decent battery life. Let’s not forget its ability to transform into a tablet too, if the occasion calls for it.

If we could change a few things, we would like an HDMI port built into the laptop. Lenovo could have at least thrown in some adapters for the Type-C port. We also hope the next version is lighter for better tablet usage.

Overall, the Yoga 900 is a very good hybrid laptop that balances portability and usability better than most other solutions in the market.

Further reading: Lenovo Yoga 900, Lenovo Yoga 900 review, Lenovo Yoga 900 specifications, Lenovo Yoga 900 price, Lenovo Yoga 900 price in India, Yoga 900, Hybrid laptops
Roydon Cerejo Email Roydon
Roydon Cerejo writes about smartphones and laptops for Gadgets 360, out of Mumbai. He is the Deputy Editor (Reviews) at Gadgets 360. He has frequently written about the smartphone and PC industry and also has an interest in photography. With over a decade of experience covering the consumer technology space, he is also an avid sci-fi movie and TV show geek and is always up for good horror flick. Roydon is available at roydon@gadgets360.com, so please send in your leads and tips. More
Samsung Galaxy J7 Prime India Launch Expected on Monday
At Tokyo Game Show 2016, Absent Nintendo Is Talk of the Town

product The Lenovo Yoga 900 is a very good hybrid laptop that balances portability and usability better than many other solutions in the market. 4.5 out of 5 stars