Lenovo’s ThinkPad laptops usually make for excellent workhorses for students or even professionals who prioritise productivity. The hallmark feature for us has always been the ergonomic ThinkPad keyboards which are hard to beat.

The ThinkPad 13 is a new model catering to students and professionals on a budget. It's built with durability in mind, and claims to be able to withstand humid environments and extreme temperatures. However, even though Kaby Lake refreshes have been announced already, this model still uses a Skylake-generation CPU.

Let’s see if the ThinkPad 13 offers a good enough value proposition to warrant a recommendation.

The 13.3-inch screen makes the ThinkPad 13 fairly compact and easy to carry around. It’s pretty lightweight too at roughly 1.4kg and has good weight distribution. The body is built from plastic but it doesn’t feel cheap. The matte finish on the lid provides a rubber-like feel, which helps keep pesky fingerprints at bay. There’s a ThinkPad logo on the lid and on the palm rest area, with an illuminated dot on the letter 'i'. The lid provides decent protection for the display as there’s little flex, and it doesn't warp easily when pressed from the back.

The dual-hinge mechanism offers good torsion, even when you flip the lid to its extreme which is about 170 degrees backwards. The 13.3-inch display on the Lenovo ThinkPad 13 features an anti-glare coating and a resolution of 1366x768, which is entry-level. There are slight visible jaggies around icons and text but it’s not that bad. Brightness is good enough for indoor use, but we needed to max it out when using this laptop outdoors. 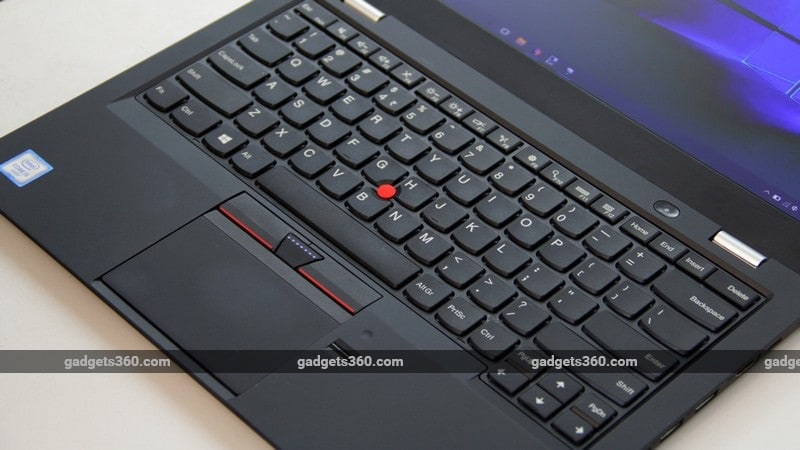 The one thing that ThinkPads usually get right is the keyboard, and the ThinkPad 13 is no exception. Despite its compact size, Lenovo has managed to fit in well-spaced keys which are the size of what you’d find on a standard desktop keyboard. Unfortunately, there’s no backlighting. You have the trademark TrackPoint input controller nestled between the G H and B keys, and the corresponding mouse and scroll buttons below the spacebar. The trackpad isn’t very wide but does a good job, and left- and right-clicks are recognised well. You also get a fingerprint sensor that’s placed next to the trackpad.

The ThinkPad 13 has a good set of ports spread out on both sides. You get three USB 3.0 ports, a USB Type-C port (USB 3.1 Gen1), a headphone and microphone combo socket, HDMI, an SD card reader, and a proprietary OneLink connector for connecting a ThinkPad OneLink dock. The exhaust vents are placed on the left, near where your hand will be, but we didn’t find the heat bothering us during our review period. There are vents on the bottom for for the intake of cool air, and the battery is non-removable.

The Lenovo ThinkPad 13 unit we received was configured with an Intel Core i5-6200U CPU, which is a dual-core model with Intel’s Hyper-Threading feature. There’s a single 8GB stick of DDR4 RAM and a 192GB M.2 SATA SSD. Other specification include a HD webcam, dual-band Wi-Fi 802.11ac, and Bluetooth 4.1. The ThinkPad 13 is not available online in India, and that's because it's currently being sold only to corporate customers. However, Lenovo tells us that new models with Kaby Lake CPUs will be available online in India by the end of January, and that there shouldn't be any major price difference. 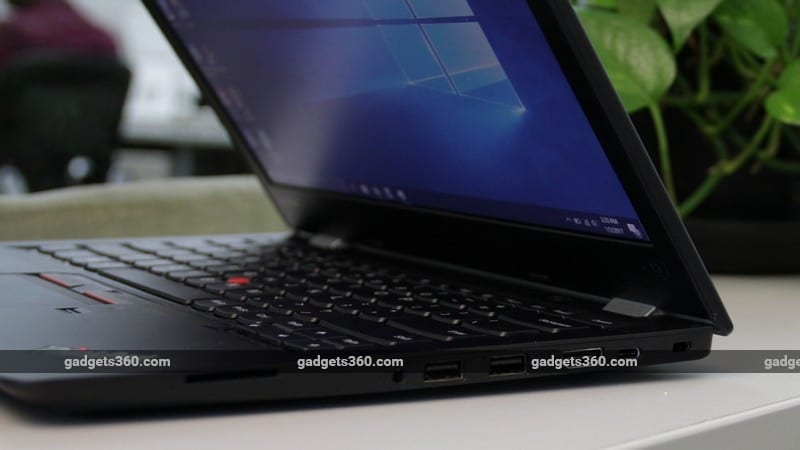 The version that we received has a discrete TPM (Trusted Platform Module) chip which is used to encrypt critical information. The BIOS also gets an anti-theft technology from Computrace. Our test unit came without a Windows installation but if you buy the retail model, you should expect Windows 10 with some preloaded software like Lenovo Companion, Lenovo Settings, REACHit and SHAREit. A trial version of McAfee LiveSafe should also be bundled.

We loaded up Windows 10 Pro and updated the drivers and software to get the ThinkPad 13 running. The SSD helps in shortening boot and application load times but the write speeds are a bit disappointing. In SiSoft Sandra’s file system benchmark, we got a sequential read bandwidth score of 459MB/s while the write bandwidth was a mere 143MB/s. Out of the 192GB of storage space, you actually get 172GB, and of this, around 15GB is taken up by the OS leaving you with about 150GB for programs and files. This is a decent amount of space for work or school needs, considering there’s always cloud storage. However, if you have a lot of media or large files then you’ll probably run out of space pretty soon. A 256GB SSD would have been preferable here.

The laptop returned decent scores in benchmarks, except for graphics-heavy tests. In PCMark 8, we got scores of 3255, 3756, and 3088 in the Home, Creative, and Work test suites respectively. 3DMark gave us just 715 points in the standard Fire Strike benchmark, which shows that the integrated Intel HD Graphics 520 GPU isn’t really designed with gaming in mind - then again, neither is the ThinkPad 13.

However, don’t rule out its multimedia capabilities just yet. The ThinkPad 13 can handle 4K video playback with ease, and sound is surprisingly good for a “business” laptop. There are two speaker slits on either side of the body, firing downwards, that manage to produce rich and wholesome sound. The volume level is very good, and mids and highs sound good. The HD webcam doesn’t produce a noisy picture indoors, although it is a bit hazy overall.

The built-in 3-cell, 42Whr battery lasted for 2 hours and 26 minutes in Battery Eater Pro, which is fairly normal. In real-world usage, we easily managed to go around 7 hours at a stretch. This means that even if you do forget your power adapter at home, you should be able to get through most of a work day without worrying.

Verdict
While you won't be able to pick this specific model up right now, we're told that refreshed ThinkPad 13s with Intel's Kaby Lake CPUs are only a few weeks from hitting our shores. You can expect the price range to be from Rs. 62,000 to Rs. 75,000, depending on the configuration you select. The best part is that the refreshed units will have backlit keyboards, something we sorely missed here. There should be variants with touchscreens too, so it's definitely worth waiting a little while.

ThinkPads have always commanded a premium compared to regular laptops, and for the most part, it's worth it if your work involves a lot of typing or you need something durable that can withstand the jostles of a daily commute. However, the ThinkPad 13 that we reviewed today feels a bit underwhelming, especially because of its premium price. The body, while sturdy, could have used some metal reinforcements. A backlit keyboard, a higher resolution display and a larger SSD would have helped make things more balanced.

That said, even in its current avatar, the ThinkPad 13 does make for a decent alternative to the Apple MacBook Air. Sure, it isn't as thin or stylish as Apple's current low-end offering, but if you're looking purely at productivity, it has similar specifications and has a better selection of ports at roughly the same price.

product The Lenovo ThinkPad 13 makes for a good workhorse laptop thanks to its compact body, excellent keyboard and very good battery life. 4 out of 5 stars