If you're in a creative profession, there's a good chance that you'll see LaCie's bulky orange hard drives everywhere around you. The brand has become heavily associated with filmmakers, photographers, and other kinds of other content creators. For everyone else, the size, colour, and especially the price might come as a surprise.

LaCie hard drives have always been expensive, but they've earned a loyal following. That's not only because of their eye-catching designs, but also thanks to a reputation for reliability, speed, and ruggedness. The brand was once independent, but is now owned by Seagate, which means that there's not a whole lot on the hardware level that differentiates LaCie drives from ordinary consumer ones.

The LaCie Rugged Secure is a portable hard drive that claims to be fast and safe, both in terms of physical resilience and data security, but costs an eye-watering Rs. 16,499 for 2TB. Let's see if it lives up to the LaCie name. 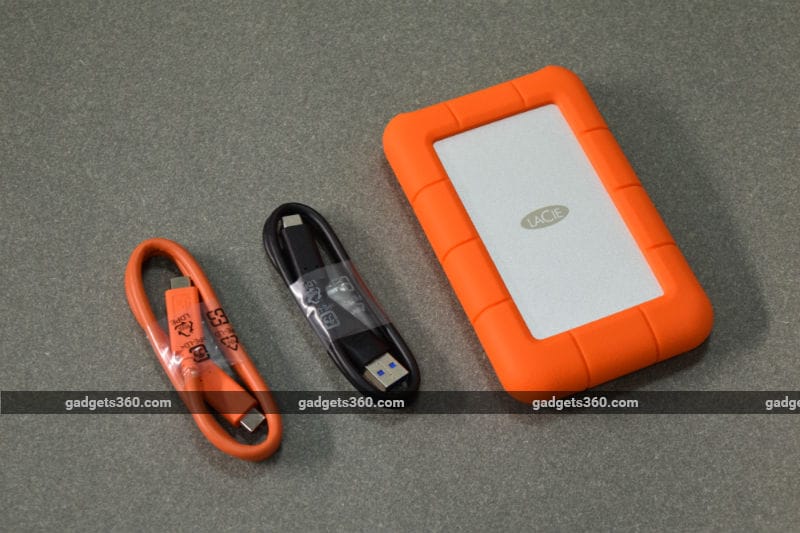 The puffy orange rubber casing of the LaCie Rugged line is instantly recognisable. This look has been around since 2006, and it's credited to award-winning designer Neil Poulton, whose name you'll find emblazoned across the back of each drive. There's nothing subtle or sleek about this product's appearance. Like it or not, the contrast of plain flat metal in the centre and bright orange rubber around the sides is very eye-catching.

The rubber is just a sleeve that slips on and off quite easily. The drive on its own is a stark, minimalist block. Oddly, the USB Type-C port at the rear is completely exposed. This means that the drive does not qualify for an IPxx rating for water and dust ingress, but there are some other LaCie Rugged variants with rubber port covers and integrated cables for this very reason. LaCie only promises "rain resistance" which means that light splashes are okay - hardly the level of reassurance we were hoping for.

The spec sheet claims 1.2m "drop resistance" and enough "crush resistance" to survive being run over by a 1-ton car - aesthetic damage is not counted, but LaCie promises that the drive will remain functional after such treatment. It's also supposed to be able to survive sub-zero temperatures. If shock protection is what you're after, other drives such (and some third-party cases) make similar or even better promises. The Adata HD700, for example, boasts of IP56 and MIL-STD-810G 516.6 ratings for weather and shock protection respectively - even though the latter isn't a formal standard, it's more reassuring than LaCie's vague claim of this drive being reliable because it's "the industry's most trusted way to capture and transport data in the field". 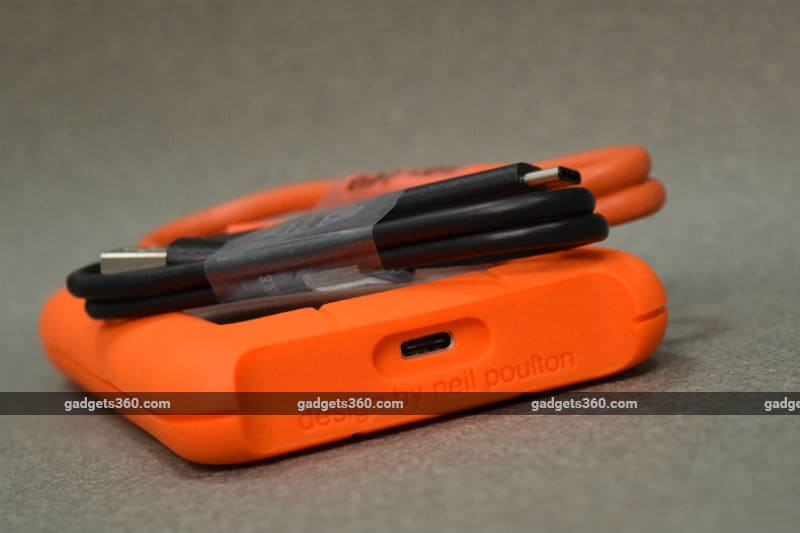 There is a confusing range of eight current LaCie Rugged models, using various old and new connection standards. Some are wildly different, while others are set apart by only very minor features. Some have multiple drives in RAID, some have integrated SD card readers, and some are IPxx rated. This particular model has a single USB Type-C port, and offers 256-bit AES hardware encryption. Its' a 2TB drive and there are no capacity options. You'll need to be careful when shopping, because the LaCie Rugged name covers such a wide variety of drives. Several older models are also still available in the market.

This is one of very few hard drives to use the USB Type-C connector. It's interesting that LaCie claims "USB and Thunderbolt 3 compatibility" prominently on the box, because every single USB Type-C device is technically compatible with a Thunderbolt 3 host port. It might lead buyers to think that this drive is exceptionally fast, but spinning hard drives aren't even capable of handling data at the 40Gbps peak speed that Thunderbolt 3 can support. This is a plain and simple 5Gbps USB 3.0 external hard drive.

Also in the box are a number of pamphlets. One has instructions for redeeming one free month of the Adobe Creative Cloud All Apps plan, worth Rs. 3,382. Another has the secure code and reset code for the drive's encryption, which you should store very safely. The last one deals with Seagate's Rescue data recovery service. You get a two-year plan worth $15 (approximately Rs. 1,012) with this drive, and the company claims a 90 percent success rate for recovering data lost in all kinds of ways. Should software recovery fail, you can send your drive in to Seagate's lab once during the subscription period. You can also extend the subscription at reduced rates.

This drive has a warranty of two years. It's formatted to exFAT by default, and the formatted capacity is 1.86TB. You'll be able to use it just like any other drive the moment you plug it in, but you'll need LaCie's software in order to set up encryption. It looks like there's an installation file on the drive itself, but this is only a link to download the latest version of the app from LaCie's website. 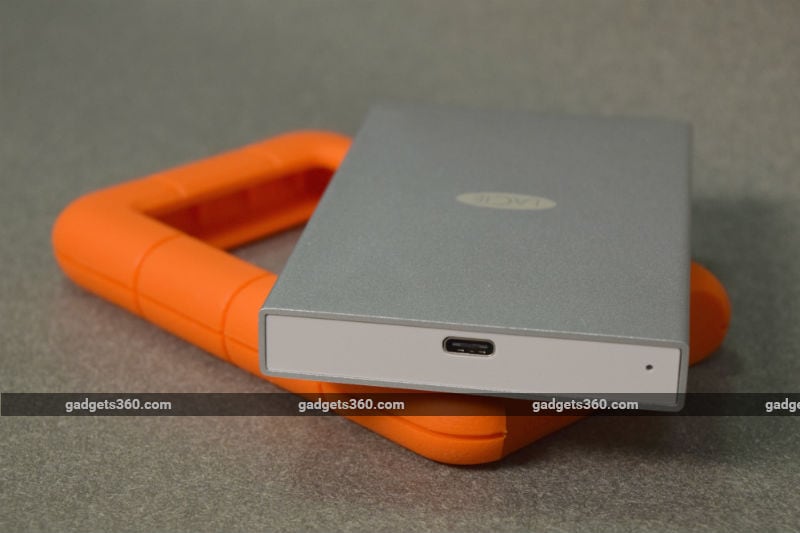 Much like with WD's latest My Passport drives, the utility that you have to install wants to run all the time, and is unnecessarily confusing. On our Windows 10 test bench, we were prompted to reformat the drive to NTFS for "better performance", but exFAT is the more modern file system and is the better choice if you use Windows as well as macOS regularly. We were also presented with options to set up folder mirroring as well as a file backup routine, and the difference between these two things was never explained.

The step-by-step process for enabling encryption is quite well implemented though. There are adequate warnings about how there is no way to recover data if you lose your password. With this done, the Rugged Secure will only mount itself after authentication. If you plug it into another PC or Mac without the LaCie software installed, you'll see only a 4MB partition with a little authentication utility. On macOS, you'll also need to install specific drivers.

We tested the LaCie Rugged Secure using its own USB Type-C to Type-C cable, connected to the USB 3.1 Gen 2 port on our test bench's MSI X370 Xpower Gaming Platinum motherboard. The rest of the specifications include an AMD Ryzen 7 1800X CPU, 2x8GB of Corsair Vengeance LPX DDR4-3000 RAM, and a Samsung SSD 860 Evo boot drive.

We measured read and write speeds using SiSoft SANDRA and measured sequential reads and writes at 111.85MBps and 116.58MBps respectively. Random reads and writes, which are much more indicative of real-world usage, came in at 87.13MBps and 92.90MBps respectively. We ran the tests with encryption enabled as well, and got pretty much identical numbers, showing that the added security doesn't come at the cost of latency. This level of performance is on par with other USB 3.0 hard drives we've tested, and is pretty much as good as it gets for current hard drive technology.

The mirroring and backup functions of the software were easy to set up. The backup process supports basic scheduling, and the mirror function works both ways. Mac users don't get the backup function, and Seagate recommends using macOS's Time Machine feature instead.

There's a Crypto-Erase function which claims to irretrievably delete all data on the drive, or you can reset the drive to its factory state which also disables encryption. In order to do this, you'll need the 32-character reset code on one of the bits of paper that came in the box. It's disappointing that the LaCie software doesn't have any diagnostics and doesn't even show basic indications of the drive's health. 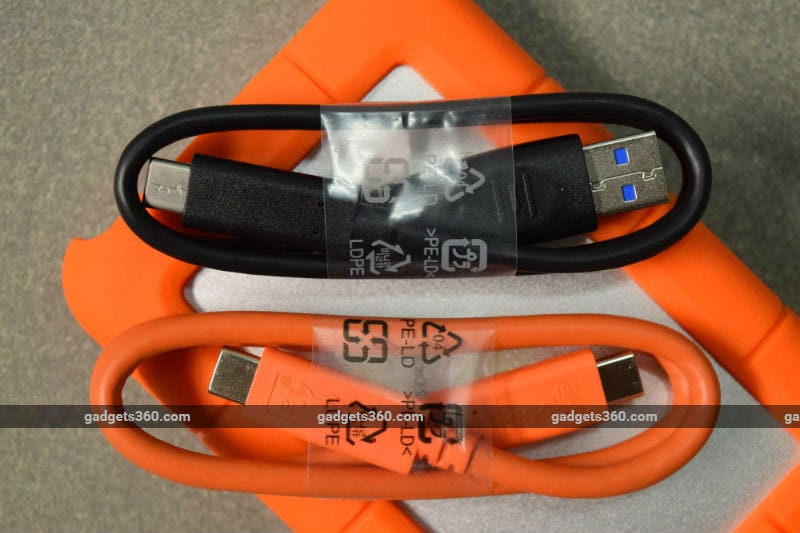 Verdict
The primary appeal of LaCie's Rugged drives is their reliability, but it's hard to evaluate that in the small amount of time that we have for a normal review. In terms of everyday performance, there's very little that's special about this particular drive - it's aimed at prosumers but offers nothing that ordinary consumer drives don't have. WD's latest My Passport models offer 256-bit hardware AES encryption, and Adata's HD700 has superior credentials when it comes to shock protection.

LaCie used to be well known for its fast Thunderbolt drives which were uncommon, and particularly appealing to Mac users, but the Rugged Secure is a standard USB 3.0 drive with no speed advantages. It seems like the main thing that sets this drive apart from others is its design - and that too only in terms of aesthetics, not function.

It seems absurd to pay Rs. 16,499 for this drive when standard 2TB hard drives can be purchased for well under Rs. 6,000. Many users would be happy to save so much money. We can't back up LaCie's claims of reliability, but for those whose livelihoods depend on it, the Rugged Secure might provide some extra peace of mind, and you can't really put a price on that.

product The bright orange LaCie Rugged Secure is designed for professionals who work in harsh environments and need reliability as well as data security.
Comments