Have we reached peak RGB? Now that our motherboards, graphics cards, mice, keyboards, headsets, mousepads, case fans and RAM sticks are all bedecked with pulsing, flashing LEDs, we should honestly have enough. For better or worse, not every company thinks so, and that's how we have in our hands an actual RGB LED SSD. That's right, one of the least visible components in your PC can now join in on all the fun.

Most PC cabinets don't put 2.5-inch SSDs on display — they're usually enclosed in metal cages or screwed onto the back of the motherboard baseplate where their wires won't get in the way of a nice view. Still, there are people who will buy an RGB LED SSD just for the novelty value, no matter what its performance is like. We're hoping that the HyperX Fury RGB SSD from Kingston that we're reviewing today isn't just about looks, but also delivers on performance. 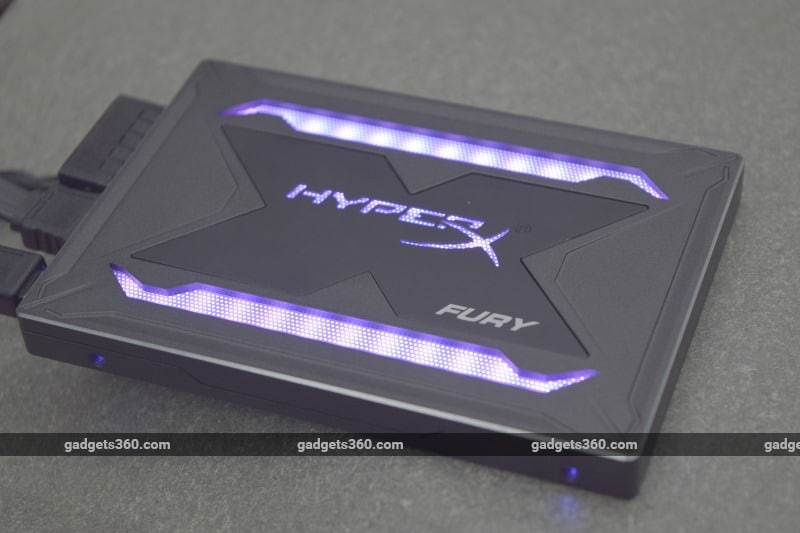 Most SATA SSDs today are designed to be as inexpensive as possible, and don't really need sturdy bodies since there are no moving parts and they're safely mounted within your PC case at all times. The popular Samsung SSD 860 Evo, for instance, has just a thin metal shell and weighs 50-60g. The HyperX Fury RGB by contrast has a thick, chunky body and weighs 165g which is immediately noticeable. It feels heavy and solid.

It's also 9.5mm thick, as opposed to the 7mm or less that has become more or less standard for today's SATA SSDs. You won't have much trouble in most desktop PC cabinets because 2.5-inch hard drives are usually this thick, but you might have trouble in very small-form-factor situations. This SSD also won't fit into some laptops with 2.5-inch SATA bays. It isn't meant to be hidden away inside a laptop of course, but this is worth keeping in mind.

There are two RGB LED strips across the top of the SSD with an illuminated HyperX logo between them. A pattern of tiny dots is formed by a fine grille covering the strips and logo. If you look closely, you'll see that the lighting isn't very even, and you can make out the evenly spaced LEDs.

These three elements are not individually addressable; you only have a single zone to control. That means you can fade from one colour into another, but you can't have multi-colour effects and the strips themselves aren't animated. There's a Micro-USB port next to the standard SATA power and data ports, and using an included proprietary cable, you plug the SSD directly into a four-pin 12V RGB motherboard header (or a five-pin WRGB header, being careful to avoid the fifth pin).

The cable is interesting because it has a splitter that lets you plug another RGB component into the same motherboard header. Keep in mind that this will add a little extra clutter to the inside of your PC case — and if you're buying RGB LED components, chances are you care about aesthetics. If you choose not to use the included lighting cable, or don't have a motherboard with an RGB LED controller, the HyperX Fury RGB will light up in red and stay that way using SATA power alone. The only way to disable the LEDs is to set everything up and choose “Off” in the software.

To set your colours and effects, you'll have to use your motherboard's lighting control software (or any other hardware that can host RGB LEDs, such as a dedicated lighting hub). You have to know which zone or header it's plugged into. This is good, because it means that the SSD will by synced to your other components and you don't have to worry about multiple manufacturers' clashing implementations. It also means that the effects, triggers, and sequences that you can have depend entirely on a third party. 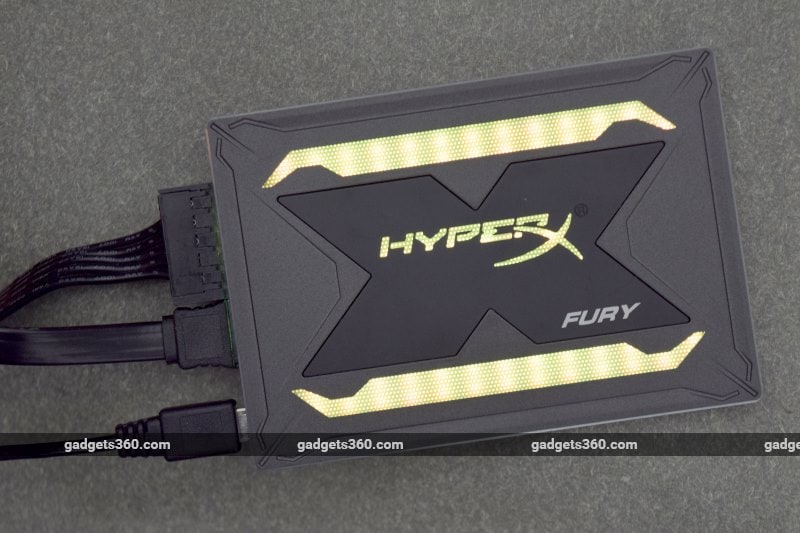 Coming to the primary purpose of this SSD, you have a choice of 240GB, 480GB, and 960GB models. Kingston has used 3D TLC NAND flash, which is now the norm. The controller is the widely used though somewhat dated Marvell 88SS1074. The sequential read speed is rated at up to 550MBps which is near the limit of what the SATA standard itself can handle, but the rated sequential write speed is lower than expected at up to 480MBps. Kingston has not specified whether these figures apply to all capacity versions or whether they are the best case values for the product family as a whole.

Endurance in terms of total bytes written (TBW) is 120TB for the 240GB model; 240TB for the 480GB model; and 480TB for the 960GB model. These values are the amounts of data you should be able to write to your drive before it shows any sign of failure. The warranty period is three years, whereas other manufacturers typically offer five-year warranties.

Kingston says the HyperX Fury RGB's power consumption is just 0.2W at idle, and 2.5W at most in use. It isn't clear whether these figures account for the RGB LEDs, because they're in line with most normal SATA SSDs.

We reviewed the 240GB version of the HyperX Fury RGB SSD. Other than the drive itself, you get the RBG LED cable, a HyperX logo sticker, an illustrated connection guide, and a coupon with a code for Acronis True Image HD. As with our experience when reviewing the Kingston KC1000 PCIe SSD, this is an OEM distribution that doesn't have all the features of the retail software, but it's still useful and a good value-add. 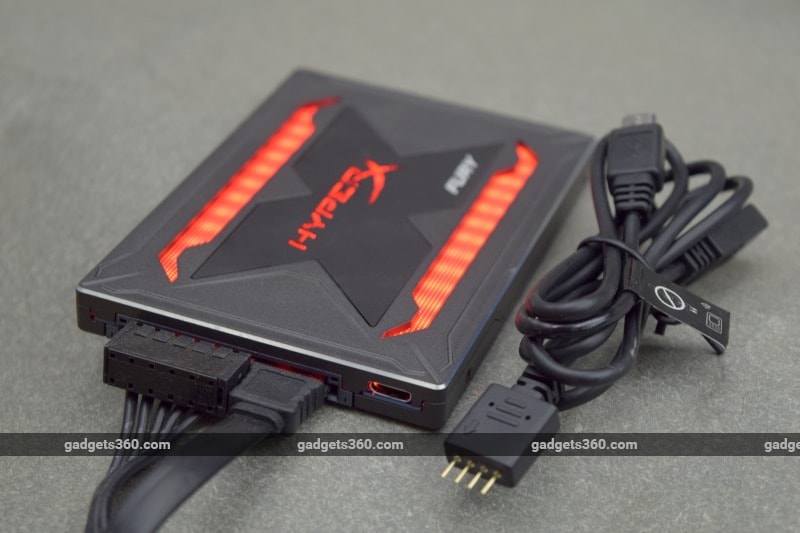 Our 240GB HyperX Fury RGB review unit reported 223.57GB of usable space after being formatted for the first time. Our first benchmark is CrystalDiskMark 6. We measured sequential reads at 563.6MBps and in a pleasant surprise, the sequential write speed turned out to be 525.9MBps. Random reads and writes at a queue depth of 8 were 304.7MBps and 322.9MBps respectively.

Next up, we used the Anvil benchmark which runs mutltiple tests factoring in throughput and access time using sequential as well as random data. We got read and write scores of 1,658.31 and 2,284.92 points respectively, with an overall score of 3,943.24 points.

The HyperX Fury RGB proved to be slower than the workhorse Samsung SSD 860 Evo, which is a very popular choice because of its performance and price, and of course Samsung's long and positive reputation in the SSD market. Samsung also offers a five-year warranty, hardware encryption, and very useful diagnostic software.

We used the Gigabyte RGBFusion utility for our motherboard and were able to control the colour and pattern of the HyperX Fury RGB's lighting fairly easily. Gigabyte's software isn't as refined as some other manufacturers' implementations. We couldn't select the SSD itself; we had to know which motherboard header it was plugged into.

Colours on screen did not always perfectly match what the SSD produced, but we usually got close enough to what we wanted. It's hard to say whether this is an issue with the LEDs or the desktop software.

We also found that the HyperX Fury RGB got hot enough that it was impossible to touch for more than a second. This will a big concern in cramped PC cases. It also remains to be seen whether this will affect the SSD's NAND flash and controller chips.

Verdict
Kingston's HyperX Fury RGB SSD somewhat prioritises form over function. It's expensive and doesn't perform as well as ordinary SATA SSDs, and we have plenty of options in the market. You wouldn't buy this SSD to upgrade an older laptop or desktop. It only makes sense for a very niche audience of enthusiasts who have windowed PC cases. Unfortunately, while enthusiasts don't mind RGB LEDs on top of hardware that works well, they rarely want to trade performance for looks.

Priced at Rs. 5,450, the 240GB HyperX Fury RGB SSD is considerably more expensive than better-performing mainstream SATA models, and entry-level options cost less than half as much. It seems that this drive is aimed exclusively at those who prioritise looks over everything else.

PS4-Exclusive Driveclub Online Servers to Shut on March 31, 2020
Facebook Working on Tab to Promote 'High Quality News'
product You might already have a motherboard, graphics card, RAM, and case fans that light up, and now Kingston's HyperX division is hoping that you want to add an RGB LED SSD to the mix 3.5 out of 5 stars