When the USB standard was first devised, the world was largely PC-centric, and the people responsible for standards and compatibility only imagined PCs as "hosts", and everything else as "targets", which would be controlled by a host. Plugs were shaped differently to make sure people didn't plug hosts into hosts and targets into targets, and for a while, people used their printers, hard drives, and various peripherals without any trouble.

In the years since then, things have become more complicated. Millions of USB devices have been sold, many of which work both ways. Phones and tablets can be plugged into PCs for transferring data, but they can also control peripherals of their own. Android-based smartphones and tablets have been able to address USB storage devices for a while now, thanks to an often-overlooked feature called USB On The Go. Since there's no space for a USB Type A host port (the common rectangular socket), the existing USB Type B target port must play a double role. Typical USB-OTG adapters have a Micro-USB plug on one end and a full size Type A socket on the other, allowing various devices to be plugged into them.

Not all devices support USB-OTG, and not all come with such adapters, so the feature has somewhat flown under the radar. If you ever wanted to use USB-OTG, you'd have to remember the adapter and let it dangle from your device. We'll soon have a common USB plug standard for all devices, eliminating the old host-target relationship, but until then, USB-OTG is going to remain inconvenient.

There is, however, an alternative. Manufacturers have been showing off pen drives with the "wrong" type of USB plug, which can be plugged directly into a device's Micro-USB port. Some of these even have both types of plug, so you can use them on PCs as well as portable devices. 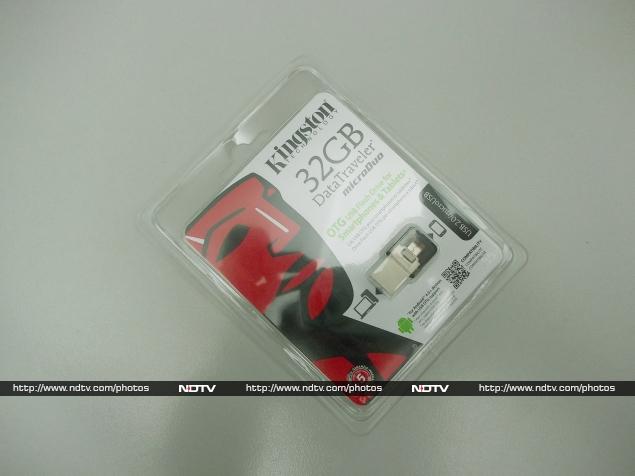 Look and feel
Kingston's microDuo is exactly that. It lets you fill it up by plugging it into a PC like any other drive, and then access its contents on a smartphone or tablet. Kingston has published a list of devices on its website, and it is rather bare, so hopefully it will expand over time. The drive is thankfully quite tiny, so it won't stick out too much when plugged into a portable device.

The DataTraveler microDuo is available in 8, 16 and 32GB capacities, with a 64GB variant coming soon. We have a 32GB unit in for review today, and it does look rather attractive, with a champagne gold body and brown plastic cover. The microDuo is well crafted, and doesn't feel like the cheap throwaway USB drives that have become common today.

The plastic shroud covers the Micro-USB plug, while the full sized one is left exposed. It swivels a little over 90 degrees, which means it will stick out sideways when the drive is plugged into a Micro-USB port. You can pop the plastic off altogether, if you like.

There's also a little loop on the metal body for attaching a lanyard. Kingston includes a flimsy-looking thread loop with the microDuo, which most buyers will probably end up ignoring.

As far as pen drive size goes, the microDuo is quite tiny, which means it's unobtrusive when plugged into most devices, but also that it would be pretty easy to lose. 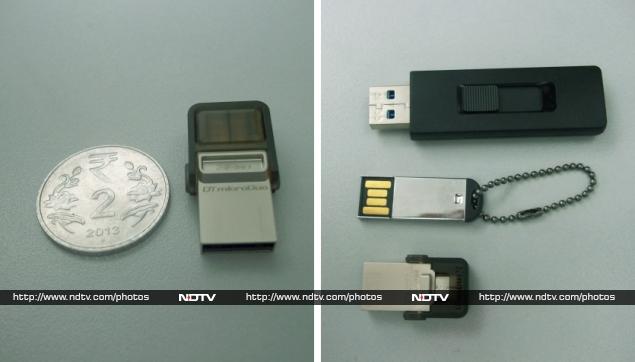 Performance
Using the microDuo is as easy as plugging it in. Different phones react differently to OTG devices, so while some might pop up helpful dialogs offering to play music or videos, others will require you to have a file manager app. In most cases, the drive shows up just like a microSD card would, and there's no difference in how you can copy files to and from it, save content, and play media.

We tested the Kingston DataTraveler microDuo using both its interfaces, using a Windows 8 laptop for the regular USB interface and a Windows 8 tablet with a native Micro-USB interface. We also tried it on a handful of Android smartphones.

We had absolutely no trouble on the Windows machines. The total formatted capacity of our 32GB test unit was reported as 29.2GB. Speeds were just about average by USB 2.0 standards, when we tried copying multiple files of various sizes to and from the microDuo. We also ran SiSoft SANDRA 2014 to get some hard numbers, and found that speeds were very slightly lower when used via Micro-USB, though that could also be attributed to differences between the two test devices.

SANDRA's drive index score was 27.86MBps over USB, and 27.0 over Micro-USB. Sequential read speeds scaled equally, with 25.2 and 22MBps over USB and Micro-USB respectively, while random read speeds were nearly the same, at 25 and 22.12MBps respectively. There was a larger gulf between the two when it came to write speeds, though, with sequential speeds clearly faster than random. 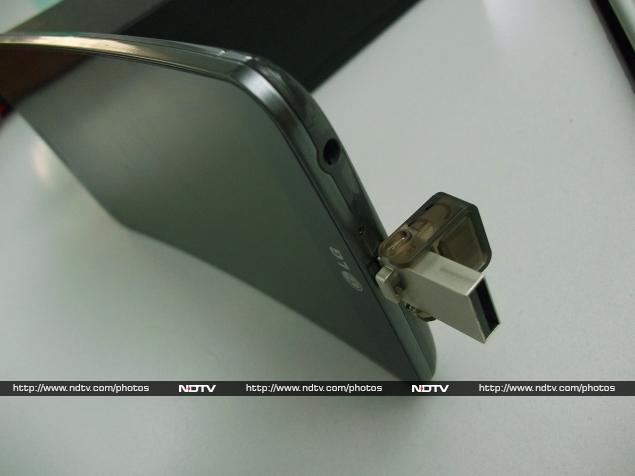 Verdict
The Kingston DataTraveler microDuo is a fantastically handy little device, especially in this day and age where data tends to get fragmented across devices. If your phone or tablet is running out of space and doesn't have a microSD slot, a USB-OTG drive could be a lifesaver. It might stick out of your device awkwardly, but it's definitely better than nothing.

We expect to see many more such drives on the market soon, in interesting shapes and sizes that work well with smartphones and tablets. At street prices of around Rs. 850 for 16GB and Rs. 1,500 for 32GB, there's definitely a price premium over standard pen drives, but the versatility is well worth the cost.

product This two-in-one USB pen drive can be plugged into PCs as well as tablets and smartphones which support USB-OTG, so you can transfer files easily and expand your devices' storage capacity