USB pen drives come in all shapes and sizes, but there's very little else differentiating them. Some might promise high capacities or rugged bodies, and others might have multiple connectors to work with PCs as well as smartphones. Very few actually offer any features that others don't. Kingston has identified at least one niche market that everyday commodity pen drives aren't good enough for - high-security data storage and transportation.

If you deal with sensitive information all the time and cannot risk having a portable storage device lost or stolen, encryption is your best bet. Kingston's DataTraveler 2000 is one of several models that Kingston sells featuring hardware encryption, but the only one with its own physical keypad that makes it completely independent of host systems. One look at it and it will be clear that this isn't your ordinary USB drive, but do you really need one of these? We'll help you decide. 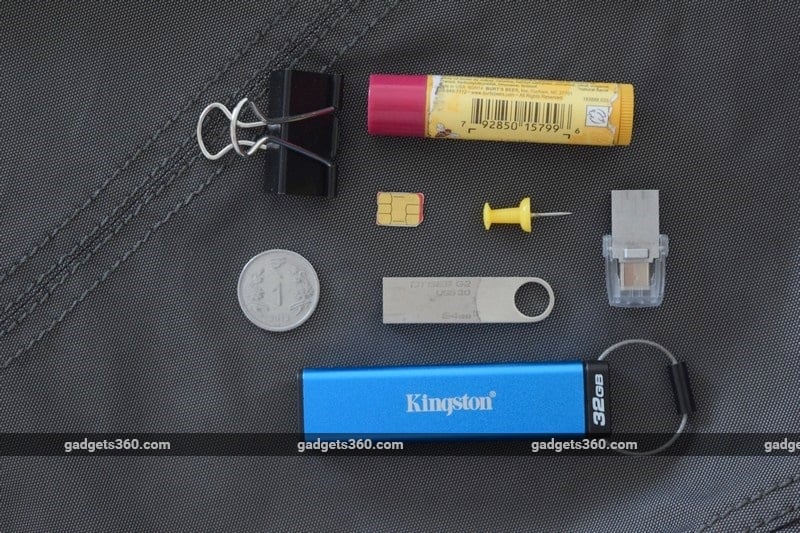 If the electric blue colouring and the buttons on the front of the DataTraveler 2000 don't grab your attention, its sheer size will. It's enormous by pen drive standards, measuring 8cm long and 2cm wide. Thankfully, the body is long and narrow, so it shouldn't block neighbouring ports on most PCs. You get the drive itself and a removable metal cap that covers the entire body, not just the USB connector. There's a rubber flange that is presumably intended to keep liquids from damaging the device's electronics. It's rated IP57 for water and dust resistance, though surprisingly Kingston doesn't state this anywhere on the packaging.

Both the cap and the drive itself are metal, though the drive has a rubbery finish which feels like it will eventually peel off. Getting the cap off is a bit of a struggle as the seal is really tight. You have to hook a finger into the metal ring at the end of the drive, so we'd advise against taking that off. We usually don't like removable caps because they're too easy to lose, but this one shouldn't be a problem given its size and eye-catching colour.

On the front of the drive is the keypad, with ten alphanumeric keys and another with a key icon. The buttons are pretty tiny but they're well spaced and require firm presses so there's little chance of making mistakes. There are red and green LEDs with lock and unlock icons at the top of the keypad, and another unmarked blue one at the bottom. 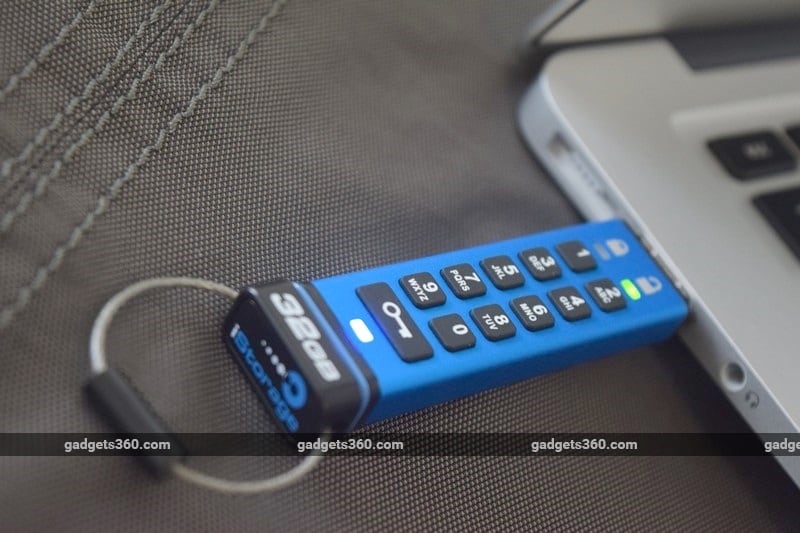 There's a lithium polymer battery inside the DataTraveler 2000 and Kingston advises buyers to plug the drive in to a USB port for at least an hour before beginning to use it to allow the battery to charge. This is because the drive is essentially a tiny self-contained computer with its own microprocessor, and you use the keypad to unlock and manage it without it even being plugged in. Kingston doesn't specify how long the 40mAh battery will stay charged, but it should top itself up whenever the drive is plugged in to a PC. If it does die out, you'll need to plug it in again before you can unlock it, but your data won't be affected.

The pictographic guide on the back of the bubble pack isn't very clear, and the manual is included only as a soft copy on the drive itself, so it's easy to miss the battery charging step. It also isn't clear at all what the flashing LEDs are supposed to mean until you read the manual (and even then, it would be a pain to memorise every notification sequence). We wound up checking Kingston's website for more helpful instructions and wound up just downloading a copy of the manual from there.

To use the DataTraveler 2000, you have to press the Key button, then type in your passcode, and then press the Key button again. The red LED will flash during this process, and then a second or two after you're done pressing buttons, the the green one will light up and stay solid. At that point, you have 30 seconds to plug the drive in to your PC, and it will then work like any ordinary storage device. The moment you pull it out of a USB port, or if you hold down the Key button for three seconds, it will arm itself again.

The default passcode is 11223344, and this is printed both in the manual and on the back of the DataTraveler 2000's retail package. It's obviously common to all units sold and should be changed immediately, or you're defeating the purpose of buying one. This requires a dip into the user manual, because all administration is done on the device itself, using the buttons for input and LEDs to decipher what's happening. Passcodes have to be between 7 and 11 characters long.

Apart from changing the passcode, you can switch between read-only and read-write modes, set a timeout lock to further increase security, and reset the encryption key (which will wipe out all data). The DataTraveler 2000 will reset itself after ten unsuccessful passcode guesses, to prevent against brute force attacks.

One big apparent shortcoming is that there is no way to remotely track, wipe out, or manage access to a DataTraveler 2000 drive. It's also not something that can be deployed across a workforce because it's unreasonable to expect occasional, non-technical users to learn the series of button presses needed to do things like wipe the drive or change its passcode. The human using it is the biggest potential point of failure in terms of security. 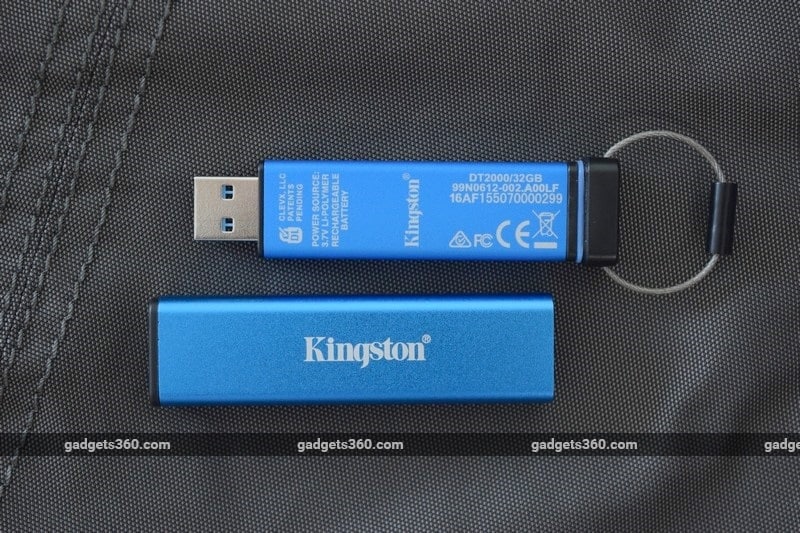 This is a USB 3.1 (Gen 1) drive and is available only in 16GB, 32GB, and 64GB capacities. It uses 256-bit AES encryption. Because all encryption is handled on the device itself, there is no need for any driver or software utility, and there is no barrier to operating system compatibility. You also don't have to set up a separate encrypted partition like you do with some password-protected USB devices.

If you're running Windows Vista SP2, macOS 10.8, or any Linux distribution with kernel 2.6 or later, the DataTraveler 2000 will work. It should also work on Android and ChromeOS devices that support USB mass storage. We had no trouble using the drive on multiple Windows 10 PCs and a MacBook Air running macOS Sierra.

When you disarm the drive using your passcode, it appears to your host system like any other USB storage device. The encryption is totally transparent. You are thereby protected from keyloggers and brute force decryption attempts on a compromised host PC. The tradeoff for this is that if you ever forget the passcode, there's no way to recover it through software since your PC won't even detect anything plugged in. The only thing you'll be able to do is reset the drive and start from scratch.

We measured performance using CrystalDiskMark on Windows 10. The peak sequential read and write speeds were 154.4MBps and 92.07MBps respectively, while random read and write speeds were a much lower 7.64MBps and 5.29MBps. This huge variance shows that the DataTraveler 2000 won't be very fast when it comes to real-world usage. Considering the price you're paying, a USB SSD would deliver substantially better results and nearly ten times as much capacity.

Verdict
Who is the DataTraveler 2000 really for? It's insanely expensive, and seems to be total overkill for casual users, even those concerned about leaving sensitive information lying around. Software encryption should be good enough for most people.

Considering the laundry list of American and European data security standards and laws that Kingston cites on its website, it's obvious that this product is meant for those in high-security government positions, or those who deal with law enforcement, intellectual property, research data, or medical records. Stringent laws apply in many fields, and instances of extremely sensitive data leaks pop up in the news alarmingly often. Given the number of high-profile breaches to online services recorded each year, some might prefer to move their files offline. Kingston wants to protect people against the kind of liability that could ruin a business, and for some, the cost of these drives will be far less than the potential cost of not having them.

product The Kingston DataTraveler 2000 is meant for a tiny niche for whom no price is too high for data security.
Comments