Intel was one of the earliest companies to produce and sell SSDs, fully capitalising on its semiconductor design and manufacturing abilities. Intel SSDs have usually been well regarded, but the brand has taken a backseat to Samsung and others in the consumer market in recent times. The emphasis has also been on Intel's growing Optane portfolio, which use a different kind of flash memory called 3D Xpoint to blur the lines between memory and storage.

Intel doesn't have a very wide consumer SSD portfolio right now, but the SSD 760p sits right in the middle of it, between the enthusiast-class Optane SSD 800p and 900p series, and the entry-level SATA-based SSD 540 series. It's aimed at people who need performance as well as reliability. Let's see how it stacks up against its biggest competition. The SSD 760p is only available in the M.2 form factor, which has been adopted throughout the industry quite rapidly. Pretty much all new desktop motherboards and many laptops now use (or at least support) this compact modular standard. This is a PCIe x4 NVMe SSD, which means that it's potentially much faster than SATA SSDs.

Intel has gone with a controller made by Silicon Motion, but still manufactures its own flash memory chips. The ones used here are of the TLC (triple-level cell) variety, which means that three bits of data are stored per flash cell. Each chip has 64 layers of flash cells, commonly referred to as 3D flash. This increased density helps reduce costs, and is widely used across consumer-class SSDs today. It's worth underscoring that this is not one of Intel's Optane SSDs, because it is being mistakenly marketed as such by some retailers online.

A fact about SSDs that isn't very commonly known is that performance isn't always the same for different capacity versions of the same model. That's because when fewer physical flash chips are used on lower-capacity models, fewer operations can be performed in parallel and the full bandwidth of the controller might not be harnessed. That's also the case with the Intel SSD 760p - the 128GB model is rated for sequential reads and writes at up to 1640MBps and 650MBps respectively, while the 512GB version that we're reviewing today is rated for 3230MBps and 1625MBps respectively. That's a massive difference, so keep in mind that our test scores and ratings apply only to this specific version.

Capacity options range from 128GB to 2TB. One interesting detail is that active and standby power consumption are just 50mW and 25mW respectively. That's a significant improvement over the 100mW and 40mW figures claimed for this model's predecessor, the Intel SSD 600p. While not often considered a big deal, this will be important in the growing market for laptop SSD upgrades.

Endurance in terms of terabytes written (TBW) over the lifetime of the drive is also proportionate to capacity. The range spans from 72TBW to 576TBW, with the 512GB version coming in at 288 TBW. All capacity models have a 5-year warranty.

Unlike WD and Kingston, Intel doesn't offer any diagnostic or data migration software. The retail package is also completely bare, with nothing but the M.2 module itself and some warranty and regulatory documentation. 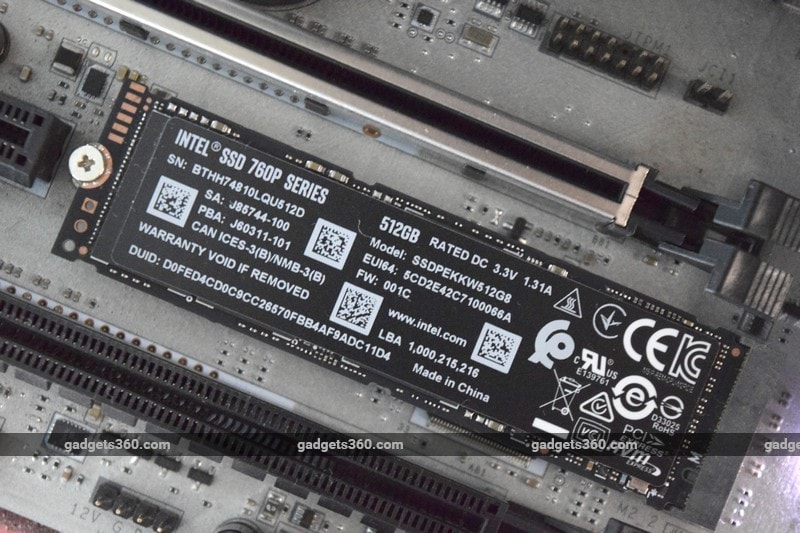 Installation shouldn't be a problem at all, but that will depend on the layout of your PC's motherboard. This is a naked SSD with no heatsink of its own. It has components on only one side which is good for laptops and low-profile slots. We were up and running with our review unit in less than a minute.

Our test bench consists of an AMD Ryzen 7 1800X CPU, MSI X370 Xpower Gaming Titanium Motherboard, 16GB of Corsair LPX DDR4-3000 RAM, and a Samsung SSD 860 Evo as the boot drive. We were running Windows 10 with all the most recent updates at the time our tests were run.

Windows showed the formatted capacity of our 512GB review unit as 476.81GB. We used CrystalDiskMark 6.0 to measure sequential reads and writes, and got 1589.6MBps and 1463.6MBps respectively. That sequential read speed is well below Intel's claim, and the write speed is also slightly lower. The SSD 760p trades blows with the WD Black PCIe and comes close to matching the Corsair Neutron NX500 in terms of write performance, but is left behind when it comes to read performance. These tests used a queue depth of 32, which saturates the controller for best-case performance but doesn't necessarily reflect real-world usage.

Random 4KB reads and writes came in at 382MBps and 341.1MBps respectively, which is much more like the performance of SATA SSDs than PCIe ones. Performance trailed most of the high-end PCIe SSDs we've tested in the past, and matched the entry-level Adata Gammix S10. 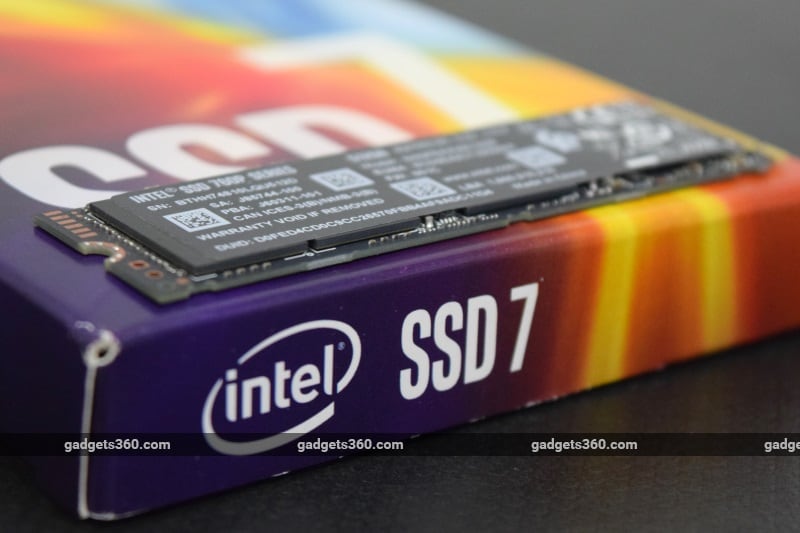 Verdict
The Intel SSD 760p has all the convenience of an M.2 PCIe SSD but comes in at a price that's slightly lower than expected, and the tradeoff for that is average performance in day-to-day usage scenarios. There's potential to be tapped if you copy large amounts of data to or from it regularly, which is why it wins over a product such as the Adata Gammix S10 even though it costs slightly more.

Users upgrading from a spinning hard drive will undoubtedly be happy with the level of performance on offer. The Intel SSD 760p seems like a reasonable choice for its asking price, but it isn't very exciting. If you're buying a PCIe SSD in order to get the best possible speeds, then you're going to have to look at higher-priced models such as the Samsung SSD 960 Pro and Evo, or the enthusiast-class Corsair Neutron NX500.

Still, there's another angle to consider here - power efficiency. This is easily overlooked when comparing specifications and benchmark scores, but it could be what swings a decision for laptop users.

Vodafone Red Postpaid Plans Now Offer Up to 300GB of Data in Bid to Rival Jio
Twitter Users More Logical in the Morning, Emotional in the Evening: Study

product Intel's new M.2 PCIe SSD has a relatively low price, but does that mean there are compromises in performance? Read our review to find out. 3.5 out of 5 stars