Any time you go out shopping with a tight budget, you have to deal with compromises. With laptops, you can't get very high performance, but at the very least you need a functional device with a keyboard and trackpad that are comfortable to work with, enough ports for basic connectivity, and a body that won't fall apart with normal use. We've seen some awkward designs, trying to cut corners everywhere in order to reach low price points, and the problem is that you're still paying quite a lot for a device that won't really be useful.

iBall has sent us a number of extremely affordable laptops over the years. The Compbook Exemplaire and Compbook Marvel 6 impressed us by focusing on the basics and delivering competent performance at rock-bottom prices, but they definitely had their shortcomings. Now, we have the opportunity to step up a little bit, and we're curious to see how far a little more money can take us.

The Compbook Premio v2.0 is physically pretty much identical to the Compbook Marvel 6 and Exemplaire. iBall seems to be reusing the same basic plastic mould but giving each model a different colour. This time, it's a very sober dark grey which we liked a lot. The lid is extremely glossy and has a metallic texture. The only thing we didn't really like was the white iBall logo which has just been stamped on. The lid flexes a lot, and we'd be wary of putting anything heavy on top of this laptop when it's closed.

When you flip the lid up, you'll see a full-sized keyboard with a bright red 'i' key, which has been an iBall trademark for years. We found it distracting the first few times we saw it, and it still is. It really detracts from this laptop and makes it seem slightly unprofessional. They keyboard layout is mostly fine, with a few niggles. The Delete key is in an unusual place, pushing the backslash key into the bottom row. We really missed having shortcuts to control the screen's brightness. The power button is in the top-right corner, and it's way too easy to hit by accident. These are all things we've pointed out before, and it's a little disappointing to see that nothing has changed.

The trackpad is also extremely low-end. It has a rough texture, and the mechanism is stiff and loud. If you use even a little pressure when typing or using the trackpad, the entire lower half of the laptop flexes and creaks. Thankfully, the keys have a lot of travel and aren't too mushy. We were able to type naturally, and overall it's not only possible but easy to be productive, which is much more than we can say for some of the things that pass as keyboards on many budget PCs and tablets. 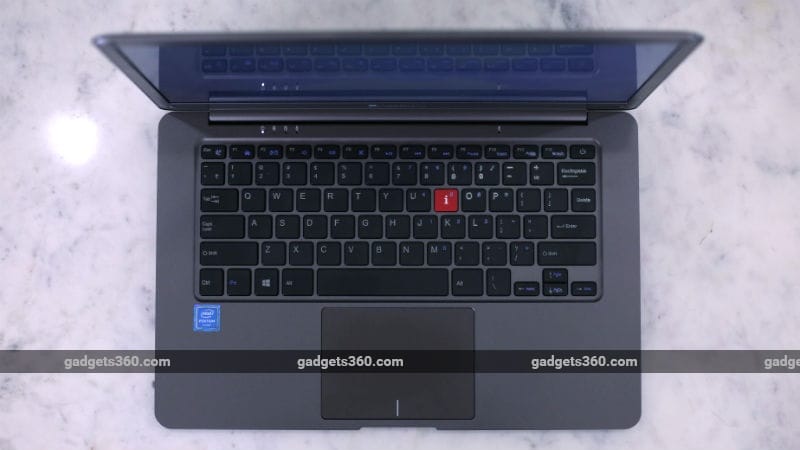 On the left side of the Compbook Premio v2.0, there's only the DC power inlet, a USB 3.0 port, and a mini-HDMI 1.4a port. However, on the right, there are two USB 2.0 ports, a collapsible Megabit Ethernet port, and a microSD slot. This is good to see, because iBall's previous entry-level laptops had only two USB ports in total and were reliant on Wi-Fi. There's another little surprise on the bottom of this device - a flap that allows you to add a 2.5-inch hard drive or SSD.

The Compbook Marvel 6 also supported an additional SATA storage device, but required us to unscrew its entire base, potentially voiding the warranty. The Compbook Premio v2.0 on the other hand has a flap that anyone can open. A plastic packet with the required screws and brackets can be found in the laptop's retail box. This is a huge improvement in terms of user-friendliness, but there are still the same caveats to deal with. According to iBall, the hard drive or SSD can consume no more than 1A of power, you cannot boot from it, and you might have trouble with USB devices because it will have to share power with the USB ports.

The Intel Pentium processor doesn't require a fan, and so there are no vents anywhere on the body of this laptop, which could be a good thing in dusty environments. This laptop is 240mm thick and weighs 1.3kg which makes it pretty portable by laptop standards. In the box, you get a wall-wart style charger, a cleaning cloth, a small user manual, some leaflets, and the SSD/ HDD mounting kit. Our review unit also had a pre-applied plastic screen protection film. 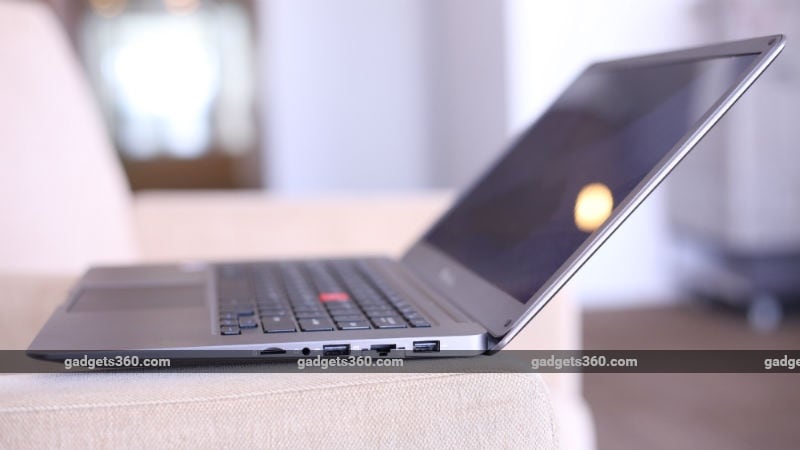 The big difference between the Compbook Premio v2.0 and older low-cost iBall laptops is that it uses an Intel Pentium processor, which has slightly more power than the Celeron line (and the Atom line before it). The Pentium N4200 is based on the same Apollo Lake platform as the Celeron N3350 in last year's Compbook Marvel 6, but it has four cores rather than two. Both have the same 1.1GHz base clock, but the Pentium N4200 has a slightly higher boost speed of 2.5GHz compared to 2.4GHz. The integrated Intel HD Graphics 505 GPU is also slightly faster and beefier.

The Compbook Premio v2.0 has 4GB of RAM and 32GB of embedded storage which is slower than an SSD. You can add a hard drive or SSD of up to 1TB as described above, or also use a microSD card of up to 128GB. The screen measures 14 inches and has a basic 1366x768 resolution, and there's a 38WHr battery. According to the user manual, this laptop is not meant to be used when plugged in. The company recommends leaving it alone when it's charging, and disconnecting it from power when it's in use.

For connectivity, there's Megabit Ethernet but surprisingly also dual-band Wi-Fi 802.11ac, as well as Bluetooth 4.0. There's also a built-in microphone and a VGA webcam. You get Windows 10 Home (64-bit) with no additional bundled software. 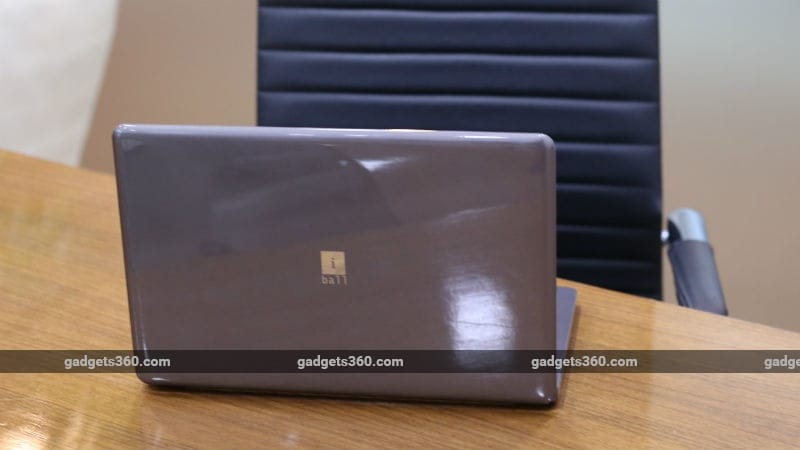 As soon as we turned the Compbook Premio v2.0 on and went through the Windows setup process, we were offered the update to the Windows 10 Fall Creators Edition. We allowed the process to begin, and then left the device on overnight. When setup was complete, we discovered that we had only 3.57GB of free storage. We had to go into the Windows Storage Sense configuration panel to manually delete the backup that Windows Update created to let us roll back in case of problems. Still, after the cleanup, we had just 12.9GB free. Subsequent updates might be impossible to install. We'd advise buyers to get rid of the "freemium" games that are installed on every Windows 10 machine by default.

We found the screen to be washed out, and the inability to easily adjust brightness was a major irritant throughout our review period. You can go to the Windows 10 Action Centre, but even there you can only cycle one way in 25 percent increments. The Compbook Premio v2.0 was able to play all sorts of video formats smoothly, including several of our 4K video samples thanks to the CPU's hardware decoding capabilties. However, the screen is pretty fatiguing, and you might not really enjoy sitting through an entire movie. The speakers are pretty loud, but low-quality.

While the keyboard was a little mushy, we were able to type at almost our regular pace and be productive. The space bar has to be hit near its centre in order to work, and we had to be conscious of hitting the power button by accident. The entire lower body of the laptop bends and creaks when typing. Windows gestures don't work too well on the trackpad, and its rough texture can be uncomfortable after a while. However, with all that said, this is still a relatively powerful computer which costs very little. We found that some of our benchmarks didn't work on last year's Compbook Marvel 6, and we had more success this time around. PCMark 10 gave us 1,378 points, and Cinebench R15 returned scores of 45 and 133 respectively in its single-core and multi-core tests. SiSOFT Sandra's CPU and memory bandwidth tests caused Windows to crash with a Blue Screen of Death error, which is a rare sight these days.

Real world-usage was fairly smooth. There were occasional bouts of lagginess but overall, Windows 10 didn't give us any trouble, and we were able to surf the Web with multiple tabs open, stream video, and even play a few games. Our 3.24GB file encryption test took 18 minutes, 54 seconds which is around four times as long as today's mainstream laptops would take. Encoding a 1.3GB 1080p AVI video file to 720p H.265 took 9 minutes, 15 seconds.

We didn't have enough space for even older 3D games from Steam, but we were able to install a few casual games such as Don't Starve and Plague Inc. Both were completely playable, with smooth visuals, though these aren't exactly action-heavy. We also tried Age of Empires: Castle Siege from the Windows Store, and it ran quite well too. This game stuttered on the Compbook Marvel 6, and we can see the difference the upgraded processor makes. Unigine Valley gave us an average of 9.2fps at the native 1366x768 resolution, and 3DMark Fire Strike returned 381 points.

Battery life was impressive, again thanks to the low-power processor. We were easily able to get through a full workday with casual Web surfing and typing. However, games took a toll and we could see the charge level dipping quickly. Battery Eater Pro ran for 5 hours, 11 minutes, which is around double of what most mainstream laptops can achieve. 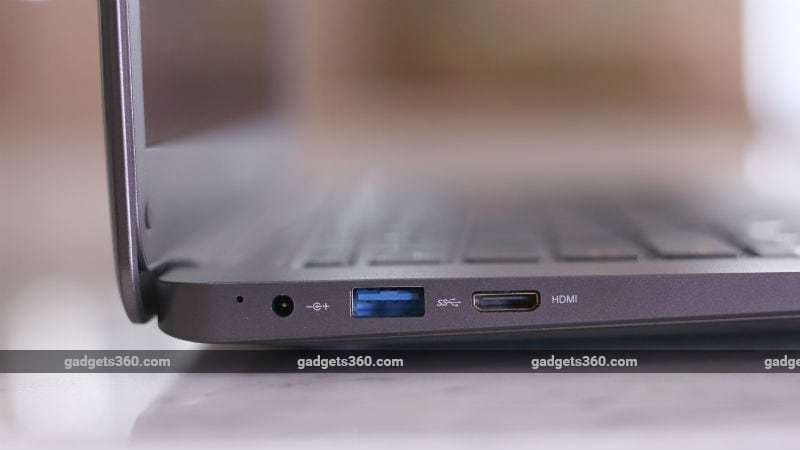 Verdict
Other than the CPU, amount of RAM, and number and type of ports, this laptop is essentially the same as the Compbook Marvel 6. However, these upgrades make a huge difference. While we could survive with last year's model, this one actually lets us play games, enjoy rich content, and get a lot of work done. While the official MRP is Rs. 21,999, we've seen this laptop sell for around Rs. 19,500 online, and that's including the Windows 10 license.

Many people spend more than this much on their smartphones, and change them every few years. What's most exciting is the possibilities that open up when people who have never been able to afford fully functional PCs now have options like this available to them. Students, office workers, and home users alike can get a lot of stuff done.

Still, things are far from ideal, and we really would have liked to have seen iBall fix some of the issues we've pointed out repeatedly. As the cost of technology keeps falling, we hope that the company will turn its attention to usability and build quality with its next models.

Molly's Game, The Expanse, Cardi B, and More – The Weekend Chill
Redmi Note 5 Pro to Go on Pre-Orders Today at 12pm for the First Time