A premium Ultrabook for the style-conscious business traveller.

The Spectre line of laptops is HP's premium range of sleek and highly portable computing devices. The company refreshed its convertible models recently, and today, we'll be testing the new Spectre x360 2-in-1. It's available in both 15-inch and 13-inch versions, and we'll be checking out the smaller one, which is currently on sale in India.

The model we have is the 13-ap0101tu, which boasts of top-end specifications such as an 8th Gen Core i7 CPU, plenty of RAM and storage, and an interesting feature called Sure View which is said to prevent prying eyes from looking at the content on your screen. The HP Spectre x360 13 doesn't come cheap, and the configuration that we have will set you back by a cool Rs. 1,50,000 (street price).

This laptop certainly looks the part, but it's now time to see if it can deliver equally good performance.

The Spectre x360 13 is something that immediately grabs your attention thanks to its tiny footprint and the new ‘chiseled' design. The ‘Dark Ash Silver' colour looks stealthy, and is complemented nicely with bronze accents on the borders of the frame, the hinge, and the logo on the lid. The laptop measures just 14.5mm thick and doesn't weigh much at 1.32kg. The bronze sides deliberately taper towards the front, creating the visual illusion that the laptop is a lot slimmer than it actually is.

The all-aluminium chassis of the HP Spectre x360 13 feels incredibly sturdy and we didn't encounter any unwanted flex, even when we applied a bit of force. The rear corners of the laptop are cut diagonally to create a gem-like effect. These sawed-off corners double up as spots for a backlit power button on the left and a USB Type-C port on the right. The latter supports the Thunderbolt 3 standard and there's another one of these on the right side of the laptop too. 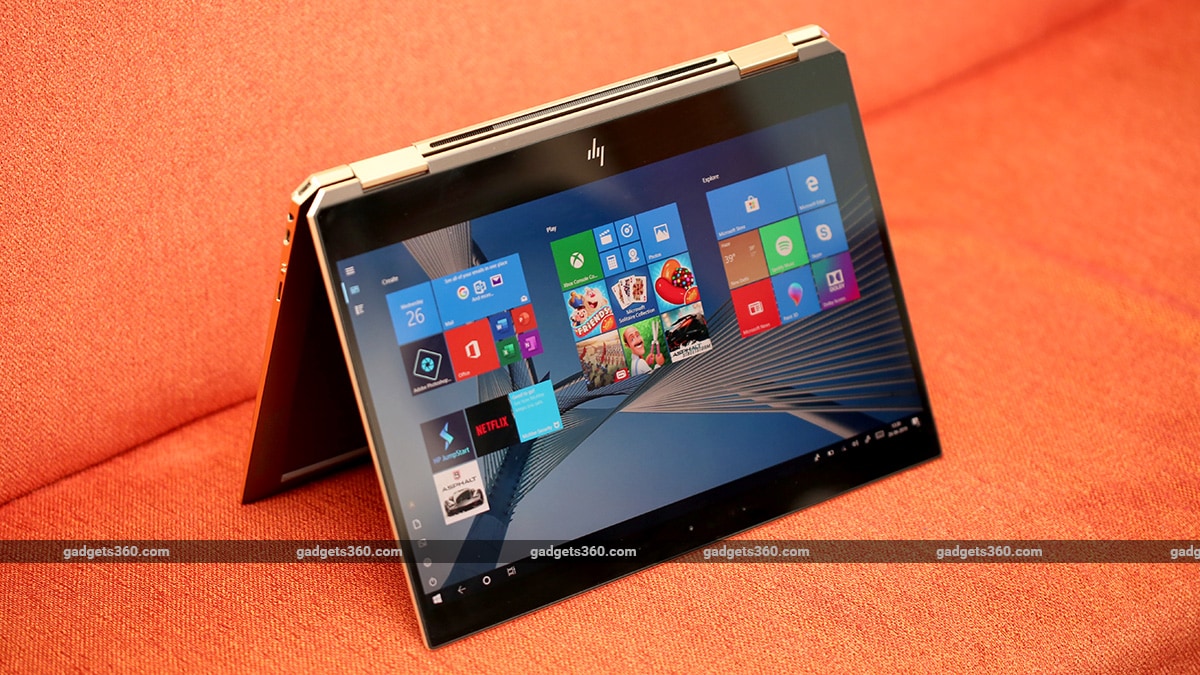 The HP Spectre x360 13 can be used in multiple modes

HP has thoughtfully provided a full-sized USB 3.1 Gen2 port on the left, so you're not stuck in case you forget to carry a Type-C dongle with you. All the USB ports support HP's Sleep and Charge feature, so you can charge USB devices even when the laptop is off. You also get a 3.5mm headphone and microphone combo socket, and a microSD card slot. We would have preferred a full-sized SD card slot as we didn't have much use for a microSD one.

The 13.3-inch display has a full-HD (1920x1080) resolution with a 120Hz refresh rate and supports 10-finger touch input. The high refresh rate offers a fluid feel when you're dragging anything around on screen and when scrolling through menus. The HP Spectre x360 13 has an IPS panel, so viewing angles are fairly wide and colours have good saturation. The display is protected by Corning Gorilla Glass NBT, which has a glossy finish and attracts reflections.

The undoubted highlight though is HP's Sure View privacy feature. Enabling it activates a polariser film over the display, which considerably narrows the horizontal viewing angles. With it enabled, it's nearly impossible to see anything on the screen if you're looking at it at an angle, from either the left or the right side.

The idea behind this is that the person sitting next to you won't be able to see what you're doing, in case you're working on something sensitive. This is perfect for when you're travelling or in any public place and you want to keep prying eyes away. One thing to keep in mind though is that colours will look washed out even if you're viewing the display head-on, but text is legible. 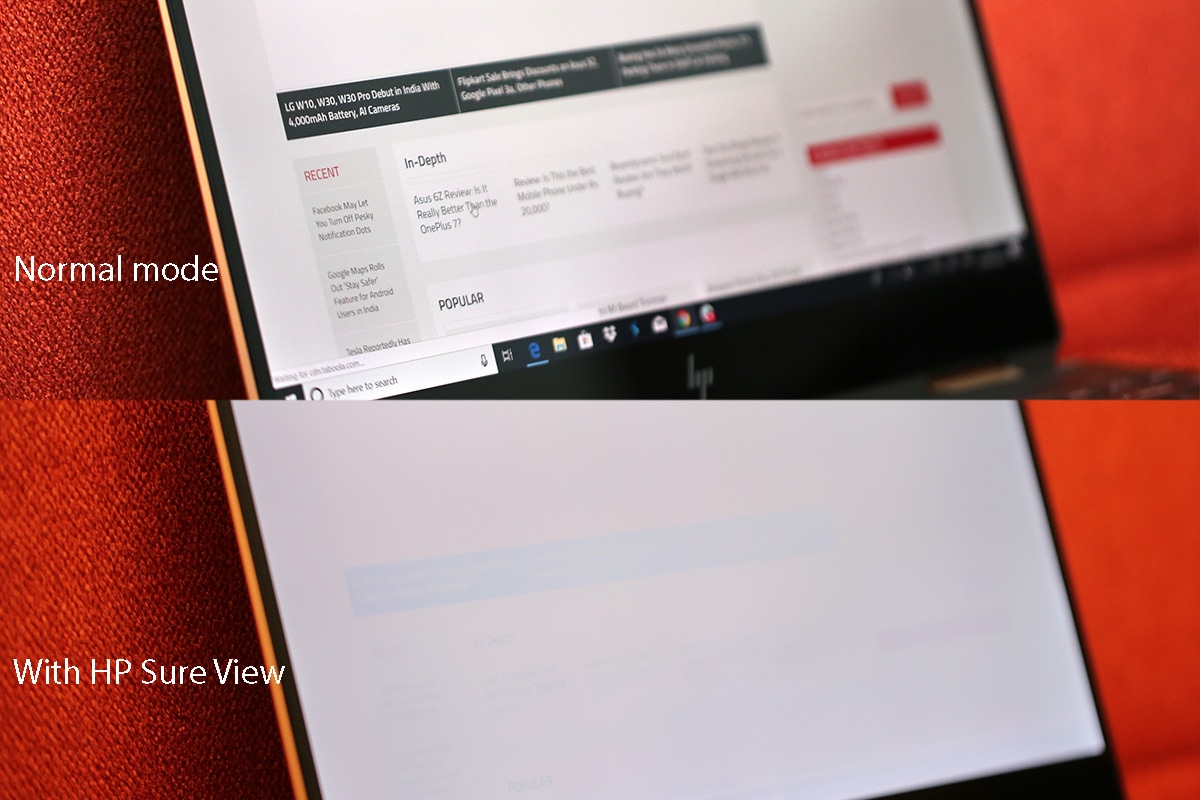 The keyboard keys on the HP Spectre x360 13 are spaced well and the backlighting is even across them. The travel is a little shallow, but we got used to this after a while. The keys aren't noisy either, which is something we liked.

The trackpad is extra wide, and on one hand, this offers more space for tracking, but on the other, it's a pain when you need to right-click as your thumb instinctively goes to the middle of the trackpad rather than the right, where it's recognised correctly. There's a fingerprint sensor here too, which works well for Windows Hello authentication.

You get a total of four speakers, tuned by Bang & Olufsen, two of which are placed above the keyboard, while the other two are on the bottom, firing downwards.

The laptop also has a built-in accelerometer and gyroscope, so the orientation of the display changes automatically based on how you're using the device. You also get Wi-Fi 802.11ac with 2x2 MIMO antennas and Bluetooth 5. The laptop ships with a compact 65W Type-C power adapter, and we were able to power and charge it using a standard Type-C phone charger too. 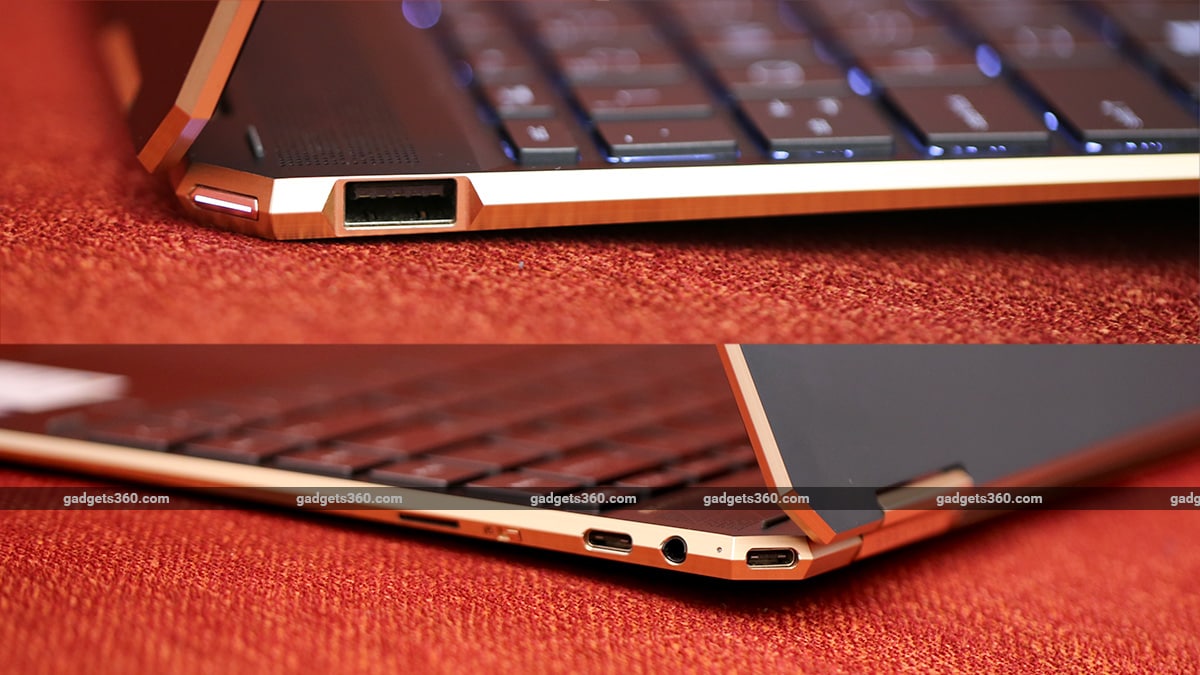 There are a decent amount of ports, considering how slim it is

For software, you get a trial version of McAfee LiveSafe and some common apps from the Windows store. HP also has some of its own utilities preinstalled, such as Command Center and Support Assistant for managing power profiles and keeping drivers up to date. You also get the full version of Microsoft Office Home and Student Edition, which is a handy addition.

Despite having a Core i7 CPU, this version of the Spectre x360 13 manages to run relatively cool, given the depth of the chassis. With casual workloads such as editing documents within a Web browser and some music streaming over Bluetooth, the laptop ran quietly and the fans weren't audible. The bottom rear portion, near the exhaust vents, runs mildly warm but it's not something we noticed too much when using this device on our lap.

The HP Spectre x360 13 offers excellent portability and the low weight means you barely notice it when carrying it in a backpack. The fit and finish of all the parts is also top-notch and it looks premium from pretty much any angle.

The dual-hinge on the HP Spectre x360 13 gives you plenty of flexibility for how you wish to use this device. The lid folds all the way back, so it can be used as a tablet too. Granted, Windows 10 isn't the best operating system for touch-enabled apps, and even today, the selection isn't as diverse as what you can get for Android and iOS. However, it's good enough if you simply wish to watch a video or use social and chat apps. The device is quite thick in tablet mode and isn't too comfortable for one-handed use for very long. 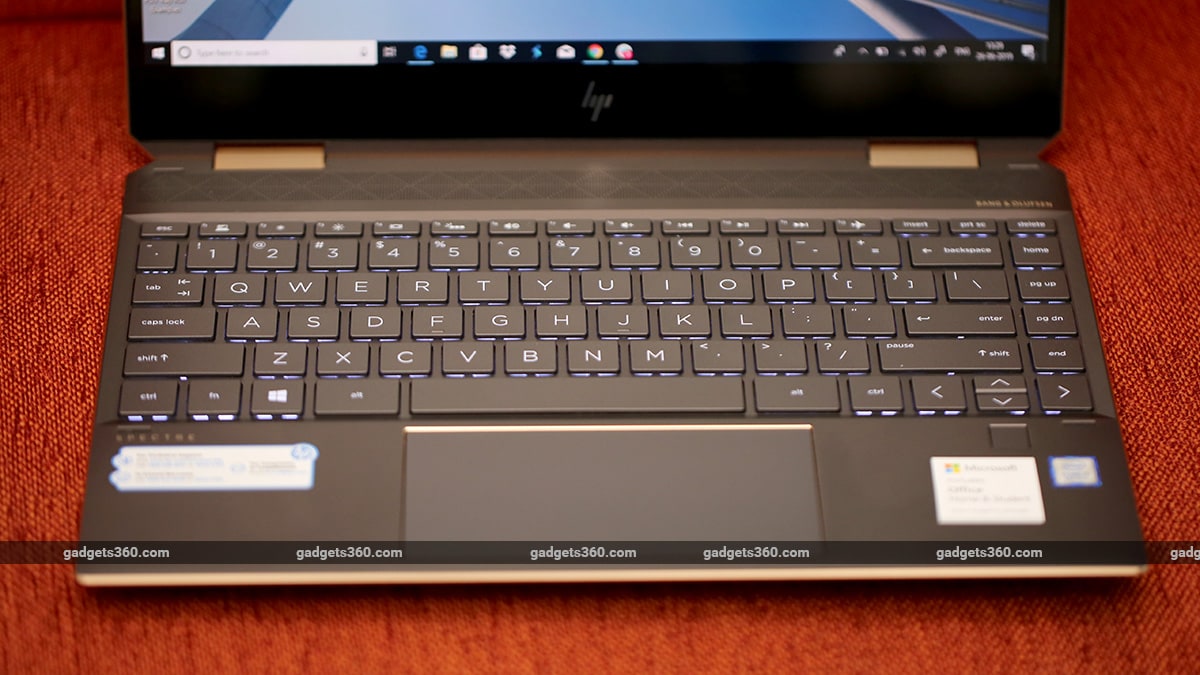 The keyboard is comfortable but the trackpad is unnecessarily wide

The thick bezels on the top and bottom of the display actually come in handy when you need to hold the tablet vertically for browsing the Web or reading a book. HP also throws in a stylus with the laptop, and you can take advantage of the pressure-sensitive tip for sketching and drawing. The stylus uses a AAAA battery, and unfortunately, cannot be magnetically docked to any part of the laptop, which means you need to remember to carry it around with you.

The webcam can shoot full-HD videos and the quality is pretty good, even with not-so-great indoor ambient lighting. The HP Spectre x360 13 also has a physical kill-switch, located on the right side of the laptop, which disables the camera at hardware level. This is handy for those concerned about privacy invasions. We did notice at times that apps such as the default camera app failed to recognise the Webcam after we had disabled and re-enabled it. We had to relaunch the app to get it to work.

Audio quality from the four speakers is very good. The volume gets sufficiently high, there's good detail in the mid-range, and vocals are crisp. There isn't much bass but the sound isn't tinny either. Audio comes through loud and clear, no matter the orientation of the laptop. The one thing we miss though is having a physical volume rocker. This is something that's very convenient when using any 2-in-1 as a tablet, and the lack of it on the Spectre x360 13 means we had to fumble around with the on-screen controls. 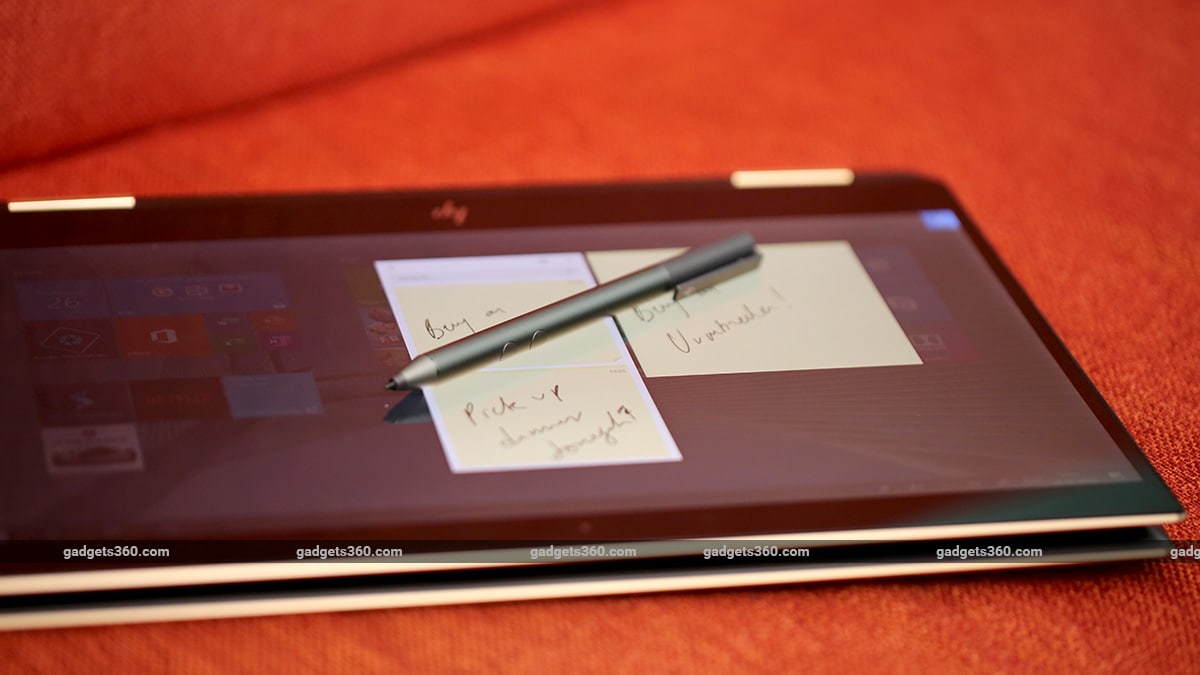 The HP Spectre x360 13 is a powerful, premium 2-in-1 laptop, which is also extremely portable

Benchmark performance is good, for a U-series Intel CPU. In PCMark 10, we got a score of 4,009 points, while in 3DMark Fire Strike, the laptop returned a score of 1,198 points. The time taken for compressing a 3.2GB folder with assorted files was 3 minutes and 41 seconds, which is good. The faster SSD also performed well in synthetic tests. We got Gigabit speeds for sequential and random read bandwidth in SiSoft Sandra, while the equivalent write speeds hovered at around 500MBps.

This is not a laptop you would typically use for gaming, and understandably so, heavy titles such as Shadow of The Tomb Raider managed an average of just 12fps, even using the ‘Lowest' graphics preset with the resolution scaled down to 720p. Casual titles from the Windows Store, such as Asphalt 9: Legends, ran just fine.

HP claims that the Spectre x360 13 can deliver around 22 hours of runtime on one charge, but the real figure is a lot lower. With actual day-to-day usage, we managed to hit around five to six hours, which is still not bad. With the Windows battery slider set to ‘Better battery,' we were able to use the device casually for nearly eight hours, which typically involved Chrome usage, watching online videos, and streaming music over Bluetooth, all with the keyboard backlight turned on. In the intense Battery Eater Pro test, with the battery profile set to ‘Balanced', the laptop ran for 2 hours and 15 minutes.

Verdict
The HP Spectre x360 13-ap0101tu is a power-packed laptop with excellent build quality and a premium design. It's very portable and we like the fact that it doesn't weigh you down when you're travelling. You get a good selection of ports, a sensitive touchscreen with a clever privacy feature, a comfortable keyboard, and very good speakers.

We do wish there was a volume rocker so controlling the volume is easier when using this 2-in-1 as a tablet. A full-sized SD card reader would also have been preferred to the microSD one. Lastly, the trackpad is a bit unnecessarily wide, which makes it cumbersome to reach the right trackpad button area.

The variant that we're reviewing is currently available on HP's website for Rs. 1,49,990, which is not too bad considering its features, performance, and premium design. This sort of laptop is primarily aimed at business executives who travel a lot but want to do so in style. If that's you, then the HP Spectre x360 13 is worth considering, as its easily one of the better premium convertible Ultrabooks in the market.

Further reading: HP, HP Spectre x360 13, HP Spectre, laptop, 2-in-1 laptop
Roydon Cerejo Email Roydon Roydon Cerejo writes about smartphones and laptops for Gadgets 360, out of Mumbai. He is the Deputy Editor (Reviews) at Gadgets 360. He has frequently written about the smartphone and PC industry and also has an interest in photography. With over a decade of experience covering the consumer technology space, he is also an avid sci-fi movie and TV show geek and is always up for good horror flick. Roydon is available at roydon@gadgets360.com, so please send in your leads and tips. More
Boeing Forced to Park Grounded Planes in Staff Car Parking Lot
Tesla Has Enough Orders to Set Delivery Record, Musk Tells Employees: Report