HP's premium laptops have been marketed under its Envy and Spectre series, and today, we'll be testing an AMD-based Envy x360 13, which was launched in India in late 2018.

The x360 13 in the name signifies that this is a convertible 2-in-1, which means this laptop can be used as a tablet too. The model that we have today is priced at Rs. 77,990 on HP India's online store, and packs in a good set of specifications. Let's see if it makes the cut.

The HP Envy x360 13 is compact and very well built. The metal used for the lid and chassis is sturdy, and this device gives off a very premium feel when you hold it. The slim bezels around the display contribute to this compact design, and the entire laptop has a smaller volume than an Apple MacBook Air (2017).

It's also very slim at 14.9mm in thickness, and is comfortably light at 1.3kg. The laptop is currently only available in a ‘Dark Ash Silver' trim, which looks good, but the matte body does attract smudges and fingerprints. The dual-hinge system lets you position the lid even at obscure angles.

For a laptop this slim, you still get a decent selection of ports, including two full-sized (Type-A) USB 3.1 ports, a USB Type-C port (USB 3.1 Gen2) which supports HDMI and DisplayPort video output with the right adapters, a microSD card slot, a 3.5mm headphone and microphone combo socket, and charging port. The power and volume buttons are also placed on opposite sides, so they can be easily accessed when using the Envy x360 13 in tablet mode. 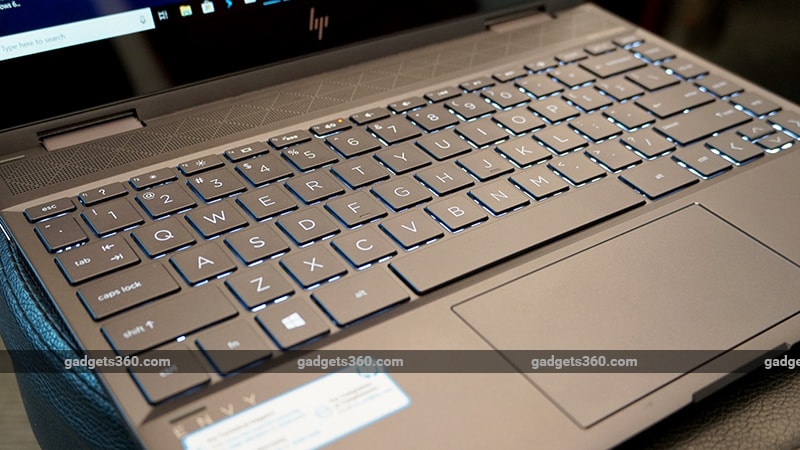 The 13.3-inch IPS display has very good brightness and colour reproduction. Images look sharp and crisp thanks to the decently high full-HD resolution. HP has used Corning Gorilla Glass NBT, which is a scratch resistant glass specially designed for touchscreen laptops. Touch response was generally good in our experience but we had a few instances in tablet mode when our input wasn't registered correctly. This occured when trying to interact with elements along the edges of the display but it wasn't consistent as we weren't able to replicate it on demand.

The display still has sizeable bezels on the top and bottom. On the top, we have a HD webcam along with an infrared camera for Windows Hello face authentication. This works well in pretty much all lighting conditions. The quality of the webcam is not bad either and given enough ambient light.

On opening the lid, you'll see a well-spaced chiclet keyboard with a single level of LED backlighting. The lighting is even across the keys but it's a little too bright at night. We wish there was a way to adjust it. The keys themselves have good travel and good tactile response. They aren't noisy, which is a nice bonus. The Up and Down direction keys have been squeezed together, making them a little inconvenient to use.

The palm-rest area isn't very spacious, which means we usually ended up placing our wrists right at the edge of the laptop to be able to type comfortably. The trackpad seems wider than usual and has a smooth texture, but two-finger scrolling felt a little laggy and sluggish in our tests. 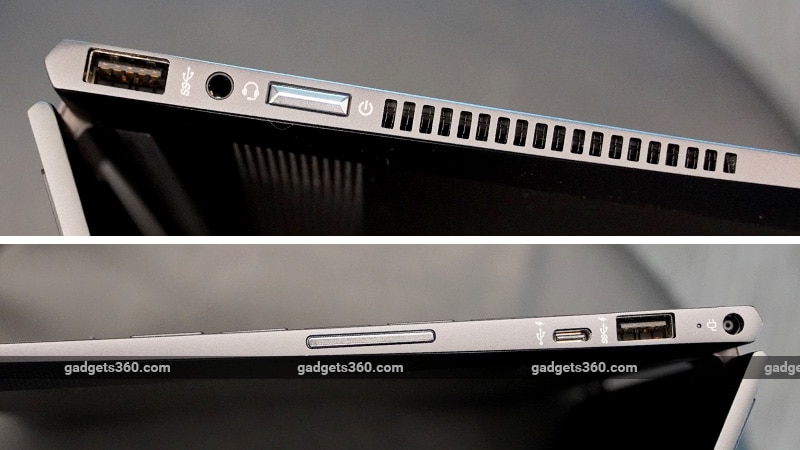 For a slim laptop, the HP Envy x360 13 has a good selection of ports

There are a total of four speakers from Bang & Olufsen, two of which are placed at the bottom with the other two just above the keyboard. You get a companion app for tweaking the bass, treble, and vocal clarity in music or movies. The laptop has a strip of perforated vents on the bottom for air intake, and one on the left of the laptop for venting hot air.

The Envy x360 13 is supposed to ship with a 65W power adapter, but our review unit came with a 150W adapter. You also get the HP Pen with it, which is a battery-powered stylus with a pressure-sensitive tip. It costs around Rs. 2,700 if bought separately.

HP has used an NVMe M.2 SSD, which means we should expect good read and write speeds. The Ryzen 5 CPU is the 2500U, which is a quad-core model with multi-threading and has an integrated Radeon Vega 8 GPU. Other connectivity options include dual-band Wi-Fi 802.11ac with 2x2 MIMO antennas and Bluetooth 4.2.

The HP Envy x360 13 runs on Windows 10 Home 64-bit. You get the usual selection of Windows Store apps preinstalled, along with some third-party ones such as a 30-day trial of McAfee LiveSafe. There are also some programs from HP such as Command Centre, which lets you switch between different battery profiles, Recovery Manager, Audio Switch, and Jump Start, which offers tips and shortcuts for Windows and HP's software.

Having an SSD as a boot drive makes a huge difference in the responsiveness of Windows 10 and apps. The Envy x360 13 is quick to boot into Windows and even resuming your work from standby or hibernation is snappy. The laptop can also be used in various folded positions such as ‘stand' or ‘tent' modes, besides the standard laptop and tablet modes. It works well as a tablet, provided you have something to rest it on, such as your lap. Otherwise, it's a little too big and heavy to be carried around. 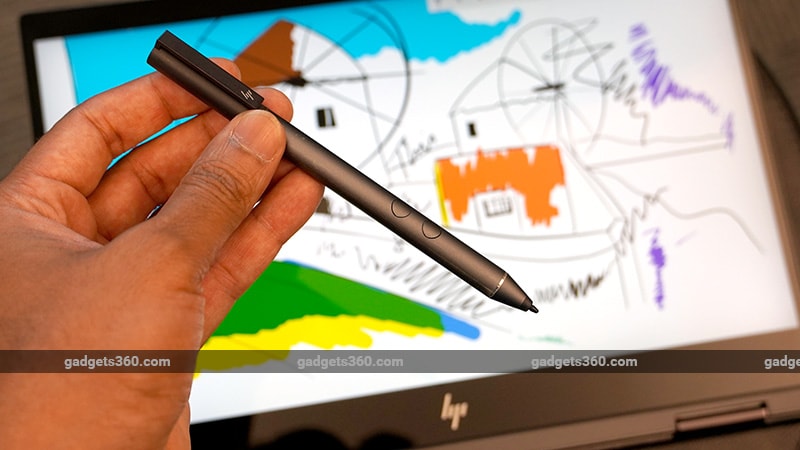 The HP Pen works well with Windows Ink, which offers stylus-friendly programs such as a notepad and a sketchpad. The pressure-sensitive tip of the Pen is handy when drawing. However, Windows 10 is still long way from iOS and Android when it comes to the tablet experience, and the primary reason for this is a lack of good apps in the Windows Store.

You can use regular desktop apps in tablet mode too, but since these are designed to be used with a mouse cursor, interacting with your finger can be awkward. You can use the Pen for more precise input but you'll need to remember to carry it with you as there's no docking mechanism for it and it doesn't stick to the laptop magnetically either.

Another reason the Envy x360 13 is not a replacement for your iPad is that it runs fairly warm pretty much all the time. From the moment you boot it up, the fan is audible and it gets louder when you really begin stressing the CPU or GPU. The left side also gets hot quickly since that's where hot air is vented from, and this makes the device a little uncomfortable to hold when in tablet mode.

We don't think it's entirely the fault of the CPU since the Ryzen 5 2500U CPU in the Asus VivoBook 15 (X505Z) didn't have this problem when we tested it. It's probably more to do with the slimness of the body that HP has designed, as there's only so much thermal management that can be done in the given space.

In synthetic benchmarks, we got similar scores and at times better than those of the Asus VivoBook 15 (X505Z) which also has the same CPU. In Cinebench R15, we got a multi-threaded CPU score of 613 points and an OpenGL score of 49fps for the GPU. PCMark 10 scores were consistently around 10-15 percent higher, at 3,260, 2,744 and 3,470 points in the Standard, Extended and Express benchmarks respectively. In real-world tests, the Envy x360 13 took 6 minutes and 21 seconds to compress a 3.2GB folder of assorted files using 7zip, and encoding a 1.36GB AVI video file to MKV using Handbrake took 2 minutes and 36 seconds. 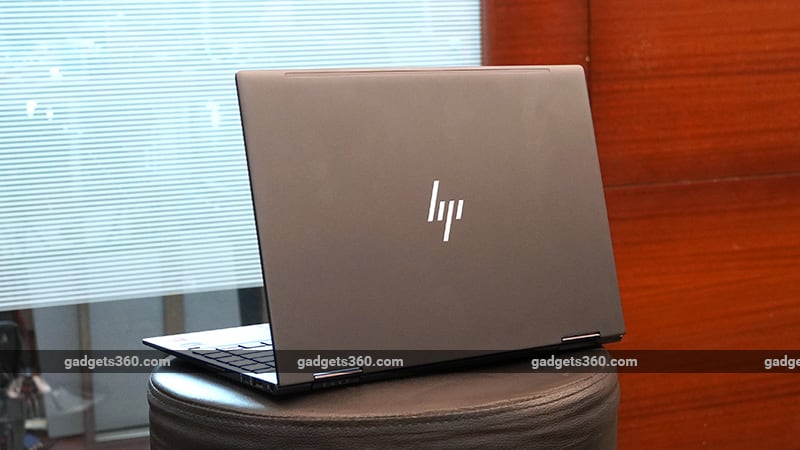 This laptop isn't built for gaming, and even slightly older titles such as Rise of The Tomb Raider gave us somewhat playable framerates only after dropping the resolution to HD and lowering the graphics quality and turning off most of the frills. However, casual games from the Windows Store ran fine for us. We tried some of the free ones such as Asphalt 9: Legends, which ran smoothly even at the highest graphics preset. However, the heat from the exhaust vent made it impossible to comfortably hold the Envy x360 13 like a tablet to play such games on for more than a minute.

Audio is one of this device's strong suits. The four speakers can get fairly loud, and we didn't notice any distortion when playing music or watching movies, even at full volume. Bass is understandably not very prominent, but the sound isn't tinny. Vocals are crisp and the overall sound signature is warm and pleasant. The speakers sound best when in laptop mode, but are quite capable even in other usage modes.

There's a 53WHr battery, but with actual use, we struggled to make it through a workday just on battery power alone. In Battery Eater Pro, we got a runtime of 2 hours and 7 minutes, which is good. However we just about managed to get close to 4 hours of casual use before the battery saver mode kicked in. This isn't great considering that people need to spend their workdays multitasking like we did, such as watching a bit of YouTube, browsing the Web, and using online applications such as Google Docs all day.

The HP Envy x360 is a slim and stylish convertible with a good display and speedy Windows performance. Gaming isn't its strong suit, but this device wasn't meant for that kind of heavy use. Apart from that, the AMD CPU is a capable multitasker and the fast SSD ensures quick loading times for programs. This laptop can be used as a tablet, but like most Windows convertibles, the experience is far from ideal and won't replace your iPad anytime soon. Battery life was disappointing but our biggest issue is the fact that this device runs warm nearly all the time, and the constant drone from the fan can be distracting, if not annoying.

At around this price, there's a quite a lot to choose from. Dell has a direct competitor to the Envy x360 called the Inspiron 13 7386 2-in-1. This model shares pretty much the exact specifications as the Envy x360 but it's based on the Intel Core i5-8265U CPU. You also get Dell's Active Pen bundled, all for the price of about Rs. 76,900. If you're not into convertible laptops, Asus has the ZenBook 13 UX333 which could also be worth considering.