G-Technology is a relatively new and unknown name in the storage industry, though it's been around for a while in international markets. It had its beginnings as a specialised storage vendor targeting creative professionals, particularly those who use Apple's Mac ecosystem. The company was acquired by Hitachi Global Storage Technologies (HGST), which itself is now owned and operated by Western Digital. WD is a brand we are much more familiar with, and thanks to its global reach, we now have the G-Technology product lineup here in India. WD still intends to target creative professionals, and these products will live alongside a few similar offerings from HGST, SanDisk, and WD itself.

The G-Technology range is pretty vast, encompassing enterprise-class storage servers, modular desktop RAID boxes, and equipment for demanding video and photo production environments, even outdoors. Use cases include editing high-resolution video live in the field, managing footage from multiple cameras, backing up and transporting huge files quickly, and large-scale collaboration. Against that background, the G-Drive Mobile SSD, which we're reviewing today, stands out a little. It is possibly the company's smallest and most portable product, with a fairly straightforward purpose. Let's see what you get, and whether it's worth choosing over similar products, including several from WD's other brands. 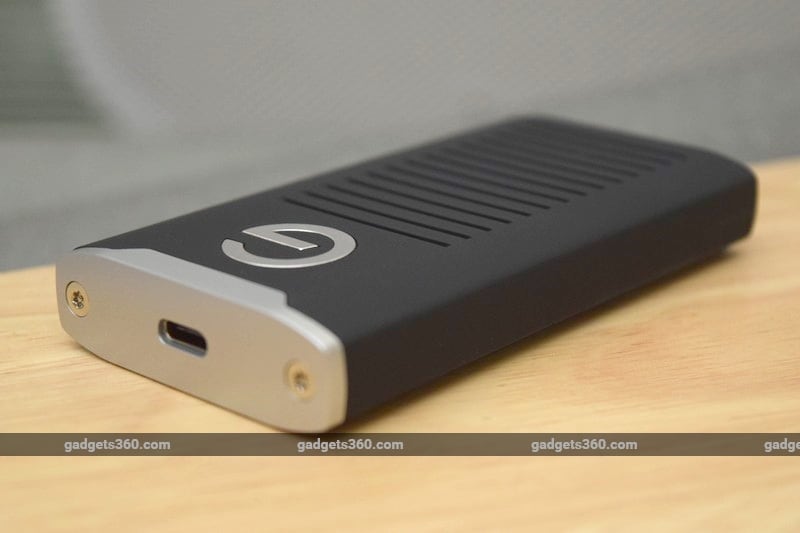 Many portable SSDs are simple and unobtrusive, but this one is designed to stand out. First of all it's pretty large, relative to the Samsung SSD T5 and WD My Passport SSD, amongst others. At 9.5cm long, 5cm wide and 1.45cm thick, it's about the size of a visiting card holder. It will fit in a pocket, but you'll definitely feel its 86.2g weight.

It's also designed to grab attention, with a matte black body that's offset by a silver endcap with exposed screws, a shiny chrome 'G' logo, and bright metallic blue accents. The ribbed cutouts on the front and back are quite deep, so you can't really see the blue inner layer with its perpendicular ridged pattern until you get up close, and the pop of colour comes as quite a surprise. This is actually an “aluminium core”, according to the company, which acts as a heatsink for better sustained performance. The visible metal and the heft of this drive make it feel like a premium product.

You get a USB Type-C to Type-C cable and a Type-C to Type-A cable in the box. Both are just about 12cm long which should be fine for laptop users but might force you to dangle the drive from a desktop's front or rear USB ports. We were happy to see the USB SS10 logo embossed on both cables, which means they can handle the full 10Gbps bandwidth of the USB 3.1 Gen 2 standard – this isn't something you can take for granted with Type-C cables and devices. The only other things in the box are a few leaflets including a pictorial quick start guide.

Surprisingly, the fact that this drive supports USB 3.1 Gen 2 is only mentioned in very tiny text on the side and rear of the box. Even the IP67 rating for water and dust resistance is barely highlighted. In other footnotes, G-Technology says that the G-Drive Mobile SSD has been drop-tested at up to 3m and can withstand being crushed by a load of up to 453kg (1000lbs). Shock and vibration resistance are also advertised, but there are no details or formal ratings.

The only performance specification that G-Technology advertises is a 560MBps data transfer rate, and we're left to assume that that's a best-case scenario for sequential reads. If you need more speed, the company also sells a Mobile Pro SSD with Thunderbolt 3 that can hit up to 2800MBps. Capacities range from 500GB to 2TB, and we have a 500GB unit in for review. There's no mention of endurance or support for encryption. You do get a five-year warranty, though. 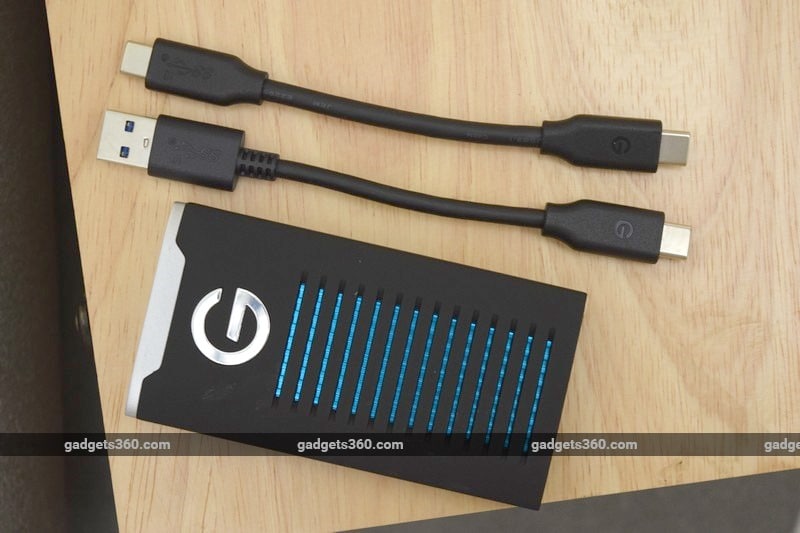 If you haven't heard of the G Technology brand, you wouldn't know that its products are primarily aimed at Mac users. In fact, nowhere on the box does it say that the G Drive is formatted to Apple's HFS+ file system, but it is, and it will not be usable on Windows PC if you just plug it in. This was not clear to us at all before we began using the drive, but we later noticed that the tiny text on the side of the box does say that the drive is compatible with Windows 10, Windows, 8.1, and Windows 7 “via reformat”.

The HFS+ file system is perfectly fine for Mac users and makes sense if you are one, but you'll need third-party software to read or write to this drive on Windows unless you reformat it. Most drives these days ship using the cross-compatible ExFAT or FAT32 file systems for this reason. (If you're part of G-Technology's target audience and value the Mac-first philosophy, you might consider the newer APFS file system which is optimised for SSDs but can only be used on Macs running macOS High Sierra onwards and won't work with Time Machine.)

The Windows Disk Manager will recognise the G-Drive Mobile SSD and let you format it, but until then it can't be mounted. After confirming that there was no factory-loaded software or data on the drive using a Mac, we reformatted our review unit to ExFAT for testing. We had no trouble using this drive after that. It was perfectly happy being shared across computers and operating systems.

The formatted capacity of our 500GB review unit was 465.76GB and SiSoft SANDRA detected the SSD itself as a SanDisk X600, which is an M.2 SATA module from the WD-owned brand's OEM product portfolio, using WD's 64-layer 3D NAND flash. Product listings confirm the 560MBps sequential read rating and tell us that sequential writes should be 530MBps.

The trusty CrystalDiskMark benchmark showed sequential read and write speeds of 562.2MBps and 514.8MBps, using a saturated queue depth of 32. Random read and write speeds were a more realistic 134.2MBps and 134.3MBps respectively. These numbers put the G-Technology G-Drive Mobile SSD ahead of the WD My Passport SSD and on par with the Samsung SSD T5. With ordinary day-to-day usage, there's absolutely no comparing a portable SSD with a spinning hard drive – if you haven't used one before, you'll be amazed by how quickly files and folders can be copied across, even when dealing with hundreds of gigabytes' worth of data in one go.

We're quite disappointed that G-Technology doesn't supply any software for encryption, backups, health monitoring, and firmware updates. This seems to be standard for other manufacturers now, including WD. At least Mac users can take advantage of Time Machine for backups. 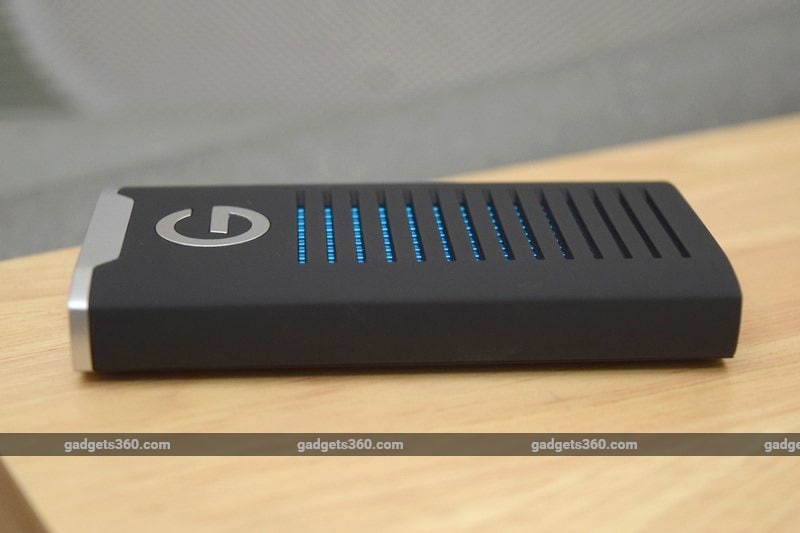 Verdict
G-Technology might have a base of regular customers for its enterprise-grade hardware, but if it's trying to break into the prosumer market, it has to communicate better. The IP67 rating and ruggedness are potentially the biggest selling points of the G-Drive Mobile SSD, but they're barely mentioned. Meanwhile, the lack of Windows operability out-of-the-box is a pretty big issue that also flies under the radar.

The 500GB model that we reviewed sells for Rs. 12,999 which is a lot more than the Rs. 9,500 that you can find the Samsung SSD T5 going for these days. If you value physical resilience and will find yourself working in harsh environments, the G-Drive Mobile SSD is obviously the better choice. Keep in mind that it doesn't support encryption, though.

product G-Technology might not be a recognised name for many buyers, but the high-end storage solution company's new portable SSD has wide appeal. 4 out of 5 stars