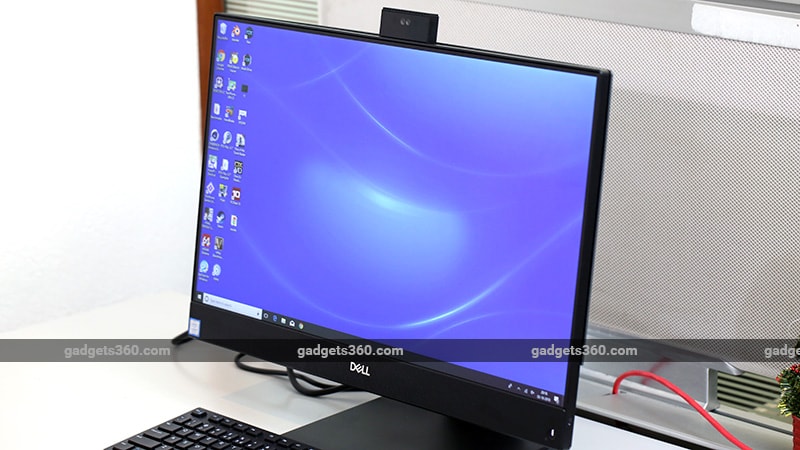 All-in-one or AIO PCs are great space-savers for home or office use. They don’t take up much room on your desk, as all the components are placed right behind the display. Apple’s iMac is one example of a pretty popular AIO that’s been a favourite with all kinds of users.

You’ll find a good selection of Windows-based AIOs too, and while most of them are designed for general-purpose multimedia use, there are a few out there that have the potential to double up as proper gaming systems. Last year, we tested one of these, the Dell Inspiron 27 7775, a premium AIO based on AMD’s Ryzen CPU and Radeon GPU.

Today, we’ll be testing the company’s new Inspiron 24 5000 series for 2018, which launched around April. Available in just one configuration on Dell India’s website, the Inspiron 24 5477 boasts of a touchscreen, 8th gen Intel Core CPU, and an Nvidia GeForce GTX 1050 GPU for under Rs. 80,000. That’s a pretty decent set of specifications, which not many others seem to be offering at this price. Let’s take a closer look at how it actually performs.

Dell’s new AIO has a pretty slick design from the front. The display has slim borders on three of its four sides. There’s a chin at the bottom which holds the stereo speakers, and a pop-up camera module at the top which also has extra sensors for Windows Hello face recognition. There’s nothing but a power button placed on the right of the chin and a Dell logo in the middle. You can tilt the display forward or backward but you can’t adjust its height or swivel it. The camera module is not motorised, so it has to be manually ejected or just left raised if you use face authentication.

Build quality feels quite solid, although the outer panels are all plastic. We like the stealth-black colour scheme of this AIO. Dell ships a matching wireless keyboard and mouse in the box too. The Inspiron 24 5477 is quite thick but the tapering sides mask this a bit. There are vents at the top for expelling hot air, while the bottom ones are used for intake.

There are a few ports on the left side of the AIO, for convenience. This includes a SD card slot, a USB Type-C (USB 3.1 Gen1) port, a full-sized USB 3.0 port, and a headphone/ microphone combo socket. The rest of the ports are at the back, which include a Gigabit Ethernet port, two USB 2.0 ports, two USB 3.0 ports, HDMI-out, HDMI-in, and an audio-out port. The neck of the stand comes pre-attached to the body of the AIO, so all you have to do when you take it out of its box is screw on the foot of the stand.

The 23.8-inch display has a matte finish, which doesn’t attract reflections. The brightness is more than adequate, but like most AIOs, there aren’t any physical controls to adjust the display settings. The same goes for the volume, although you get keyboard shortcuts for this. The IPS panel has a full-HD resolution but this is still a bit inadequate for sharp text and images with a panel of this size. Menus and text have a bit of jaggedness around the edges, which can’t be avoided. While the colours and viewing angles are decent, the black levels could’ve been better.

The review unit that we received from Dell has an Intel Core i5-8400T CPU, which is a desktop part with six cores but no Hyper-Threading, and integrated UHD Graphics 630 GPU. This is accompanied by a single 8GB stick of DDR4 (2666MHz) RAM, with another seemingly free RAM slot, according to software diagnostics. For storage, you get a massive 2TB Seagate hard drive, but running at the slower 5400rpm.

There’s also an unused M.2 slot, so we would have liked an option for an M.2 SSD or at least an SSHD drive at the time of purchase, but they are not available. One of this AIO’s biggest selling points is that there’s a laptop-grade Nvidia GeForce GTX 1050 graphics card with 4GB of GDDR5 memory. You also get Bluetooth 4.1, dual-band Wi-Fi 802.11ac with 2x2 MIMO antennas, and a webcam capable of shooting full-HD video.

The Dell Inspiron 24 ships with Windows 10 Pro, and you get the usual preinstalled apps from the Windows Store. There’s a 15-month subscription to McAfee Antivirus and a 30-day trial version of Microsoft Office. Dell also preinstalls its own programs including Mobile Connect, which lets you receive calls and notifications from the your Android phone or iPhone, on the PC.

The Inspiron 24 5477 didn’t make a very good first impression, as right from the get-go, Windows felt extremely sluggish. It took a while for the system to boot, and even with basic use, it was very laggy. Navigation in Windows wasn’t very fluid, and the system simply could not handle multitasking very well. Simple tasks such as opening Chrome or going to the Settings page in Windows could mean a wait for a good number of seconds, which is far from ideal. Uninstalling some of the pre-installed apps such as McAfee Antivirus did help, but on only slightly. The main reason for this seems to be the sluggish hard drive, which showed below-average performance in SiSoft Sandra’s File System Bandwidth test. While sequential read bandwidth was 110MB/s, the scores for sequential and random read and write bandwidth were under 70MB/s, which is disappointing.

The back of AIO isn’t easy to open up. You’ll first have to remove the stand, which is held in place by two screws, and then the back cover slides out of the way. After that, you can access the hard drive and the RAM module, but in order to get to the motherboard, you’ll have to take off another aluminium shroud. Here, we have a free M.2 PCIe slot, which can be used for an optional SSD. Since we had a 32GB Intel Optane Memory module in our lab, we popped it in to see how much of a difference it would make, without having to reinstall Windows. Using Intel’s Rapid Storage Technology (IRST) app, we were able to set up an Optane Memory profile. Windows was noticeably more responsive and boot times were bit quicker too, which is a good improvement. Dell also confirmed to Gadgets 360 that opening the back panel will not void the warranty.

The unused M.2 slot on the motherboard can be used for installing an additional SSD or Intel Optane Memory

We tested the HDMI input using a laptop, and were able to extend its desktop onto the AIO’s screen. The button for switching video inputs is located on the bottom of the chin, and it took us a while to find. However, just like Dell’s Ryzen-based AIO that we reviewed last year, the PC needs to be booted up and running in order for you to use the display as a secondary screen.

Despite the laggy Windows experience, the CPU and GPU performance was actually decent when measured in benchmarks. In synthetic tests like Cinebench R15, we got single and multi-core CPU scores of 132 and 630 points respectively, and 82.7fps in the OpenGL test. PCMark 10 kept failing for some reason, so we couldn’t run it. In 3DMark Fire Strike, we got a score of 5,506 points. File compression and video encoding were handled well too, with short completion times.

The GeForce GTX 1050 GPU is quite capable of running current-day games at decent framerates, provided you dial down some of the graphics quality settings. Far Cry 5 uses the very scalable Dunia game engine, and we managed to average about 32fps in the benchmark with the Ultra preset. With actual gameplay, we averaged about the same, but there was a bit of stutter and intermittent momentary freezes. In Metro: Last Light Redux, we averaged about 44fps with the Medium preset, and about 33fps with the settings cranked to High. Deus Ex: Mankind Divided also gave us pretty playable framerates averaging 30fps with the High preset. The resolution was kept at 1080p for all our gaming tests. The exhaust fan also manages to stay quiet, when the system is stressed which is very good.

One thing we really liked was the loudness of this AIO’s stereo speakers. You get audio enhancement thanks to the Waves MaxxAudio Pro software which lets you tweak the audio profile based on your current activity. Vocals in music and movies were crisp and clear, making them quite enjoyable. Bass was a little weak and there was no audible thump in the lower frequencies.

The keyboard is very basic but it’s comfortable to type on, and key presses aren’t loud. The bundled mouse is decently sized too and works well. We didn’t find much use for the touchscreen though, and this AIO would have been just fine without it too.

Verdict
The Inspiron 24 5477 would have been a complete package had Dell included an SSD in addition to the high-capacity hard drive. This would have made the experience so much better, right out of the box. Optane Memory is too expensive if you’re buying it separately. For example, a 16GB module will set you back by about Rs. 3,500. Instead, you could pick up a 240GB M.2 SSD for about Rs. 4,000 and reinstall Windows on it, for a significant speed boost.

With taxes, the price of this AIO goes up to almost Rs. 93,000, which is still fairly competitive, as it’s hard to find any other AIO at this price which matches it in terms of specifications. If gaming is what you’re after in an AIO, then the Inspiron 5477 is something you could consider. Just invest in an SSD and you should be good, while still staying within a budget of Rs. 1,00,000.

Facebook Marketplace Turns 2, Gets New AI Features and More
Microsoft May Have a Modular PC, USB Type-C Webcam in the Pipeline