Dell is one of the best-known names in the laptop market, and the Inspiron line is usually full of reliable, affordable models well suited to home users, students, and people with basic needs. Inspiron laptops are designed for everyday productivity along with entertainment, but they aren't necessarily inexpensive. The company knows that buyers these days expect laptops to be stylish and feature-rich, no matter their budgets, and so the Inspiron line has absorbed many of the little design touches and specifications that used to set the high-end XPS models apart.

Today, we're reviewing the Dell Inspiron 15 7572, which is the newest member of the high-end Inspiron 7000 series. Priced at Rs. 97,982 including taxes in India, this is a very premium offering, and so we're going to see how well it delivers on performance, features, build quality, and style. 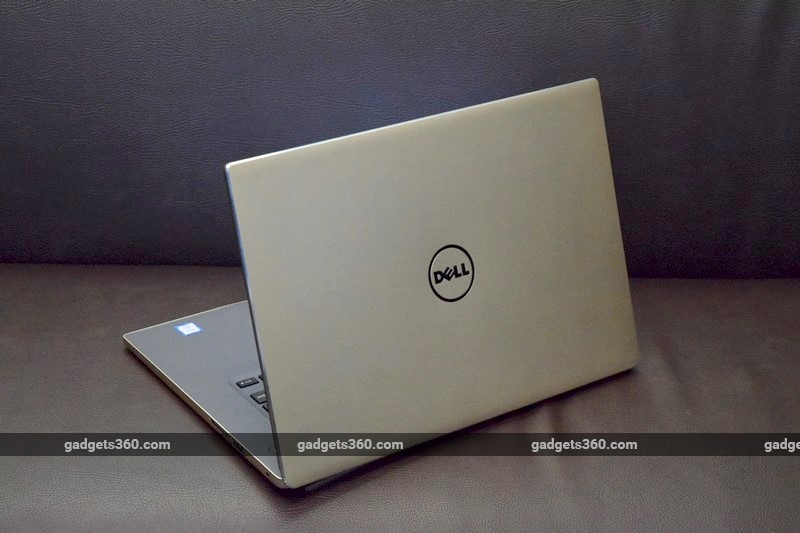 The Inspiron 15 7572 is relatively portable for a 15-inch laptop. It's just under 20mm thick and weighs 2kg. The lid is aluminium with chamfered edges while the base is also a metal shell that wraps around all four sides. Dell says that the interior frame is reinforced with a magnesium alloy.

This laptop is available in two whimsically named colour options, Jingled Gold and Theoretical Grey, but both have conventional brushed metal finishes. The lid has a shiny Dell logo in the centre, but for some reason it's the thick pre-2016 version. We noticed that our review sample had picked up a few tiny dings and scratches, so we'd advise care when carrying this laptop around.

Flipping it open, we first see the narrow screen borders that Dell is very proud of. This does make the Dell Inspiron 15 7572 feel relatively modern, but that's only until our eyes hit the bottom of the screen. While the top and sides measure just about 5mm thick, the bottom is approximately 3.5cm. It's chunky enough to fit not only a large Dell logo but also the unfortunately displaced webcam.

The keyboard deck on the Dell Inspiron 15 7572 is a wide swathe of grey plastic with a rubberised finish. For a 15-inch laptop, it's surprising that there's no numeric keypad, speaker grilles, or anything to break up the blank surface. We're also a bit wary of palm impressions as this kind of finish tends to get discoloured and rub off over time.

The keyboard layout is pretty basic with compressed arrow keys and Fn-key shortcuts for paging, media playback, and system-wide controls. You get white backlighting with two levels of intensity. We liked the keyboard, and we found typing relatively easy thanks to the decent travel and springiness of the keys. The trackpad is also fine though the mechanism could have been firmer. 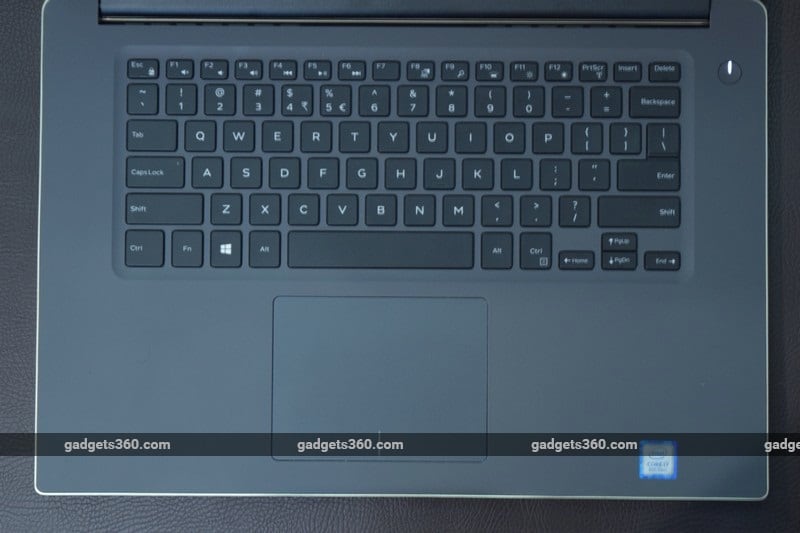 The biggest problem we faced is that the edges of the metal shell around the lower half of this laptop constantly pressed into our skin. We couldn't really rest our wrists while typing, and if we did, we ended up with scratches and indentations on our forearms. Considering that the lid has bevelled edges, this is a strange issue that could easily have been avoided.

The Dell Inspiron 15 7572 has a power inlet, a collapsible an Ethernet port, an HDMI port, two USB 3.0 ports, and a 3.5mm combo audio socket on the left of this laptop. On the right, you'll find a USB 2.0 port, SD card slot, and security lock slot. One of those USB 3.0 ports will let you charge a device even when the laptop is off, but the absence of USB Type-C is surprising. A white LED on the lower front lip tells you when the laptop is charging.

We found that we couldn't lift the lid of this laptop with a single hand. The hinge is so stiff that you need to hold the base down while opening it. On the bright side, that means there's very little wobble while typing. The keyboard deck also doesn't flex at all. The lid is slightly susceptible to bending but we were happy to see that there was no warping on the screen which means it is well protected.

Overall, the Dell Inspiron 15 7572 is a mixed bag in terms of design. It doesn't feel like a premium laptop on close inspection and there are some annoying ergonomic flaws, but the construction quality is good. 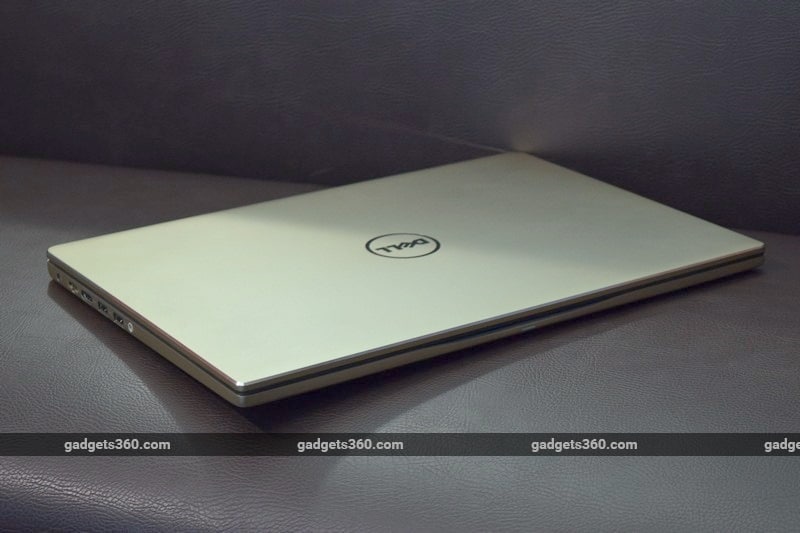 There is only one configuration for the Inspiron 15 7572 listed on Dell India's website, priced at Rs. 66,068 after factoring in offers and taxes, and based on a quad-core Intel Core i5-8250U processor. Our review unit however has a Core i7-8550U CPU, which is from the same 8th Gen Kaby Lake Refresh family. It costs a lot more, and is only sold through e-commerce websites. Whichever one you choose, you'll also get a discrete Nvidia GeForce MX150 GPU in addition to the CPU's integrated Intel UHD Graphics 620 capabilities.

The Dell Inspiron 15 7572 has 8GB of RAM and a 128GB SATA SSD as well as a 1TB spinning hard drive. Only about 104GB is available on the SSD due to Dell's hidden partitions for Windows recovery and support software. The battery has a 42WHr capacity and a 65W charger is included. For connectivity, there's dual-band Wi-Fi 802.11ac and Bluetooth 4.1.

The 15.6-inch IPS screen has a full-HD resolution. We found it crisp and bright, but it's also highly reflective, which sometimes led to us struggling to find an angle that would work under overhead lighting. The webcam can take photos and videos at up to 1280x720 pixels.

Dell ships the Inspiron 15 7572 with Windows 10 Home. If you're buying the version on its website, there are some offers buried deep down on the checkout page. You can choose to swap the 30-day Microsoft Office trial for a fully licensed copy of Office Home and Student 2019 worth Rs. 5,990 completely free, and you can get a 36-month subscription to McAfee Multi-Device Security for Rs. 289.

These are both great offers that we wouldn't get with the Core i7 version bought from elsewhere. Unfortunately McAfee tends to display large pop-ups on screen. Dell ships its own software too, including a driver update tool and a pointless battery level indicator. SupportAssist lets you run a diagnostic scan and check basic tech support FAQs. Dell Customer Connect only lets you write a product review. Digital Delivery is an interesting tool — if you added software to your shopping cart when buying this laptop, it won't be preinstalled. You can download it and set it up using this tool. 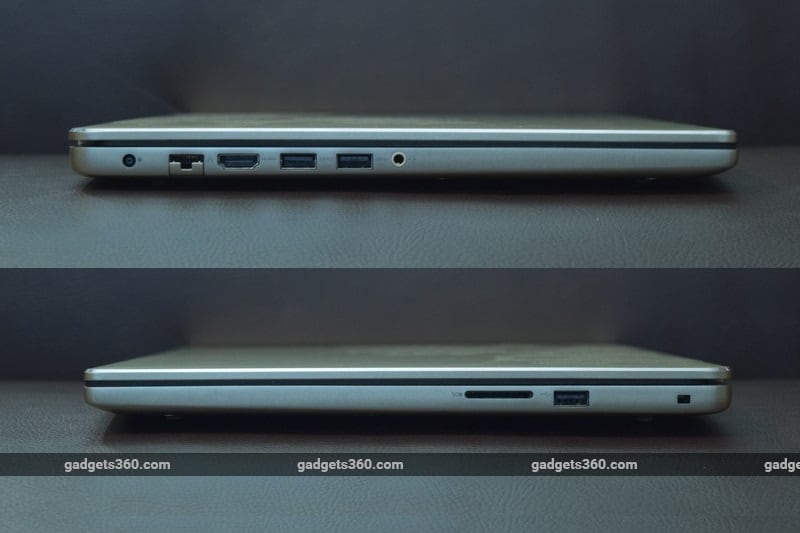 Everyday activities such as working with documents, streaming music and video, and browsing the Web with a few dozen tabs open didn't pose any problem at all for the Dell Inspiron 15 7572. You should be able to get some light creative work done as well, including photo editing and digital content creation. We would have liked a larger SSD with space for all our apps and files, but what's on offer isn't too bad.

We found the screen on the Dell Inspiron 15 7572 to be good for watching full-HD content on. It's large and crisp, with reasonably good colour reproduction. The speakers are unfortunately not great, and our music and videos sounded hollow and tinny. The webcam is pretty low-quality and we needed light shining directly on our faces for it to pick up any detail. Its positioning and angle required us to push the screen back really far to capture anything above our necks.

Benchmark tests give us an idea of performance in routine tasks that can be replicated easily. PCMark 10's Extended test gave us a score of 2,928. The brand new Cinebench R20 stressed the CPU and returned scores of 393 in the single-core test and 1,364 in the multi-core test. POV-Ray's built-in render test ran in 3 minutes, 27 seconds.

As for real-world workloads, we compressed a 3.24GB folder full of assorted files using 7Zip running  on the Dell Inspiron 15 7572 and it took 4 minutes, 56 seconds. We then transcoded a 1.3GB AVI file to H.265 with Handbrake, and that completed in 2 minutes, 10 seconds. The Blender 3D rendering benchmark unfortunately failed to run to completion.

We tried some graphics benchmarks and a bit of gaming on the Dell Inspiron 15 7572, and the GeForce MX150 GPU showed its limitations. 3DMark's Fire Strike Ultra test gave us a score of 705, and Unigine Valley ran at just 20.5fps at 1920x1080 at the Medium quality setting. Rise of the Tomb Raider is a relatively recent game that doesn't require cutting-edge hardware, but it still didn't run well on this laptop's bare-basic GPU. We used the Low quality preset with AA disabled at 1920x1080 and got an average of 22.77fps. Don't expect to be able to play modern 3D games at all.

We could hear the Inspiron 15 7572's fans spin up when we were playing games or running heavy tests. The keyboard got a bit warm but the wrist rest was fine. You probably wouldn't want to use this laptop on your lap for long, though.

Our intensive Battery Eater Pro benchmark ran for 2 hours, 14 minutes on the Dell Inspiron 15 7572, which is not bad. You should be able to get through a 6-to-7-hour workday on a single charge, but we wouldn't want to leave the power adapter at home. 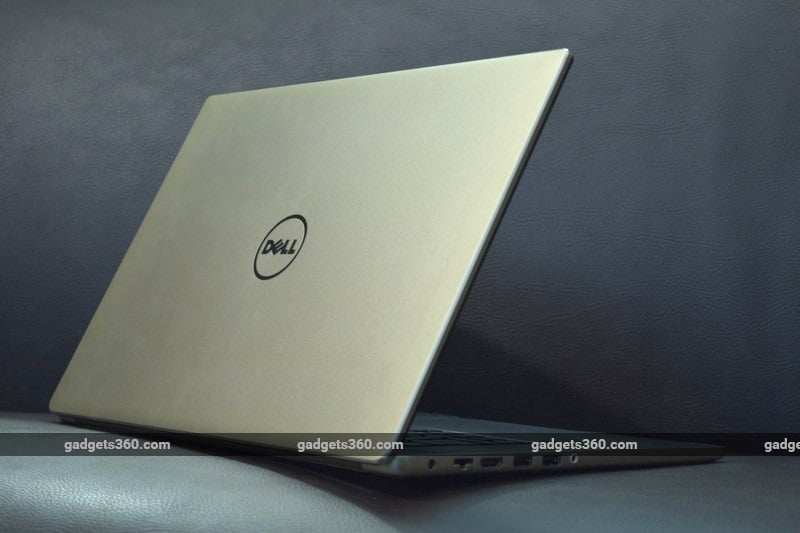 Verdict
At the end of this review, we have mixed feelings about the Dell Inspiron 15 7572. It offers a lot of good features and decent specifications, and it's quite portable for a 15-inch laptop. It runs well and should be fine for home users. However, there are some truly unfortunate design decisions including sharp metal edges and a practically useless webcam. We can't understand how these things made it through even a prototyping phase in Dell's studios. Despite being slotted into the higher-tier Inspiron 7000 series, this laptop just looks drab.

We often advise buyers not to just go by specs and prices, but to try laptops for themselves at a retail location whenever possible. This way, you can test the ergonomics of keyboards and trackpads, and get a feeling of design and construction quality in general. That would be a very good idea when considering the Dell Inspiron 15 7572.

The Core i5 version of this laptop has a far more reasonable price, and you can get some decent offers from Dell's website. However, for just shy of Rs. 1,00,000 there are better options including gaming and ultra-portable models. If you don't need a big screen, Dell's own XPS line has several options worth considering.