Not content with one surprise launch at its Computex 2018 ROG event, Asus on Tuesday whipped out a second show-stopper at its main press conference. This is a company that has taken great pleasure in surprising people with products that are imaginative and often defy categorisation, and no effort seems to have been spared this year. We now have the new ZenBook Pro UX580 and 480 with their attention-grabbing ScreenPad trackpads, in addition to yesterday's unveiling of the ROG Phone.

At first glance, the new ZenBook Pro models might seem like perfectly ordinary upgrades to last year's models. They're slim, have the latest hardware from Intel, and have a few nice touches such as narrow screen borders and high-speed Thunderbolt 3 ports. However, there's a new feature that no one else has implemented before, and it's sure to surprise many people. Whether anyone actually needs such a feature is another matter entirely.

The ScreenPad is a 5.5-inch full-HD IPS touchscreen in place of the usual trackpad. It works as a trackpad for Windows 10, and if it's set to Traditonal Trackpad mode, you wouldn't know the difference at all. That all changes when you hit F6 on the keyboard, which lets you cycle between all available options. You can use it as a secondary monitor in Extension Display mode (sic), and Windows treats it just like any external display, except that it's positioned below the main one instead of to either side. Alternatively, you can run mini apps on it in ScreenPad mode, very much like the desktop gadgets that were once popular with Windows. 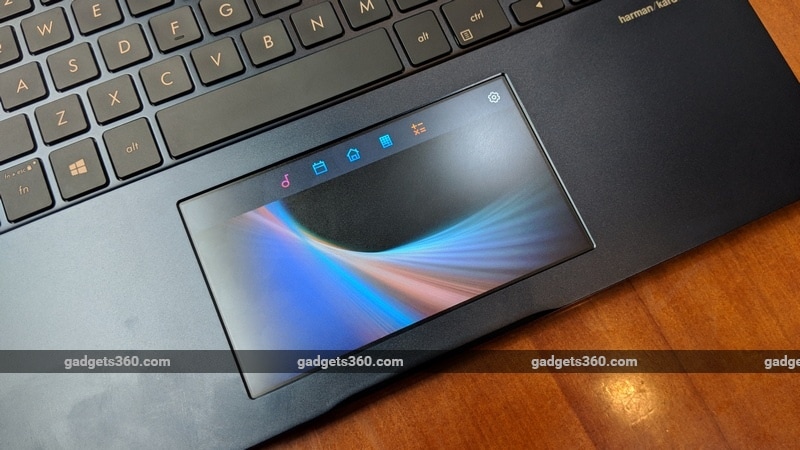 You can set the ScreenPad to act as a standard trackpad but still display a photo of your choice - just right-click on an image file in Windows Explorer and select Set as ScreenPad Background. Asus is promoting various app integrations and browser extensions - for example, you can already control YouTube video playback or manipulate objects in some Microsoft Office programs. An SDK will soon be released, so anyone can develop apps for the ScreenPad, and they'll be distributed through the Windows Store or Asus' own Giftbox store that's preloaded on all its laptops.

We were able to spend some time with the new ZenBook Pro models in Taipei prior to its official unveiling, and while we're impressed with the concept overall, we encountered some curious behaviour. Some of this could be attributed to immature software, but we're also left with bigger questions about the overall usability of such a device.

The biggest challenge is that while this is a touchscreen, you cannot directly manipulate Windows programs that you drag onto it, because it's still working as a trackpad for both displays. You have to essentially use it like a trackpad and slide a finger around to position a cursor over screen elements, rather than tapping them directly, and the cursor might have to be dragged down from the main screen. It's counterintuitive now that we're all used to smartphones. It can be disconcerting when one program is on the ScreenPad but you're tapping and swiping over it to control the cursor on the main laptop screen.

Secondly, there's the way that Windows handles multiple monitors. If you want a video playing on the ScreenPad, you have to drag its window down, and then make it play fullscreen. You'll also have to deal with very tiny Windows UI elements, and the gap between the two screens, which means that window controls could be hidden. Dragging vertically in one swipe is also a challenge, because the trackpad is wide, not tall. We once saw Windows scaling on the main screen go haywire when switching out of Extension Display mode. It would perhaps have been simpler for people if video could be cast to the ScreenPad rather than implementing it as a second monitor.

When running ScreenPad apps, you can manipulate them directly, like on a smartphone. This means that trackpad functionality is disabled, and you have to remember that. If you need to multitask, you'll have to tap around to quit the app in order to liberate the trackpad. We tried playing some music using a ScreenPad app and found that it kept on playing with no way to control it when the app was closed. When we switched to a different mode, it took way too long to switch back in order to just pause the music. 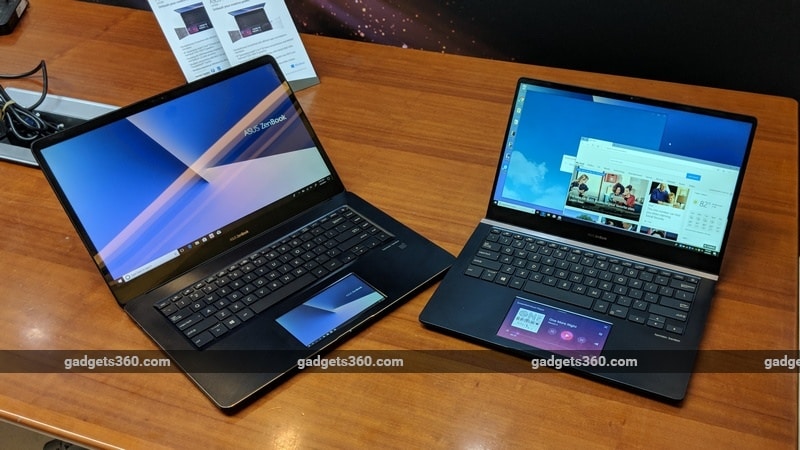 Clearly, as dazzling as the ScreenPad might look at first, there are teething troubles on the conceptual level. Asus cleverly says that it is "raising the bar", but while Apple's Touch Bar has relatively less functionality, it's much more tightly focused and there's way less potential for frustration and confusion.

All that aside, there are things to address on the hardware and design fronts. The ZenBook Pro UX580 and UX480 aren't just two different size options; they have completely different designs. Both are available in the same Deep Dive Blue colour with Rose Gold trim, and just like last year, we would really like to have a neutral colour option. The 14-inch UX480 has en "ergolift hinge" which inclines the lower half slightly when opened, while the 15-inch UX580 is a simple clamshell. The larger model gets up to a six-core Intel Core i9 CPU, and a super-accurate Pantone-validated 4K screen, while the smaller one tops out with a Core i7 and full-HD screen.

The bigger model also has two Thunderbolt 3 ports to let you connect up to three external monitors (plus the ScreenPad makes for five in total!) while you only get 10Gbps USB 3.1 Type-C with the smaller one. However, in an interesting twist, the UX480 has an infrared camera for Windows Hello authentication, but the more premium UX580 only has a fingerprint sensor.

Asus knows that it will grab headlines and eyeballs with the ScreenPad, but we fear that real-world use will prove to be a bit complicated. A secondary Users will especially struggle with when to use it like a touchscreen as opposed to a trackpad. A lot will also depend on software makers, and wide support is not guaranteed, considering that this isn't an industry standard. We'll have much more detail when we get to use and live with the new ZenBook Pro models over a longer period of time. If and when Asus launches them in India, we'll have a full, detailed review.

product The new Asus ZenBook Pro laptops mean serious business but also have a quirky side, with their multi-purpose touchscreen trackpads.