These two new productivity-oriented laptops give users the benefits of having a second monitor.

It's traditional for Asus to whip out a showstopper every Computex, usually as the grand finale to several dozen other product launches. We've seen some odd and wildly impractical ideas, such as the Zenbo robot, Padfone, and Transformer Book V, as well as some practical but ultra-niche products that actually influence the market and show us what the future has in store. For example, the dual-screen Tai Chi laptop was a precursor to today's 2-in-1s, and last year's ROG Phone is not only a commercial product worldwide, but it was also received well by critics. We think that this year's ZenBook Pro Duo and ZenBook Duo could well fall into the latter category.

Having extra screen space makes perfect sense for productivity, which is the market that Asus is targeting. Anyone who has used multiple monitors with a PC can testify to how much of a difference it makes to be able to have multiple documents open simultaneously or have source material stay visible while working on a project alongside.

By putting a second screen right below the primary screens of these two laptops, Asus has given people a lot more space with which to get work done. At its launch event, the company outlined not only professional scenarios such as video editing and music production, but also simple everyday tasks such as booking a hotel while being able to keep a map and calendar handy. 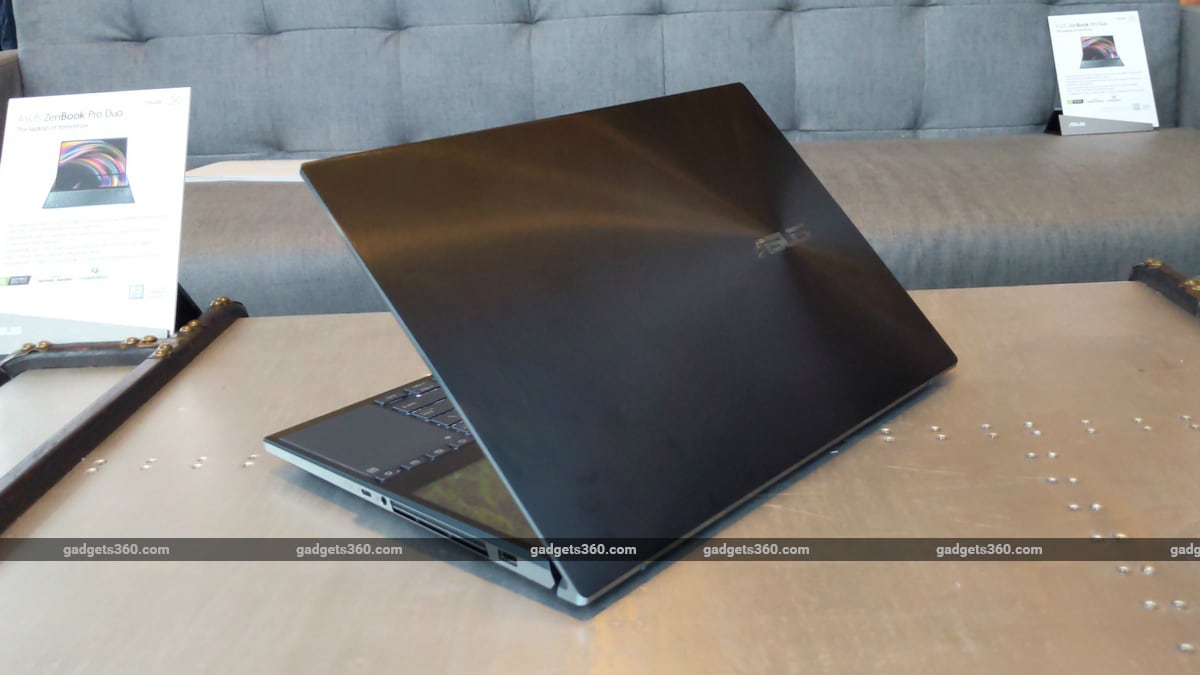 The placement of what Asus is calling its ScreenPad+ does involve a few ergonomic compromises with regard to their keyboards and trackpads, but there's no denying that every little bit of surface area on the insides of these laptops has been used. Left-handed users are also out of luck, with both models moving their trackpads to the right.

We found ourselves hunching a little more than usual when trying to use the ZenBook Pro Duo and ZenBook Duo on a table, but you won't have to worry about carrying around another device, keeping it charged, and setting it up each time it's needed.

We struggled with the first-gen ScreenPad on last year's ZenBook Pro UX580GE when we used it, because of the mismatch in size and purpose between a trackpad-sized display and an actual secondary monitor. Asus had tried to give the ScreenPad too many functions. Many of those scenarios are resolved with the ScreenPad+ which does not double as a trackpad and stretches the same width as the primary display, with the same horizontal resolution.

Usage could be a little confusing, but Asus has done well with a Windows UI extension that shows up when you're dragging a window anywhere, letting you instantly snap it to either monitor. There are also hints on the ScreenPad that appear to let you easily dock two or three windows side by side, like handy widgets. Another neat management tool lets you define sets of windows that you want to use together, and with two taps, you can launch all of them simultaneously and have them snap into your preferred positions.

The possibilities are of course endless, and Asus is thinking of the ScreenPad+ as a control surface as well as a secondary display. We hope to see software vendors, especially in the professional space, take this idea and run with it to create truly useful new user interfaces.

The ScreenPad+ displays on both the ZenBook Pro Duo and ZenBook Duo have anti-glare coatings so that reflections from both screens don't interfere with each other.

They will of course affect battery life – Asus pitches the smaller 14-inch ZenBook Duo as a portable machine so the company has disclosed battery life figures of around 8 hours with the ScreenPad+ enabled and 10 hours without it. The larger ZenBook Pro Duo with its discrete GPU and high-end CPU options is more desk-bound so battery life impact is less of a concern to the company.

Beyond their defining feature, these two laptops are pretty impressive machines. The ZenBook Pro Duo and ZenBook Duo both look and feel very high-end and professional, and seemed to be built quite well. They both have a reasonable number and variety of ports. The ErgoLift hinges are designed to improve airflow and comfort by angling the base of each laptop upwards as its hinge is opened. 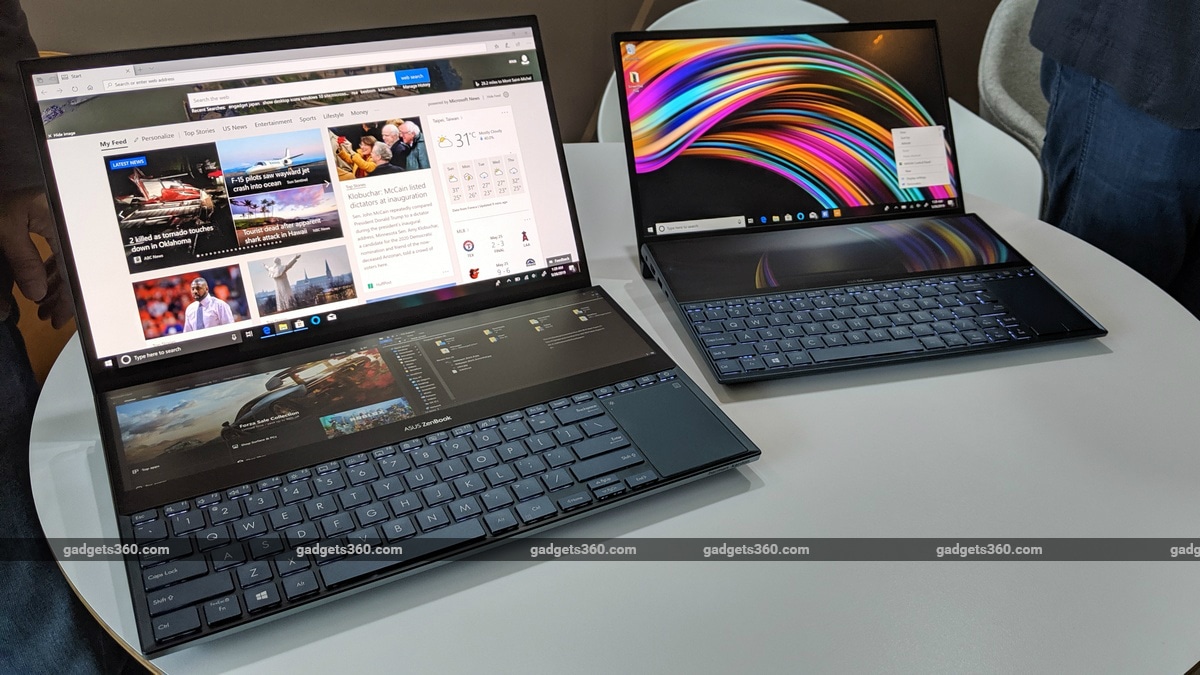 Both models have vibrant screens with narrow borders. Their keyboards are good enough for casual use even though they will take some time getting used to. The larger ZenBook Pro Duo will ship with a plastic wrist rest which unfortunately does not attach to the device and can slide around freely.

Although we couldn't try this for ourselves at the launch, both models support pen and touch input on their ScreenPad+ displays, and writing or sketching will be a lot more comfortable on the flat secondary screens than on a normal laptop screen.

They also look great from the back, with a new off-centre take on the traditional brushed concentric circle pattern that ZenBook laptops have.

Of the two models, the ZenBook Pro Duo is obviously the more powerful, but we're more intrigued by the smaller ZenBook Duo which is far more portable. A 14-inch laptop weighing no more than the average Ultrabook could open up some very interesting possibilities for use while on the go. We wonder why no other company has tried to do this before.

Even if these first-gen products aren't very affordable, we can expect Asus to continue offering the ScreenPad+ as a feature on more models in the coming years, bringing it to lower price points the same way that the original ScreenPad concept has now been improved and will be offered on more models.

The ZenBook Pro Duo and ZenBook Duo will be making their way to India before the end of this year, possibly in time for the Diwali shopping season. Asus hasn't committed to any pricing for India yet, saying that the specifications and variants might not be the same in all countries.

Disclosure: Asus sponsored the correspondent's flights and hotel for the Computex in Taipei.

Fortnite Finally Available for Download on Xbox One in India
Samsung May Benefit From Huawei's Plight in Ongoing Trade War, Fitch Ratings Says

product These two new productivity-oriented laptops give users the benefits of having a second monitor.