Thin and light laptops that also offer good processing power have in the past, been quite expensive. However, this scenario is slowly changing with a new breed of laptops in 2018. Intel’s new 8th Gen Core CPUs are partly responsible for this change, as for the first time, low-voltage mobile parts aren’t restricted to two CPU cores anymore. Now, even lower-end devices benefit from a considerable boost in performance.

Asus’s new VivoBook S14 has been designed keeping portability in mind. There are two series: the offline-only VivoBook S14 (S406U) models are slightly lighter and slimmer, and only have SSDs for storage. The VivoBook S14 (S410UA) models are exclusive to Flipkart and have hard drives in addition to SSDs, but are slightly thicker and heavier. The other specifications are basically identical, except for a few little things that we'll point out. We have an S406U variant with us for review. It's slim and light, and looks quite nice, especially in the all-gold trim that we have.

One obvious competitor that comes to mind is the Acer Swift 5, another slim laptop that tips the scales at a mere 970g. However, Asus is banking on pricing to make the VivoBook more appealing. Has it succeeded? Let’s find out.

The VivoBook S14 is stylish, and we think its design will work for both professional and casual use. It’s available in two colour options, so you can choose whether you want to go for a flashy gold or understated grey look. The lid is said to be scratch-resistant with a ‘spun-metal’ finish. Asus has been using this treatment for its high end ZenBook series for a long time, but you get vertical lines on the VivoBook instead of the trademark concentric circles. The lid does offer very good protection for the display, and we didn’t see any warping when applying pressure.

The hinge extends about 120 degrees backwards, which we found comfortable enough for typical usage positions. However, the hinge doesn’t have very good torsion, causing the display to wobble easily. This could be a problem when using the laptop in a moving vehicle.

There’s no touchscreen but you do get a full-HD resolution IPS panel with an anti-glare finish. This negates issues with reflections indoors, and we found the brightness to be quite adequate, even when using it under sunlight. We also like the slim borders on the sides of the display. Asus has managed to fit a 14-inch panel in a chassis typically designed for 13-inch ones. 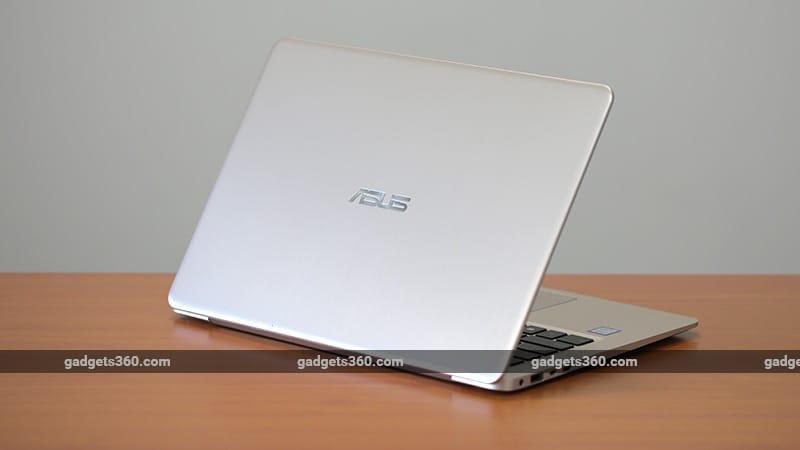 The base of the laptop features hard lines but with smoothened edges so usage isn't uncomfortable. You get multiple levels of backlighting for the chiclet keys, which are well spaced and sized. They also have a 1.4mm of travel, which typically should be comfortable. However, there’s a lot of flex when you type, which makes the keys unnecessarily noisy. In fact, even the palm rest area flexes when you apply slight pressure, due to the plastic body. The trackpad is wide and there’s a fingerprint sensor in the the corner for user authentication. Tracking performance is alright but not great, as is the case with most mainstream Windows laptops.

The sides of the laptop are fairly thin at 18.8mm, which is just enough room for full-sized USB ports. You get two of these (one USB 2.0 on the right and one USB 3.0 on the left) and a single Type-C port, which is of the USB 3.1 (Gen1) standard. There’s a Micro-HDMI video output instead of a full-sized one for some reason, plus a microphone and headphones combo port. There's a microSD card slot which is good for expanding the internal storage. It might come in handy if you pick up the model we’re reviewing, which only has a 256GB SSD. The slightly thicker VivoBook S14 (S410UA) models have a SD card slot and an HDMI port as well, both full-sized.

The VivoBook S14 is available with multiple CPU and storage options, but the thing that remains constant is 8GB of RAM. There are three main models in India with a Core i3-7100U, Core i5-8250U, or Core-i7 8550U CPU. Note that the Core i3 is a 7th Gen model, and so there will be a significant difference between that and the 8th Gen Core i5 model in terms of performance.

All models that are listed on Flipkart at the moment feature an SSD (either 128GB or 256GB) as well as a 1TB mechanical hard drive. The unit that Asus sent us for review (S406U) is only available offline and is slightly different, with a Core i5-8250U and a 256GB SSD but no hard drive. 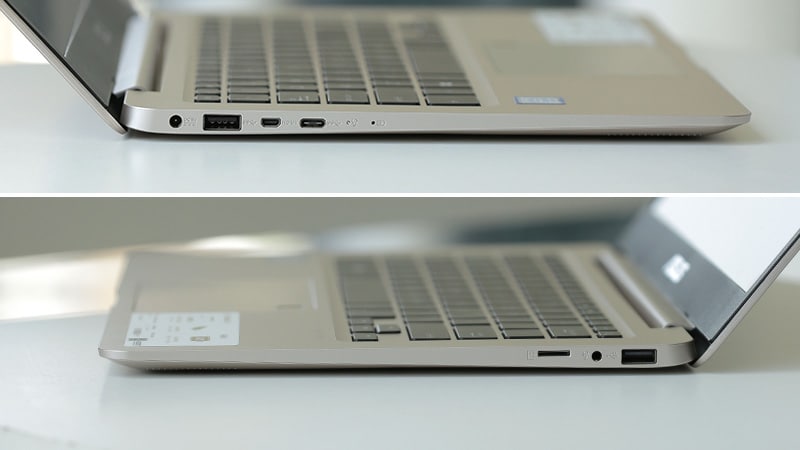 Other features that are common across the SKUs include an HD-resolution webcam, Wi-Fi 802.11 b/g/n/ac, Bluetooth 4.0, stereo speakers tuned by Harman Kardon, and a total weight of around 1.4kg. You’re limited to integrated graphics, however in some countries such as the US, the VivoBook S14 is available with Nvidia’s entry-level GPUs. In the box, you get a protective sleeve and the charger.

The VivoBook S14 ships with Windows 10 Home. There’s a 30-day trial of McAfee LiveSafe, the full version of Microsoft’s Office suite, and the usual preloaded games and apps from the Windows Store. Asus has its own suite of programs installed too, for updating drivers and managing the health of the battery. Finally, you also get a full version of CyberLink’s PowerDirector 14 video editing program.

The VivoBook S14 had no trouble taking on our usual everyday workloads. Booting is quick and the SATA SSD actually delivered results comparable to those of some devices with PCIe SSDs that we've tested recently, such as the Microsoft Surface Pro. The display has good viewing angles, and colours are vibrant and punchy. There isn't too much jaggedness around text, but the default Windows scaling makes everything look unnaturally big. We found 125 percent scaling to be ideal for a screen this size. The laptop runs cool most of the time, and we only heard the fans ramp up when playing heavy 3D games and running benchmarks. The palmrest also doesn’t get uncomfortably hot, which is good. 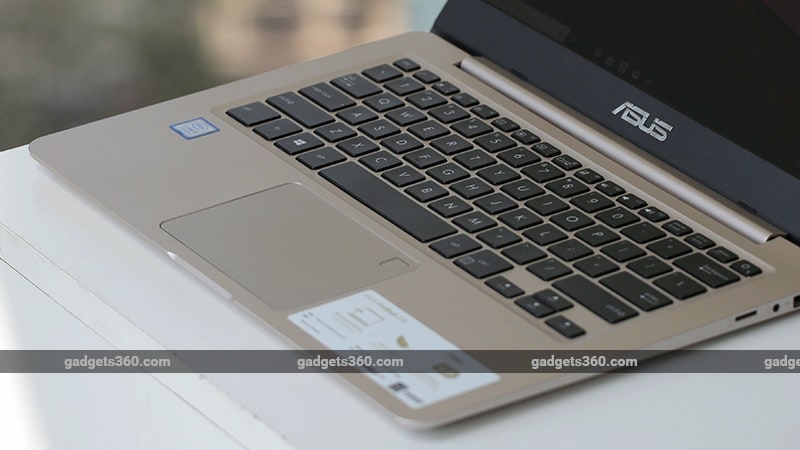 Audio performance is not too shabby either. The stereo speakers are placed on the bottom, and have a warm sonic signature. There isn’t too much bass, but vocals and highs sound crisp. Videos look good too, thanks to the IPS panel.

We got some good benchmark numbers thanks to the 8th generation CPU. We got 3,536 points in PCMark 10, and content creation tests didn’t take too long to finish either. Encoding our test video file in Handbrake took about 1 minute and 51 seconds, which is only slightly behind what the Lenovo Yoga 920 managed with a 8th Gen Core i7 CPU. Predictably, gaming performance wasn't great and we got single-digit framerates in most of our tests. Casual games from the Windows Store won't be much of an issue though.

Battery life is slightly better than what the Acer Swift 5 delivered. We didn’t get a great score with the stressful Battery Eater Pro, which only ran for 1 hour, 47 minutes. However, if you do most of your work within a Web browser, you should be able to go for about six to six and a half hours continuously. This means you could just about able to squeeze in an entire workday on a single charge.

Verdict
Asus has managed a pretty aggressive range of prices for the VivoBook S14 series. This has come at some cost to the build quality, but overall, it’s not a bad package. The S406U variant that we reviewed is priced at Rs. 54,990 and is only available offline. You also have the choice of the Flipkart-exclusive S410UA version priced at Rs. 59,990 with the same processor and specs, except for a 128GB SSD and a 1TB hard drive in place of the 256GB SSD, the full-sized ports and slots, and the increased thickness and weight. Looking it at it purely in terms of specifications, the VivoBook S14 offers better value than the Acer Swift 5 at this price.

The Swift 5 is still recommended if you’re in the pursuit of ultimate portability. Another alternative could be the Apple MacBook Air, which doesn't have as up-to-date specifications and isn't as light, but has a much sturdier body.