The most affordable Asus ROG Zephyrus model doesn't have all the features that its siblings do, but still packs a punch

The Asus ROG Zephyrus G GA502DU aims to be slim, light, and affordable

It wasn't long ago that we reviewed the Asus ROG Zephyrus M GU502GU gaming laptop, which is an ambitious attempt to cram a lot of power and features into a slim body. That model is not without its flaws, but offers decent performance and is versatile and portable enough to work well for more than just gaming. Today, we have with us a sister model, the new Asus ROG Zephyrus G GA502DU. The Zephyrus G series is positioned below the Zephyrus M series and is supposed to serve as a more affordable option, but the two still have a lot in common.

In fact we were surprised by just how similar these two models are, given the clear difference in their prices and positioning. Rather than focusing on design, Asus has saved its biggest changes for the insides – the more affordable Zephyrus G GA502 uses an AMD Ryzen processor rather than the Intel Core series found in most laptops today. This is a big change, and it should make this new laptop interesting to review.

Priced at Rs. 99,990 in India, this model comes in at almost exactly two-thirds the price of its more premium sibling. So which of these two models should you choose, and do you give up a lot of performance if you go for the more affordable one? We've got the answers for you. 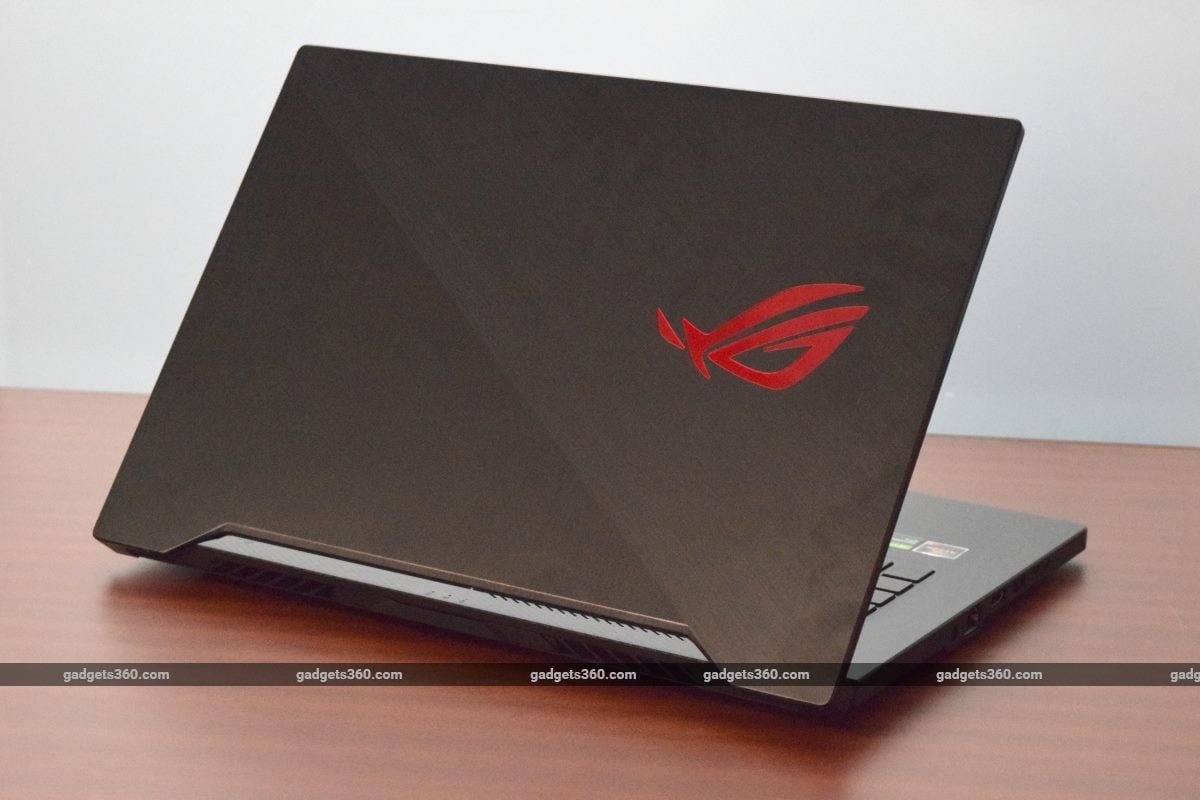 Just like its sibling, the Asus ROG Zephyrus G GA502DU is slick and modern-looking. It's just under 2cm thick and doesn't feel cheaper or in any way less premium than the Zephyrus M GU502GU. However, it weighs a little bit more, at 2.1kg compared to 1.9kg.

The lid is made of dark brushed metal and there's a subtle crease running diagonally across it. The brushed grain runs in different directions on either side of the crease, but you'd have to look closely to notice this. Of course there's an illuminated red ROG logo on the lid as well.

The lid has a cutout at the back which allows the status LEDs above the keyboard to be visible when the laptop is closed. This means that the rear is uneven in thickness, which we felt made carrying this laptop a little awkward.

Asus has designed this model with completely flat sides for a simple, monolithic look. There are plenty of air vents on the rear, bottom, right, and even above the keyboard. Predictably for a laptop this thin, there's no easy access to the upgradeable components, but the entire bottom panel can be unscrewed. 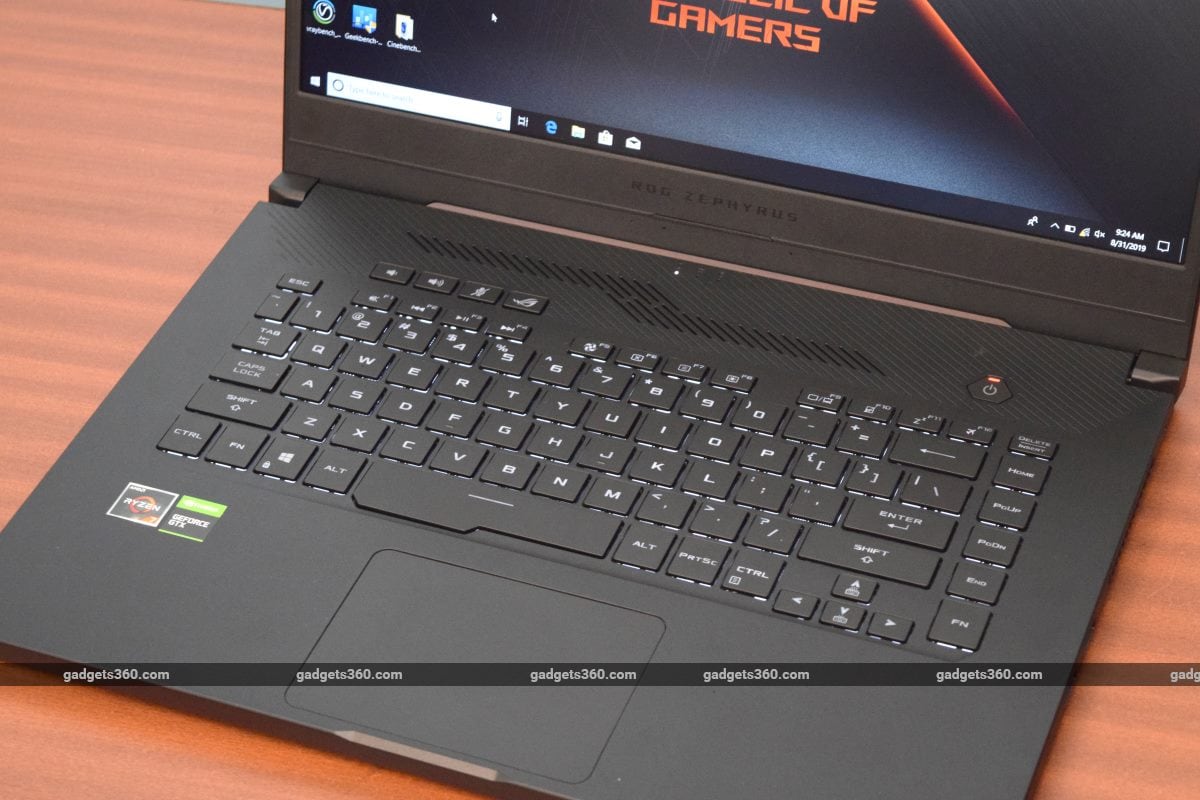 The 15.6-inch screen has pretty slim borders on the top and sides, but this has come at the cost of a webcam. Asus decided to simply get rid of this feature rather than try to design a suitable housing or reposition it, and we have mixed feelings about this. A poorly positioned webcam would have been nearly useless anyway, but you'll have to buy one of your own if you want to video chat or record anything.

The dotted texture above the keyboard that we didn't like on the Zephyrus M has been replaced with a grooved one which will be much easier to clean. There are also vents here, unlike on the more premium model. They keyboard layout is identical, but it has simple white backlighting with three brightness levels rather than RGB colour effects. The trackpad is still centred to the laptop's body rather than the keyboard, which means it gets in the way while typing.

Overall construction quality seems quite good, and we didn't feel that any part of this laptop is flimsy. The lid flexes a bit, but this doesn't cause any warping on screen. While the hinge is firm, we would have liked to be able to tilt the screen farther back. The 180W power brick is a bit big, but not too heavy. 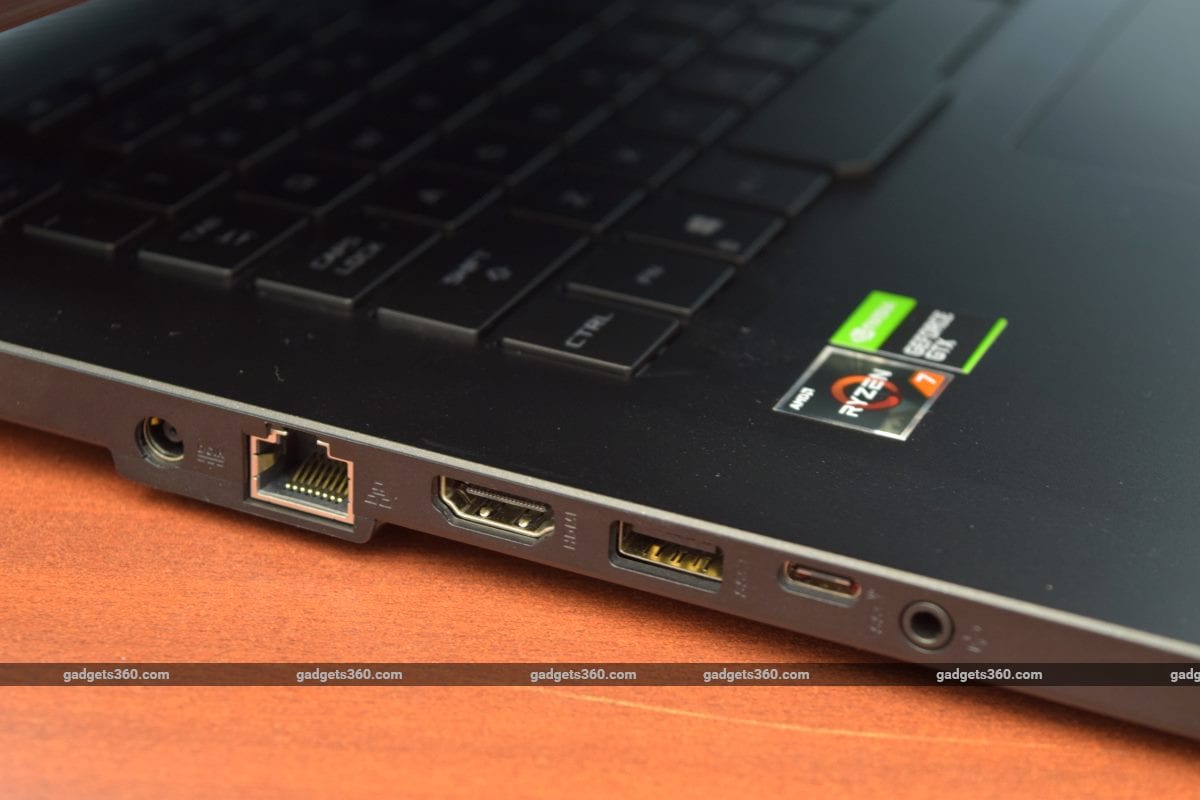 The main attraction for the ROG Zephyrus G GA502DU is the AMD Ryzen 7 3750H processor, which is a quad-core model with simultaneous multithreading and runs at a base speed of 2.3GHz with a boost speed of 4GHz. It's most important to note that despite its 3000-series model number, this CPU is not based on the new Zen 2 architecture like desktop Ryzen 3000-series chips. Instead, it uses last year's Zen+ design and also features integrated Radeon Vega graphics.

Along with this is an Nvidia GeForce GTX 1660 Ti GPU with Max-Q optimisation. This is one of Nvidia's latest laptop GPU models, but it doesn't support ray tracing effects like the RTX series does. Asus has configured this laptop with 16GB of DDR4 RAM, of which 8GB is soldered and the other 8GB is a standard removable module. There's also a 512GB PCIe SSD, and a 76Wh battery.

The screen measures 15.6 inches diagonally and has a 1920x1080 resolution. As an unexpected bonus, it also has a 120Hz refresh rate. The screen thankfully isn't glossy, which means reflections indoors are not a problem.

There's also Wi-Fi 802.11ac, Bluetooth 5, dual microphones, and stereo 1W speakers. We would have liked an SD card slot in addition to the rest of the connectivity that we have. Charging through the USB Type-C Port is not supported, unlike on the Zephyrus M.

The operating system is Windows 10 Home. Asus has preinstalled a 30-day demo of McAfee LiveSafe, which constantly bombarded us with huge popups asking us to pay for a subscription. There's also Asus' own MyAsus app for general device information and troubleshooting, as well as the Armory Crate utility which has some overlapping functionality but is more focused on gaming-related tweaks. 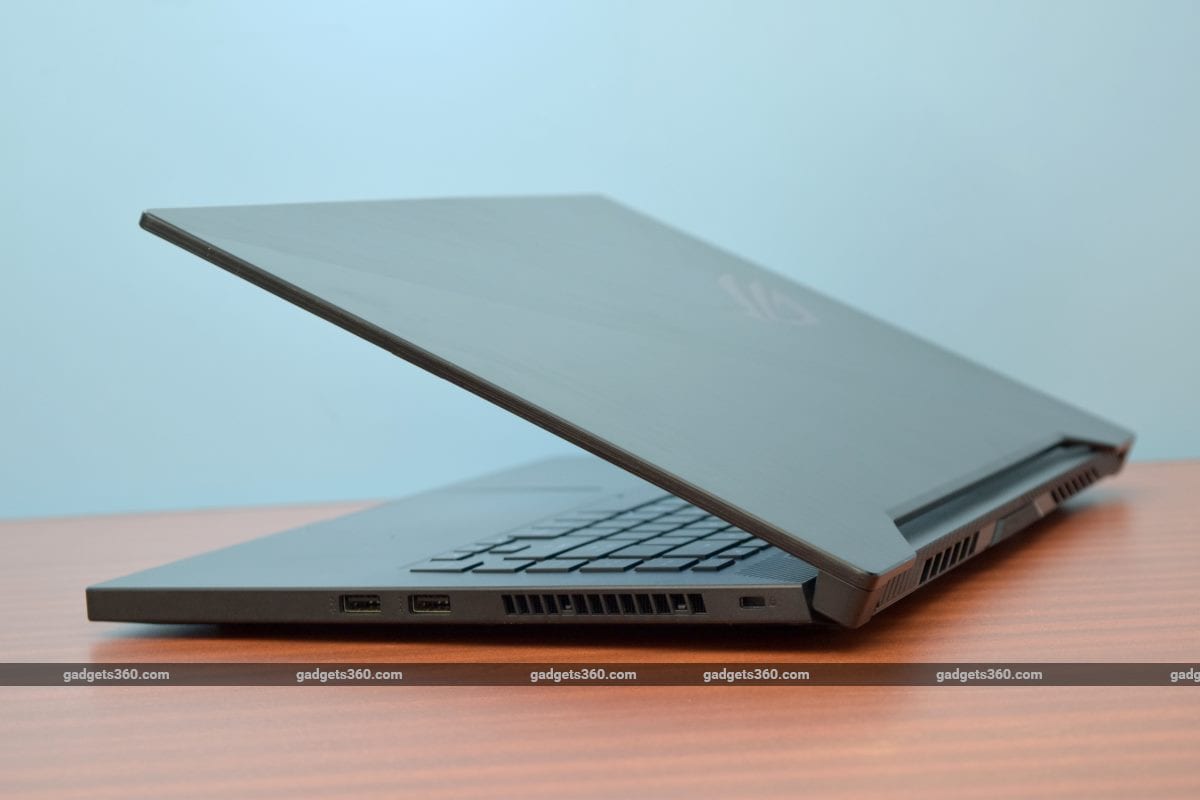 Asus has designed this laptop primarily for gamers but it should fit in anywhere you take it, from a classroom to an office. We first decided to see how it performs when subjected to ordinary everyday tasks. The first thing we noticed was a faint but annoying high-pitched whine which could be due to the fans, and could also be specific to our unit. This wasn't constant, but we heard it now and then.

The display runs at 120Hz no matter whether you're running on battery or mains power. This makes casual usage feel slightly smoother, including simple things like dragging and dropping items. Casual usage and office work went smoothly thanks to the non-reflective finish and decent quality of this panel. Colours aren't especially vivid and we noticed a slightly warm tinge, but this isn't really a problem when watching videos or playing games.

The right side of the keyboard did get warm as we were using this laptop, but the wrist rests stayed cool. Over time, and when more intense programs and tests were running, we noticed that the heat was becoming a little to much for our liking. At least when gaming, our right hands weren't on the keyboard, but that would have been very uncomfortable. The fans also get pretty loud when this laptop is heavily stressed.

Real-world tasks ran without any trouble and we were happy with overall performance. The keyboard keys are comfortable enough for typing, and the trackpad works perfectly well. The speakers surprised us with a wide, clean, crisp sound that worked great for voices and effects in games, but complex music tracks came out distorted at high volume.

Copying files from external storage was especially snappy thanks to the PCIe SSD, and we measured sequential reads and writes of 1428.5MBps and 972MBps respectively, with random reads and writes coming in at 340.7MBps and 692.1MBps. We were able to compress a 3.24GB folder of assorted files using 7zip in 4 minutes, 28 seconds, and we transcoded an AVI video to H.265 using Handbrake in 1 minute, 53 seconds.

As for synthetic benchmarks, PCMark 10's standard and Extended runs gave us scores of 3,653 and 4,632 respectively. POVRay completed its render benchmark in 4 minutes, 7 seconds, and the composite Blender benchmark completed in 46 minutes, 51 seconds. Cinebench R20 gave us 354 and 1,679 points in its single- and multi-core tests respectively. These scores are somewhat lower across the board than what we saw on the ROG Zephyrus M GU502GU.

Moving on to graphics, 3DMark's Time Spy test returned a score of 4,496 and Fire Strike Extreme gave us 5,664 points. We'll begin the game tests with Shadow of the Tomb Raider, a relatively recent title. At the High preset with TAA enabled, we saw an average frame rate of 59. The Nvidia GeForce GTX 1660 Ti GPU doesn't support ray tracing, so there's no performance penalty to measure.

Our next game benchmark is Far Cry 5, but it refused to run fullscreen on the ROG Zephyrus G GA502DU, and could not detect the screen's 120Hz refresh rate. As a result, scores were anomalous and can't be counted. Asus might have to update some drivers for this to work, which is frustrating.

Instead, we turned to Metro: Last Light Redux. This game's built-in benchmark gave us 91fps at its Medium quality setting at 1920x1080, with 4xAF enabled and SSAA turned off.

When manually playing through games including DOOM and The Witcher 3: Wild Hunt, we saw frame rates that were good enough to keep most people happy at high quality settings. DOOM gave us between 75fps and 90fps at the Ultra quality preset, while The Witcher 3 ran at 65-70fps with graphics and post-processing both set to High. Unfortunately with long game sessions, we found that fan noise became quite distracting and the area above the keyboard got blazing hot.

Battery life is decent for a slim, powerful laptop. We got about five and a half hours of casual usage out of a single charge, which included video streaming for about an hour, general Web surfing, and offline media playback. Battery Eater Pro ran for 2 hours, 22 minutes which is pretty commendable. 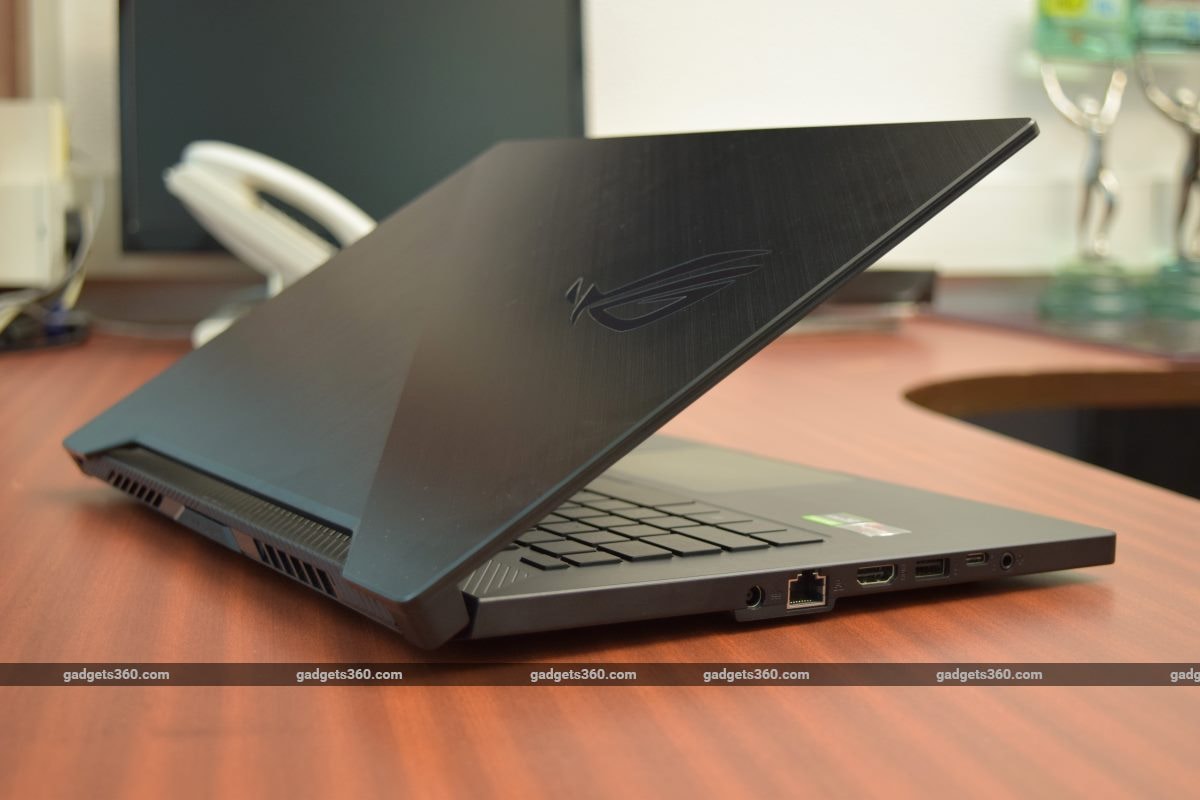 Gaming performance is good for the price, but heat is an issue

Asus has given us two choices at very different price points, but there's a lot that the ROG Zephyrus G GA502DU has in common with the Zephyrus M GU502GU. Of course the lower priced laptop lacks a few bells and whistles such as the RGB backlit keyboard and USB Type-C charging, but these are not things we would miss a lot. Even the 120Hz screen is not a huge step down from 144Hz.

The main differences are in terms of horsepower, which is to be expected considering the price. Both models have the same GPU (though with Max-Q thermal optimisation on the Zephyrus G) which means that Asus has made some big as well as some subtle cuts. The end result is the most affordable model in the slim Zephyrus line, and it's still more than capable of handling recent games at reasonable quality settings.

What we see in terms of real-world usage, benchmark scores and game performance, is much the same as what the Zephyrus M GU502GU delivered – a highly portable and versatile machine with solid gaming capabilities, but less-than-ideal thermal design leading to trouble with heat and noise.

We definitely can't overlook the lack of a webcam or SD card slot, and the poorly positioned trackpad either. If you can live with these things and like the Asus's current style, you now have a choice between the more affordable Zephyrus G over the mainstream Zephyrus M.