When we see a new generation in a company's numbering scheme, we expect that there's at least some justification behind it, but that isn't always the case. There are many reasons for companies to just slap a new label on an old product and ship it out - the publicity that surrounds a new launch, the illusion that buyers are getting something bigger or better, and the chance to steal a competitor's thunder at an opportune time.

It hasn't even been a full year since we reviewed the Radeon RX 480 GPU, as well as the RX 470 and RX 460 which followed it, but they have now been replaced by the Radeon RX 500 series. It shouldn't surprise us then that the new Radeon RX 500 series is just a mild refresh of the RX 400 series. It seems that AMD felt it was time to move up a generation - in terms of marketing, if not the actual underlying technology.

We have with us Asus' ROG Strix Radeon RX 580 8GB OC, which sells for Rs. 25,500. We're eager to see how the Radeon RX 580 GPU stacks up against last year's Radeon RX 480, and what exactly Asus's implementation adds to the mix.

We've established that there isn't anything different about the GPU's underlying architecture, but there have been some improvements to the manufacturing process over time that allow AMD to extract slightly more performance per chip than when the RX 480 first went into production. The company simply calls this its "latest generation" 14nm process.

There are still 2,304 programmable cores that AMD calls "stream processors" organised into 36 clusters for a total of 5.7 billion transistors. AMD has set a base frequency of 1257MHz and a boost ceiling of 1340MHz, up from 1120MHz and 1266MHz respectively on the RX 480. Of course, board partners such as Asus are free to tweak those speeds if they can compensate with adequate cooling.

The memory bus is also still 256 bits wide but the memory speed has gone up to 8Gbps for an effective bandwidth of 256GBps. Radeon RX 580 cards will be available with either 4GB or 8GB of GDDR5 RAM. What is very interesting is that the GPU's power draw has increased from 150W to 185W - a considerable amount, which doesn't really mesh with AMD's claim that improved power efficiency is the reason for the higher clock speeds. 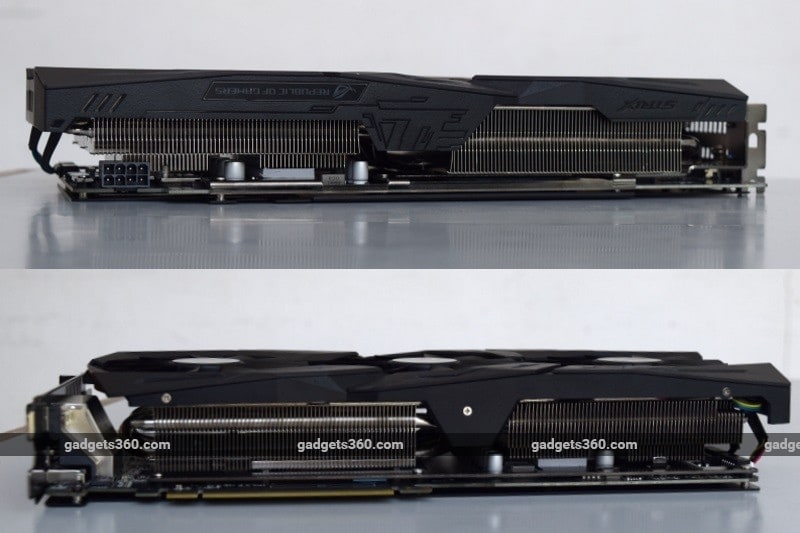 There is no RX 580 reference design like there was for the RX 480. AMD's partners are only selling cards with their own custom-designed coolers. Asus of course has a variety of models out, and the most elaborate of them is the ROG Strix Radeon RX 580 8GB OC. As its name suggests, this card has 8GB of RAM and higher clock speeds - a base of 1360MHz, with a miniscule bump up to 1380MHz in "OC mode".

This card is absolutely massive. It's much taller, wider and thicker than it needs to be, and the main reason for that seems to be that some people just like hardware that they can show off. Flagship-class graphics cards are almost always 10.5 inches long and occupy two motherboard slots, but this card is nearly 12 inches long and thick enough to block three. You'll need to make sure that your PC case can handle such a beast.

Asus justifies the card's size and premium pricing by saying that there's 40 percent more heatsink surface area than usual, resulting in better cooling. It has also used premium components all around, including the power regulators and a super-smooth precision-machined contact point that apparently helps pull heat away from the GPU.

Asus has gone with a grey colour for the fan shroud, with lots of sharply angled surfaces and claw-like cutouts for RGB LEDs. We've seen this design before, and it does look rather imposing. The LEDs light up in red by default though you can change this using Asus's Aura software, and sync patterns with an Asus Aura motherboard and peripherals. There's an illuminated "Republic of Gamers" label on the top of the shroud as well as an ROG logo on the backplate just in case another reminder was needed.

Three fans is probably overkill, but clearly Asus wasn't going for subtlety here. According to the company, the patented fan blade design delivers lower noise, better airflow, and increased lifespan. The fans don't spin unless they need to. Asus also provides headers so that you can have additional case fans triggered when the GPU temperature rises.

On the rear of the card, you'll find one DVI-D port, two DisplayPorts, and two HDMI 2.0 outputs. This arrangement was chosen specifically so that you can use a VR headset and an HDMI monitor at the same time without adapters or having to swap plugs. Despite this card's heavy-duty appearance, only one 8-pin PCIe power connector is required. 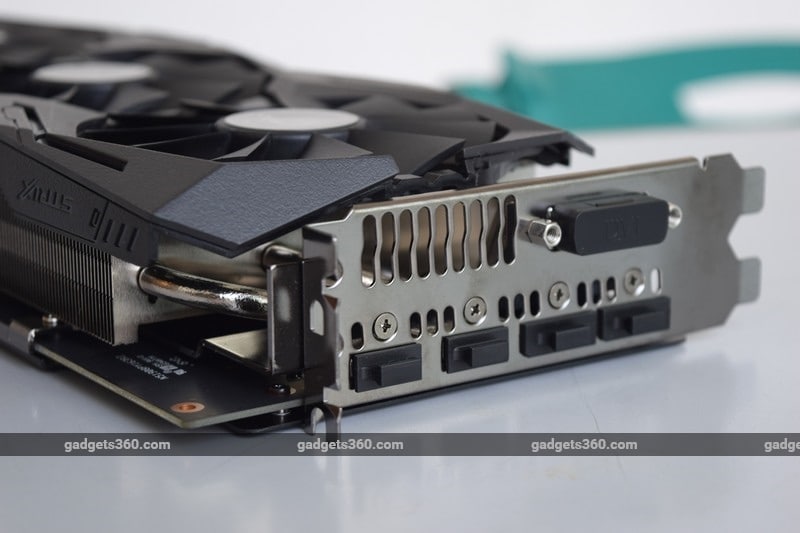 Installing the card in our open-air test bench was no trouble, but you might struggle if you have a normal-sized ATX PC cabinet. There's a plastic sheet over the backplate that needs to be removed before installation, but no obvious warning label or instructions. Asus provides plastic dust blockers for all ports, which we always appreciate. There are no display or power adapters in the box, but you aren't likely to need any. Asus does throw in two Velcro cable ties, which could come in handy.

It became clear fairly quickly that Asus's claims that this card runs nearly silent aren't exactly accurate. You might not have to deal with the thrum of fans or blasts of air being pushed out through a narrow vent, but the card pretty much constantly made an audible high-pitched electronic whine. Whenever activity picked up and the fans started spinning, it started making buzzing, grating noises and the occasional loud chirp. Of course, this might have been a quirk of our review unit, and future firmware updates might help, but our early impressions of the card weren't that great.

If this issue has to do with the components used or the overall design of the Strix cooler rather than a one-off defect with our one unit, your level of annoyance will depend on the type and positioning of your PC cabinet. On the bright side, our card didn't get too hot at any point, and even ran for quite a long time before the fans needed to spin up.

The Aura lighting app worked just as expected, allowing us to choose a static colour or breathing, strobing and colour cycling effects. You don't get multiple zones, but you can set the lights to pulse to your music or change with the card's temperature.

DOOM ran beautifully, as expected. Using the Ultra quality preset and Vulkan renderer, we played through the Foundry level and saw around 90-110fps on average at 2560x1440. We tried pushing the resolution up to 4K and saw that the average framerate dropped to 45-60. That isn't too bad, but the experience is smoother at the lower resolution which means that this GPU really shouldn't be pushed too hard in the latest games.

We ran through a bit of Rise of the Tomb Raider at 2560x1440 using the High preset. Frame rates stayed very consistent, with an average of 54fps and frame times averaging 18.6ms. We weren't bothered by any tearing or skipping. This is a pretty comfortable combination of resolution and quality for the RX 580 to stay at. 4K is not really possible without compromising the frame times, which is about right considering AMD's positioning.

Next up, we ran through some forests and got into a few scuffles in The Witcher 3: Wild Hunt. The resolution was set to 2560x1440, and both graphics and postprocessing were using their High presets. We did see a few glitches, but they were very slight. The 47fps average framerate doesn't show smoothness, but a look at the frame time graph illustrates that there were quite a few erratic frames. Quality stayed above 30fps for the most part, but there were few noticeable tears. Most people should be fine with this level of performance considering how demanding this game is.

Far Cry 4 also ran fairly well at 2560x1440 using its Very High preset. We got a fairly high average of 75fps, and the frame time graph shows that quite a lot of the action held steady at over 60fps. However, the game did stutter in places. We were tempted to push the resolution up to 4K, but found that 1440p was better overall in terms of smoothness.

To cut a long story short, there is absolutely no reason for you to buy a new graphics card based on a Radeon RX 580 GPU if you're already using a top-end model bought within the past two years, but it should be a worthy upgrade if you're using an RX 200 series card or something from lower down the product stack. It's more than enough for high-quality 1080p gaming, and does reasonably well at 1440p too. If you are determined to buy a high-end Radeon right now, make sure you're getting an RX 580 and not the RX 480, since street prices are hovering at around the same level.

AMD should unveil its next-generation Vega architecture soon, but GPUs based on it will target much higher performance, and graphics cards will consequently be much more expensive. Nvidia's GeForce GTX 1060 is also still a very strong competitor, and while it won't beat an RX 580 comprehensively like it beat the RX 480 last year, lower street prices give the green team an advantage.

As for the Asus ROG Strix Radeon RX 580 8GB OC in particular, it's clear that this card isn't the most sensible option for mainstream users. It costs more than most other RX 580 8GB cards, and isn't likely to deliver that much of a marginal performance improvement over a more conventional dual-fan cooler. We're also wary of the electrical whine. If you need a graphics card to show off and aren't willing to spend on a flagship-class GPU, the Strix Radeon RX 580 will satisfy you. If it's going to stay hidden away in a windowless cabinet, save a bit of money and go with a less flashy model.