If you're just putting together a new gaming PC, chances are that you can't avoid hardware that's festooned with RGB LEDs. With little to differentiate between products, it seems motherboards, graphics cards, RAM, and now even SSDs are being blinged out these days. Some people might of course bury these components inside opaque boxes beneath their desks and forget about them, but others will definitely want to show them off. Antec is targeting the latter demographic with its new Dark Fleet series of cabinets. They aren't too expensive, which means that even budget buyers can get in on the fun.

At first glance, the DF-500 and DF-500 RGB with their massive glass side panels seem like they could be the perfect ways to put some colourful hardware on display. The difference between them is that the slightly more expensive DF-500 RGB comes with three 120mm RGB LED fans already screwed into its front panel. Frankly, given the emphasis on showing off, we don't know why a non-RGB version of this case even exists. We have the DF-500 RGB in for review today, and we're going to tell you whether it's good enough to be a showpiece on your desk. 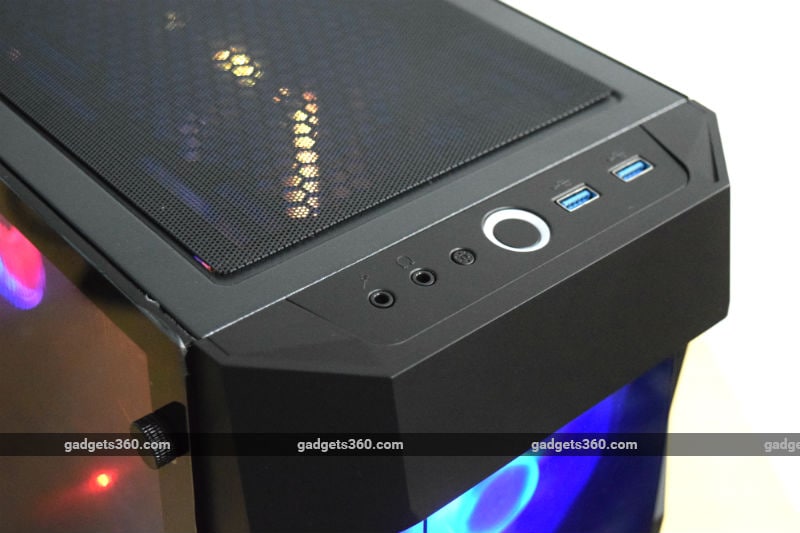 This is a surprisingly compact cabinet, quite in line with current low-end offerings. Even though the front moulding is all plastic, it has a slick, futuristic visor-like design that's sure to appeal to a wide range of buyers. It's neither too minimal nor too gaudy. The only issue we had was the huge Antec logo on the bottom, which is printed in bright white and cheapens the look.

The majority of the front face is translucent with a dark tint, which makes the blades of all three front fans stand out. As good as it looks, there are only tiny gaps on the sides for air intake, so we're going to pay close attention to the noise this results in. A mesh front panel would have been far better for airflow. Hopefully, a lot of dust won't build up over time, because it would be nearly impossible to reach in and clean it.

The removable left panel is a single sheet of tempered glass, also with a smoky black tint. It's held in place by four thumbscrews and you'll have to be careful when lifting it off, because it's heavier than you might expect. The corners are sharp and exposed. The right panel is standard metal, with two thumbscrews on the back to keep it in place.

Antec has chosen to put the USB and audio ports on the top. This keeps the front face blank, at the cost of usability. It would have made sense on a larger cabinet that sits below your desk, but this one is meant to be on display, so you'll have to stretch a bit. The ports are also exposed to dust. There are two standard USB 3.0 ports but no Type-C, which is a pity.

Speaking of dust, there are very neat magnetic mesh panels on the top and on the inside of the front that can be removed easily for cleaning. The one on top is especially useful if you aren't planning to have fans or a radiator there pushing air outwards. There's also a removable mesh panel for the power supply's intake fan. However, there's no protection for the large grille at the rear.

By ditching 5.25-inch drive bays altogether and moving the 3.5-inch drive cage to below the motherboard, Antec has managed to reduce the depth of this case. It measures 480mm tall, 470mm deep and 200mm wide. The 6.7kg weight (without components) is a bit much, but is unavoidable because of the glass. 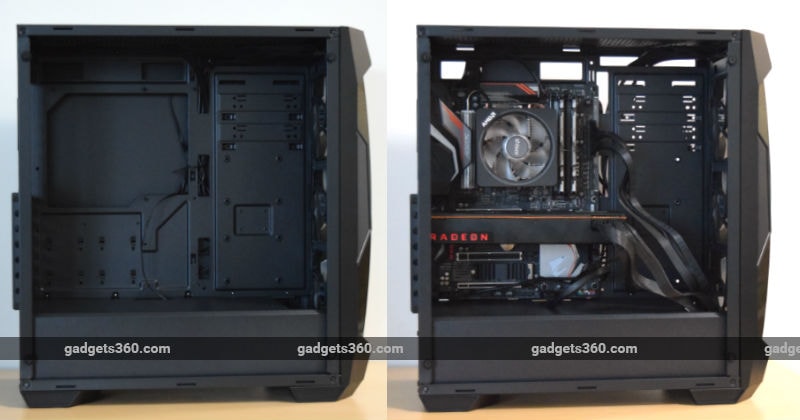 Looking through the tempered glass, you'll see that the bottom quarter of the cabinet is effectively blanked out. We've seen power supply shrouds before, but in this case it's a completely separate chamber that can only be accessed from the opposite side. The rest of the cavity is completely empty.

The power supply chamber posed a huge problem for us when installing components. It's extremely narrow and you can only slide your PSU in one way. Antec claims that there's up to 200mm of clearance for a PSU, but our trusty Corsair RM650 measures only 160mm (170mm with modular cable plugs sticking out of the back) and simply could not fit inside. The reason for this is the relocated 3.5-inch drive cage, which blocks off the one open side of this sealed chamber and leaves no room whatsoever for thick PSU cables. The cage can be slid back and forth a little, but there's simply nowhere for cables to go.

Thus, our PSU would not fit. We had to unscrew the drive cage completely just to get it into place, then disconnect all our modular cables, re-fit the cage, and then reach inside the narrow gap with two fingers to reconnect the cables one by one. Things might not have worked out at all with a non-modular PSU. We would simply have removed the shroud, but even that isn't possible.

On top of all that, it was tough to route cables through the two tiny openings in the chamber, or through the narrow (non-rubber-lined) backplate holes. This is a huge problem, and PSUs don't get a lot smaller. Antec is also showing off promotional images with large radiators and liquid cooling pumps, so there's no excuse for not being able to accommodate a standard-sized PSU.

With potentially no 3.5-inch drive bays available, buyers might have to make do with the two 2.5-inch mounts on the back of the motherboard tray and two more in the main chamber where a drive cage should be. We think it's unreasonable for anyone to have to ditch hard drives completely based on cabinet design. 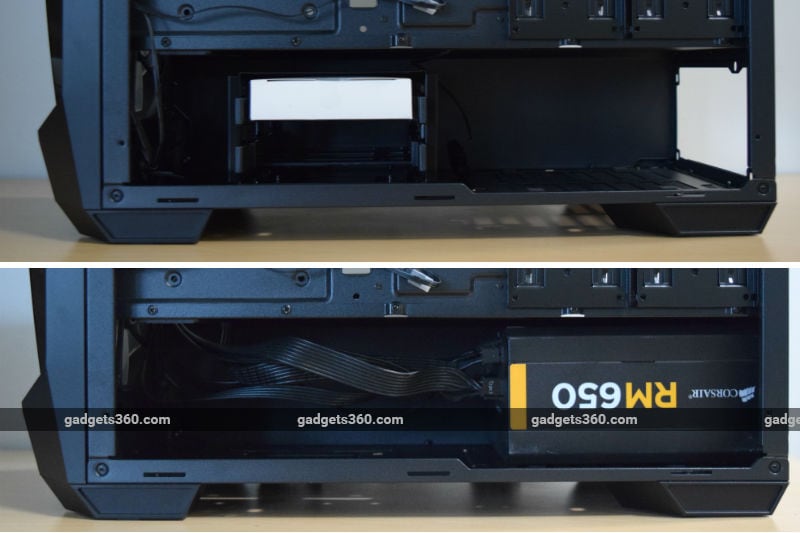 Luckily the rest of our parts fitted just fine, including a Gigabyte Aorus X470 Gaming 7 Wifi motherboard, AMD Wraith Prism RGB cooler, and extra-long AMD Radeon RX Vega64 graphics card. There's approximately 155mm of clearance for a CPU cooler so something tall, like our longtime favourite, the Cooler Master Hyper 212X, will not work. Our graphics card's power cables were also pressed unflatteringly against the glass side panel.

Cable routing proved to be a big challenge, with narrow backplate cutouts that were partially covered by our motherboard and not spaced well enough. Antec includes its own RGB LED controller which is a tiny circuit board screwed on to the back of the motherboard tray. It results in a jumble of wires that need to be tucked away. A stiff little button on the top panel lets you cycle between seven solid colours and two colour-changing effects. You can also plug everything into your own controller or motherboard to sync the fans with the rest of your components.

Antec says that the three 120mm fans in the front can be replaced with two 140mm fans. You can have the same arrangement on the top, or mount a radiator there instead. While the non-RGB version of this cabinet comes with a 120mm exhaust fan at the back, it's surprising that there isn't one here to help direct airflow.

While we aren't happy at all with some of Antec's design decisions, we do have to say that this case is constructed very well. It doesn't bend or flex, and the interior is coated in black for maximum visual effect. There are no sharp metal corners anywhere, and it's nice to see thumbscrews and tool-free drive trays.

We deliberately chose a CPU cooler and graphics card that can get quite loud, and then we ran a few of our heavy benchmarks that are known to stress any hardware. We didn't find that the DF-500 RGB's fans added much to the noise level, but we could feel that the entire case was getting warm. We would definitely add a rear exhaust fan.

Our final concern was whether or not the tempered glass and plastic front panels would pick up scratches with ordinary handling. Both seemed to survive our handling over the course of a week, but we'd still be careful with everyday use. We would advise users not to peel off the protective plastic film when first unpacking this cabinet - wait until you are done building. 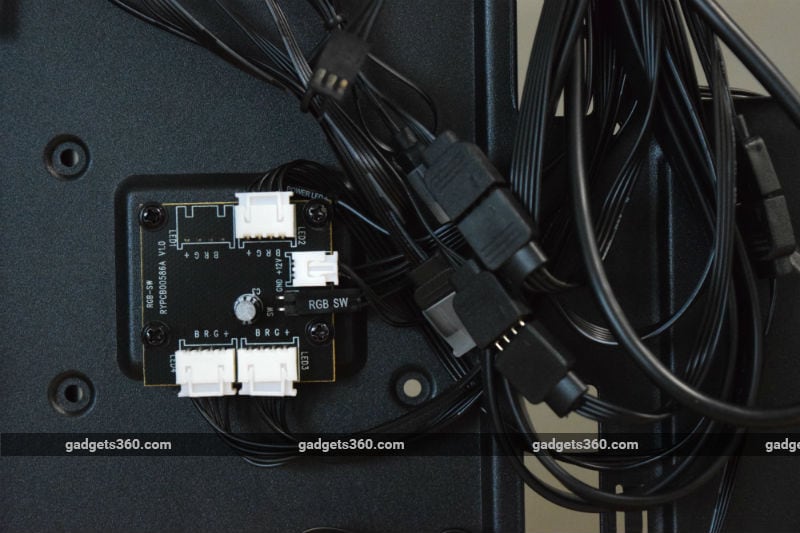 Verdict
The Antec DF-500 RGB looks incredible in promo photos and videos online, and it would be very tempting to buy one based on that alone. It promises high-end looks and features at an entry-level price, but the interior design makes life very difficult for PC builders and users. We don't expect this kind of frustration from a company as experienced as Antec. Ultimately, we can't recommend this cabinet as whole-heartedly as we would have liked. If you think you'll build once and then never tinker with the insides of your PC, you might not mind so much.

product The Antec DF-500 RGB looks incredible in promo photos, but how well does it work for enthusiast PC builders in the real world? Read our review to find out. 3.5 out of 5 stars