At the beginning of this year, AMD announced a partnership with enterprise storage management company Enmotus, bringing a tiered storage acceleration system called FuzeDrive to users of its Ryzen and Ryzen Threadripper desktop CPUs. It's an obvious parallel to Intel's Optane Memory effort and Apple's Fusion Drive, essentially letting users virtually combine the strengths of a quick but low-capacity SSD with a slow but large hard drive. In all these implementations, the two different media are considered by the PC to be a single storage location, and file accesses are drastically sped up by making sure that the data you need is pre-emptively swapped onto the SSD.

Before we'd even had the chance to get acquainted with FuzeDrive, AMD announced that it was rolling out a new version under its own StoreMI brand. FuzeDrive was an optional extra priced at $19.99 (approximately Rs. 1,376), but StoreMI is free with all second-gen 400-series motherboards. This makes it a lot more tempting, but it's still highly likely to fly under the radar for many users.

We're going to set up StoreMI and check how much of a difference it really makes, and whether this is something that home users and enthusiasts should be interested in.

StoreMI works by creating one virtual drive with two physical locations. As far as Windows is concerned, it's just business as usual. StoreMI isn't a small cache like Optane Memory. Instead, it's conceptually referred to as tiered storage. The emphasis here is on machine learning algorithms that decide what is (or will soon be) important enough to be moved to the faster storage tier.

While Intel's Optane Memory drives are built using a completely different kind of flash memory and must be paired with a SATA hard drive or SSD, AMD says that StoreMI can club any two drives. The options include SATA and NVMe SSDs, hard drives, blocks of RAM, and even Optane hardware. The benefit is only really felt if you use two different classes of storage; one slow and one fast. That could be an SSD and hard drive, or even one superfast NVMe SSD and another more affordable SATA one for space.

StoreMI is completely free as long as you're using a 400-series motherboard, and thanks to AMD's policy of supporting multiple generations of processors, it will work with Ryzen as well as older Athlon and A-series CPUs. If you have a 300-series motherboard, you can still pay $19.99 for FuzeDrive Basic. StoreMI limits your faster drive to 256GB, but if you want to use up to a 1TB SSD, you can pay $59.99 (approximately Rs. 4,130) for FuzeDrive Plus instead.

You can also choose to use up to 2GB of your system RAM (4GB with FuzeDrive Plus) as a FuzeRAM cache. This can give you an additional speed boost, but Enmotus says the extent of this will vary depending on workloads. StoreMI itself requires a minimum of 4GB of system RAM, and 2GB over and above that to enable FuzeRAM.

AMD is quick to point out that StoreMI is not about caching data, which means that it does not use your SSD in order to accelerate reads and writes that are targeted at the hard drive. It also isn't like RAID, which splits data evenly between pairs of identical drives in order to speed up reads and writes. Instead, it creates a single volume and just decides what data should be routed to which physical device, or tier.

So what happens if you lose power, or if either drive fails? According to Enmotus, you won't have any trouble during regular operations. Even if StoreMI is shuffling data between the two physical drives in the background, a sudden power loss won't cause corruption. However, you have no way of knowing what data is on which drive, so a backup strategy in case of physical failure is of the utmost importance.

For our tests, we used an AMD Ryzen 7 2700X processor and Gigabyte Aorus X470 Gaming 7 Wifi motherboard, with 16GB of G.Skill DDR4-3400 RAM, a Radeon RX Vega 64 graphics card, Corsair RM650 power supply, and AMD's own Wraith Prism LED cooler. Our two target drives are a 250GB Samsung SSD 860 Evo (SATA M.2) and a 2TB WD Blue hard drive, both provided brand new and factory-sealed by AMD for the purpose of this review.

We installed a fresh copy of Windows 10 with all the latest updates onto the HDD and ran our first tests. We then added the SSD to our system and enabled StoreMI. Everything necessary to boot our PC was automatically moved to the SSD as part of the optimisation process. You can also do this the other way around, starting with your boot drive and adding another storage medium. Later, we tested just the SSD as a boot drive to quantify the performance difference you can expect if you're upgrading with a fresh Windows install instead.

You'll need to download the latest version of StoreMI from AMD's website. At first, the StoreMI installer quit on us repeatedly claiming that a disk controller was either not found or set to the wrong mode in our motherboard's BIOS. It turned out that all we had to do was initialise the hard drive using the Windows Disk Manager and eject our Windows installation USB drive, which is a much simpler fix. We also had to download and install Java as part of the installation process. 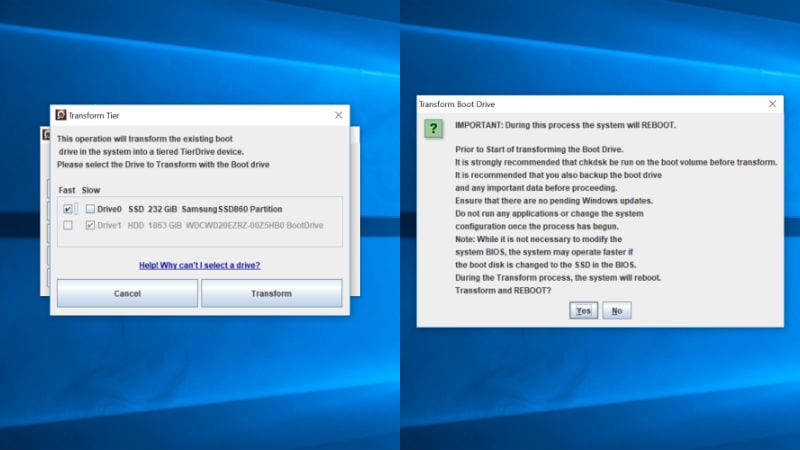 After one reboot, installation was complete. It was then just a matter of following a few steps on screen to turn the two separate drives into one tiered volume. We had to confirm that the two drives were correctly detected as "Fast" and "Slow", and then click 'Yes' on a dialogue box that popped up to inform us of basic precautions such as backing up our data and making sure that Windows wouldn't try to install updates in the middle of the process.

Our 250GB SSD (232GB effectively) and 2TB SSD (1.86TB effectively) were detected as a single 2.1TB volume after the reboot. This is interesting, because Optane Memory doesn't get added to the capacity of the hard drive you are accelerating.

The StoreMI app interface isn't very user-friendly. The design is dated, and not all buttons and options are labelled clearly. You can choose whether the StoreMI volume you create will be bootable or not, and there's a long list of warnings and instructions - run Chkdsk, make sure no Windows updates are pending, back up all data, and check the BIOS boot order for the drives being combined. In a later step, the term TierDrive is used to refer to the resulting StoreMI volume, which could confuse users. If AMD wants StoreMI to be used by casual users and not just enthusiasts, the UI needs to be a lot more polished.

We used CrystalDiskMark to evaluate the performance of the SSD alone, the SSD and HDD with StoreMI, and the HDD alone. We also checked out how StoreMI works with the FuzeRAM cache enabled.

Unsurprisingly, results for the Samsung SSD 860 Evo were on par with what we got when we reviewed the 2.5-inch 1TB version of this same drive. Sequential reads and writes came in at 556.8MBps and 516.7MBps respectively, which is about as much as a SATA SSD can achieve. In contrast, the hard drive was capable of 129MBps and 133.6MBps respectively. That alone illustrates the difference even a basic SSD can make to PC speed and responsiveness. 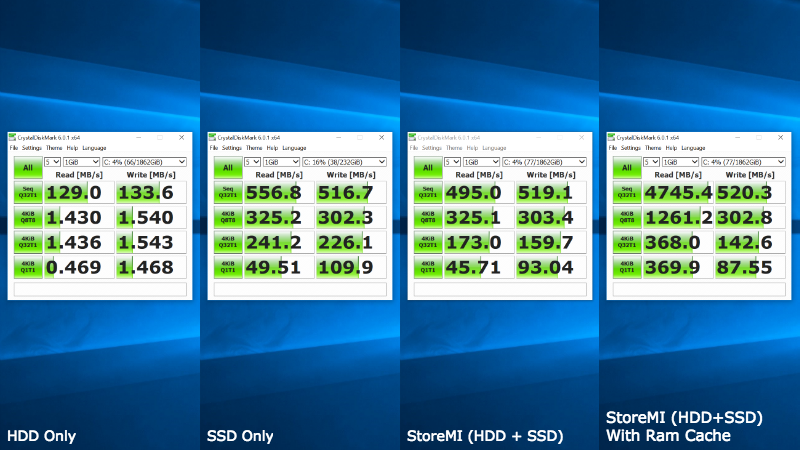 With StoreMI enabled, we were able to get 495MBps and 519.1MBps respectively - not quite as good as an SSD on its own, but a huge step up from a hard drive, without the inconvenience of having to reinstall Windows. With the FuzeRAM cache turned on, we got a staggering result of 4797.7MBps for sequential reads, but a middling 511.3MBps for sequential writes. 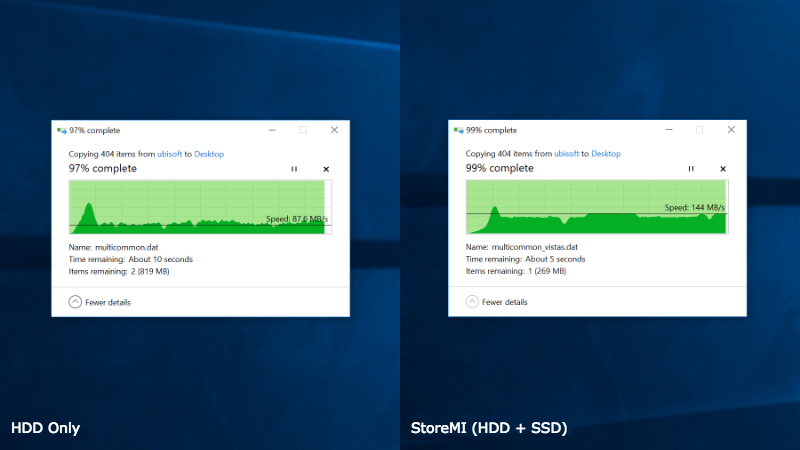 As we know though, sequential speeds don't always reflect real-world usage. CrystalDiskMark also reports random 4K reads and writes. At a queue depth of 1, which skews towards the strengths of spinning hard drives, our WD Blue HDD gave us 0.469MBps and 1.468MBps reads and writes, while the Samsung SSD 860 Evo gave us 49.51MBps and 109.9MBps respectively. With StoreMI, the numbers were 45.71MBps and 93.04MBps, while StoreMI plus the RAM cache delivered 360.7MBps and 86.08MBps respectively. The cache might make reads an order of magnitude faster, but there is a small penalty for writes.

We noticed much the same trend with our other tests. We used PassMark AppTimer to check how quickly a simple Windows program can be launched, using the Internet Explorer executable across three attempts. We also timed our test PC booting from a completely powered down state thrice. Finally, we copied a 31.4GB folder of assorted files from an external Samsung SSD T1 drive and noted the time as well as pace using a stopwatch.

Just to see what might happen, we tried disconnecting the hard drive (on which we had installed Windows before enabling StoreMI), only to be greeted by an error. The PC simply became unbootable. Disabling StoreMI took over six hours, and when you do this, all data is moved over to the larger of the two drives. We were able to remove the SSD and then boot without any trouble. Interestingly, traces of the software remained even after uninstalling it - Windows still thought it was booting from a phantom StoreMI volume. 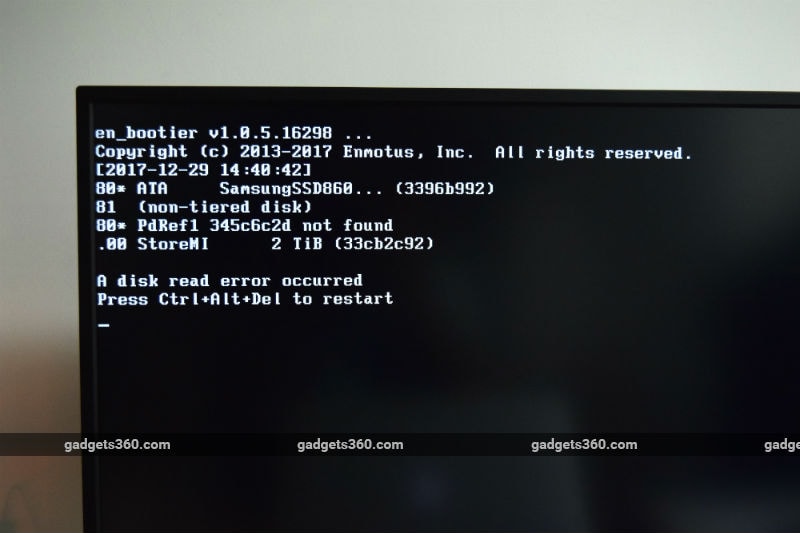 We should note that as with all machine learning tools, it might take some time for StoreMI to reach its full potential on any PC. Once you're loaded with apps and data, it could be a challenge for the system to determine what can go where. The benefits will also be most apparent when you use a heavy app repeatedly.

Verdict
It's immediately obvious that StoreMI is a lot more versatile than Optane Memory, not to mention a lot more accessible since it's free and doesn't depend on specific and expensive hardware. It will work very well for people who have a small SSD that isn't being used optimally, or who want the best possible performance with an extremely constrained budget. It could also be an easy and non-disruptive way to upgrade a PC with a 400-series motherboard somewhere down the line. There are many permutations and combinations that can work, and we can't possibly test them all. In particular, you might consider using StoreMI for a non-boot drive.

On the other hand, it isn't a blanket improvement over using an HDD and an SSD independently. If you don't mind putting in the effort to manually move things from one drive to another, you get better speed and the benefit of knowing exactly what is where. That makes backups easier, and one drive failure won't bring the other one down.

One thing that AMD and Enmotus need to address is the software's UI and documentation. Right now, we wouldn't feel comfortable recommending StoreMI to anyone who isn't intimately familiar with building and tinkering with PCs. If you think that you match that description, StoreMI is a pretty interesting value-add to an already appealing desktop platform.

Price: Free (with any 400-series motherboard)