AMD's Ryzen 7 launch earlier this year went off pretty much without a hitch. A lot was riding on it, considering that before this, AMD hadn't managed to put out a CPU worth getting excited about in nearly a decade. The Ryzen 7 family targets relatively high-end buyers, and we were promised that the Ryzen 5 and Ryzen 3 lines, with fewer cores and lower speeds, would follow in due course. So far, the company has kept all its promises, and so we now have with us a Ryzen 5 1600X CPU for review.

This is the most powerful and highest priced of the four Ryzen 5 models currently available. It is carefully calibrated to take on Intel's Core i5 CPUs, hitting them in their biggest weak spot. The target audience is mainstream users and enthusiasts who want it all, but who still see the merits of saving money where they can. We're going to see how it stacks up against the mighty Ryzen 7 1800X which we tested at launch time, and whether Intel should be worried about losing its grip on this extremely important market segment.

The Ryzen 5 lineup is based on the same Zen architecture as the Ryzen 7 models, and we have a complete guide to all the underlying technology and the AM4 platform for you to read. In short, Zen is an all-new design which targets power and efficiency, and pulls off a stunning 52 percent improvement in performance compared to previous offerings. AMD has been very clever with its design choices, particularly the use of a scalable interconnect called Infinity Fabric and modular core complexes which allow Ryzen models with different numbers of cores to be manufactured easily.

All Ryzen 7 and Ryzen 5 chips have two core complexes, with four physical cores each capable of executing two threads at once. Ryzen 7 models have eight working cores, whereas Ryzen 5 models have either four or six, with the rest disabled. This is an industry-standard practice called binning, and it allows AMD to ship processors which might have minor defects in specific areas, or simply disable functioning logic to meet market demand at any given price point. The six-core Ryzen 5 1600X has three active cores per complex, and quad-core models have two each, rather than a single complex with four active cores. 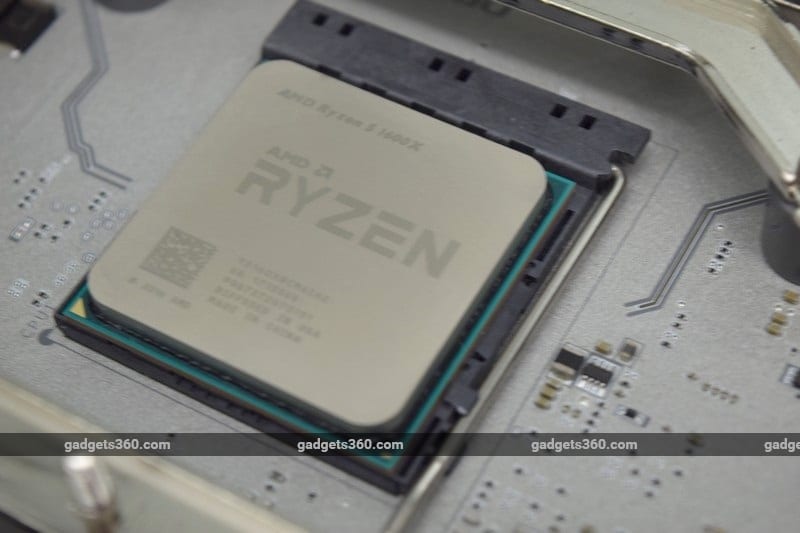 AMD has chosen to scale cores and threads evenly across all current offerings, while Intel uses the presence or lack of Hyper-Threading to differentiate between product tiers. The entire desktop Core i5 series consists of non-Hyper-Threaded quad-core models, which now look extremely weak against the Ryzen 5 1600X with its six cores and twelve threads. AMD knows very well that this is a massive market disruption, and is happy to point out that lots of games and productivity tools these days are able to take advantage of more than four threads. In the best-case scenario, according to AMD, a Ryzen 5 1600X should be able to outperform a similarly priced Core i5-7600K by a staggering 69 percent.

The Ryzen 5 1600X has a base clock speed of 3.6GHz and a boost speed of 4GHz, which you might notice is exactly the same as the Ryzen 7 1800X - the main difference here is that you get two fewer cores. However, you still get the full L3 cache complement, which is 16MB. TDP is rated at 95W which means that AMD has also calculated the same thermal headroom as the Ryzen 7 1800X.

That comes into play because of AMD's XFR feature, which means that this CPU can push itself beyond its 4GHz clock speed ceiling if its sensors report that temperatures are consistently low enough. AMD says that this is a way to "reward" those who use powerful CPU coolers - i.e. enthusaists. For the same reason, this processor doesn't come with a cooler of its own when you buy it in retail.

Ryzen 5 CPUs work with the same motherboards as their Ryzen 7 siblings, collectively known as AM4 because of the AM4 socket that's common across them. You can choose from the overclocker-friendly X370, mainstream B350, value-focused A320, or the upcoming small-form-factor X300 and A300 platform controllers. There are far more choices in the market now than there were at the time of the Ryzen 7 launch, so you can have your pick of models from Asus, Gigabyte, MSI and ASRock.

AMD pits the Ryzen 5 1600X directly against Intel's Core i5-7600K, and in India it's roughly Rs. 1,000 less expensive. However, one big thing that you don't get is integrated graphics. Most enthusiasts will use a discrete graphics card anyway, but an integrated GPU doesn't cost the end user anything, and is at least something to fall back on. 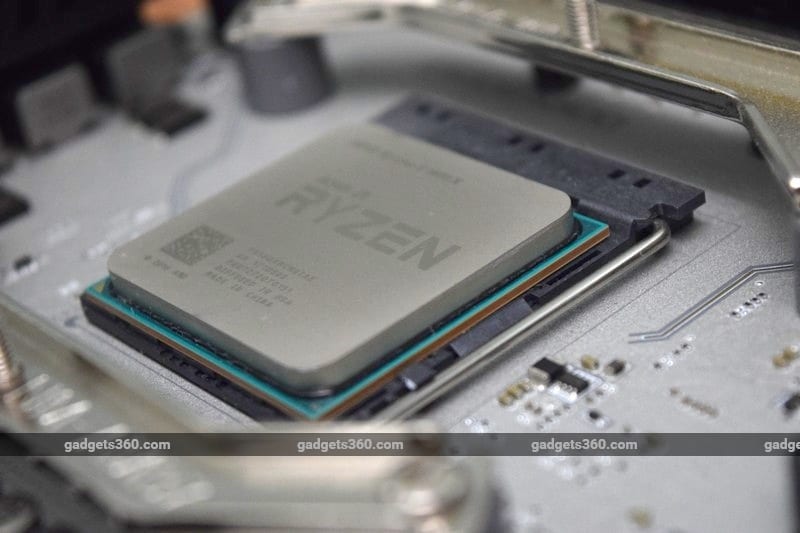 We tested our AMD Ryzen R5 1600X sample unit with the following components. Only the SSD has changed since we reviewed the Ryzen 7 1800X, which allows us to compare scores directly with very little scope for variance. The motherboard and CPU cooler were both provided by AMD at the time of the Ryzen platform launch.

We found that performance was roughly what we expected from a processor that with 6/8ths the power of the Ryzen 7 1800X. In single-threaded applications, the two are pretty much identical. In tests that use the processor's full capabilities, there's obviously less power, but the interesting side effect that less heat generated within the same envelope potentially allows the Ryzen 5 1600X to run faster for longer.

Starting with PCMark 8, we noted an interesting spread of results, with the Ryzen 5 actually exceeding the performance of the Ryzen 7 in the Work test by a fair margin. The Creative test, which is much more likely to benefit from multiple cores, showed a decisive victory for the Ryzen 7. On the same note, we saw identical scores for the two CPUs in Cinebench R15's single-threaded mode, while scores in the multi-threaded mode scaled pretty perfectly from six cores to eight, ie a 33.33 percent increase. The physics sub-score of 3DMark's Fire Strike Ultra test showed almost the same degree of scaling.

SiSoft SANDRA showed that the Ryzen 7's extra grunt makes a difference in CPU-bound arithmetic and encryption workloads, as well as cache bandwidth. Our real-world file compression and video transcoding tests also delivered predictable results, with the Ryzen 5 taking slightly longer to complete each task. You get what you pay for, and the value proposition of the six-core CPU compared to its eight-core sibling really shows. In cases where every second doesn't count, you could be quite happy paying less money for the Ryzen 5.

We also played a few games using the same graphics card to isolate performance differences that can be attributed to the CPU alone. Ashes of the Singularity and Metro: Last Light Redux both showed roughly the same level of performance across CPUs, with the Ryzen 5 actually coming out ahead by a miniscule margin in both. However, the average frame rate in Deus Ex: Mankind Divided dropped considerably with the lower-priced CPU. Very few games can take advantage of more than four threads, but the number will increase quite a lot over the expected lifetime of any PC purchased today, so that's something for gamers to keep in mind.

Using AMD's own Ryzen Master overclocking utility, we tried to push the Ryzen 5 1600X to 4.2GHz but after multiple unsuccessful attempts, had to settle at 4.1GHz. Cinebench showed a slight increase in scores, from 1219 to 1261 points. If you have a capable cooler as well as the time and patience to fine-tune your settings, you might be able to squeeze some more performance out of this CPU.

We had absolutely zero cause for concern about noise and heat with our Ryzen 5 1600X running under the beefy Noctua cooler supplied by AMD at the time of our original Ryzen 7 review. While neither of these processors comes with a stock cooler, you should be perfectly fine with something much smaller. AMD knows that it has to combat the longstanding perception that its CPUs run hot and loud, and we hope that it can successfully communicate to potential buyers that those days are now well in the past. 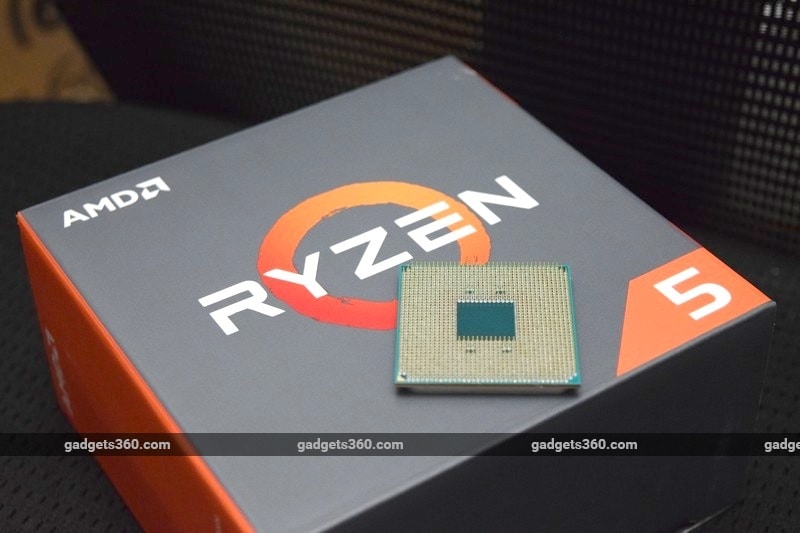 Verdict
AMD has delivered a solid CPU for those whose budgets can't stretch enough to accommodate a Ryzen 7, but who still want the benefits of lots of cores and threads. It sells for around Rs. 18,999 which is higher than its official MRP (Rs. 18,199) due to market forces, but is still great value because six cores and 12 threads is more than any mainstream user has ever been able to get before now. Compared to Intel's equivalently priced Core i5 model, which in India is currently the Core i5-7600K, the appeal is clear. AMD might not be able to match Intel on the architecture level, but it can just throw more cores into the mix. Creative professionals and gamers stand to benefit the most, while office and productivity apps might not see much benefit.

One big thing to consider is the additional cost of a CPU cooler and a graphics card - Ryzen CPUs don't have integrated GPUs, unlike Intel Core CPUs. Most enthusiasts would use a discrete graphics card with either platform anyway, but casual users don't need anything more than onboard graphics. At least you have the choice with Intel, or can add to your build incrementally if you have budget constraints or want to wait for a new GPU launch. Even the most bare-basic GeForce GT 710 card would cost at least Rs. 2,500 today.

The choice between Intel and AMD will come down to what software you need to run and how you choose to balance your computer's CPU and graphics capabilities within your budget. Neither option is bad, and both will do very well for many years to come. For enthusiasts who are going to buy a graphics cad anyway, we lean slightly towards AMD's offering because more cores and threads will come in handy over the years. For office or casual users, the lower cost and complexity of an Intel-based system could still make more sense.

Moto Z2 Play and Moto C Plus in India, Google Drive Backups, Xiaomi Reward Mi, and More: Your 360 Daily
The Most Interesting Things at Computex 2017 Were the Chairs