Samsung and WD have some serious competition on their hands

We've reviewed several of Adata's affordable, entry-level storage products in the past, and now it's time to look at a high-end SSD model, the XPG SX8200 Pro. XPG (which stands for Xtreme Performance Gear) is a sub-brand of Adata, which targets gamers and enthusiasts who want to step up to higher-performing hardware. The company says that the XPG SX8200 Pro is its fastest performing SSD ever, and it's one of a small number of such products to ship with a heat spreader to help with sustained heavy workloads. It's also priced relatively well in India, considering its intended target audience.

This model, like all PCIe SSDs, targets users who are looking for better performance than what standard legacy SATA is capable of. It could also be an interesting option for upgrading a compact laptop, where space is at a premium. Will Adata be able to buyers over and compete with SSD juggernauts Samsung and Western Digital? Read on to find out.

The NVMe standard allows SSDs to hook directly into PCIe bandwidth, rather than being limited by the SATA standard which was designed with much slower spinning hard drives in mind. The XPG SX8200 Pro uses the physical M.2 form factor, and M.2 slots are now commonly found on mid-range as well as high-end motherboards. This drive uses four PCIe 3.0 lanes.

Adata has designed a thin heat spreader for the SX8200 Pro SSD which you can choose to use if you want. It's much simpler than the heatsink that came with the Adata XPG Gammix S10 and also the WD Black SN750, which we have reviewed. Our review unit came with it already attached, but it ships separately in the device's retail box. Many motherboards have their own M.2 slot heatsinks which you might prefer to use instead for aesthetic reasons or because they're beefier.

We're thankful that Adata has not gone down the RGB LED route with this SSD. The red and black XPG logo on the heat spreader is rather garish, but at least M.2 modules are rarely seen once installed. There are chips on both sides of the module, which might make it a bit too thick for some ultra-portable laptops.

Adata claims read and write speeds of 3500MBps and 3000MBps which is a whole lot better than the 1800MBps and 850MBps ratings of the Adata XPG Gammix S10. However, these are best-case scenario numbers and apply only to the 1TB version of this SSD – the 256GB version has a much lower 1200MBps sequential write rating and the 512GB unit that we're reviewing claims 2300MBps, while reads remain the same. Adata will be taking on the Samsung SSD 970 Evo Plus and WD Black SN750, which both claim similar numbers.

Thanks to the use of 3D TLC NAND flash and the Silicon Motion SM2262EN controller, this SSD promises class-leading power efficiency with 0.33W consumption when active and 0.14W in standby. SLC caching is a technique using which the SSD temporarily writes one bit instead of three to a TLC cell in order to speed up operations, and end-to-end data protection is said to prevent against data errors, especially when overclocking which might introduce instability.

The XPG SX8200 Pro shouldn't be confused with the older XPG SX8200 model. This drive is available in 256GB, 512GB and 1TB capacities. A 2TB version is listed internationally but doesn't appear to be available in India.

Endurance is rated at 160, 320 and 640TBW for the 256GB, 512GB and 1TB versions respectively. These aren't the highest figures we've seen, but they're still very good. The warranty is five years.

There's no mention of bundled software anywhere on the box and nothing on the drive itself, but we noticed that Adata offers two tools for free on the product's website. Acronis True Image can help you migrate the contents of an old drive while upgrading a PC, while SSD toolbox lets you run diagnostics, update firmware, monitor the drive's health, and erase it securely. These are quite useful so it surprised us that the company doesn't market the drive by promoting them. 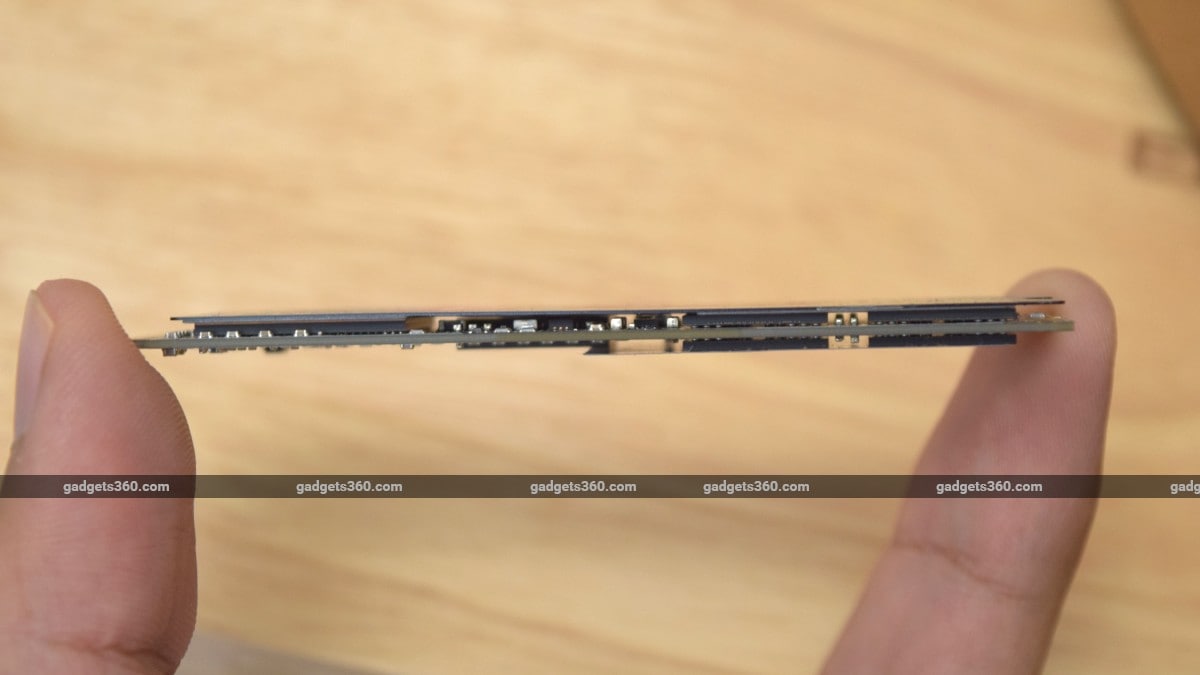 We reviewed this SSD on our standard test bench, which is built using an AMD Ryzen 7 2700X CPU, Gigabyte Aorus X470 Gaming 7 Wifi motherboard, 2x8GB of G.skill DDR4 RAM, a 1TB Samsung SSD 860 Evo boot drive, an XFX Radeon R9 380X graphics card, and a Corsair RM650 power supply. We used the latest version of Windows 10 with all drivers and patches up to date.

We ran our tests with the heatspreader attached and without our motherboard's heatsink. Windows' Disk Management console recognised the Adata XPG SX8200 Pro and showed us a total formatted capacity of 476.94GB for our 512GB unit.

Of course we begin our evaluation with CrystalDiskMark 6, which uses both sequential and random data and is optimised for SSDs. We saw incredible sequential read and write speeds of 3518.5MBps and 2374MBps respectively; slightly exceeding the Adata's promises. Random reads and writes at a queue depth of 8 were also very impressive, at 1458.4MBps and 1411.5MBps respectively.

Moving on to the Anvil benchmark which tests a variety of workloads, we got scores of 6,458.39 for reads and 8,513.57 for writes, for a total of 14,971.96. These numbers all show that the Adata XPG SX8200 Pro can deliver some of the best performance we've ever seen from an SSD (not counting the PCIe 4.0 Corsair Force MP600 which we tested earlier this year). Keep in mind that the 1TB version of this drive can theoretically achieve even higher speeds. 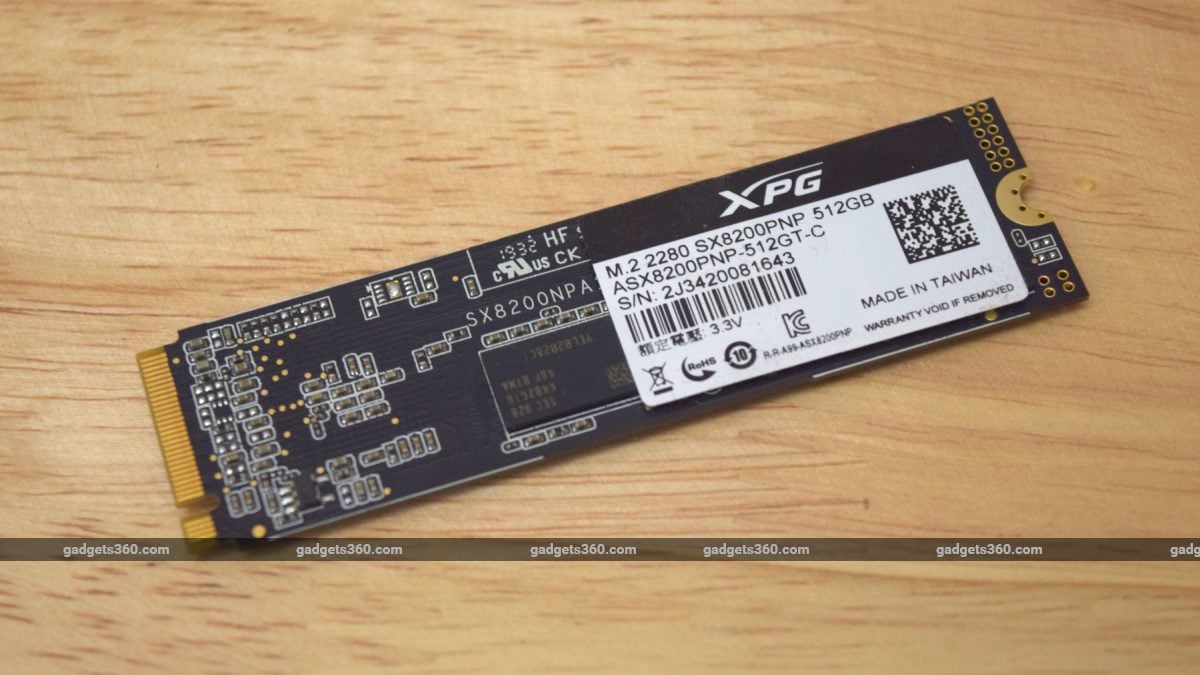 Adata has delivered a blistering fast NVMe SSD which can stand up to the Samsung SSD 970 Evo Plus and the WD Black SN750. Exact comparisons are difficult since we've reviewed different capacity versions of each of these drives, but you can see that the Adata XPG SX8200 Pro is equivalent, if not better, to these two leading options in terms of speed. The company's power efficiency claims are also interesting since this isn't a parameter that many consider.

We are already seeing faster PCIe 4.0 SSDs in the market but AMD's Ryzen 3000-series and Threadripper 3000-series are the only CPUs that can support them, and only if you have a premium motherboard. It will be a while before PCIe 3.0 is outdated.

The best part about this drive is its price. The 512GB unit we've tested sells for just Rs. 8,525 online which is better than both WD and Samsung's options. There really are no downsides here. We recommend this SSD without any questions.

product The Adata XPG SX8200 Pro is not just fast but also affordable, and could be one of the best options if you're looking for a new NVMe SSD 4.5 out of 5 stars