By now, SSDs have become commonplace in laptops, and we wouldn’t advise building even a budget desktop without one. However, external drives are a different story. Speed isn’t as important as capacity when it comes to backing up and storing all your accumulated data, so the concept of an external SSD is a harder sell. Still, as prices come down, there is a growing market for them.

We’ve already tested two such models from Samsung and SanDisk, which we found to be incredibly useful but not exactly practical for all situations. Adata is a lesser known name when it comes to storage products, but it’s one of Taiwan’s most prolific flash memory vendors, and it has just decided to get into the external SSD game as well. 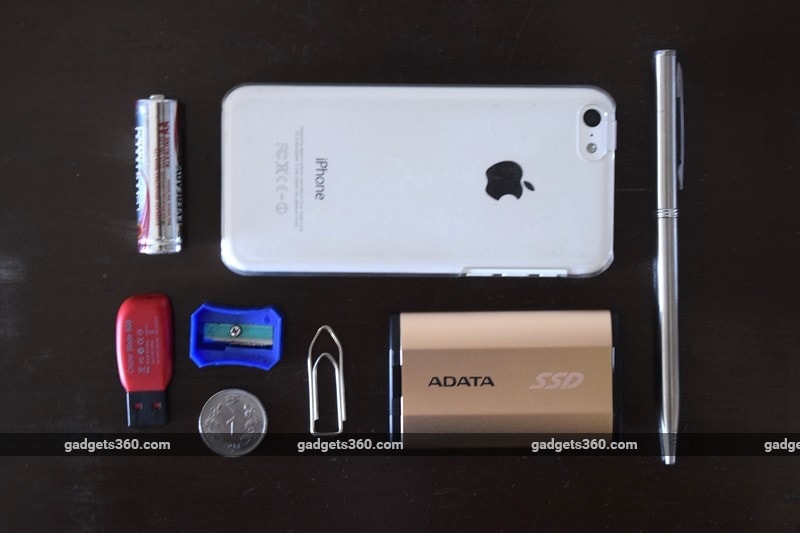 We’ve previously reviewed two similar products, the Samsung SSD T1 and SanDisk Extreme 500, both of which were good, but for different reasons. The new SE730 (250GB) looks like it could be handy, but does it have what it takes to beat such competition in this very narrow niche? Let’s find out.

Adata SE730 look and feel
The Adata SE730 is actually somewhat smaller than the Samsung T1. It’s about the same length and thickness, but a lot narrower. It looks like a slightly oversized pocket lighter, or maybe a small tin of mints. We received a gold review unit, and it’s also available in a rich red. The metal exterior has a speckled matte finish, and isn’t gaudy at all. We would have liked a more sober option, but most people will be fine with this and even show it off. 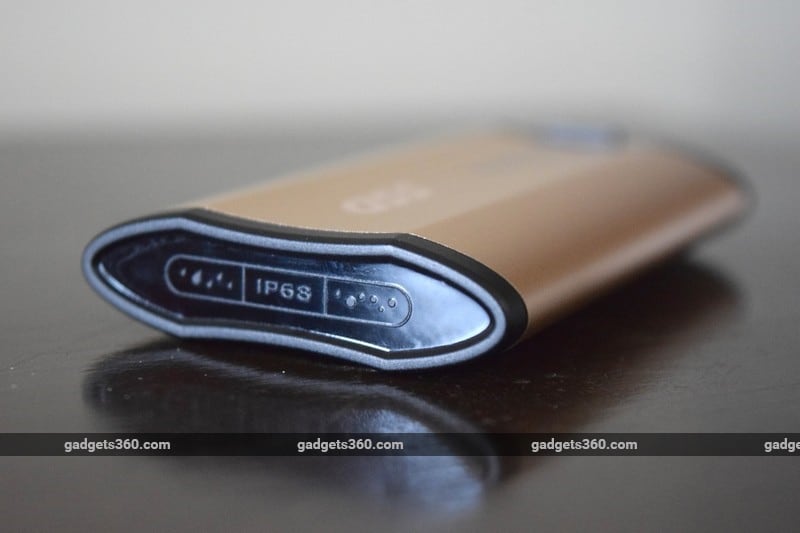 Slight depressions on the front and back make the SE730 very easy to hold, and it only weighs 33g. The device is rated IP68 for water and dust resistance as well as MIL-STD-810G 516.6 for shock resistance. It should survive being immersed up to 1.5m deep in water for up to 60 minutes. Surprisingly, there’s no mention whatsoever of these certifications on the product’s packaging – they’re huge advantages for a small device that’s going to be carried around a lot, in our opinion.

That rating is achieved thanks to a rubber-lined cap on one end. It’s easy to pop off and move out of the way. Beneath it, you’ll find a USB Type-C port, which makes perfect sense today. You get only a short Type-A to Type-C cable in the package, so you’ll still need an adapter to use it with today’s slimmest laptops and smartphones (or your own cable with Type-C on both ends, which is more expensive). 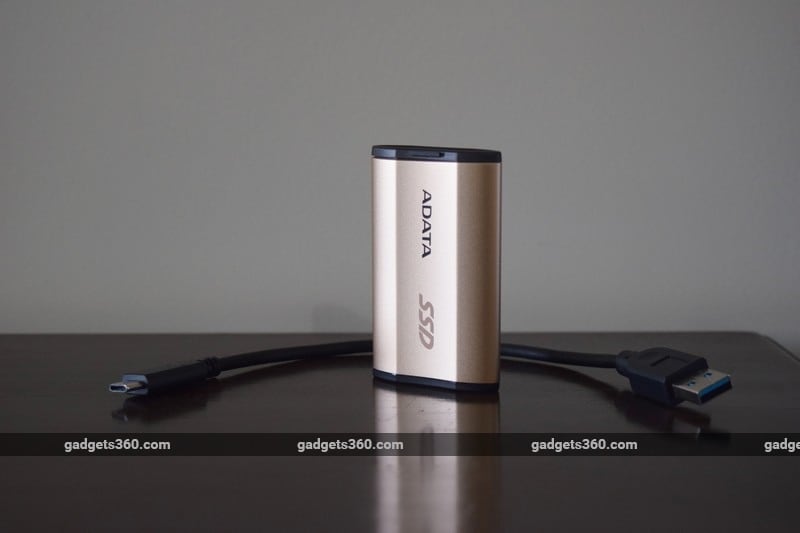 Adata SE730 specifications and performance.
Another interesting thing that Adata mentions in passing on its website but doesn’t quite highlight on the SE730’s box is the fact that it supports USB 3.1 Gen 2 speed, which is 10Gbps as opposed to the 5Gbps that most drives labelled USB 3.0 and even USB 3.1 actually run at. This could be extremely useful for those who move large files around. One thing that’s missing though is hardware-level encryption, which both the Samsung SSD T1 and SanDisk Extreme 500 offer.

Files can be encrypted using Adata’s HDDtoGO utility, which is offered as a free download from its website. This also gives you a basic file sync tool and portable Web browsers and email clients for you to use any PC without leaving obvious traces. 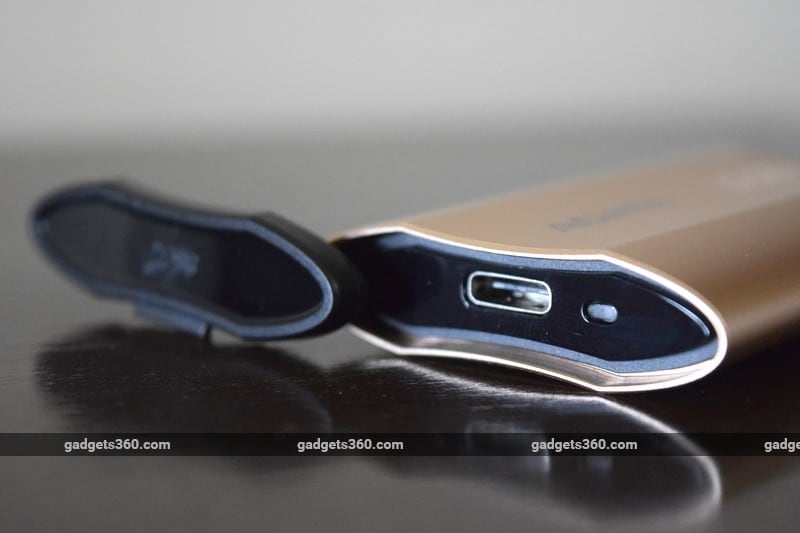 Adata also says that it has used high-quality industrial grade MLC flash, resulting in peak read and write speeds of 550MBps and 450MBps respectively – we’ll see how far that holds true in our tests. Note that our test platform’s Gigabyte Z170X-UD5 TH motherboard does support USB 3.1 Gen 2 thanks to its Intel Thunderbolt controller, but only through its own Type-C ports. We were therefore constrained to USB 3.1 Gen 1 speed (5Gbps). The configuration is as follows:

We used both SiSoft SANDRA 2016 and CrystalDiskMark 5.0.3 to test the SE730’s read and write speeds. SANDRA measured sequential read and write speeds of 388.22Mbps and 387.73Mbps respectively, which is a strong showing. The Samsung SSD T1 scored almost exactly the same in terms of reads, but was much slower for writes, which gives Adata the advantage. Random read and write speeds are much more indicative of day-to-day usage, and we measured 301.71Mbps and 394.31Mbps respectively, which was a little weaker than the Samsung SSD T1’s read speed but much stronger than its write speed, and stronger overall than the SanDisk Extreme 500. 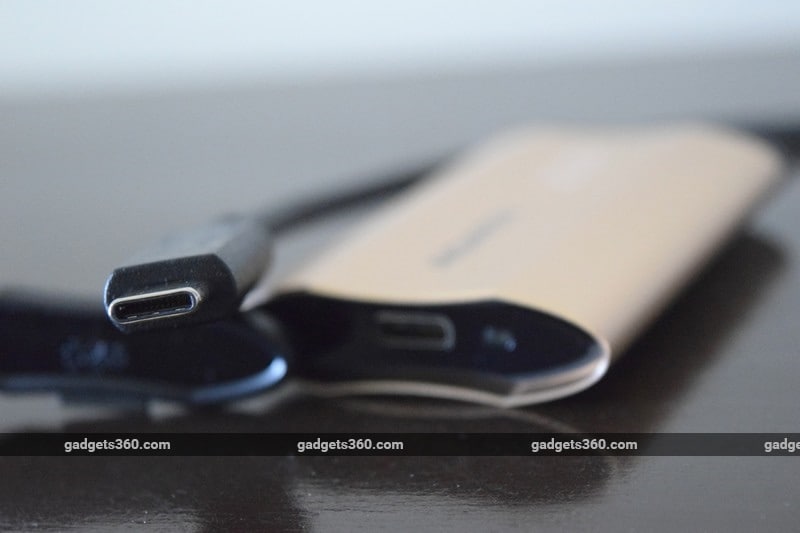 CrystalDiskMark gave us pretty much the same results as SANDRA did, but also tests read and write speeds using protocols designed specifically for SSDs. Specifically, when using a queue depth of 32 instead of 1, which tests the SSD controller’s ability to organise and prioritise read and write accesses intelligently, we saw that random read speeds jumped from 20.81Mbps to 129.8Mbps, and random write speeds rose from 40.75Mbps to 151.6Mbps. That was slightly behind the Samsung SSD T1, but ahead of the SanDisk Extreme 500 again.

Verdict
Portable SSDs bridge the gap between cheap, simple USB pen drives and bulky external hard drives. That isn’t a huge market segment to fill, but it’s hard to argue with the sheer speed and convenience of these devices once you’re used to using them. Storage capacity is relatively limited and the cost is high, but just like with laptops, a lot of people will find that this is a reasonable and even desirable tradeoff. Eventually, prices will fall and SSDs will be very commonplace. 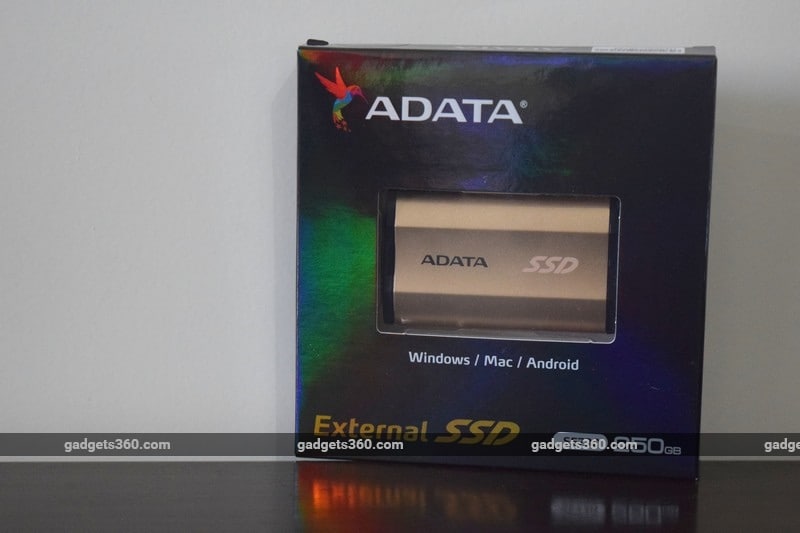 Adata’s offering is one of a very small number of options, and it seems to offer the best of what Samsung and SanDisk showed us with their two differing products. The SE730 is rugged like the SanDisk Extreme 500 but also fast like the Samsung SSD T1. Its printed MRP is significantly lower than both those two, though you can now find them all at equivalent street prices online or at local markets. The SE730’s only flaw is that it doesn’t offer hardware encryption, which both the others do, but if that isn’t important to you, this is a solid all-rounder.

product Adata, a relatively low-profile name in the data storage business, has launched an external SSD with a lot of compelling features at a great price.