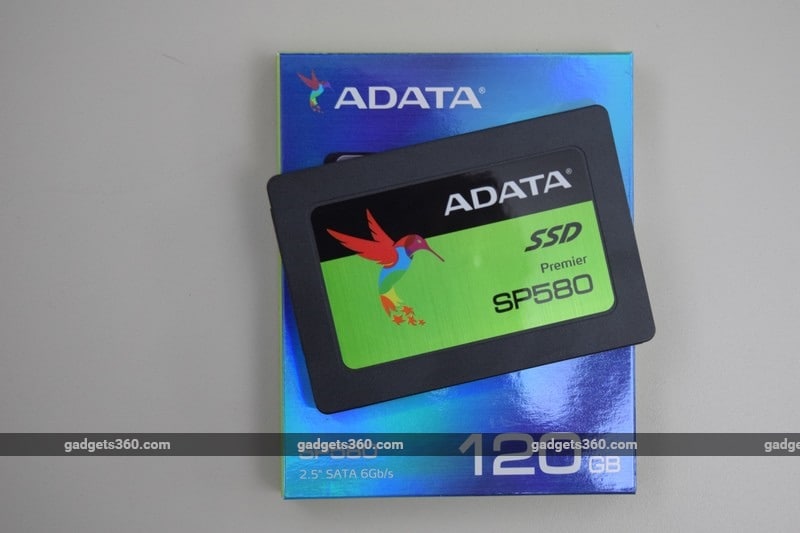 As far as we’re concerned when building a new PC, no budget is too tight to accommodate an SSD. The entry-level price has been driven lower and lower over the past few years, to the point where you can and should seriously even consider upgrading older desktops and laptops. This hasn’t happened only because of the prices of flash memory coming down, but because manufacturers have hit upon new ways to manufacture and package SSDs.

One industry-wide trend has been the adoption of TLC, or triple-level cell flash, which stores three bits of data per cell rather than one or two bits, thus increasing density. More recently, manufacturers have started shipping SSDs with smaller caches or none at all.

Adata’s SP580 uses TLC and does not have a DRAM cache, allowing it to reach a temptingly low price point. Do these factors hurt the drive or simply make it more cost efficient? We’ll find out in our review.

Adata Premier SP580 features and specifications
The SP580 has been launched with capacities of 120 and 240GB, though the latter is not available in India. Even 240GB would be low by today’s standards, but Adata’s choice here makes it clear that the SP580 is positioned as an entry-level option. At higher capacities, it might eat into the market for mid-range and high-end SSDs. Adata has used planar TLC flash, as opposed to the stacked 3D variety which is more expensive to produce and makes more sense when high capacities need to be accommodated.

The first thing that struck us about our review unit was how light it was – at just 47g, it felt almost insubstantial. It’s quite evident that the circuitry is much smaller than the casing, but standards dictate that this is the size a 2.5-inch SSD should be. The casing is mostly plastic, with a metal baseplate. It doesn’t even have any screws holding it together; just plastic clasps. Surprisingly, Adata does not offer the SP580 in the smaller mSATA or M.2 form factors – at least not yet.

Maximum read and write speeds - implying sequential speeds - are rated at 530MBps and 380MBps for the 120GB model and around 10MBps higher for the 240GB model. Adata uses CrystalDiskMark to arrive at its ratings, and we use the same software for benchmarking, which should make for an interesting review. The company’s website and materials repeatedly promote “high TBW” (total bytes written, as a measure of flash memory endurance), but do not put a specific number on that claim. The controller is a similarly unspecified Marvell chip.

To compensate for the lack of a cache, the Adata SP580 can shift itself into SLC mode when stressed. This means that it will write only a single bit to each cell instead of three, to go faster. The drive will then consolidate the data into three bits per cell later, when it is idle. Users will not be aware if or when this is happening.

One relatively new feature is support for DEVSLP, an ultra-low-power SATA protocol. SSDs that support DEVSLP consume less power when in standby and can wake up quickly, which can have a positive impact on laptop battery life and responsiveness.

The only thing that Adata includes in the SP580’s box, apart from a few leaflets, is an adhesive 2.5mm shim. This make the standard 7mm casing as thick as that of a 9.5mm laptop hard drive to make replacements easier.

Adata Premier SP580 performance
CrystalDiskMark 5.0.3 measures random as well as sequential read and write speeds, with or without an extended queue depth. This particular variable allows a PC, or more likely a server, to take advantage of an SSD’s bandwidth by grouping and optimising the order in which read/write commands are passed. In testing, we observed sequential read and write speeds of 490.9MBps and 338.7MBps respectively at the standard queue depth of Q1. Those numbers went up to 535.1MBps and 346.7MBps respectively at a queue depth of Q32. These speeds are what the drive can achieve in a best-case scenario, not necessarily the real world, but they do line up with Adata’s performance ratings.

Verdict
All signs point to the Adata Premier SP580 being a solid value-focused SSD. For many people, this level of performance will be all they need. The SP580 could be an excellent way to give new life to an ageing laptop without spending very much, and it could also serve well as a boot drive for a desktop PC.

However, 120GB isn’t a lot of space, and the 240GB model does not seem to be readily available in India. This is also a low-end SSD and competes with several similar models including market leader Samsung’s SSD 750 Evo, Zotac’s Premium Edition, and Kingston’s UV400. Prices fluctuate regularly, so any of these might be the best value option at the time you are making your purchase decision. If you can spend more, 240GB versions of many of these alternatives are available for under Rs. 5,200. The next higher tier, including Adata’s own SP600 and Samsung’s SSD 850 Evo, can also be found at around the same prices.