The HP Spectre 13 (Review) had its brief moment in the limelight as the world’s thinnest laptop before this accolade was snatched by the Acer Swift 7 when it debuted at IFA 2016 a few months later. Measuring less than a centimetre in thickness, the Swift 7 is the finest Acer has to offer and is targeted at those looking for the ultimate portable Windows laptop.

Learning from its mistakes with the Aspire S13, Acer has built the Swift 7 entirely out of aluminium. It packs in the latest components one would expect of a flagship Ultrabook. In India, this laptop commands a hefty price of Rs. 99,999, which puts it up against similar models of the Spectre 13 and the Dell XPS 13 (Review), which all cost around the same amount.

Bearing the title of the ‘world’s thinnest laptop' does require its share of compromises, but are they worth it? Let’s find out.

Acer Swift 7 design and build quality
Its all-aluminium body makes the Swift 7 sturdy and durable, even though it might look very delicate. The fit and finish of panels is excellent, with no visible gaps around the edges. Matte gold and black accents lend it a premium aesthetic, which is a lot more subtle than HP’s ‘blinged-out’ Spectre 13 look. The base of the Swift 7 is designed smartly so it creates the illusion of being razor thin. The laptop weighs just over 1kg, which makes it great for travel use.

The 13.3-inch, full-HD IPS display has very good colour reproduction and excellent brightness. For indoor use, we usually found ourselves dropping it down to 20 or 30 percent, which was adequate. The screen gets Corning Gorilla Glass 5 protection, which is always good to have. It isn't a touchscreen, which wasn't really a problem for us since the Swift 7 is not a convertible 2-in-1. However, the aluminium reinforced lid is a bit heavy, and tends to throw the Swift 7 off balance when pushed all the way back. 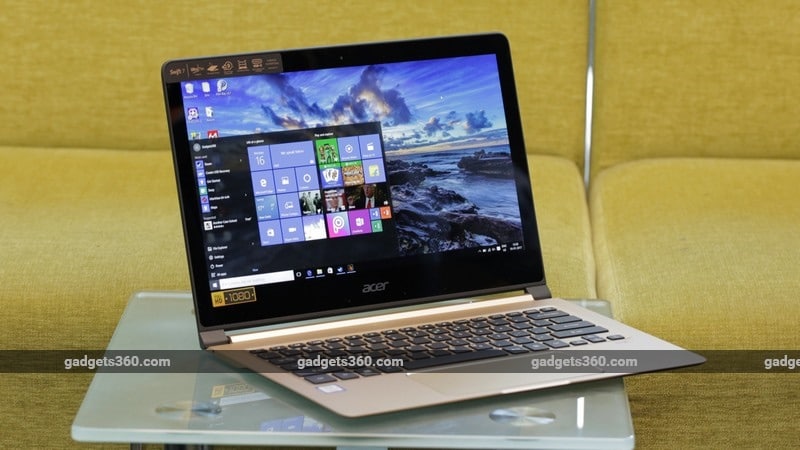 There's plenty of room for your palms on the lower deck despite an overly wide trackpad. We appreciate the attention to detail here, including chamfered edges around the trackpad to match the overall premium theme of the laptop. Despite its size, the surface doesn’t double up as a button and you still have to use only the bottom edges for left and right mouse clicks. The keyboard keys are spaced out well and have good travel for typing. Even the arrow keys are separated nicely. However, in our opinion, Acer has dropped the ball by skipping backlighting for the keyboard, which is not what you expect at this price and might be a dealbreaker for some.

There are LED indicators for battery status and power on the hinge, which are easily visible whether the lid is open or closed. In terms of connectivity, the Swift 7 only has two USB Type-C ports (USB 3.1 Gen 1) and a headphone-microphone combo port. Acer ships a Type-C to Type-A adapter in the box, which is handy for most common USB devices. The Type-C ports only work at USB 3.1 Gen 1 speed (5Gbps) instead of the 10Gbps that's possible with Gen 2. Even though there’s no Thunderbolt 3 controller, Acer says you will be able to use HDMI and other adaptors to get more functionality out of the Type-C ports, but these adapters or cables will of course have to be purchased separately.

The bottom of the Swift 7 is completely sealed with no vents, which is possible thanks to the low-voltage Intel CPU being used. The laptop ships with the Type-C adaptor, a charger with a fixed Type-C cable, a user manual, and a leather sleeve.

Acer Swift 7 specifications
The Acer Swift 7 is powered by an Intel Core i5-7Y54 SoC designed for 2-in-1s and ultrathin laptops. Thanks to a TDP of just 4.5W, it doesn’t need active cooling so you never have to deal with fan noise. This is a dual-core CPU with HyperThreading, and on paper, it sits below the Core i5-7200U in terms of performance. 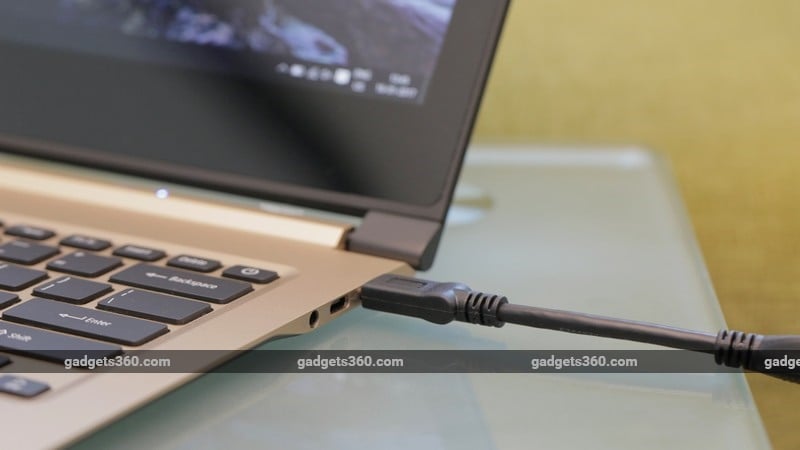 The laptop also has dual-channel 8GB LPDDR3 RAM, a 256GB SATA SSD, Bluetooth 4.0, and Wi-Fi 802.11ac with 2x2 MU-MIMO antennas. The Swift 7 runs Windows 10 Home 64-bit and ships with some Acer utilities preinstalled. Acer Care Centre lets you manage junk files, keep drivers up to date and manage recovery. You also get the trial version of Office 365 and the Dolby Audio app.

Acer Swift 7 performance
Using a Windows laptop without active cooling is something we can get totally used to. The Swift 7 runs pretty cool and completely quiet during everyday use, and despite the all-metal body, we didn’t feel any uncomfortable heat on the palm rests. The area above the keyboard gets much hotter when the laptop is charging, but you won’t this if you’re using it on a desk.

Booting is quick and app performance is generally good for basic tasks such as browsing, working on documents, and video playback. The laptop handles multitasking fairly well, despite it having a low-voltage Kaby Lake CPU. The Swift 7 posted relatively weak benchmark scores, as expected. In PCMark 8's Home, Creative, and Work test suites, we got scores of 2921, 3499, and 2826 respectively. Cinebench R15 returned 27.4fps in the OpenGL test and 182 points for the CPU test. Thankfully, the SSD puts on a good show, with a sequential read bandwidth of 519MB/s and write bandwidth of 484MB/s. 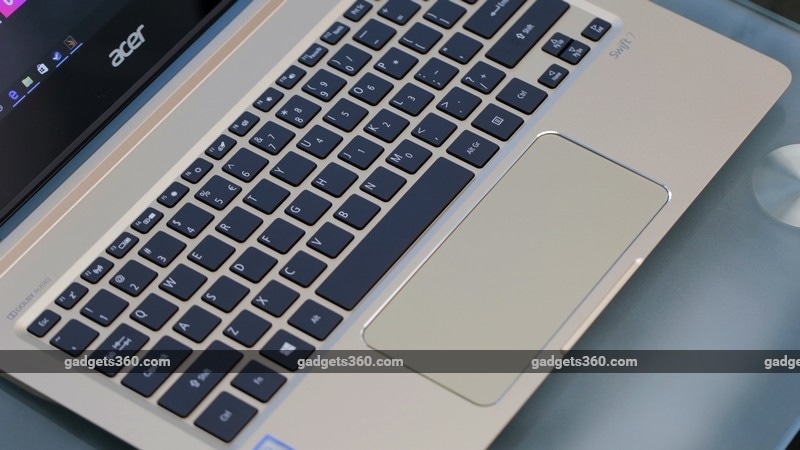 The Swift 7 performs well when it comes to media playback. 4K videos play just fine with very little strain put on the CPU. The IPS display ensures punchy colours and good black levels for your video files. Audio quality through the speakers is pretty good too, thanks to the Dolby Audio enhancement. The bottom-firing speakers do a good job at producing quality audio at decently high volume. The HD webcam is also capable of decent quality, given good ambient lighting.

Battery life is one of the highlights of the Swift 7, and the 4-cell Li-ion unit managed to power the laptop for 3 hours and 7 minutes in Battery Eater Pro, which is very good. With normal usage, we got nearly 8 hours of runtime.

Verdict
Acer is selling the Swift 7 in select stores and on Flipkart at Rs.99,999, making it line up against the Dell XPS 13 and the HP Spectre 13, both of which have now been refreshed with Kaby Lake Core i5 processors but cost around Rs.10,000 more than their original prices. All things considered, you're probably better off putting in that extra money and buying either the Dell or HP. This doesn’t mean the Swift 7 is a bad product but we feel that it simply isn't competitive enough.

Acer wins points for its noise-free design and great battery life, but the Swift 7 also has some glaring shortcomings such as no keyboard backlighting and the lack of USB 3.1 Gen 2 ports, if not Thunderbolt 3. You also get slightly more powerful CPUs if you choose either the Dell or the HP models, compared to the low-voltage one in the Swift 7.

Acer’s Swift 7 is a brilliant showcase of what can be achieved with today’s technology, but practically, its compromises are a bit too severe to make it worth recommending over its rivals.

Further reading: Acer Swift 7, Acer Swift 7 review, Acer Swift 7 price, Acer Swift 7 price in India, Acer Swift 7 specifications, Acer Ultrabook
Roydon Cerejo Email Roydon Roydon Cerejo writes about smartphones and laptops for Gadgets 360, out of Mumbai. He is the Deputy Editor (Reviews) at Gadgets 360. He has frequently written about the smartphone and PC industry and also has an interest in photography. With over a decade of experience covering the consumer technology space, he is also an avid sci-fi movie and TV show geek and is always up for good horror flick. Roydon is available at roydon@gadgets360.com, so please send in your leads and tips. More
Xiaomi Mi 6 Rumours Point to 3 Variants; MWC 2017 Launch Likely
2 Days Ahead of January 19 Flash Sale, Nokia 6 Registrations Cross 1 Million

product The Acer Swift 7 is a striking and well-crafted Ultrabook with a few caveats, some of which might make you want to consider its rivals instead.