Most people buying a laptop for home use wouldn’t typically pay too much attention to the weight, but if you’re going to be carrying it around with you on a daily basis, then this would matter a lot. Hybrid tablets such as the Microsoft Surface Pro have tried to cater to this niche segment of users looking for maximum portability, and although they do fit the bill to an extent, they are either quite expensive, or require compromises in terms of screen size, processing power, and keyboard ergonomics.

Laptops such as the Apple MacBook and Asus ZenBook UX390UA, to name a few, come close to achieving tablet-like weight at under 1kg, but a 12-inch screen can be a little limiting, especially if you’ll be dealing with spreadsheets or making presentations all day long. This is where Acer’s new Swift 5 laptop comes in. It’s a 14-inch laptop that weighs just 970g. Armed with one of Intel’s latest 8th generation CPUs, and with modern features including a fingerprint sensor and a Type-C port, is this the best new ultraportable laptop? Let's find out.

There’s no way of guessing the weight of the Swift 5 just by looking at it, since it looks like a regular 14-inch laptop. It’s not very slim, and still measures about 14.9mm in thickness, thanks to which Acer has managed to retain full-sized USB ports. If slimness is what you’re after, then you should keep an eye out for the company’s new Swift 7 laptop which was announced at this year’s CES. The secret to the Swift 5’s surprisingly low weight is the use of magnesium for the chassis. In fact, the Swift 5 uses two alloys - a magnesium-lithium alloy for the lid and the base of the laptop, and a magnesium-aluminium alloy for the palm rest area.

At first, these could be mistaken for plastic due to the low weight and a hollow sound when you tap the lid or the bottom of the laptop. However, the base doesn’t flex much even when you apply force, and the lid offers excellent protection for the display. Despite our best efforts, we weren’t able to warp the screen when we applied pressure from the back of the lid. This means that despite its dainty feel, the laptop should be able to cope well with the rigours of everyday use. 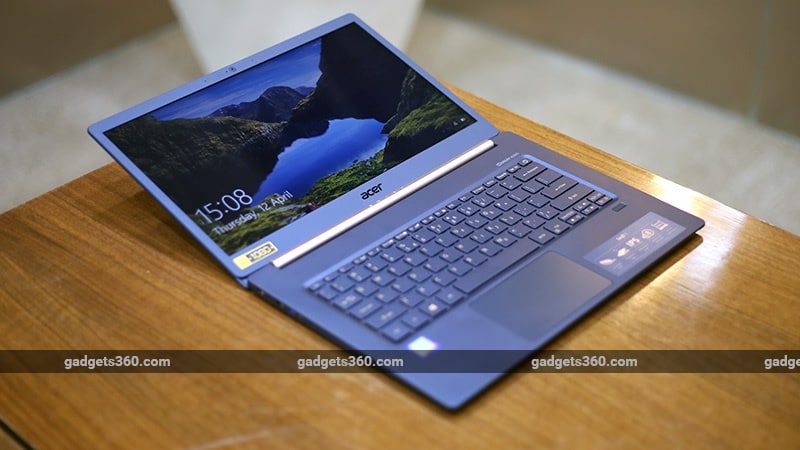 The single, large hinge offers good torsion and easily holds the lid in place at pretty much any angle you choose. The lid on the Swift 5 can open all the way back to 180 degrees, giving you good flexibility for different usage positions. We really like the shade of blue used here, and the matte finish doesn’t attract too many fingerprints. The subtle gold accents for the brand logos, hinge, and letters on the keys give the Swift 5 a sophisticated look.

The display has thin borders on three of its four sides, and there’s just enough room on the top for the HD webcam. The display itself is a 14-inch full-HD IPS panel, which has a glossy finish and also supports touch input. Reflections can be a bit of an issue when working outdoors or even indoors, with overhead lighting. Like most Acer laptops we’ve come across so far, the maximum brightness level is just about adequate enough to deal with reflections but we could have used some more headroom. Touch response is also decent, but since this device doesn’t convert all the way into to a tablet, we seldom ended up using it.

Many people (us included) will appreciate the inclusion of full-sized USB ports. There are two Type-A USB 3.0 ports along with a Type-C (USB 3.1 Gen1) port. You also get an HDMI video out, a microphone and headphones combo socket, a Kensington lock slot, and two LED status lights for power and charging. The lack of a physical Ethernet port is unfortunate but surprisingly, Acer has ditched the SD card slot too, which is a big disappointment.

The chiclet keys are well spread out and have good travel. There’s a single level of white backlighting which evenly lights up all the letters on the keyboard. The spacing is also good for the most part, except for the direction keys, which feel cramped. The Home/ Pg Up and End/ Pg Down buttons are too close to the left and right arrow keys, and when when moving the cursor around in text documents, we often ended up hitting the wrong ones. 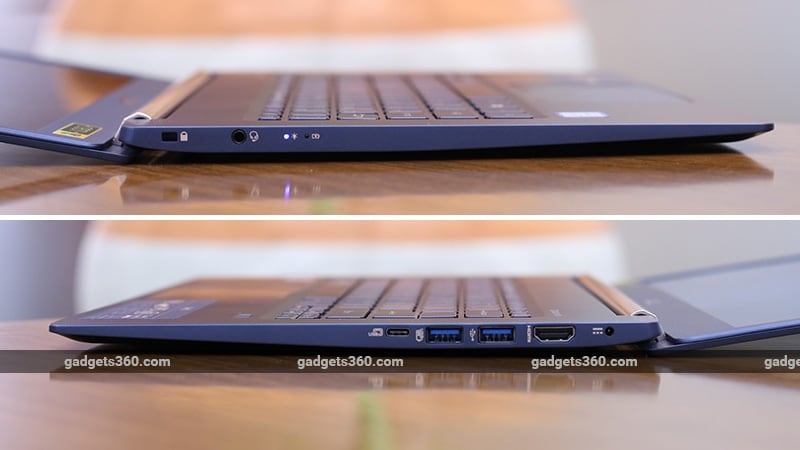 The trackpad is wide and its surface is smooth, however tracking is not very good. The mouse pointer felt jumpy, and single- and double-taps often didn't register very well. Gestures in Windows 10 worked fine, though. The Swift 5 also has a rectangular strip for a fingerprint sensor just below the keyboard's arrow keys, and it worked well with Windows Hello. Overall, the Swift 5 is built well and we love how incredibly light it is. You get only a simple charger in the box, along with some documentation for the warranty, and a user manual.

In India, the Acer Swift 5 is available with either a Core i5 or Core i7 processor, and with us today is the base model with an Intel Core-i5 8250U CPU. There’s 8GB of RAM that’s soldered onto the motherboard, and you get 256GB of SSD storage. In comparison, the Core i7 version has a 512GB SSD and the same amount of RAM as the other model. Other specifications include Wi-Fi 802.11 ac, Bluetooth, an HD webcam, and stereo speakers with Dolby Audio enhancement.

The Swift 5 ships with the 64-bit version of Windows 10 Home, and the many Windows Store apps that are typically preinstalled on most Windows laptops. There’s also a limited-time subscription to Norton Security and a full version of Microsoft Office: Home and Student 2016. Acer has its own apps too, such as Care Centre for checking the health of the system and updating drivers; Power Button which lets you customise what happens when you press the physical power button on the keyboard; Quick Access, to toggle features such as a blue light filter and USB charging in standby; and Acer’s own Color Intelligence feature which changes the colour temperature of the screen based on what you're doing. 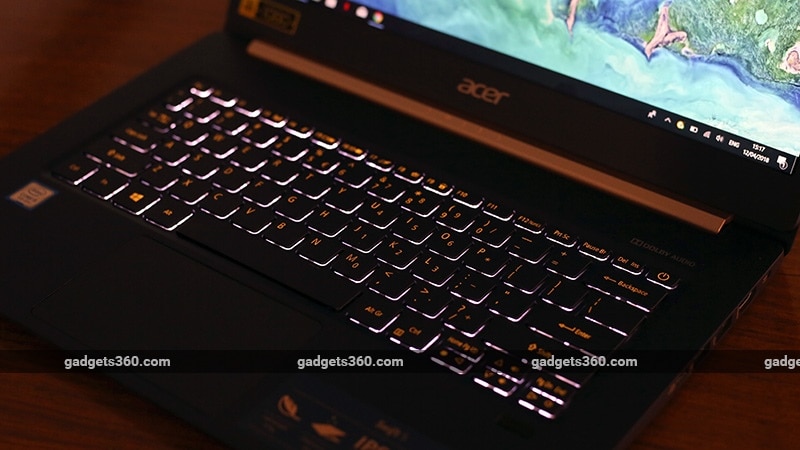 We used the Swift 5 for several days and its low weight amazed us every time we lifted it. We got similar reactions from pretty much everyone who has picked it up, since it looks like any common laptop. We like that the lid didn't wobble too much when we used it on our lap in a moving vehicle, so we could get some work done during our commute. We found the keyboard to be quite comfortable even for longer typing sessions.

The Swift 5 has plenty of vents on the bottom, and an exhaust just in front of the hinge. This arrangement works well in keeping air flowing across the major components, and we didn’t find the base getting too hot with normal usage. It obviously does get a bit warm when charging, and the exhaust fans are audible when you're playing a game or using a CPU-intensive app, but other than that, it runs fairly cool and quiet.

We didn’t face any issues with app performance, and booting was also quick thanks to the SSD. Our review unit's Micron 256GB SATA III SSD gave us a physical drive score of 486MBps in SiSoft Sandra. While this is good, it’s slower than typical NVMe SSDs. Other synthetic test results were decent too. For instance, we got 3,976 points in 3DMark’s Sky Diver benchmark, and scores of 3,533, 4,670 and 3,322 points in PCMark 8’s Home, Creative, and Work test suits. In fact, most of the benchmark scores we got with the 8th Gen Core i5 CPU were close to what Intel's 7th Gen Core i7 CPUs in the same TDP range usually delivered. 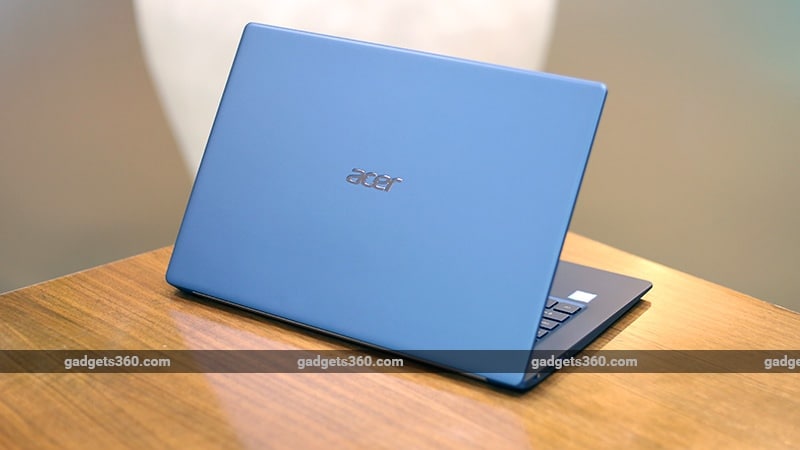 Graphics performance was okay as well. In synthetic tests like Cinebench R15, we ended up with an OpenGL score of 48.3fps. However, with actual games, the integrated Intel UHD Graphics 620 GPU just isn’t powerful enough to run 3D games smoothly. We tried Far Cry 4 which is quite scalable, but on the Swift 5, even with the resolution dropped down to 1366x768 and using the 'Low' graphics preset, we only managed to average 12fps. To be fair, the Swift 5 isn’t exactly designed to be a gaming laptop, so we won’t fault it much here.

It does do well with media playback. The IPS display produces rich colours and viewing angles are also good. 4K files played well. Audio performance is good, and even though there’s not much bass, the volume level does get quite high and dialogues in videos are crisp. The Dolby Audio app helps boost audio levels further. The webcam can capture 720p video but the quality isn’t very good. Under artificial lighting, there’s a fair bit of visible chroma noise in the darker regions of the footage.

In an effort to keep the weight down, the Swift 5 doesn’t have a very large battery. We found that the 2-cell battery usually delivered only about five hours of runtime on average, and that was with just regular Web browsing and working on Google Docs for the most part. We had the keyboard backlight on at all times, and we often needed to push the display brightness up to 90 percent to deal with reflections. Surprisingly, Battery Eater Pro gave us a pretty good runtime of 2 hours, 52 minutes. With its 45W charger, it generally takes about an hour and a half to fully charge this laptop.

Verdict
The Acer Swift 5 is one of the only laptops in India with a 14-inch display that weighs under 1kg, which makes it a bit special. At around this price, you can also find other Ultrabooks such as the Dell XPS 13 9360, Lenovo Ideapad 720 Slim, or even the Asus ZenBook UX430UA - all of which share similar specifications but weigh a bit more than 1kg. If weight is an important factor in your buying decision, it will be really hard to beat the Swift 5. Keep in mind that battery life isn't great, so it won’t be easy to get through a full workday on a single charge unless you use this laptop very conservatively. The trackpad is a bit fiddly too, and there’s no SD card slot.

If you can live with these shortcomings and are only concerned about getting the lightest laptop without spending more than Rs. 1,00,000, then the Swift 5 could be a great option.

Further reading: Acer Swift 5 review, Acer Swift 5 price, Acer Swift 5 price in India, Acer Swift 5 specifications
Roydon Cerejo Email Roydon
Roydon Cerejo writes about smartphones and laptops for Gadgets 360, out of Mumbai. He is the Deputy Editor (Reviews) at Gadgets 360. He has frequently written about the smartphone and PC industry and also has an interest in photography. With over a decade of experience covering the consumer technology space, he is also an avid sci-fi movie and TV show geek and is always up for good horror flick. Roydon is available at roydon@gadgets360.com, so please send in your leads and tips. More
Facebook CEO Zuckerberg Says Regulation Inevitable. Is Congress Up to It?
Gmail to Get New Design, Smart Reply on Web; Android APK Suggests Enhanced Assistant Capabilities
product Acer Swift 5 is one of the lightest 14-inch laptops in the market, and it delivers good performance plus a comfortable keyboard. We review. 4 out of 5 stars