Share on Facebook Tweet Snapchat Share Reddit Email Comment
It was touted as a no frills, always connected, economy notebook, but perhaps it was India's low Internet penetration rate prevented Google and OEMs to launch the Chromebook in India. Almost three years after its initial release, the Chrome OS-powered notebook has finally made it to our shores.

We used the Acer C720 Chromebook, an 11.6-inch notebook for a few days and here's a summary of our experience using it as our primary computer.

Build, Design, Screen and Keyboard
The Acer C720 is no looker when it comes to hardware design but thanks to its compact form factor it looks a neat utilitarian device that you can easily lug with you. Having said that, it's not very light weight and comes in a thick frame.

On the outside, the C720 features a grey coloured plastic lid with matte finish, with a plastic bottom that sports a darker shade and features the cooling vents and screws to open the chassis (not recommended unless you know what you are doing).

Open the lid, and you see an 11.6-inch matte display that sports a resolution of 1366x768 pixels and brightness levels of 220 nits. The anti-glare screen offers wide viewing angles and colours don't look washed out until you really turn the display around. The display offers good levels of brightness, contrast and colour and videos, images and text look sharp, clear and crisp. The display is encased in a frame that sports a black coloured plastic bezel and has a glossy finish. The keyboard sits on a deck that looks similar to the Chromebook's lid, in both colour and finish.

A 720p webcam also sits at the top of the upper lid and is functional, at best.

The Acer C720 features a chiclet or island-style keyboard and doesn't include the function keys that are present in most Windows and Mac keyboards. Instead, we have special keys for going back and forward, reloading a page, managing windows, controlling brightness and sound and turning the Chromebook off and on.

We found the keyboard to be decent though our typing speed was not as fast as it's on the MacBook Air - that would perhaps change if we spent more time with the machine. The Chromebook's trackpad was also responsive. There's no support for gestures like 'pinch to zoom' though. 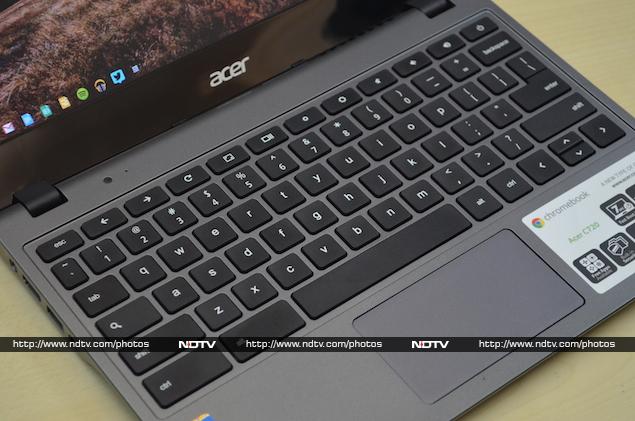 The right hand side of the Chromebook features a card reader slot, a USB port and a Kensington lock slot, while the left hand side sports a 3.5mm headphone jack, a USB 3.0 port, and HDMI port and a charging port. The front edge features two LED indictors for charging and system use.

Overall, the Acer C720 Chromebook is a well built machine and exudes a feeling of durability.

Software
The Acer C720 Chromebook is powered by Google's Chrome OS, which is based on Linux but doesn't offer full fledged apps that we see in Linux distros like Ubuntu. In fact, Chrome OS comprises mainly of the Chrome browser and a desktop that features an app launcher and indicators and toggles for some settings such as Wi-Fi, user account, Bluetooth, Sound and Settings. It even lets you change the desktop wallpaper. 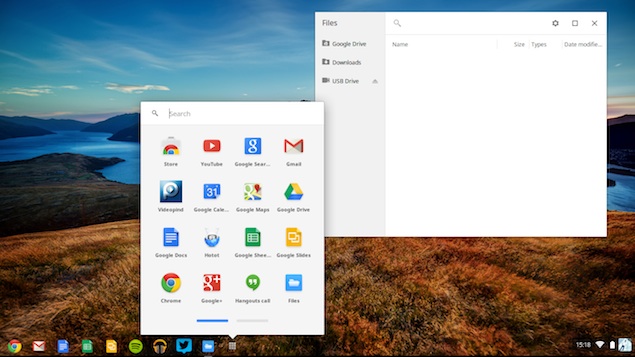 The OS supports multiple users and after logging in with your Google credentials, the notebook syncs your bookmarks, extensions, apps, and other browser data. You can also restrict logins to select user(s).

Barring some native apps like the Calculator, viewers for pictures and videos, and a basic music player, everything runs inside the Chrome browser as a web app. Although you'll be able to open documents, spreadsheets, presentations and PDFs even if the Chromebook is offline, you'll need Internet connectivity to create new ones, at least for the first time (or if you clear browsing data). The OS Settings are also displayed in Chrome. 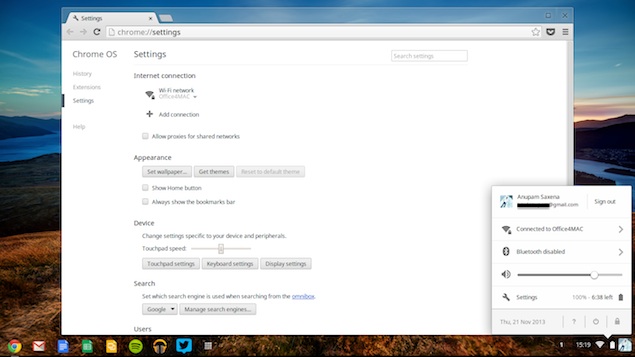 If a service has a web app, you'll surely be able to run it on the Chromebook, if not, then you're out of luck. For instance, you can't run Skype.

The latest iteration of Chrome OS does allow you to pin web apps to the launcher and choose if you want to open them as standard browser tabs or as independent full screen videos, maximised, to emulate the experience of a native app.

The Chrome web store even offers offline and desktop apps including the new Google+ Photos app, Autodesk Pixlr Touch Up, Kindle Cloudreader, Google Drive, and games like Angry Birds and Cut the Rope. 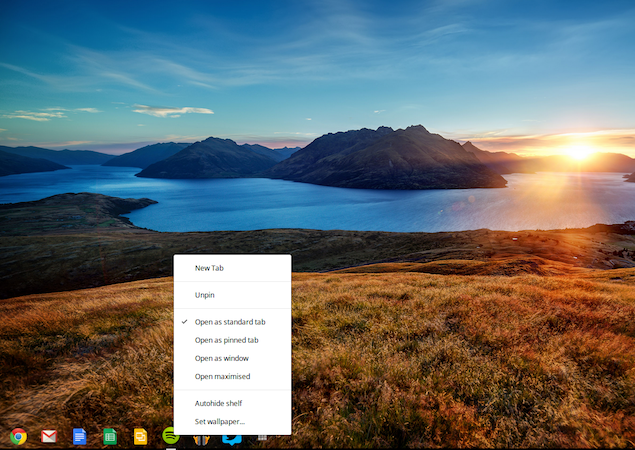 It won't be wrong to say that the Chromebook essentially revolves around Google's apps and services. Google even offers 100GB of free space in Google Drive, its cloud storage and sync service, for a period of two years. You get access to Google's online office suite, with Google Docs, Sheets and Slides. Google Play Music (without access to content), Google Play Movies and Google Play Books are other services that are available.

But then these services are available to users of Google's Chrome browser, as well.

If you're not deeply invested in Google's ecosystem, and don't want to store all your documents in Google's servers, then the Chromebook is certainly not for you. 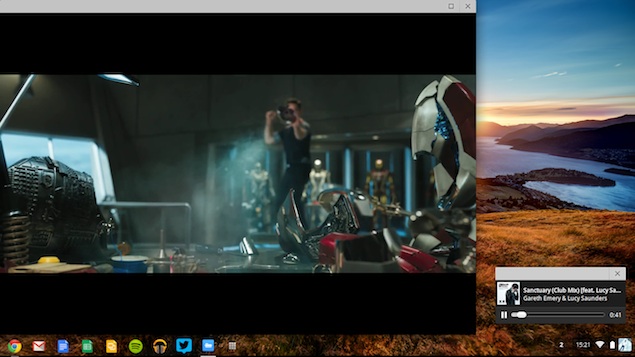 It comes with a meagre 16GB internal storage out of which almost 10GB is available to the end user.

Performance
The Acer C720 Chromebook is powered by an Intel Celeron 2955U, 1.4GHz dual-core processor which is based on Intel's Haswell architecture, focusing on power optimisation. It comes with 2GB of RAM.

One of the major advantages of this Chromebook is its quick boot-up time. It booted up in just 7 seconds thanks to the light weight operating system, and the underlying SSD storage.

We did not encounter any lag while browsing the web, simultaneously playing online videos and HTML5 games and editing documents, with around 10-15 open tabs.

In our use, the Acer C720 Chromebook lasted seven hours with mixed usage including one to two hours of watching online video, streaming music, and browsing the Web.

We were able to play HD videos of all file formats as well as music tracks. The built-in speakers offer loud sound output at high volume levels, though clarity reduces as you pump up the volume. 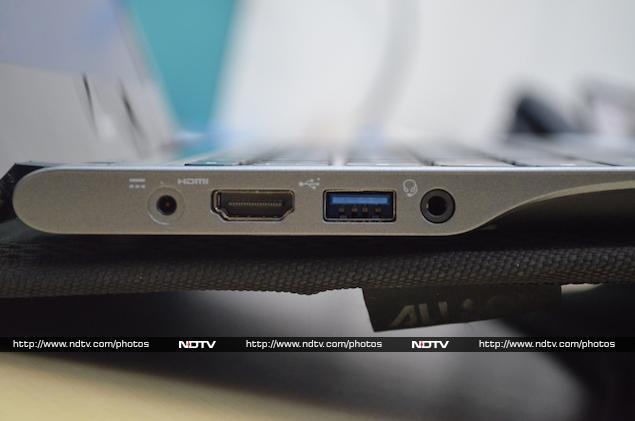 We miss the lack of 3G connectivity. We wish Acer would have included a SIM card slot as Wi-Fi connectivity in Indian cities is still spotty.

Unless you carry a Wi-Fi hotspot device with you or own a USB based 3G dongle that the Chromebook supports, you won't be able to access your own data which is residing in Google's cloud. We were able to use a Tata Photon Max EVDO USB dongle with the Chromebook without any hiccups, though we did need to find the configuration options in the Settings.

Verdict
While it certainly won't appeal to power users for use as a primary computing device, the Chromebook offers close integration with Google's services and is ideal if you mostly use online services and are never far way from an Internet connection. However, if you want a full fledged computing experience, and still want access to Google services and web apps, you can just fire the Chrome browser on your PC or Mac. At a price of Rs. 22,999, the Acer C720 Chromebook doesn't cost a bomb but it ultimately boils down to how you use your computer. 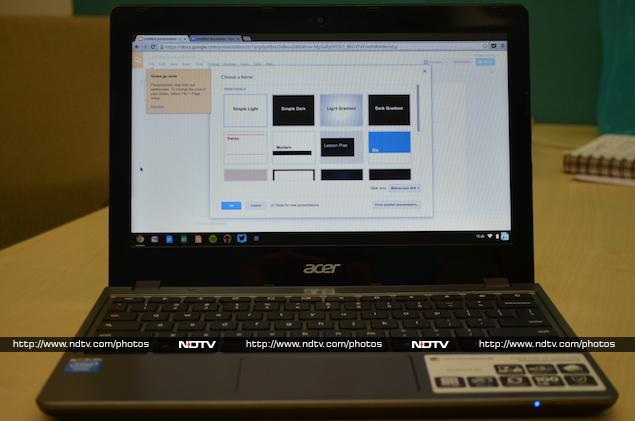 Even as a secondary web browsing device, Apple's iPad offers a richer app-ecosystem and is more portable, combined with a foldable keyboard cover. Spend a few thousand rupees more and you can get a decent entry-level Windows PC.

It's still hard to recommend the Chromebook as a standalone computer as India's Internet infrastructure needs to evolve a bit more before we start relying totally on a cloud based set-up.
Comments

product The Acer C720 is one of the first Chromebook devices to hit the Indian shores. We try to find out how it fares as an everyday computing device.