In 2017, Acer is focusing its efforts on two of the most rapidly growing segments in the tech industry: gaming and VR. For gaming, the company has recently unveiled a brand new line of gaming laptops and monitors, while in VR, it plans to get in on the ground floor in the commercial space through its StarVR effort and is among the first OEMs to have a Windows 10 Mixed Reality headset coming later this year.

However, there’s still some time before Acer’s latest gaming machines make their way to India so for now, we’ll be taking a look at one of its more affordable options: the Acer Aspire VX 15. Priced under Rs. 90,000, the VX 15 seems to hit the sweet spot in terms of price vs performance. Let’s see how good of a value proposition it really is.

The Aspire VX 15 has an eye-catching design, which is something we really like. Thankfully, Acer has done this without having to resort to decorating the laptop with LEDs. The rear of the laptop is one area that really stands out as the exhaust vents mimic the look of a sports car. The red accents on the black body also add to the visual appeal. The sides of the VX 15 is designed in way that creates an illusion of it being slim, when it actually isn’t. It’s not excessively bulky either but you will feel the heft of the 2.5kg when you carry it around.

The textured lid is easy to keep clean and offers a decent level of protection for the display. There is a bit of flex but not much, despite the Aspire VX 15 being made of plastic. There are two reflective red strips placed on either side of the logo to go along with the gaming motif. The hinge is sturdy and provides good torsion even when the display is tilted back to about 150 degrees. 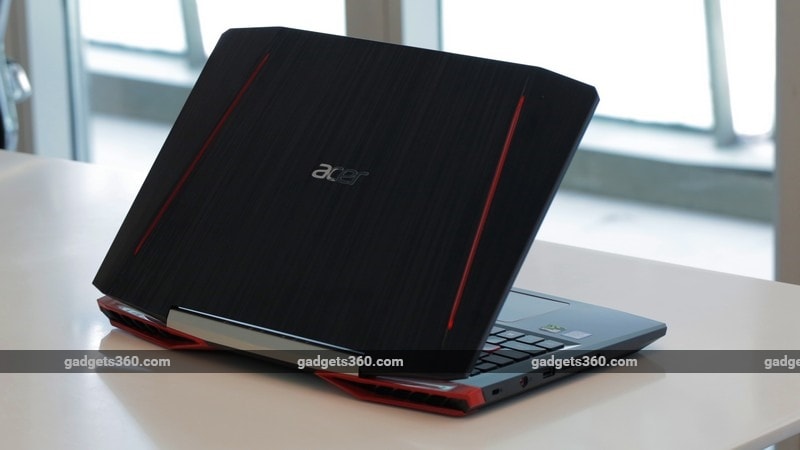 The screen on the Acer Aspire VX 15 is a 15.6-inch IPS panel with a full-HD resolution that produces sharp images and text. However, the display doesn’t feel vibrant as colours come across a bit dull and brightness levels are quite low. We often found ourselves having to max out the display brightness, even indoors.

The keyboard area is spacious enough to accommodate a number pad alongside the standard island styled keys. The keys have a very mild concave design so your fingers land comfortably on them when typing. Key travel and tactile feedback is also good and they don’t make a lot of noise when typing. Acer has also given you a generous palm rest area and a large trackpad. The latter provides smooth tracking and Windows 10 gestures work well.

In terms of physical connectivity, the Aspire VX 15 comes with a good set of connectors that includes two USB 3.0 ports, a USB 2.0 port, HDMI, Gigabit LAN, headphone and microphone combo port, SD card reader and a USB 3.1 Type-C port (Gen 1). According to Acer, the Type-C port can be used for video output too. There’s no optical drive here, which is not a total loss but given the thickness of the laptop, we would have expected it. 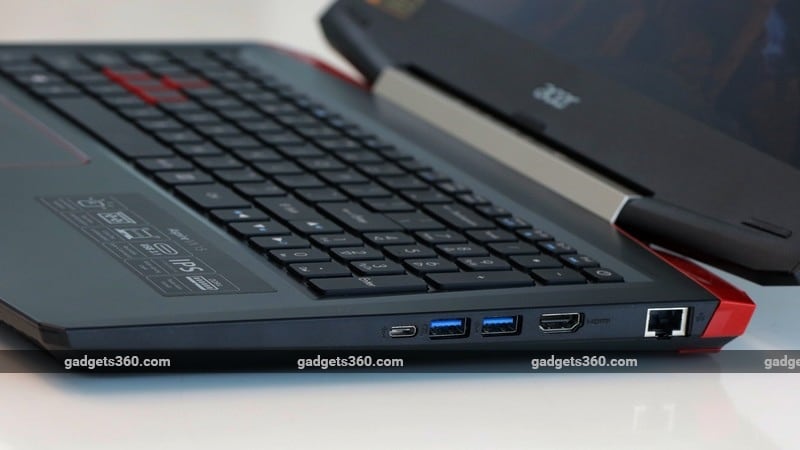 There are LED status lights for power, charging and hard drive activity, placed in the front. The stereo speakers also face forwards on either end of the laptop, so you’ll rarely block them even if you use it on your lap. Flipping the laptop over reveals more vents for the intake of cool air along with four large rubber feet. Enthusiasts will be disappointed to know that there isn’t any quick-release hatch to access the RAM and hard drive here. Doing so will require you to take off the entire bottom panel, which isn’t the easiest thing to do so we suggest taking the Aspire VX 15 down to an Acer service station to perform upgrades.

The 3-cell, 53Wh battery is also sealed inside so it’s not easily swappable. Our unit was delivered to us without any packaging or bundled contents, other than the 135W charger. But you should expect the typical manuals and warranty information in the box when you buy it.

What we like about Acer laptops is that you always tend to get better specifications for your money, compared to what the competition would offer and the VX 15 is no exception. The CPU is an Intel Core i7-7700HQ 7th gen. quad-core chip with HyperThreading, which is usually found in most premium gaming laptops today. There’s also a single stick of 8GB of DDR4 RAM, which can be upgraded up to 32GB. For storage, we have a Kingston 128GB M.2 SSD and a Toshiba 1TB mechanical drive running at 5400rpm. The latter is useful for installing games but won’t be nearly as fast as having the games on the SSD. Finally, we also have Nvidia’s GeForce GTX 1050 graphics card with 4GB of DDR5 memory. Other specifications include Bluetooth 4.1, dual-band Wi-Fi a/b/g/n/ac with 2x2 MIMO antennas and a HD webcam. 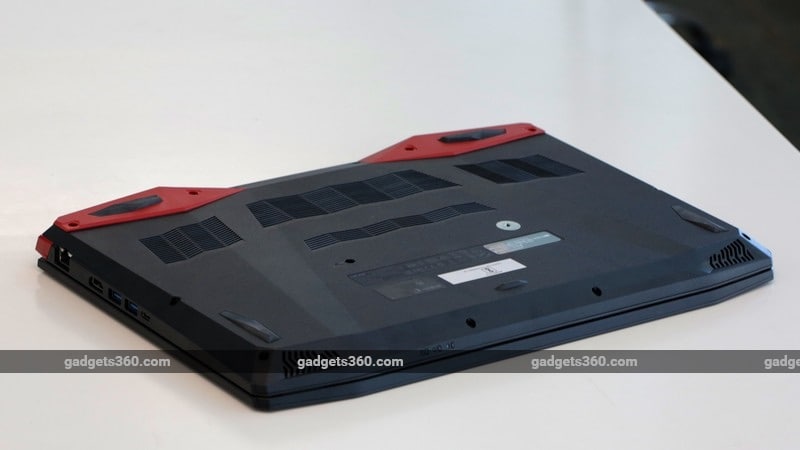 The Acer Aspire VX 15 ships with Windows 10 Home 64-bit along with some pre-installed software like a 3-day subscription of Norton Security, trial version of Office 365 and some universal apps like Netflix, Kindle, Ebay, Agoda and Amazon. Acer also has its own suite of apps like Acer Portal for its BYOC (Build Your Own Cloud) apps; Care Centre lets you monitor the system and check for driver updates; and Acer Collection, which gives you a list of curated apps from the Windows Store, across categories.

Since the OS is installed on the SSD, general system and app performance is very good. The laptop boots up quickly and handles multitasking very efficiently. Loading apps or files from the mechanical drive takes some time, especially if the drive is idling an has to spin up but performing the same task from the SSD is near instantaneous. The laptop also runs silently and doesn’t heat up for regular workloads. The heat starts to build during gaming but thankfully, this is kept away from the palm rest area and the left part of the keyboard, where you’d typically have your fingers when playing a game. 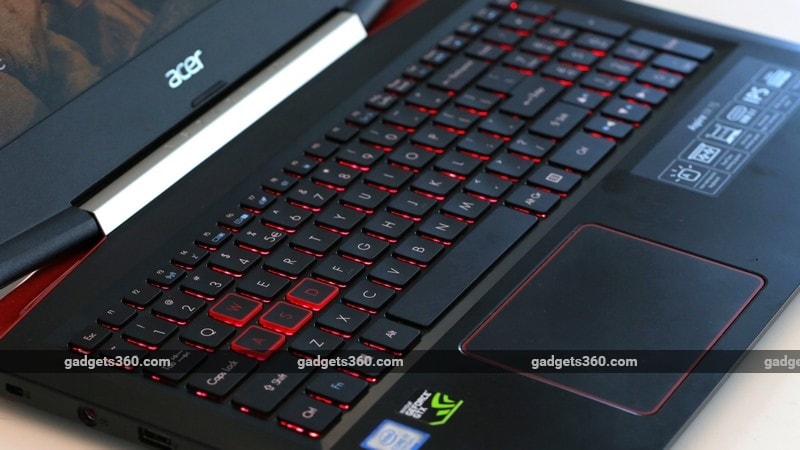 The key cluster to the right of the trackpad (and before the number pad) gets really hot. The bottom part of the laptop gets warm but nothing too uncomfortable when using on your lap. The dual fans near the exhaust work well and aren’t noisy at all, even when they are working at full capacity. The HD webcam is certified for Skype for Business, but we found the quality to be pretty sub-par. Even in a well-lit room, there’s plenty of visible noise on and around your face. It does support face recognition though so it will priorities getting the exposure right for your face, over the surroundings.

The speakers are another highlight here, which get incredibly loud thanks to the Dolby Audio enhancements. We found this particularly good on Acer’s Predator 15 too and we’re happy to see Acer bringing this tech to its more affordable models.

To gauge the Acer Aspire VX 15’s actual gaming potential, we ran through our list synthetic and real world gaming tests and were pretty happy with the results. In 3DMark Fire Strike, we got a score of 5589 while PCMark 8 returned 3562, 4354 and 3217 points for the Home, Creative and Work test suites, which are pretty good numbers. In the multi-threaded CPU test of Cinebench R15, we got a score of 723 points and a graphics score of 98.3fps, in the OpenGL test.

Moving onto actual gameplay, we begin with Rise of the Tomb Raider, which we ran at the native resolution, with DirectX 12 and the Very High preset. In the in-game benchmark, we got an average of 32fps but during actual gameplay; the frame rate was hovering more around 25-28fps, with some dips to 18fps. This fluctuation didn’t help during intense battles so we were forced to drop the graphics quality a bit for smoother gameplay.

Deus Ex: Mankind Divided is another very taxing game for a graphics card, and here with the High preset and 1080p, we managed to average 29fps. In Doom, we used the Foundry level to benchmark our run and even with the Ultra preset, we easily managed to average 55fps.

Next up is Metro Last Light Redux, which is a very demanding game, graphically. With the resolution set to 1080p, High quality preset and Tessellation set to Normal, we averaged around 33fps, which is not bad. Unfortunately, Ashes of the Singularity kept crashing on the loading screen, despite multiple driver updates, which is a shame as it’s a good test for the new DirectX 12 API.

In Far Cry 4, with the Very High preset, we were averaging about 47fps. In all the games we tested, we never had to drop the resolution lower than the display’s native one, which is good thing. For more demanding titles, you’ll probably have to sacrifice some level of eye-candy for smoother framerates but we think that’s not a big compromise, considering the price of the laptop.

Gaming laptops never boast of battery life for good reason – it’s practically impossible to get a day-long battery life with all these power hungry components inside, while still keeping portability in mind. The Acer Aspire VX 15 ran for 1 hour and 26 minutes in our Battery Eater Pro test, which is less but is still a shade better than some of the recent gaming laptops we tested. With regular use, we managed to get about 4-5 hours of runtime, which is not enough for a full work day. 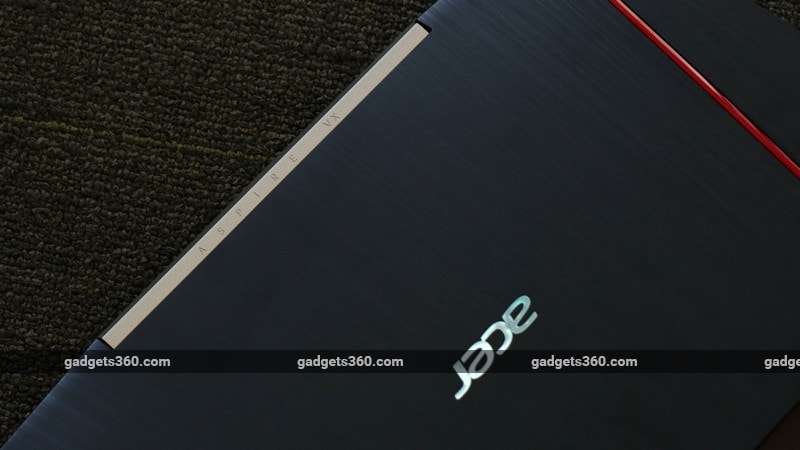 Verdict
The Acer Aspire VX 15 might not be the most feature-rich gaming laptop out there, but for the asking price, it’s really tough to beat. The CPU and GPU inside are powerful enough to handle many of today’s games at 1080p with ease and should have some leg room for future titles too. The cherry on the top is that all this power will cost you just Rs. 87,999, maybe even lesser on online stores. It also offers much better value compared to the MSI GP62 7RD Leopard Pro gaming laptop we recently tested, which shares pretty much the same guts as the VX 15.

Of course, at this bargain price comes some compromises. For instance, the display doesn’t get very bright and the colours feel a bit dull at times. The webcam isn’t very good either so if you do a lot of video chatting, this isn’t the best tool for the job. Finally, as good as the laptop looks, it’s still quite heavy and can be cumbersome to carry around.

All things considered, if you’re out in the market for a gaming laptop with a tight budget in mind, we’re yet to see a better deal than the Aspire VX 15.

Further reading: Acer Aspire VX 15, Acer VX15, Acer VX 15 price, Acer VX 15 price in India, Acer VX 15 review, Acer VX 15 specifications, Acer gaming laptop
Roydon Cerejo Email Roydon
Roydon Cerejo writes about smartphones and laptops for Gadgets 360, out of Mumbai. He is the Deputy Editor (Reviews) at Gadgets 360. He has frequently written about the smartphone and PC industry and also has an interest in photography. With over a decade of experience covering the consumer technology space, he is also an avid sci-fi movie and TV show geek and is always up for good horror flick. Roydon is available at roydon@gadgets360.com, so please send in your leads and tips. More
Facebook 'Dark Ads' Taken on by UK Campaigner During Election
Blame Game for Cyber-Attacks Grows Murkier as Spying, Crime Tools Mix

product The Acer Aspire VX 15 gaming laptop brings offers some of the best hardware for a very tempting price. 4 out of 5 stars