Intel’s concept of the ideal portable PC has undergone various changes over the years. It started out with just thin and light laptops, then became Ultrabooks, and is now much more about the hybrid 2-in-1s that we see today. However, one thing that has stayed somewhat constant is the pricing - most of the good ones still cost a pretty penny.

We recently tested one model at the extreme end of the spectrum; HP’s anorexic Spectre 13, which is easily one of the most luxurious laptops around. Then there’s Dell’s XPS 13 line of laptops and of course, Apple’s MacBook Air.

However, Acer is on a mission to make high-end Ultrabooks relatively more accessible with the new Aspire S13. Announced this April, the S13 is now available in India at a very tempting price, given its specifications. This involves certain compromises, so is the Aspire S13 worth it overall? Let's find out.

Acer Aspire S13 design and build
Acer is no stranger to the world of Ultrabooks. Its Aspire S7 series has been quite popular for many years. The S13 is pretty similar in that respect, weighing around 1.2kg and measuring roughly 15mm in thickness. We got a white unit for review which we don’t recommend buying as it picked up dirt and grime easily, which we found tough to clean. Actually, it’s the plastic lid that’s prone to this, more than the base. While the white model could look good, our unit showed signs of discolouration. The S13 is also available in black. 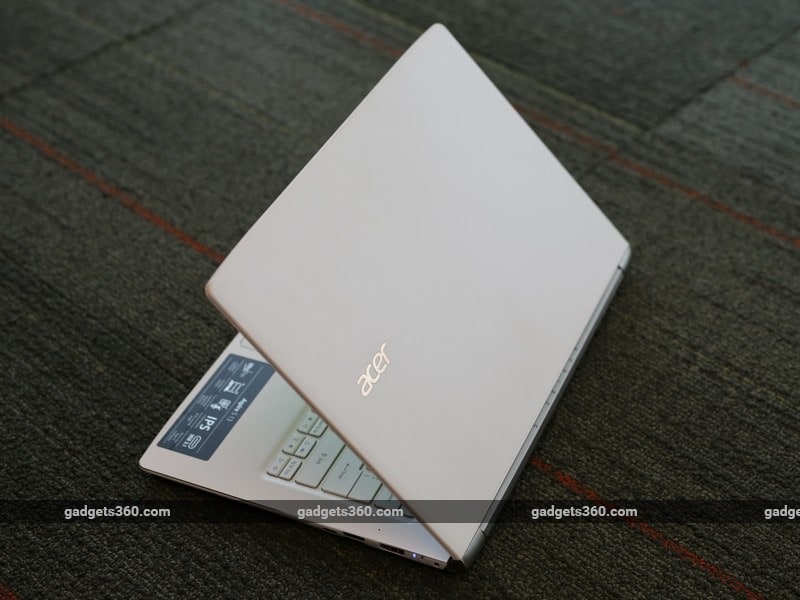 Chassis material quality is the main area in which Acer has had to compromise in order to make the S13 more wallet-friendly. The quality of the plastics is good and everything is put together well, but as you’d expect, it doesn’t feel as premium as metal-bodied laptops. The hinge has decent torsion but the lid still wobbles, which is only going to be an issue when you’re working on the move.

The full-HD resolution on the 13.3-inch IPS display results in sharp images and text. Windows scaling tends to add some fuzziness to some apps and menus but nothing too distracting. Both, vertical and horizontal viewing angles are very good, and the matte finish of the display doesn’t cause reflections. 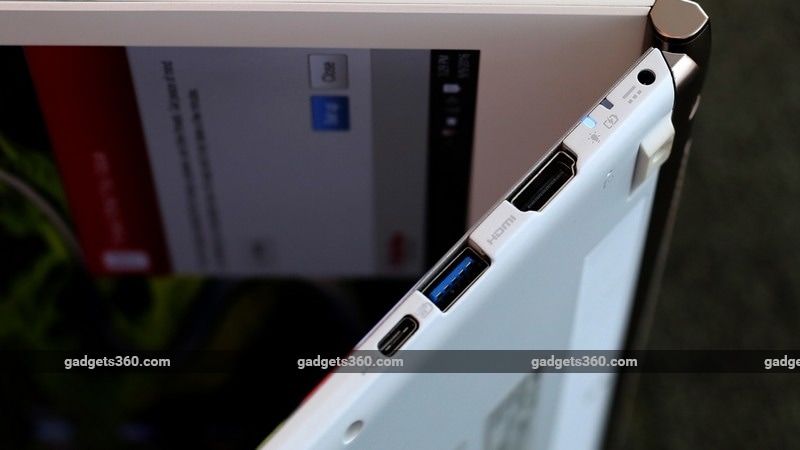 The Aspire S13 has a total of three USB 3.0 ports, one of them being a Type-C connector. You also get a headphone and microphone combo jack, an SD card slot, and an HDMI port. The status LEDs for power and charging are placed beside the charging port on the right.

We have a generously-sized trackpad that works well thanks to its smooth surface and buttons that are easy to click. The keyboard's chiclet keys have good spacing with just the right amount of travel for a comfortable typing experience. The backlighting is not even, and not all parts of the letters are lit up. This gets a little distracting when you’re typing so it’s better to turn the backlight off unless you absolutely need it. The direction keys feel a bit cramped too. 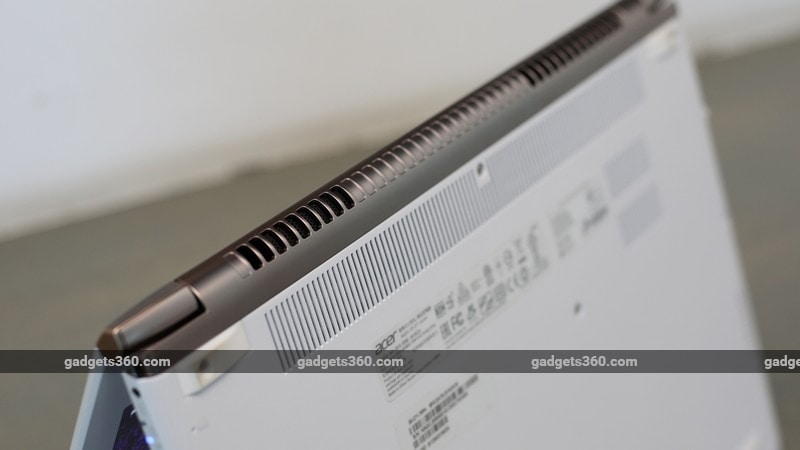 Air intake vents are placed on the bottom of the laptop and hot air is expelled through vents at the back, just below the hinge. Four rubber feet hold the laptop firmly in place when placed on a flat surface.

Acer Aspire S13 specifications and features
Our unit came with high-end Ultrabook specifications including an Intel Core i7-6500U CPU, 8GB of RAM, and a 512GB SSD. Also included are Bluetooth 4.0 and Wi-Fi b/g/n/ac with MU-MIMO support. The HD webcam produces sharp pictures with little noise and is ‘Skype for Business’ certified. The Aspire S13 comes with Windows 10 Home 64-bit along with the usual pre-installed software programs from Acer. 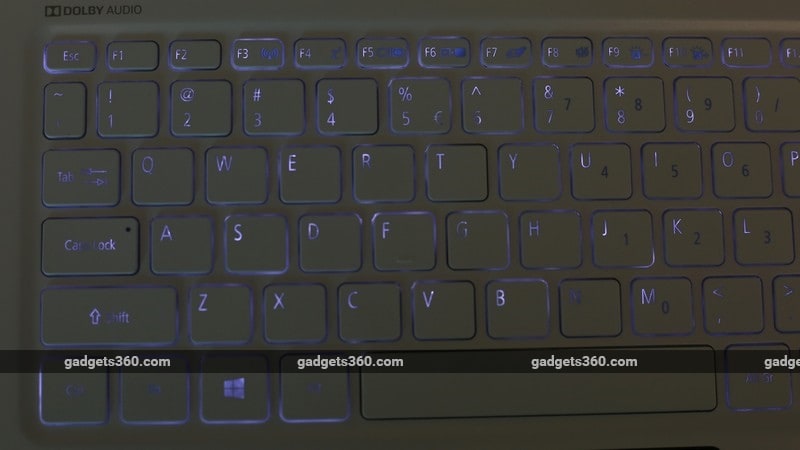 Acer Care Centre lets you clean junk files, update drivers and manage recovery; Acer Portal allows you to create your own private cloud for remotely accessing private data through apps like abFiles, abPhoto, etc; Acer Quick Access lets you toggle the blue light filter and USB charging when the laptop is off. Acer Explorer gives you a curated list of popular Windows Store apps. Other programs include Avast SecureLine, Office Mobile apps, McAfee LiveSafe, and a few universal apps like Netflix and Kindle.

Acer Aspire S13 performance
The Aspire S13 delivers very good performance for general usage and multitasking. Programs load quickly and boot times are good too. PCMark 8 returned scores of 3117, 3506 and 2990 in the Home, Creative and Work test suites. The onboard GPU is isn’t geared for gaming but just like the HP Spectre 13, the Aspire S13 does deliver playable framerates on some older titles. In Tomb Raider (2013), we managed an average of 24fps at the native resolution. Dropping the resolution a bit gives you smoother gameplay without losing out on quality too much. 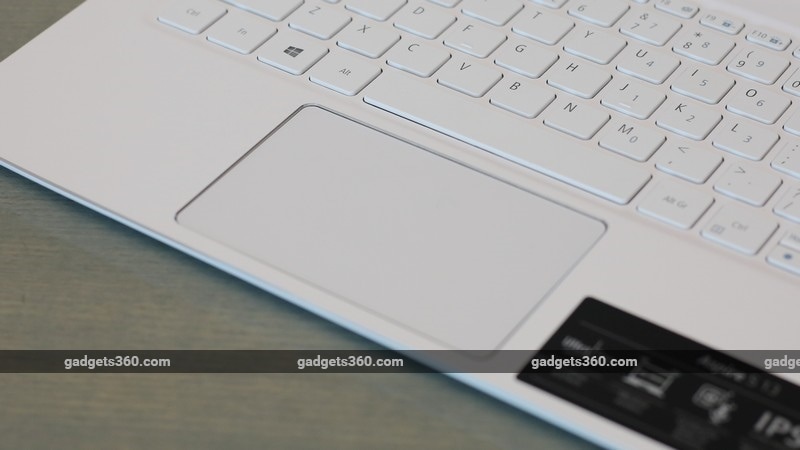 During the course of our test period, we didn't have any issues with overheating. The bottom gets warm after a bit of usage but not enough to make the device uncomfortable to use. The exhaust fan does get a bit noisy at full blast but this only happens when you’re doing something graphically intensive. The trackpad is a joy to use as multi-finger gestures work seamlessly. The keyboard is equally comfortable but as we stated before, the uneven backlighting of the keys can be distracting.

We enjoyed using the Aspire S13 for watching movies thanks to the very good speakers. They’re placed on either side of the laptop and are bottom-firing, which amplifies the sound a bit when the laptop is placed on a flat surface. There’s also Dolby Audio software enhancement, which helps. There are instances when the output tends to sound hollow, in which case, switching off ‘Sound Virtualiser’ helps a bit. 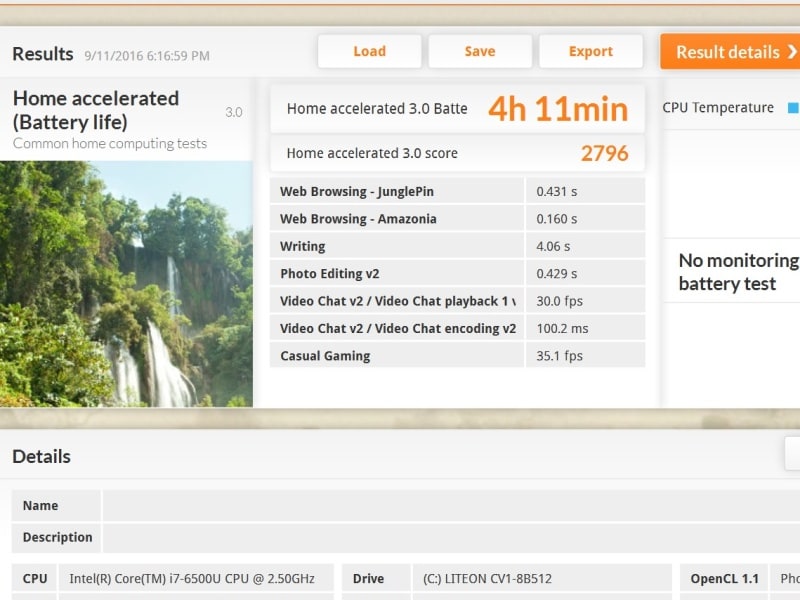 Battery life is good for casual usage but not great if you’re a power user. In Battery Eater Pro, we managed to get 1 hour and 55 minutes of battery life, which translates to roughly 4 hours of real world usage. This was attested by PCMark 8’s battery test, which gave us 4 hours and 11 minutes of mixed usage including Web browsing, editing word documents, photo editing, video chatting and light gaming. However, for casual usage like watching movies and Web surfing, we were able to get nearly 7 hours of battery life. 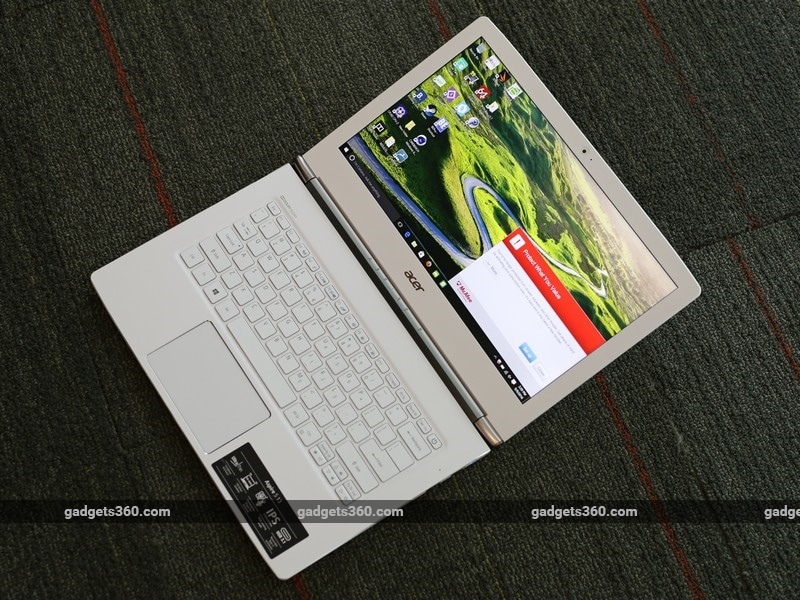 Verdict
The Acer Aspire S13 (S5-371) is priced at Rs. 83,999 and has a 2 year warranty, which is quite aggressive considering the specifications and overall dimensions of the laptop. The S13 also has a good display and a powerful set of speakers which make it good for multimedia playback. If you're looking for this model online then chances are you won't find it, since it's currently only being sold through physical retail stores.

With most premium Ultrabooks boasting of aluminium or carbon fibre bodies, the S13 has to make do with plastic, which is the only real downside to it. Coupled with the white colour which stains pretty easily, it simply doesn’t feel like a premium Ultrabook.

If you don’t care much about aesthetics though, there shouldn't be anything holding you back from buying this laptop and saving some money. If you want flagship Ultrabook performance for Rs. 1,00,000, the Acer Aspire S13 (S5-371) is currently your best bet.

Further reading: Acer Aspire S13, Acer Aspire S13 review, Acer Aspire S13 specifications, Acer Aspire S13 price, Acer Aspire S13 price in India, Ultrabook, Windows 10 laptops
Roydon Cerejo Email Roydon
Roydon Cerejo writes about smartphones and laptops for Gadgets 360, out of Mumbai. He is the Deputy Editor (Reviews) at Gadgets 360. He has frequently written about the smartphone and PC industry and also has an interest in photography. With over a decade of experience covering the consumer technology space, he is also an avid sci-fi movie and TV show geek and is always up for good horror flick. Roydon is available at roydon@gadgets360.com, so please send in your leads and tips. More
Google Parent Alphabet and French Drugmaker Sanofi Set Up Diabetes Joint Venture
Trai Debunks COAI Allegations, Seeks Apology