Gone are the days when you had to make a lot of compromises when shopping for a mainstream laptop. Today, you can find some pretty good deals for around Rs. 35,000. These laptops offer high-resolution displays, plenty of storage, and decent processing power.

This is also usually the lowest price at which you'll be able to find Intel's 8th Gen Core i3 CPUs. The Acer Aspire 3 (A315-53-317G) is one such laptop with an MRP of Rs. 36,000 but it can actually be found selling for closer to Rs. 30,000, or at times, even lower. This makes it one of the lowest-cost laptops with an 8th generation Intel Core i3 processor in this segment in India.

Let's see how good this laptop is, and whether it could be the best option at around Rs. 30,000.

The Acer Aspire 3 series has pretty basic build quality and design, which is typical for laptops in this price segment. It's only available in black and the entire outer chassis is made of plastic, but it feels sturdy and doesn't look too cheap thanks to the horizontal stripes on the lid and palm rest.

The lid does flex slightly in the middle when it's closed so you might want to be careful about placing anything heavy on top of this laptop. The laptop has slightly curved sides, so you don't feel any sharp edges when holding it.

The single hinge provides good torsion for the lid, minimising wobble when you use the laptop in a moving vehicle. The lid also has the ability to tilt 180 degrees backwards, so you have good flexibility in what position to use the laptop.

The 15.6-inch display on the Acer Aspire 3 has a full-HD (1080x1920) resolution, for a decent level of sharpness. It's a standard LCD panel, which means the vertical and horizontal viewing angles aren't very wide. There's also a noticeable shift in brightness and colours when viewing the display off-axis. The display has thick borders all around, but this isn't a big complaint especially at this price. 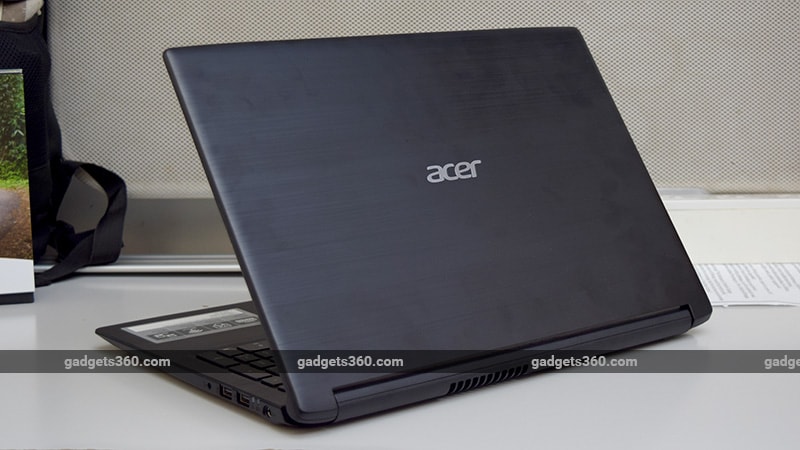 The Acer Aspire 3 has a good selection of ports. There are a total of three USB ports, of which two are USB 2.0 and one is USB 3.0. You also get Gigabit Ethernet, a full-sized SD card slot, HDMI, and a 3.5mm headphone and microphone combo socket. The laptop has two LED indicators on the left for power and hard disk activity. The battery is non-removable. On the bottom, there are plenty of air intake vents but you also get two quick-access panels for the RAM and hard drive, which is very thoughtful.

The keyboard area is spacious with ample room on either side for you palms. You get a full-sized keyboard with a number pad. The chiclet keys are well spaced, and have soft tactile feedback so they aren't noisy. There isn't any backlighting though. The trackpad has a smooth texture and the left and right buttons don't require much effort to use.

In the box, the Aspire 3 ships with a 45W charger and some manuals. Overall, the Aspire 3 is decently built and our black review unit looked alright. It does feel a little heavy at 2.1kg, and is a bit too large to be carried around comfortably.

The Aspire 3 is powered by an Intel Core i3-8130U, which is a dual-core CPU with HyperThreading and a base clock speed of 2.2Ghz. Compared to its direct predecessor, the Core i3-7130U, the new 8th generation CPU has Turbo Boost which can dynamically boost the frequency to 3.4GHz. Since this is a budget laptop, we have to make do with the integrated GPU, which is the Intel UHD 620.

This laptop has 4GB of DDR4 RAM, a 1TB mechanical hard drive, Wi-Fi 802.11ac, Bluetooth, and a VGA webcam. One of the panels on the bottom lets you access a free RAM slot. According to the diagnostic tool CPUz, the pre-installed 4GB RAM module seems to be soldered on. 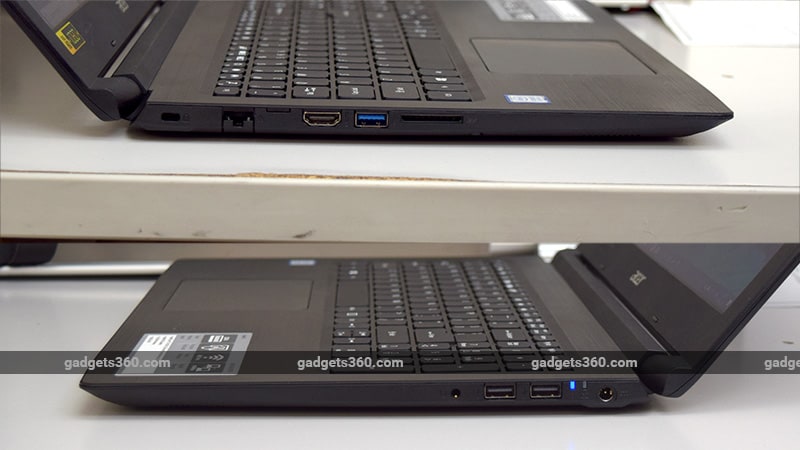 The Acer Aspire 3 uses Windows 10 Home 64-bit, which comes with the usual Windows Store apps preinstalled. You also get some third-party programs such as a 30-day trial version of Norton Security and a full version of Microsoft Office Home and Student Edition.

Acer also preinstalls some of its own programs. Care Centre lets you check the health of your hard drive and battery, and keep your system drivers up to date. You also get full versions of Cyberlink's PowerDirector and PhotoDirector for video and photo editing respectively.

Despite not having an SSD, general Windows performance is not as bad as we were expecting. It still takes a while to boot into Windows, but once everything is loaded, the experience is workable. There's a bit of lag when switching between apps, opening programs, and even opening menus in the Windows UI.

A lot of this could be fixed by adding some more RAM. The Aspire 3 doesn't run hot either, and the exhaust fan is only audible when running really intensive tasks such as playing a taxing 3D game or encoding a video.

The Aspire 3 isn't the best laptop for multimedia usage. While it doesn't have an issue playing high-resolution video files, the display doesn't have a vibrant colour palette. Due to the narrow viewing angles, even animated films didn't look very engaging to us.

There's decent spatial separation from the stereo speakers, but they don't get very loud. The webcam is another disappointment. The resolution is only VGA and the sensor is weak, producing grainy and blurry images even in a well-lit room. 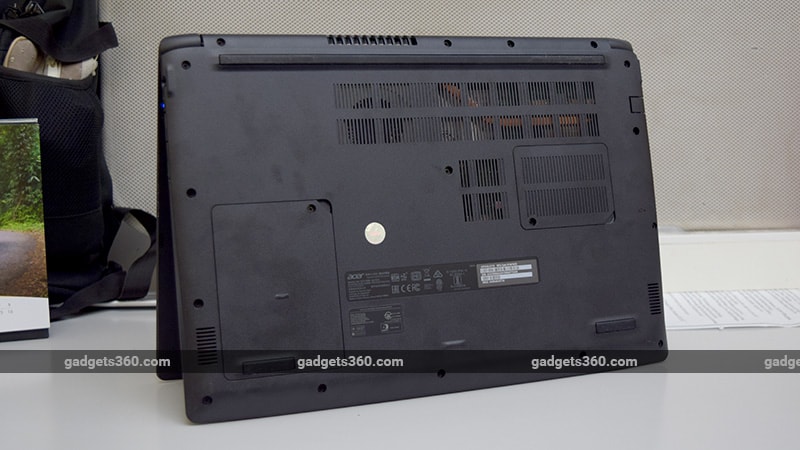 For a budget laptop, the Acer Aspire 3 does a decent job in benchmarks. In the syntheticPCMark 10 test, we got an overall score of 2,318 points, and in 3DMark's Night Raid test, we got a score of 3,524. The laptop also performed adequately in real-world tests. Compressing a 3.2GB folder of assorted files using 7zip took 7 minutes and 22 seconds, while encoding a video to MKV using Handbrake took 2 minutes and 52 seconds.

Most casual 3D games from the Windows Store such as Asphalt 9: Legends run just fine even with the graphics preset set to ‘High'. Heavier titles didn't play nice, and we honestly weren't expecting them to either. For instance, Rise of The Tomb Raider struggled to load properly, even after dropping the resolution and graphics settings all the way down.

The Acer Aspire 3 has a 4,810mAh battery, which is rated to deliver up to 7 hours of runtime. In our heavy Battery Eater Pro test, the laptop ran for 2 hours and 31 minutes, which is decent. With real-world usage, which typically involved using browser-based apps, watching videos and playing Asphalt 9: Legends, we managed to get roughly four hours of runtime.

Playing the game made a big dent in the battery life, so if you'll be using this laptop primarily for Web browsing or simple offline programs, you should be able to get an hour or two more out of the battery. Overall, we would say battery life is decent, provided you stick to non-intensive tasks.

Verdict
At the time of this review, we could find the Acer Aspire 3 (A315-53-317G) selling for as little as Rs. 28,490 on Amazon, which is very good value. For this money, you get a recent Intel CPU, fairly good build quality, a full-HD display, a comfortable keyboard, and decent battery life when doing non-intensive tasks. Acer also gives you easy access to the RAM and hard drive, which is not something we see too often in this segment.

A few things we wish had been better are the display, which has weak colour reproduction and narrow viewing angles, and the webcam, which produces sub-par images even under good light.