Computex 2019: AMD, Intel, Asus Bring the Energy Back to PCs and Hardware

As Computex 2019 draws to a close, we reflect on one of the most lively and action-packed weeks in recent years. 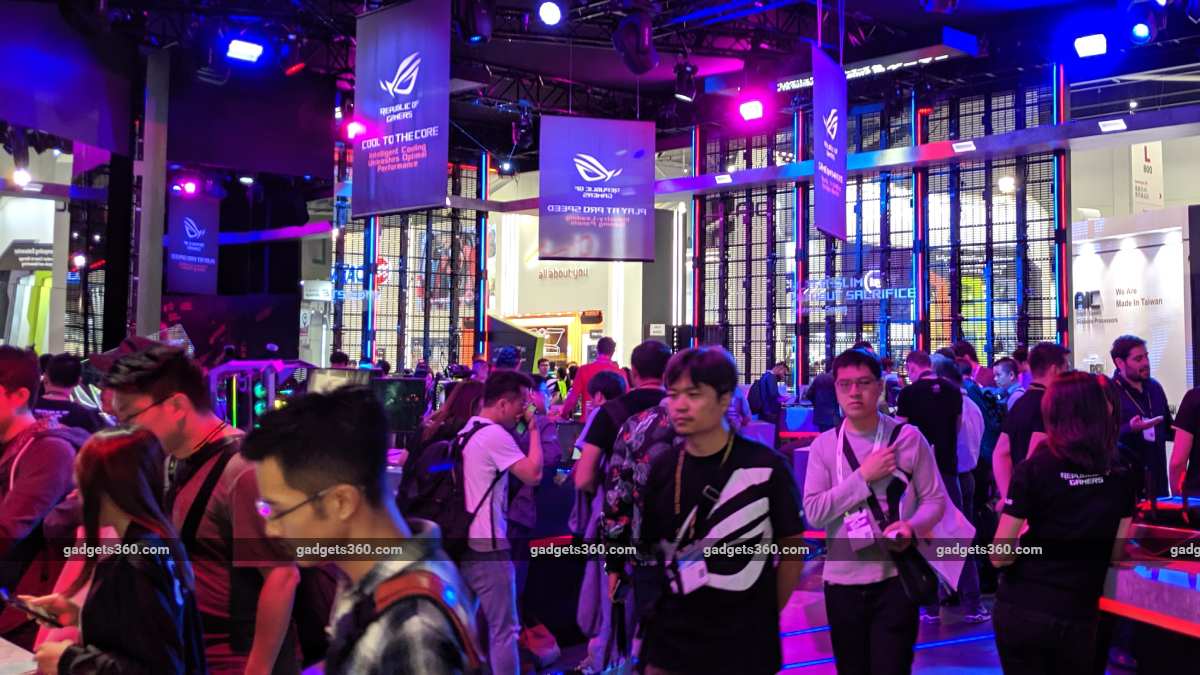 The Asus ROG booth was one of the largest and most crowded on the Computex 2019 show floor.

Computex, the world's biggest computer hardware trade show, has been in somewhat of a slump for the past few years. As excitement has shifted out of the PC hardware arena towards smartphones and similar gadgets, I've seen the show reduce in size, with smaller and smaller crowds at the show floor and entire halls lying empty at the Taipei World Trade Center.

This year, though, with both AMD and Intel locked in battle as they prepare to launch their next-generation CPUs and GPUs, PC enthusiasts had plenty to cheer about. Before the Computex show floor officially opened, the two companies set the stage for a series of showdowns that will play out across multiple market segments over the next few months and years.

Even before AMD CEO Dr Lisa Su could kick off the show with her keynote, the first thing scheduled on Monday morning, Intel decided to try and steal a little thunder with a surprise preview. Late on Sunday night, Intel unveiled performance numbers for the upcoming 10nm ‘Ice Lake' CPU architecture, specifically its integrated Gen11 GPU, and announced a “special edition” Core i9-9900KS processor that can Turbo at up to 5GHz.

While details were scarce and a company's own internal tests are obviously conducted under ideal conditions using favourable metrics and parameters, Intel's swagger definitely made us sit up and take notice. After close to five years' worth of delays bringing 10nm chips to market, it's interesting to see this level of confidence even though many questions remain unanswered.

It was then AMD's turn, and there was a celebratory atmosphere in the air as Su delivered exactly what the audience was there for – details of the Radeon Vega GPU series, and the Ryzen 3000 desktop CPU series. We got confirmation that Vega will be based on a significantly different underlying graphics architecture called RDNA (for Radeon DNA), and that multiple GPU models will be launching on June 10.

We then learned detailed specifications as well as prices for some of the 7nm Radeon 3000 series CPUs, which will launch on July 7. AMD also showed off live benchmarks, which is always a good sign. If there was one disappointment, it was the fact that Su announced only a 12-core CPU, not a 16-core model as was heavily rumoured (and is technically feasible). Still, some surprises might still be in store for the actual launch.

AMD also hyped up its platforms' support for PCIe 4.0, the next version of the PCI Express standard for internal communications between a PC's major components. By doubling the throughput of PCIe 3.0, AMD has stolen a significant lead. This isn't just a theoretical advantage either; PCIe 4.0 SSDs were also shown off at Computex this year, and Radeon Vega GPUs will be PCIe 4.0 native without losing any backward compatibility.

AMD showed off a variety of X570 motherboards from multiple manufacturers

While AMD didn't make a big deal of formally announcing the new X570 chipset for Ryzen 3000 series CPUs, all major motherboard manufacturers had several new models on display, and I later saw quite a few PCIe 4.0 SSDs scattered around the show floor. Asus, Gigabyte, MSI, and ASRock will all be ready to ship these products as soon as the CPUs go on sale.

Back to Intel, and on Tuesday afternoon Gregory Bryant, GM and SVP of the company's Client Computing Group delivered his own keynote where he formally announced that Ice Lake CPUs are now shipping to laptop OEMs, and that devices will go on sale by the end of this year.

And while AMD largely sat back after making its big splash on day zero, Intel kept the momentum. On Wednesday morning, we got our first look at the new ‘Honeycomb Glacier' dual-screen laptop concept design as well as several others. We then got more concrete updates about the Project Athena laptop initiative, and heard more about the recently launched Graphics Command Centre software at an Intel Odyssey gaming community meetup.

Of course one of the biggest names at Computex each year is Taiwan's own Asus, and the company takes great pride in unveiling its most creative and ambitious efforts on its home turf. This year's showstopper was the ZenBook Pro Duo UX581, which along with the smaller ZenBook Duo UX481 sports a large second screen to help people be more productive.

I was able to spend some time with the ZenBook Pro Duo and ZenBook Duo, and I found the implementation of the second screen to be much more practical than last year's ScreenPad monitor-trackpad hybrid. I think this is much more than a gimmick and I can't wait to see how software developers take advantage of it.

As it turns out, Asus isn't the only one working on such a concept. Intel says a lot of companies have expressed interest in its dual-screen concepts, and while the final form factors are likely to vary to suit different purposes, we can expect to see more such devices in the near future.

Given the positive responses that Asus has received, I think other brands will soon get on board — I just hope there isn't too much fragmentation in terms of secondary screen size, placement, and functionality. This could be the first major new type of PC form factor we've seen in a long time, and we can expect dual-screen laptops to carve out a niche for themselves, just like there are 2-in-1s today.

Asus also pushed out a slew of new ZenBooks, VivoBooks, ROG gaming laptops, ExpertBook and ExpertPC devices for pro users, plus monitors, routers, headsets, motherboards, and various other components. Last year's ScreenPad feature, exclusive to the high-end ZenBook Pro series, has been improved and enlarged, and will be offered even on mid-range VivoBook models.

Of course plenty of other companies also had interesting news and products. Gigabyte and Corsair are leading the way with functioning PCIe 4.0 SSDs, but others are showing off mockups. Nvidia's Studio RTX laptops are a direct shot at MacBook Pro loyalists, and there's clearly a market for more powerful mobile machines. Curiously, the “Super” GeForce teaser that Nvidia did not relate to any announcement that was made, and I heard whispers that the product just wasn't ready in time to be shown — though we still have no idea what that would have been.

Gigabyte's Aorus PCIe 4.0 SSD requires copper heatsinks on both sides of the PCB

Qualcomm and Lenovo's concept Snapdragon 8cx-powered 5G laptop won't be coming to India anytime soon, but shows some momentum in the Windows on ARM space. Speaking of which, ARM itself showed off its next-gen flagship core and GPU designs. Dell is one of the few non-Asian OEMs to have a major Computex presence, and the company unveiled several new XPS, Inspiron and Alienware laptops.

Corsair will be bringing a massive new range of DIY liquid cooling products to India this year. The Hydro X-series has dozens of parts, including multiple varieties of stiff and flexible pipes, joinery, fluids, pumps, CPU/GPU blocks, reservoirs, and radiators. Building a custom liquid cooling loop from scratch is not for the faint of heart, and is not common in India, so it will be interesting to see how the enthusiast market responds to this.

As I walked around the five main show floors and dozens of private venues, I saw a few interesting things, but not really enough to amount to any major trend. Smaller brands are clearly getting in on the mesh Wi-Fi game and Chinese suppliers are keen to offer ready-made solutions for companies to distribute. Similarly, I expected to see lots of truly wireless earphones, but there were only a few.

USB 3.2 is starting to make an appearance, and I saw a few products that explicitly promised 20Gbps transfer speed as well as several that might or might not offer that full capability. RGB LEDs were everywhere as usual, though at least they weren't the most important new feature that any brand had to talk about. I did see RGB LED gaming chairs, as well as pen drives, SSDs, and hard drives.

I saw plenty of China-made wireless charging accessories, USB Type-C and Thunderbolt hubs and adapters, gaming peripherals, and tools, as well as components such as OLED panels, hinges, and buttons that PC system integrators or importers can buy in bulk to resell around the world.

In all of this, what stood out most about Computex 2019 was how little of the action now takes place on the show floor. Every company wants to have its own private suite in a hotel and hold its own press conference, rather than unveiling products at the exhibition itself. While visitors might still see lower attendance and fewer companies at Computex now than in years past, they're still around if you know where to find them, and this year they were optimistic again.

Disclosure: Asus sponsored the correspondent's flights and hotel for the Computex trade show in Taipei.