Computex 2018: Few PC Components, but Some Spectacular Gadgets Save the Day

After a few years of struggling to find its footing in a changed world, Computex 2018 seemed to be somewhat back on track, in terms of energy and purpose. The annual event in Taipei, Taiwan, is still not what it used to be in terms of size and scale, and several companies are now participating only from the sidelines, but it was a week packed with things to see and do. In fact, there was more happening off the show floor than on it, which meant a lot of running around. While companies might prefer private events to large-scale trade shows, they can't realistically gather so many people in the same place at the same time on their own.

For the first few days, Computex 2018 was essentially "The Asus Show". The Taiwanese giant put on two separate press events for its Republic of Gamers sub-brand and its mainline products, and each had at least one major showstopper. That was following a full day of behind-the-scenes previews for the media, which helped prevent the rest of the products from being overlooked. Asus is one of Taiwan's best-known companies, and no matter what it might bring to other global stages, such as CES or MWC for the first time this year, Computex happens on its home turf and will always represent a level of prestige for it.

The main event on Monday was the unveiling of the Asus ROG Phone, an interesting product that will hopefully make it to market at just the right time to capitalise on PUBG and Fortnite fever. It isn't too heavy or bulky, but how well it handles normal smartphone duties, particularly photography, remains to be seen. It uses the industry-leading Snapdragon 845 processor and has an AMOLED panel with a claimed 1ms response time, plus pretty much any top-end specification you can think of. Of course it also has to have RGB LEDs, and aggressive styling with sharp angled lines and orange grilles at the back.

The thing that perhaps stood out the most is that there are already three accessories for the smartphone. These aren't the usual cases and headsets either; each has a very specific purpose, which means that some work has already gone into building an ecosystem around this product. Razer, ZTE and Xiaomi are also developing gaming-centric phones but Asus is the only one so far to indicate the possibility of a launch in India, and that too not very far down the line.

It will be interesting to see how Asus times the launch of the ROG Phone in India, and how it affects the positioning of the flagship Zenfone 5z, which was expected to have been launched in India by now.

The morning after the ROG Phone launch, Asus took to the stage yet again to unveil a slew of products, ranging from the surprisingly useful Vivowatch BP to the curious Project Precog concept laptop. By far the most attention-grabbing were a pair of new ZenBook Pro laptops with touchscreens for trackpads - you can read all about them in our first impressions, but in short, the implementation is unnecessarily complicated and the concept might not turn out to be as good an idea as it seems.

Project Precog was shown off on stage and then again behind barriers, but there were no live demos. Clearly, it isn't ready for hands-on demos yet, and we're left wondering what exactly it can do with its AI hardware and software. We've seen this kind of dual-screen design before, but maybe the use of an Intel Movidius Vision Processing Unit and other innovations will make this kind of device genuinely useful.

Speaking of Movidius, this was one of very few Intel demonstrations at a private venue off the main show floor. We saw a prototype Movidius unit in the form of a simple USB 3.0 stick (albeit designed with a fairly large heatsink) running real-time face and object detection on, of all things, a Bollywood action movie trailer. The idea was to show how multiple live video feeds can be analysed simultaneously in real-time, which is a big data scenario that many companies and governments are very interested in right now. We'll be keeping an eye on this as an emerging tech product category, and it isn't hard to imagine that Movidius tech will eventually be integrated into Intel's CPUs (or GPUs). 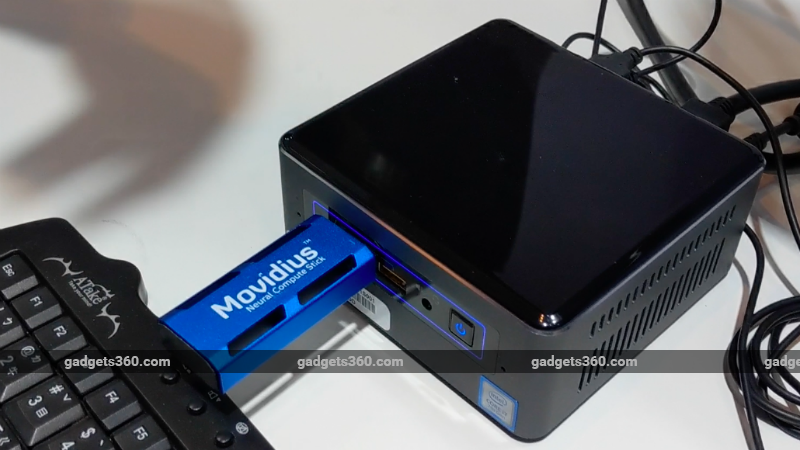 Intel also launched its Core i7-8086K processor, an homage to the original Intel 8086, on that iconic piece of hardware's 40th anniversary. This chip can reach 5GHz on a single core, a far cry from the original's 5MHz. It should be popular with enthusiasts, but it's a limited edition and we're still expecting 8-core Core i7 CPUs this year, which makes this chip more of a collectors' item than a serious reason to upgrade.

Unfortunately, Intel decided to try and pip AMD's 32-core second-gen Threadripper announcement by demonstrating an unnamed 28-core CPU running at 5GHz too - except that the company skipped mentioning the overclocking and industrial-sized external cooler that were required for the demonstration; details that emerged in the days following the show. We also got a new Optane SSD and a few roadmap updates, but no actual launches.

AMD did much of the same, announcing future plans and showing off a few prototypes, but not actually launching anything. The most interesting points were the growing number of Ryzen and Ryzen Mobile OEM systems, and the quick ramp up of 7nm fabrication technology for GPUs - first to be seen in workstation products, but definitely coming to consumer GPUs.

Nvidia CEO Jen-Hsun Huang hosted a small gathering where he spoke informally and personally handed out sandwiches to attendees. With no mics or teleprompter, he laid out a vision for the company's AI, robotics, and supercomputing efforts. Gamers were left wanting, with zero news about the company's next GeForce series products. 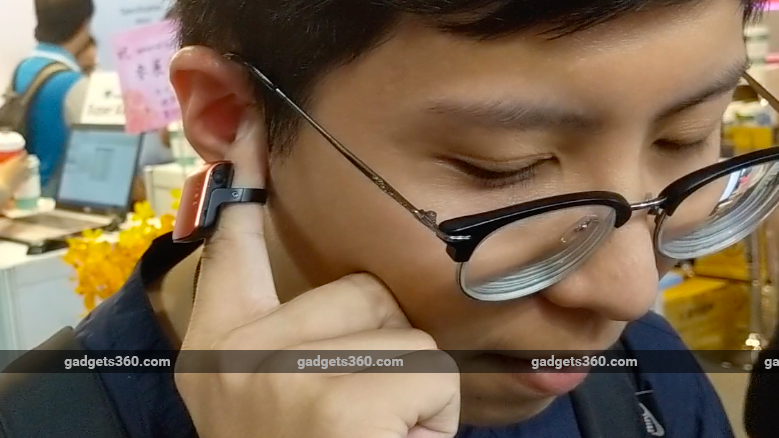 With none of the big three - Intel, AMD, and Nvidia - announcing new platforms, the Taiwanese hardware companies had little new to show off. Asus, Gigabyte, MSI, ASRock and Biostar are the biggest names in motherboards, and then there's Zotac, Galax, Palit, Inno3D, Powercolor, and several others in the graphics card business who had to fill their booths with other or just older products.

MSI focused on laptops and desktops, many of which will be making their way to India soon. Interestingly, the company hopes to break into the mainstream laptop market rather than just focusing on gamers. Gigabyte also has a new direction, and will be bringing in SSDs, RAM and power supplies - in its words, you should be able to build a PC with everything except the CPU built by Gigabyte. Zotac's MEK 1 gaming PC which was shown off last year has only recently gone on sale in India, and will soon be joined by the surprisingly small yet powerful MEK Mini, and the enormous MEK Ultra with all the bells and whistles.

GPU supply and prices are easing up globally, and so companies were not afraid to show off big, bold all-in-one crypto mining machines. MSI and Biostar had the biggest arrays on display, and this gives us a fair idea of just how easy it's becoming for anyone with a little seed money to jump into the mining game.

Elsewhere on and off the show floor, there were smaller interesting tidbits that caught our attention. Asus had a triple-monitor gaming setup that used prisms to completely eliminate the borders between screens. You have to be looking at it at just the right angle, but it worked beautifully. ECS surprised us with a palm-sized mini PC, the Liva Q2, based on Intel's latest low-power Pentium Silver processors. Corsair and Cooler Master both had a few interesting PC cabinet designs. Kingston's HyperX portable SSD for game consoles should speed up load times, which will interest plenty of people. A startup called Origami Labs was showing off an (admittedly bulky) prototype of its Orii bone conducting ring, which lets you take phone calls privately just by touching your ear canal, rather than constantly putting in or taking out a headset. 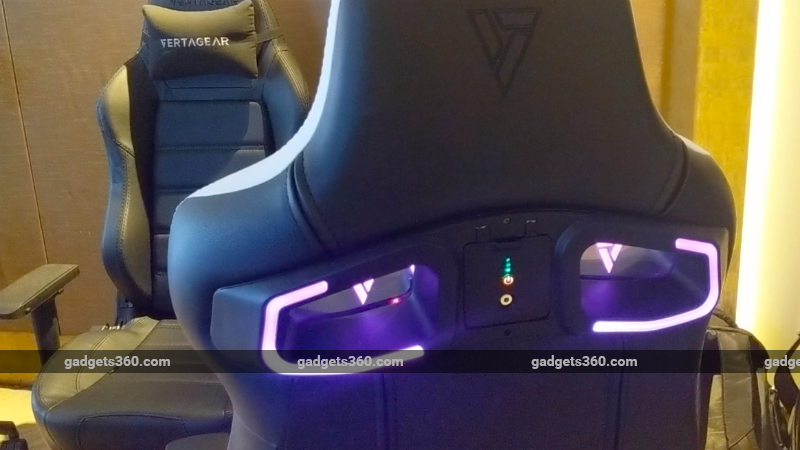 Last year, we despaired that the only things companies were talking about were gaming chairs and RGB LEDs. Both trends continue, and this year Asus has put LEDs on an external hard drive, while Kingston has gone a step further with an internal SSD that no one is likely ever to see. But we also found the holy grail - one company, the relatively unknown Vertagear, was showing off its latest LED-infused gaming chair. It's actually not just for show - using software from NZXT, it can sync up with some games and use different colours to show you and your teammates' current health or the status of in-game items.

With that little touch of whimsy, we closed out Computex 2018. It's still one of the world's largest and most important gatherings of PC and gadget manufacturers, but without Asus as its tentpole, there wouldn't have been a lot that was actually new this year. If the Taiwanese hardware can't count on new generations of PC hardware to be ready for Computex as was once the norm, they at least need to work on putting up a cohesive show rather than just letting everyone come up with their own plans.

Disclosure: Asus sponsored the correspondent's flights and hotel for the trip to Computex in Taipei.

Computex 2018: Few PC Components, but Some Spectacular Gadgets Save the Day
Comment