Zotac has announced the India price and availability of its VR GO backpack computer, which made waves across the world when it was unveiled in early November. The VR GO will be available online in India via Prime ABGB by the end of December, priced at Rs. 1,74,999. The mini computer went on sale in other regions priced at a hefty $1,999.99 (roughly Rs. 1,36,700), and the company has finally revealed complete specifications.

To recall, the Zotac VR GO is actually a mini PC that comes with detachable straps. This, alongside a removable battery pack, enables it to be carried like a backpack, and also enjoy virtual reality (VR) content on the go. The specifications of the system include the beefy Nvidia GeForce GTX 1070 graphics card with 8GB of GDDR5 video RAM, making it more than capable of handling the demanding graphics required for the output of VR content. 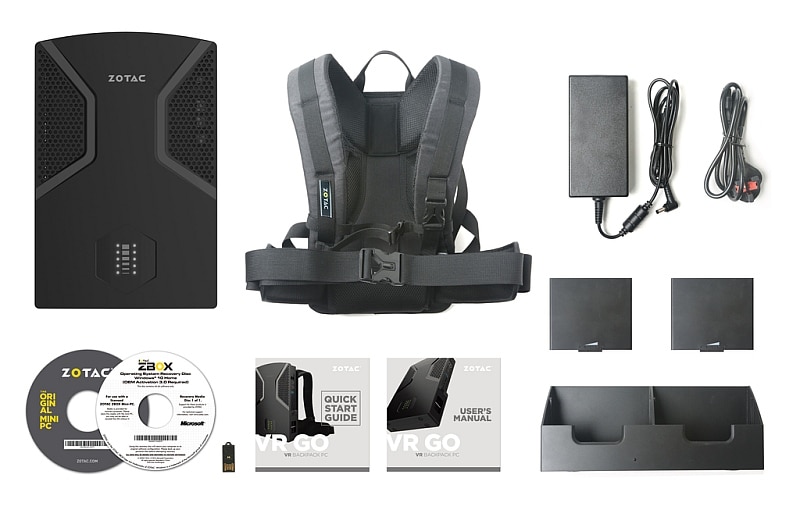 Apart from a well-endowed graphics card, the Zotac VR GO mini PC is powered by a 2.8GHz (up to 3.6GHz) quad-core Intel Core i7-6700T processor. The company is also using a "proprietary low-profile air cooling system" to keep the entire machine cool. The two 6600mAh batteries in the battery pack provide up to 2 hours of play time, the company says, and points out that they can be hot-swapped when it runs out. It weighs 4.95 kilograms, and comes with Windows 10 Home pre-installed.

Other specifications include 16GB of DDR4 2133MHz RAM (up to 32GB) and a 240GB M.2 PCIe SSD (with another 2.5-inch SATA 3.0 slot for upgrades). In terms of I/O options, the VR GO packs three HDMI 2.0 ports, two DisplayPort 1.3 ports, two USB 3.0 Type-A ports separate from four other USB 3.0 Type-A ports, two GbE ports, an SD card reader, and two 3.5mm headphone jacks. As for wireless connectivity, it offers Wi-Fi 802.11ac and Bluetooth 4.2. The display ports together can power up to four displays, excluding the VR headset.

Further reading: Zotac, Zotac VR GO, Zotac VR GO Backpack, PCs
Abhinav Lal Email Abhinav Abhinav Lal is News Editor at Gadgets 360 and has been tracking all things tech for over a decade now. He has written extensively on a range of topics including apps, gaming, mobiles, PCs, and Web services in his tech journalism career. Apart from editing news, he also works on reviews and features, while taking care of the product side of things at Gadgets 360. Write to him at abhinavl@ndtv.com or get in touch on Twitter. You will most likely find Abhinav editing stuff for Gadgets 360, ...More
Reliance Jio Money to Roll Out to Merchants From Monday
Super Mario Run, The Last Guardian, Dead Rising 4, and More Games Releasing in December