Analytics firm Netmarketshare has published its latest set of statistics regarding desktop and mobile OS adoption, revealing that Windows XP is still widely used today, even with just over a month to go for Microsoft to pull the plug on extended support for the twelve-year-old operating system.

Ars Technica cites Netmarketshare data which shows Windows XP still holding out at 29.53 percent, even though Windows 7 is the current most popular desktop OS, with a market share of 47.31 percent. Windows 8 and 8.1 now account for slightly over 10 percent of the market, at 6.38 and 4.30 percent respectively, continuing their slow uptake velocity.

The venerable OS will still be in second place when extended support ends on April 8. The figures are concerning because  there will be no further security updates, leaving users vulnerable to new threats. According to Microsoft's guidance to customers still running Windows XP, corporations will risk losing accreditation from external auditing bodies and having their security certificates suspended. The company also warns that corporations might not be able to adequately protect their own systems and their customers' data.

Software and hardware manufacturers are also in the process of deprecating support for Windows XP. New devices are unlikely to ship with drivers for XP and new versions of popular software programs might not install at all. Web services might enforce the use of more modern browsers, which are not supported either.

Home users can continue to use XP, but should be aware that there will be no further security updates, and that they will thus become more tempting targets for scammers and malware creators.

Microsoft will push an update to Windows XP PCs on March 8 which will cause users to see a popup informing them of the impending support deadline and urge them to upgrade. it has also created a special website, www.amirunningxp.com, which explicitly informs users who don't know which OS or version they are running, that they might be at risk. The website even has a countdown timer, just to drive the point home. 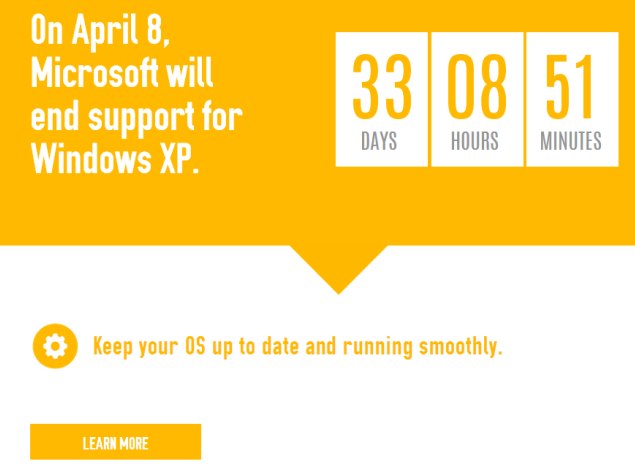 Meanwhile, Microsoft's corporate website offers information for businesses about upgrading to Windows 8 as well as Windows 7, in case the newer OS is too different for users to feel comfortable with. Microsoft Office 2003 will also reach end-of-life status on April 8,

Windows XP has remained in use in part due to negative public perception of its successor, Windows Vista which broke compatibility with older hardware and software, and in part due to global financial troubles that have led to large corporations delaying PC upgrades and replacements. A large number of applications also still require Internet Explorer 6, which became widely popular thanks to Windows XP, but is now barely able to support current development standards.

XP remained the world's most widely used desktop OS till August 2012, when it was finally pipped by Windows 7, but the two remained within 10 percentage points of each other for another year, according to historical data from Netmarketshare. It was only in the second half of 2013 that Windows XP usage dropped off significantly. Even so, its decline hasn't been steady: in fact the February 2014 figure was actually 0.23 percentage points higher than the January 2014 figure.